TMC has allegedly lodged 63 complaints with the EC, which the Bengal CM alleges the Commission has ignored. 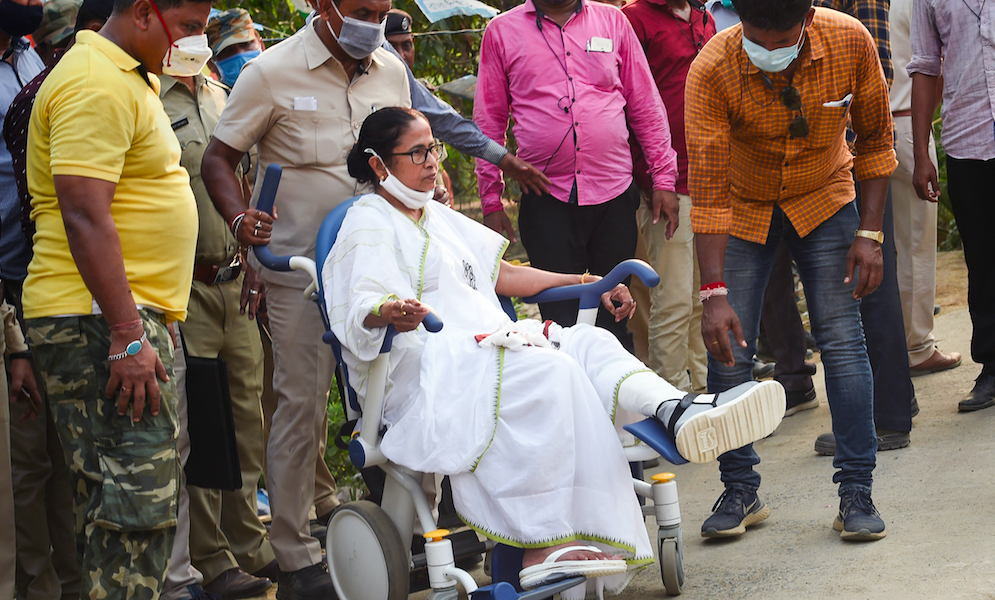 At around 3.45 pm, she was helped out by police and Central forces. Reporters, security forces and bystanders swarmed the rural school, resulting in scenes of unprecedented poll-day drama in such a rural setting.

Banerjee visited several other booths across the constituency, where local TMC leaders complained that their election agents were not being allowed to enter booths. The chief minister visited polling centres at Sonachura, Reyapara, Balarampur, Boyal, Nandigram block 1 and 2.

“We have lodged 63 complaints since morning. But no action has been taken. We will move court over it. This is unacceptable,” the chief minister, who sat in a wheelchair outside booth 7 in Boyal in Nandigram.

In Boyal, villagers had alleged that BJP supporters had stopped them from going to polling booths. As Banerjee reached the school, BJP supporters shouted “Jai Shri Ram” slogans.

A huge police contingent was rushed to the spot to control the situation, after which the crowd dispersed. Banerjee, however, stayed put inside the school and demanded re-polling in booth number 7.

“The person who has stood from BJP here has been conducting enormous ruckus in the region for the last 24 hours and through the night,” she told reporters after coming out of the booth, referring to Suvendu Adhikari, her former trusted lieutenant who is now BJP’s high-profile candidate.

“The home minister himself is stopping the CRPF, CAPF and other jawans from doing their work. Outsiders, who cannot speak Bengali, have occupied the area,” she said.

The West Bengal chief minister pointed out that prime minister Narendra Modi was addressing Bengal people on a poll day (from Jainagar, which is not going to polls today) and resources like Doordarshan were being unfairly devoted to him.

“TMC will win 90% of the votes in Nandigram,” Banerjee said.

Banerjee, notably, also reportedly made a telephone call to Governor Jagdeep Dhankar from the booth with the complaint that BJP was fomenting violence. Dhankar and Banerjee have sparred on numerous occasions.

Issues flagged @MamataOfficial a while ago on phone have been imparted to the concerned.

There is full assurance of the concerned to adherence to rule of law.

Am confident all will act in right spirit and earnestness so that democracy flourishes.

The TMC leadership also claimed that party activists were beaten up by BJP supporters elsewhere too. Adhikari has denied the allegations levelled by the TMC and claimed the ruling party has sensed defeat.

Adhikari’s convoy was allegedly attacked with stones at two places while he visited booths in the assembly constituency.

His motorcade was also gheraoed as TMC supporters shouted slogans against the BJP leader.

Security forces patrolling the area dispersed the mob, making way for his convoy.

“I am used to such protests by TMC goons. They are all followers of Mamata begum (Banerjee). Let them do whatever they want till the results are out on May 2,” Adhikari told reporters.

The Nandigram constituency has been placed under Section 144 to avoid any untoward incident.