Najeeb Ahmed Investigation to Be Handed Over to CBI, Rules Delhi High Court

The police has faced the wrath of the court several times in this case for the manner in which it has been carrying out the probe and the slow progress. 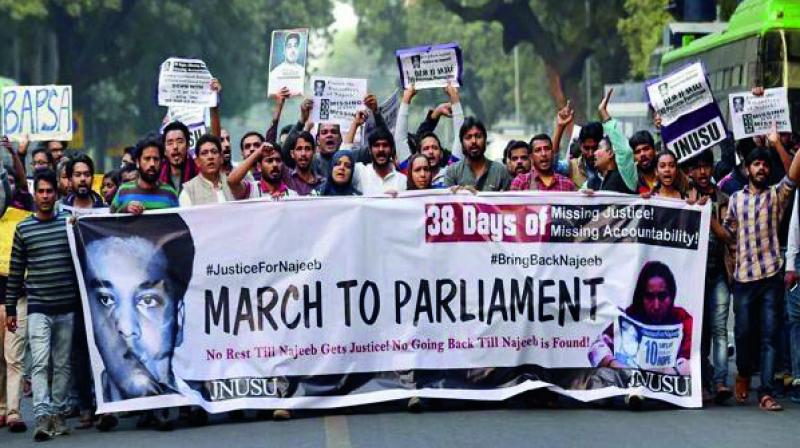 New Delhi: The Delhi high court today transferred the investigation into the disappearance of Jawaharlal Nehru University student Najeeb Ahmed, missing since last October, to the CBI from the police with immediate effect.

A bench of Justices G.S. Sistani and Rekha Palli transferred the matter to the CBI on a plea by the student’s mother after the Delhi police said it has no problem with such a direction. The court said the probe by the CBI would be supervised by an officer, not less than the rank of a DIG.

While transferring the matter, the court noted that the Delhi police had implemented all directions and suggestions given by the court. The matter will be taken up next on July 17.

The student had gone missing a day after an altercation with some ABVP students on the night of October 14, 2016. The BJP students’ wing in JNU has denied any involvement in his disappearance.

The high court had on May 12 rapped the police over the manner of its probe into the disappearance of Ahmed, saying it appeared to be looking for an “escape route” and was “beating around the bush”.

The court had said the conduct of the police showed it was looking for a way out as it was filing reports in sealed covers and “there was nothing confidential, damaging or crucial” in them. It was referring to the forensic analysis reports of the missing student’s laptop and call records that the police had filed in a sealed cover but had initially not even shared with its own lawyer. It was based on these sealed reports that media reports had claimed Ahmed had “links to ISIS”, though the police officially denied this charge. The judge said that this report was perhaps planted by the police to sensationalise the matter, to distract from their lack of progress, adding that the sealed reports contained nothing to suggest that Ahmed had conducted internet searches on ISIS.

The court had also lashed out at the police, saying it has been “beating around the bush and not in the bush” as it has been sending people across the country and setting up special investigating teams (SITs), but the nine students suspected to be behind Ahmed’s disappearance were neither questioned no taken into custody.

The police has faced the wrath of the court several times earlier too in this case, for the manner in which it has been carrying out the probe and not sharing some information with their own lawyers.

Noting that the messages of the suspected students have not yet been examined, the court had said if the messages of the period when Ahmed went missing have been deleted, “then that in itself is incriminating”. Blasting the manner the police carried out the probe, the court had said, “If today it is Najeeb, tomorrow it could be anybody, just because he belongs to some other community or a political body”.

Responding to the court’s observations, DCP Ram Gopal Naik, who heads the SIT, told the court how he went about investigating the case and what aspects and angles, including that of Ahmed’s medical condition, were considered by him.

The court was hearing a plea by Ahmed’s mother, Fatima Nafees, seeking the whereabouts of her son who went missing from the JNU campus and is yet to be traced. Now she is seeking the dismantling of the SIT and the setting up of an independent SIT of police officers from outside Delhi. She is also planning on meeting the CBI each to plead that the case be investigated in a speedy and fair manner, a statement from the JNU students’ union said.