Signature campaigns, letters to the president, prime minister and home minister oppose state government's move to remove the DGP in favour of a Naga IPS officer from Chhattisgarh cadre. New Delhi: Civil society organisations have spearheaded a stiff campaign across Nagaland since the first week of June to prevent the state government from removing the acting director general of police (DGP) Rupin Sharma from his post.

Sharma, a 1992 batch IPS officer of Nagaland cadre, who has served in the state for 26 years in different positions and is widely considered a competent bureaucrat and often given the credit for rolling out reforms within the police force, was appointed as acting DGP in November 2017. 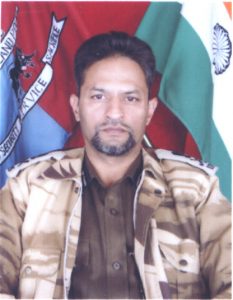 The public campaign, which began with letters written to the Union home minister Rajnath Singh and the Prime Minister Narendra Modi on June 6 and June 8 respectively by the Nagaland Public Rights Awareness and Action Forum (NPRAAF), took to a mass signature drive since June 18. Largely mobilised by student groups and senior citizens, the campaign received ample traction on June 18 when ‘signature campaign centres’ opened in different parts of the state. One such centre also opened in front of the police headquarters in capital Kohima on June 19 to press the Neiphiu Rio government from going ahead with the decision. Local media reports quoting volunteers manning the campaign centres said the signature campaign would continue till June 21 across the state.

On June 20, Hito Swu, president of NPRAAF told The Wire from Dimapur, “So far the public signature campaign carried out by NPRAAF has 11,027 signatures and it will certainly go up by tomorrow.”

Pito Swu, founder of Naga Mirror, reportedly one of the largest groups on Facebook in the state, along with three other youth, has formed a group named Concerned People of Nagaland to oppose Sharma’s removal. He told this correspondent from Dimapur, “Our volunteers are mainly collecting signatures in Kohima and Dimapur, the two big towns of the state. We will take a count of the signatures only tomorrow, when the drive ends. But I would say, we have roughly collected about 18,000 signatures so far.”

Swu said, “Tomorrow, we will meet at Dimapur and then decide the next course of action. We will submit the signatures to the state government and share it with local media.” The group has also written an open letter to President Ram Nath Kovind urging him “to intervene” in the issue.

For the second time since March this year, there has been information floating around about the possible change of guard at the top post. Though the state administration has neither denied nor confirmed the news published in local media and DGP Sharma has told reporters that he has not received any transfer order yet, reports early this week said that the Rio government was keen to replace Sharma with T.J. Longkumer, a native of Nagaland and a 1991 batch IPS officer of Chhattisgarh cadre.

On getting to know about Sharma’s likely removal, many of his junior officers held an “emergency meeting” at the police headquarters on June 15, albeit without permission from Sharma. Local reports said the members at the meeting took the resolution to submit a “mass petition” to the state government expressing their displeasure at the move besides deciding to hold a “solidarity meeting” outside the police headquarters on June 18 morning.

Requesting all units of Nagaland Police to hold similar solidarity meetings, the minutes of the meeting reportedly said, “An officer of his calibre was the need of the hour. Under his short period as DGP, the Department has seen landmark changes and the working system improved in many ways. This has benefited not only the department but Nagas as a whole. An upright and honest officer like him was needed to lead the Department.” 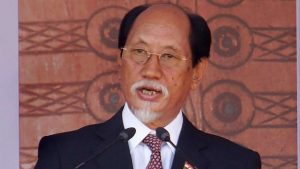 Swu endorsed that view and said that the outfit decided to send letters to the Central government after it learned that earlier this year, chief minister Rio, deputy chief minister K. Patton (earlier with the Congress and now with the BJP) and the state chief secretary sent a letter to the home ministry stating that “Sharma is not competent enough to be the DGP of Nagaland, which is totally wrong”.

“Instead, Sharma is one of the most competent police officer of the state who gave immaculate services to the state at its darkest hour. If he can’t handle the law and order situation in the state, how can someone who doesn’t belong to the cadre and never served the state, can, just because he is the politicians’ choice?” asked Swu.

“Sharma is being transferred because he is not ready to act as per the demands of his political bosses. Though the chief secretary has told local media that no decision has been taken so far, we have heard that the government has written to the home ministry in that regard and the file has already been cleared and that is why we are protesting,” said Pito.

In the letter to the home ministry, NPRAAF said Sharma should not be released from his present position “in the greater interest of ‘good governance’ and rule of law which has also been a long (held) slogan of Honourable Prime Minister Narendra Modi government to this day.”

Local media reports quoting police officials said Sharma’s support from within the police force has come mainly due to his ability to halt “backdoor appointments” in the department by various politicians in power. The issue about appointments given to as many as 2,078 people in the police department bypassing the standard procedures in the earlier regime had led to huge public outrage in the state last year with powerful anti-graft organisations like Against Corruption And Unabated Taxation (ACAUT) filing a public interest petition in the Kohima bench of the Gauhati high court. ACAUT too is seeking Sharma’s retention as the top cop.

“This must have certainly affected some interested parties to seek Sharma’s refusal. Also, it was because of Sharma’s efforts that the promotion procedures in the police force have been streamlined. Those constables who would get a paltry Rs 2,500 earlier now get a salary of Rs 15,000, all thanks to his recommendations. With his efficient ways of administration, he was able to earn the trust of both his junior officials and the public,” said Swu. The state government’s argument for Sharma’s removal, until now, is based on the premise that he doesn’t meet the criteria as he hasn’t yet completed 30 years of service. There is also a parallel argument about Longkumer being “the son of the soil”.  The civil society organisations, however, have rejected these arguments pointing out that Longkumer too doesn’t have 30 years of experience.

A winner of President’s Police Medal and reportedly the first non-CRPF officer to receive the CRPF award in 2012 as IGP Bastar region, Longkumer, son of Padmashri accorded Naga poet-writer and professor of English at the North Eastern Hill University (NEHU), also came to limelight in 2010. He, along with another IPS officer, Amresh Mishra, were alleged to be responsible for lapses in connection to the Maoist massacre of 76 CRPF personnel in Chhattisgarh’s Dantewada. Though the then home ministry wrote to the Raman Singh government in the state to take action against Longkumer and Mishra, no action was taken against them.

Yet another case related to the state’s police force that NPRAAF took up was the charges of massive corruption against M.K.R Pillai, who was appointed ‘consultant’ to the state DGP. Last year, following huge public uproar against Pillai as a consequence of reports in the media about siphoning off of multiple crores allotted under the head of modernisation of the police force, he was terminated from his services. Questioning the state government for not proceeding against him beyond terminating him “in spite of prima facie evidence”, NPRAAF had sought a probe by the Central Bureau of Investigation.

“Nothing has happened to that case yet. The state government is silent on the issue and then we hear that an honest official, who is working for the welfare of the state, is going to be removed. We feel that at a time when the Naga peace talks are going on with the Centre, it is all the more important that we have a competent DGP, someone who has served the state for so many years,” said Swu.

Commenting on the topic that has rocked the state for some days now, an editorial in the Dimapur-based daily Nagaland Page said on June 18, “Ultimately, the principal issue the state government and the public ought to focus on is the best interest of the state, which by the way, is not necessarily linked to any particular officer is but her/his efficiency and effectiveness – and more importantly to her/his commitment to the Constitution of India, not the requirements and caprices of the political party in power – after s/he explicitly meets all requirements to wear the DGP’s colours. This then also invalidates all arguments that only a son of the soil is best equipped to address and redress the needs of any particular state of the Indian Union because in India all Indians are sons of the soil – and there are interminable instances when sons of the soil have been detrimental to the interest of the state and the people by flouting laws of the state.”

As per unconfirmed reports, Sharma has been asked to hand over charge to his junior officer Renchamo Kikon on June 20 afternoon. The Wire reached out to the press secretary to the chief minister for an official confirmation. He said the government hasn’t issued any formal note to the press yet and he would not like to comment further.

Late on June 20, a notification from the state home department said additional DGP Renchamo P. Kikon has been asked to take charge of the DGP position “in addition to his normal duties with immediate effect”. It said, “Rupin Sharma, DGP, Nagaland, is kept on compulsory wait and directed to hand over the charge to R. Kikon today itself.”

Reacting to the government’s decision, NPRAAF, in a press note, said, “The state government’s action is an insult to the honest police officer, who refused to bow down to mantris (ministers) and babus (bureaucrats) for corruption. Such unethical action will demoralise the state police force and an honest public servant.”

It added, “NPRAAF demands to know from the government if Rupin Sharma IPS do not qualify the set criteria of 30 years to become DGP, then what criteria were followed to appoint the new DGP.”