The change of leadership notwithstanding, NSCN(K)’s ties with the separatist groups from the Northeast will remain the same. 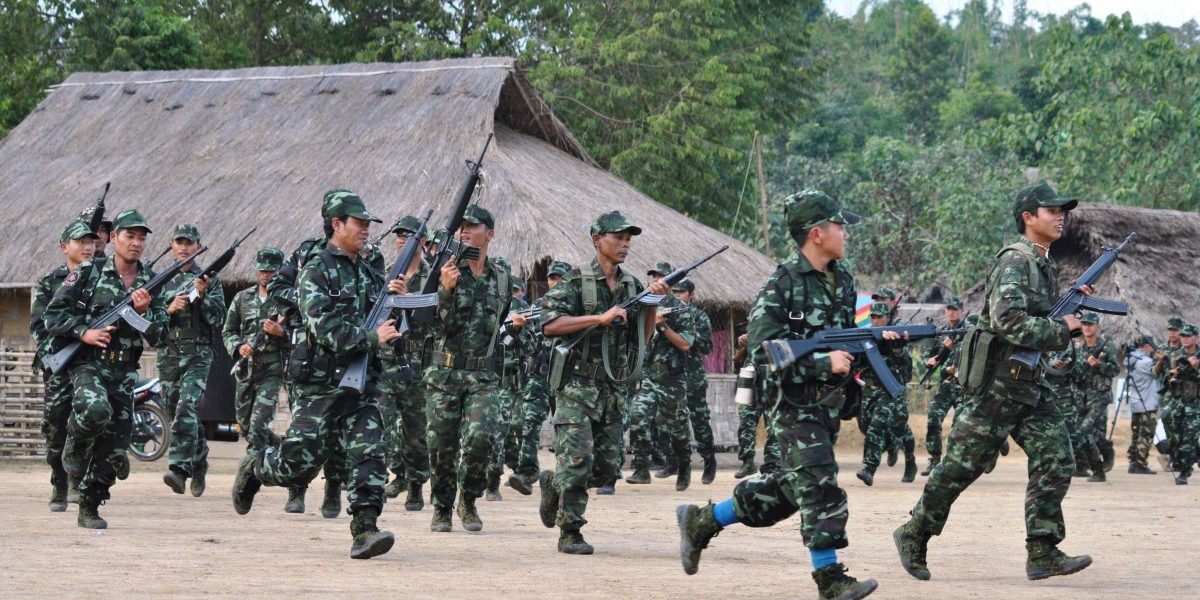 Cadres of NSCN(K), KYKL and PREPAK ahead of a joint parage in Myanmar's Taga. Credit: Rajeev Bhattacharyya

On August 17, Khango Konyak was impeached from the post of chairman of the separatist Khaplang faction of the National Socialist Council of Nagaland (NSCN-K) capping a long chain of events that began soon after the demise of the organisation’s founder and chairman S.S. Khaplang last year.

The cabinet also gave its approval to the appointment of Khaplang’s nephew Yung Aung as the acting chairman at a meeting of the outfit’s central headquarters in Myanmar’s Taga. This also means that Aung will head the Government of the People’s Republic of Nagaland (GPRN) which holds sway over the Naga inhabited region in Myanmar’s northern Sagaing Division. The general council is expected to endorse the resolutions within two weeks. 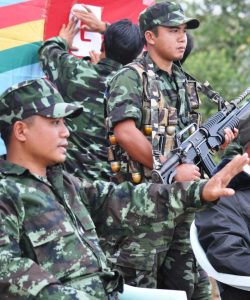 NSCN(K) functionaries in Nagaland’s Mon identified two reasons that led to Konyak’s exit after decades of his association with the group since its formation in 1980 (NSCN). “For quite some time, Konyak was unable to assume an active role in the organisation and discharge his duties due to his sickness. He had been away from Taga for a long time which widened the gulf that existed between him and other top leaders,” said a functionary of the outfit who did not wish to be named.

They said Konyak was recuperating somewhere in the eastern Konyak region of Myanmar’s Sagaing Division when the resolution was passed in Taga. He hails from Mon and his appointment as chairman last year was disliked by some senior members of the cabinet many of whom belonged to the Pangmi tribe, a conglomerate of several tribes inhabiting a large area from the border in Arunachal Pradesh to the hills bordering Hukawng Valley. There were regular inputs about the growing differences between Konyak and other leaders like commander-in-chief Khumchok Pangmi. Konyak was accused of usurping all powers which violated the party’s ‘yehzabo’ (discipline).

NSCN(K) could not have allowed the internal strife to drag for long given the dire financial conditions of the group currently. Besides, pressure was mounting from Naypyidaw to give up the demand of sovereignty. The ties between the two sides have remained friendly after the informal agreement in 2001 which was converted into a written accord on April 9, 2012. The Nagas have also allowed Myanmarese teachers to teach their children the language which this correspondent witnessed during an assignment in 2011-12.

But Naypyidaw also seems to be in a hurry to enlist as many rebel groups as possible including the Nagas in the Nationwide Ceasefire Agreement. It remains to be seen how Aung copes with the situation and whether he is able to achieve a breakthrough in the deadlock that has continued for the last few years.

Konyak’s expulsion is the fourth instance when leaders from the Northeast have had to quit the outfit following differences with the leadership in Myanmar. The first was in 1988, when Thuingaleng Muivah and Isak Chisi Swu had to exit after clashes broke out with Khaplang’s supporters. This divided the NSCN into the Khaplang and Isak-Muivah factions triggering a turf war, killings and abductions.

The next came in 2011 when commander-in-chief Khole Konyak and prime minister of GPRN K. Kitovi Zhimomi deserted the group to form their own organisation. Four years later came another incident when Y. Wangtin Naga and Tikhak had to part ways after they opposed former chairman S.S. Khaplang’s decision to abrogate the ceasefire with the Indian government.

Barring sporadic incidents, none of these later incidents fuelled violence similar to the event in the late 1980s. A former activitist of NSCN(K) who is now associated with an over ground group in Nagaland is also of the opinion that Konyak’s impeachment will not result in any turmoil in the Konyak-inhabited region. “The cabinet’s decision also has the support of Konyak leaders from Myanmar. So, it is doubtful if all the leaders from the tribe will join hands with the former chairman,” he said.

Despite the drawbacks in his leadership, Khango Konyak is a revered leader among the Nagas of eastern Nagaland. He was among the early rebels from the Naga National Council (NNC) to have been trained in China’s Yunnan province and who later decided to join hands with Khaplang. So, the possibility of some of his close associates walking out with him cannot be ruled out as it happened when Khole Konyak and Y. Wangtin Naga had left the group. According to media reports, Khango Konyak will join the NSCN(IM) along with his followers after reaching Nagaland.

Impact on separatist campaign in Northeast

The change of leadership notwithstanding, NSCN(K)’s ties with the separatist groups from the Northeast will remain the same. The Naga group is low on resources, which is why it has to depend upon the other outfits for weapons and human resource. It is a mutually beneficial association that has endured since the early 1980s with more outfits pitching tent and establishing training facilities over the years. The camps that exist across Manipur and elsewhere in Myanmar are however beyond the control of NSCN(K) and they exist through a tacit understanding between the army and police.

Konyak’s departure from Myanmar will lead to further shrinkage of NSCN(K)’s support base in Nagaland. It will be more focused on the Naga inhabited region in northern Sagaing Division across the border and the pockets in the eastern districts of Arunachal Pradesh where it still commands support. There are also rumours that the Sumi faction from Nagaland led by Nikki Sumi in NSCN(K) may soon land up at a ceasefire designated camp in the state.

But NSCN(K) would not be totally deprived of its capability to carry out strikes in the region. Like many Naga tribes, Konyak villages are found on both sides of the hilly border and residents are allowed to travel up to a distance of 16 km on the other side. According to informed sources, many village headmen have refused to take sides and have maintained cordial ties with all the groups.

Militant activities in the contiguous stretch from Mon to Sivasagar in Assam which was once so prominent will decrease and shift to the eastern districts of Arunachal Pradesh bordering Myanmar. All the major attacks against the security forces in the last couple of years have taken place around the Margherita-Jagun region that have routes leading straight to the border through areas of support in the hill state.

Rajeev Bhattacharyya is a Guwahati-based journalist and author of Rendezvous With Rebels: Journey to Meet India’s Most Wanted Men.