'Murder of Democracy': Congress Leaders Detained For Protesting Against 'Misuse' of Agencies

The MPs had marched from the Parliament complex to the Vijay Chowk lawns, where they held a sit-in and raised slogans about the government's use of agencies, rising prices, the GST rate hike and more. 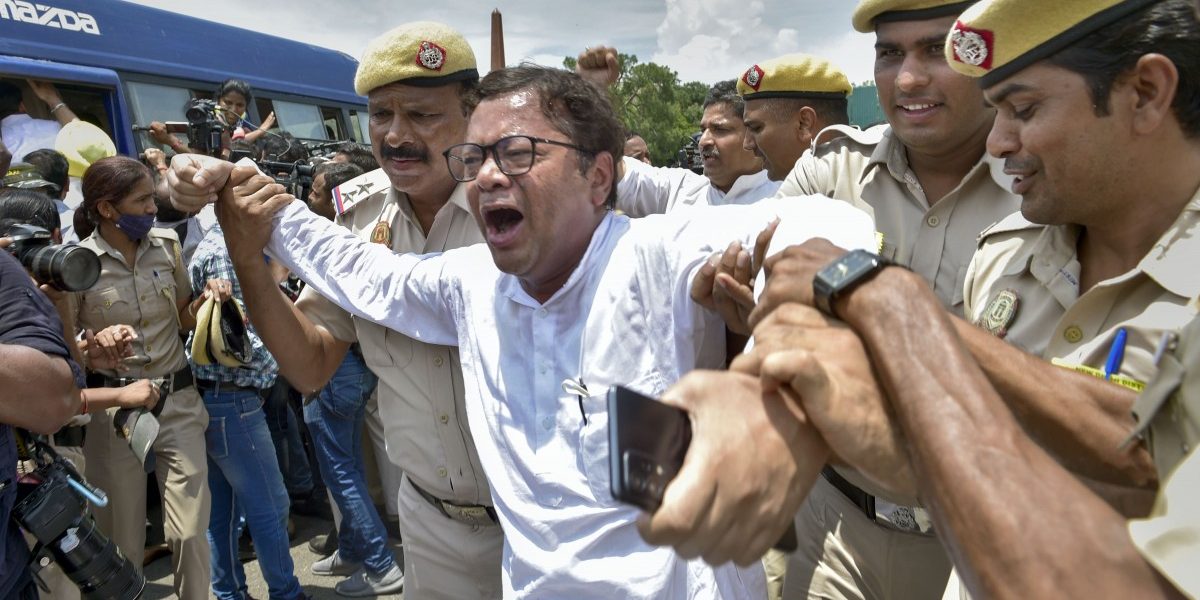 Congress MP Saptagiri Sankar Ulaka being detained by the police during the protest at Vijay Chowk on Wednesday, July 27. Photo: PTI.

New Delhi: Congress MPs staging a protest at Vijay Chowk over the alleged misuse of investigative agencies were detained by police on Wednesday, July 27, with the party calling it a “murder of democracy” and claiming that the government wants an “Opposition-mukt Bharat”.

Leader of the Opposition in the Rajya Sabha, Mallikarjun Kharge; leader of the Congress in the Lok Sabha, Adhir Ranjan Chowdhury; and a host of party MPs sat on a protest and raised slogans against the “misuse” of agencies such as the Enforcement Directorate (ED) and the suspension of Opposition MPs from both houses of Parliament.

They also raised the issues of price rise and imposition of the Goods and Services Tax (GST) on certain essential daily-use items.

The MPs marched from the Parliament complex to the Vijay Chowk lawns, where they held a sit-in and raised slogans.

“We are fighting on issues of people such as price rise and GST on essential items of daily use. We will keep fighting against this and the misuse of the ED and other agencies. The suspension of MPs is wrong and we demand that it be taken back immediately,” Kharge told reporters.

Chowdhury said the manner in which investigative agencies are being used, it seems that the government wants an “Opposition-mukt Bharat”.

Minutes after the protest started, the MPs were put in police vans and detained.

Talking to reporters from a police van, Congress general secretary Jairam Ramesh said, “Today also our MPs have been detained. This is a murder of democracy. The Modi government is not allowing a discussion on price rise and GST on essential items. And when we are raising our voice for discussions in Parliament and the politics of vendetta, we have again been detained.”

“For the third day, Congress MPs staging legitimate and peaceful protests at Vijay Chowk have been taken away to God (and PM and HM know) alone knows where. This is Muzzling Of Democracy In India in action!” Ramesh later said in a tweet.

For the third day, Congress MPs staging legitimate and peaceful protests at Vijay Chowk have been taken away to God (and PM & HM know) alone knows where. This is Muzzling Of Democracy In India in action!

Mahila Congress and Youth Congress workers staging a protest against the alleged misuse of investigative agencies outside the All India Congress Committee (AICC) headquarters here were also put in police buses and detained.

Earlier in the day, the Congress alleged that the Prevention of Money Laundering Act (PMLA) has been weaponised to target and humiliate people, and urged the Supreme Court to decide on the matter concerning the National Herald-Associated Journals Limited case soon.

The assertion came on a day when Congress president Sonia Gandhi (75) appeared before the ED for the third day to face questioning in connection with a money laundering case pertaining to the National Herald newspaper.

The Congress also fielded its senior leader Ghulam Nabi Azad in solidarity with Gandhi and said political opponents should not be treated as “enemies”.