As Mukul Roy Distances From BJP Leadership, Is He Headed Back to the TMC?

There have been several signs over the last few months that Roy and the BJP leadership are unhappy with each other. 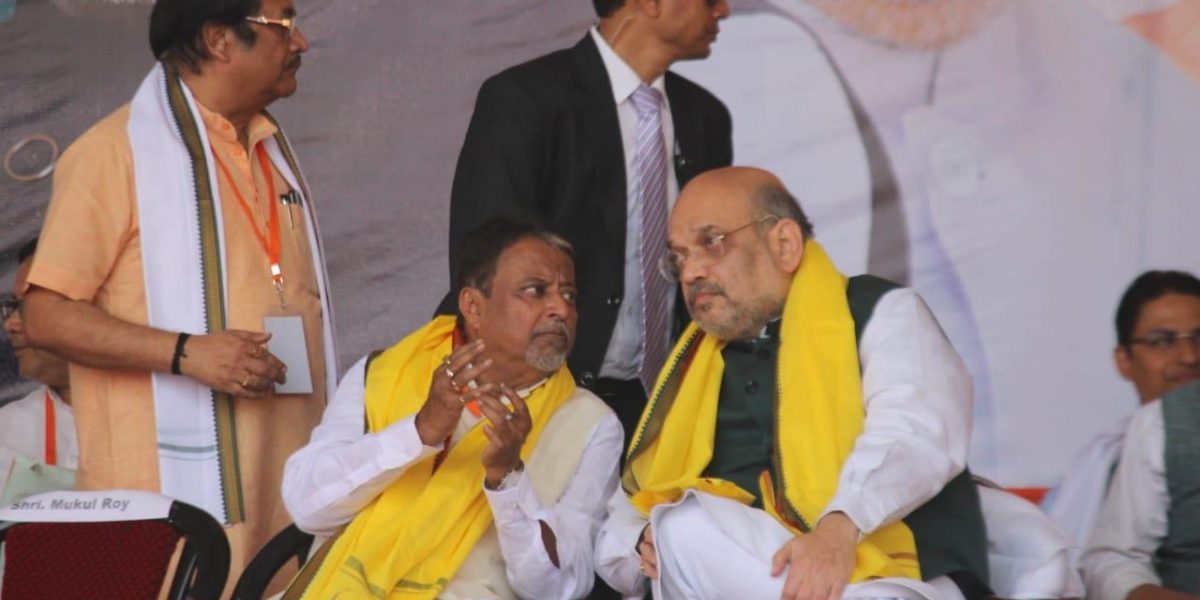 Kolkata: West Bengal Bharatiya Janata Party leaders are in Delhi for a three-day meeting with the central leadership, chalking out a strategy for the 2021 assembly elections in the state. What’s significant is that the party’s national executive member Mukul Roy, who played a crucial role in the BJP’s meteoric performance in the 2019 general elections, did not attend the meeting even though he was in Delhi on Thursday. On Friday morning, Roy flew back to Kolkata.

Speaking to the media in Delhi, BJP state president and MP Dilip Ghosh said, “Mukul Roy has some issues with his eye and might undergo a surgery, so he won’t attend the meeting and is likely to fly back to Kolkata.”

The question that remained unanswered is why Roy went to Delhi on Tuesday and flew back to Kolkata on Friday, but still could not attend the crucial meeting on Thursday. Home minister Amit Shah and BJP president J.P. Nadda are chairing the meetings.

After joining the BJP in late 2017, Roy was made head of the party’s election management committee in West Bengal. With the 2018 panchayat poll and 2019 Lok Sabha election, Roy has consolidated his position in the party. He played a crucial role during and before the 2019 general elections in poaching MLAs, MPs and other leaders from the Trinamool Congress.

Shah showered praise on Roy for his election engineering. But a lot of water has passed under the bridge since.

Roy was instrumental in bringing tainted TMC MLA from Birbhum, Manirul Islam, over to the BJP. His induction sparked unrest in BJP’s Bengal unit, as many within the party believed that it would malign the party’s image.

The BJP state president then said, “People are disappointed with the induction of persons like Manirul Islam and so am I. However, for larger political interest we have to accept them.”

Also read: In Bengal Politics, Violence Begets Violence. But Does it Always Deliver the Goods?

In July last year, speaking from the BJP headquarters in Delhi, Roy publicly announced that he had a list of 107 TMC MLAs who are ready to join BJP. A year has passed, but hardly anyone has moved over to the saffron party.

Unhappy with the Bengal BJP, the Rashtriya Swayamsevak Sangh (RSS) said the induction of leaders will be conducted only after a screening at the Sangh’s mandal level, The Hindu reported.

Roy had promised the BJP central leadership that the party would win all three by-elections in West Bengal held in November last year. However, the exact opposite happened – the party lost all three seats.

It will soon be three years since Roy joined the BJP. The party has definitely benefited from his switch-over, but he has been denied of leadership positions. There was talk in Delhi over the last few months of Roy, Jyotiraditya Scindia and Himanta Biswa Sarma being inducted into the Narendra Modi cabinet. But perhaps due to the COVID-19 outbreak, that plan hasn’t materialised.

Interestingly, Roy’s Twitter profile disappeared on July 14. The next day, he tweeted saying, “I am very much on Twitter and would continue to reach out to all through the medium. The technical glitch with my account has been sorted.”

A senior BJP leader from West Bengal, on the condition of anonymity, told The Wire, “Mukul Roy is increasingly restless and jittery. He has very little patience left and is irked by the state leadership.”

When asked what the party thinks about him, the leader said, “Many in the party leadership feel Roy is tarnishing the party’s image. Also, his recent activities offended the leadership.”

Another senior BJP leader said, “Unlike TMC and other parties, ours is a well-structured party. However great the leader might be, no one gets a free hand in this party.”

Jyotipriya Mallick, West Bengal food and supplies minister, told The Wire, “I don’t want to comment on this. Please talk to Subrata Bakshi.” Bakshi is TMC’s Rajya Sabha MP from Bengal and general secretary of the party. Multiple calls to him went unanswered.

A Trinamool MLA who wished not to be named told The Wire, “In all likelihood, PK’s (Prashant Kishore’s) team is in touch with Mukul Roy. I don’t know anything beyond that.”

Poll strategist Kishore’s Indian Political Action Committee (I-PAC) has been working in Bengal for over a year now. When asked, a senior I-PAC executive said about Roy’s possible return to the TMC fold the organisation was not aware of any such developments.

Speaking to The Wire, political analyst Biswanath Chakraborty said Roy’s politics is all about power. With no significant power or position in the BJP, he has become restless. Chakraborty also believes that the BJP state leadership is not happy with Roy. “For the BJP, he has become a liability. Because of Mukul Roy, the party’s image was tarnished and this a growing concern within the BJP leadership,” he said.

Two weeks ago, the Enforcement Directorate sent e-mails to Roy along with 11 TMC leaders, seeking details of their assets and income as a part of its ongoing probe into the Narada scam.