It isn't enough for the prime minister to simply offer his moral angst. Pragya Singh represents a line of thinking that belongs to his ideological home of politics and he needs to tell the nation what was politically wrong with Godse. 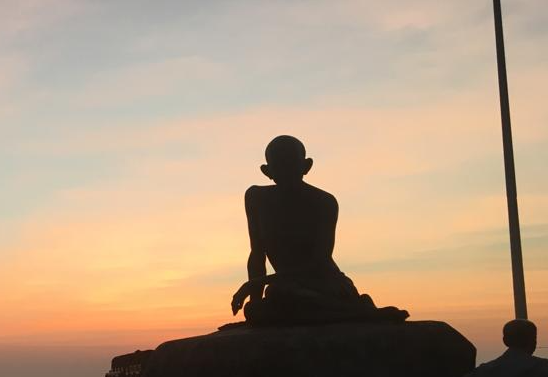 Narendra Modi’s apparently ‘acceptable’ response to Sadhvi Pragya’s comment on Godse is a clever ploy, and deflection, of language. This is what he said to the Hindi channel, News 24:

“Whatever has been said about Gandhiji or Godse, whatever statements have been made in this regard, are extremely bad, in every way worthy of contempt and criticism. Such language and thinking isn’t part of any civilised society, and it can’t be allowed. Therefore, those who are doing this have to pause a hundred times. Though she has apologised, I won’t be able to forgive her in my mind” (my translation).

The instantly visible issue with Modi’s statement is the deployment of a moral language and tone that shifts attention away from the political content of what Pragya said. Notice that he does not say anything about Gandhi or Godse, except simply naming them, and keeping his own thoughts on them, perfectly vague.

There is a rhetorical hyperbole in Modi’s condemnation, which strictly revolves around the contours of moral language. While Pragya Singh’s comment offends the universal moral standard which requires us to  differentiate between a murderer and his victim, the values and motives each stood for in life are equally important. In other words, the conflict between Godse and Gandhi is one of political morality and is intrinsically related to questions of a political nature.

Godse did not shoot Gandhi because he wanted to solve a personal, moral issue. What disturbed Godse about Gandhi was a certain idea of the nation that Gandhi was consistently adhering to, where the question of justice was never about Hindus or Muslims but what lay “between” them. On January 1, 1940, Gandhi wrote in Harijan: “My belief is unshaken that without communal unity, Swaraj cannot be attained without non-violence. But unity cannot be reached without justice between communities. Muslim or any other friendship cannot be bought with bribery. Bribery would itself mean cowardice, and therefore violence … I can disarm suspicion only by being generous. Justice without generosity may easily be Shylock’s justice.”

Gandhian politics steadfastly held on to the value of justice that would suit both communities. But as a Hindu, his first political (and ethical) obligation was towards the Muslims. The plane of ethics is never straight. It is always titled in favour of the other, where you stand a little below. This was simply not acceptable to Godse as he made clear in his speech in the Punjab high court in May 1949, defending his actions.

Let us pause over his speech to learn the exact nature of what provoked him to murder. Godse made it clear – his political task was simply to “secure the freedom and to safeguard the just interests of some thirty crores (300 million) of Hindus.” Godse’s nationalism was focused on communal interests alone. There was no space for others in his political concerns. Ethically speaking, the other did not exist for Godse, for all he understood was allegiance to his own religious identity.

Laying the ground for his murder, Godse said,

“The accumulating provocation of thirty-two years, culminating in his last pro-Muslim fast, at last goaded me to the conclusion that the existence of Gandhi should be brought to an end immediately.” The key word here is “pro-Muslim”.

Godse made another revealing remark specific to his problem with Gandhi’s fast: “One of the conditions imposed by Gandhi for his breaking of the fast unto death related to the mosques in Delhi occupied by the Hindu refugees. But when Hindus in Pakistan were subjected to violent attacks he did not so much as utter a single word to protest.”

Like latter-day Hindutva apologists after him (who respond to every crime committed by Hindus with the insouciant response, ‘What about Pakistan?’), Godse was incapable of grasping the fact that an Indian’s first priority and responsibility is to address what is wrong in his own nation. Gandhi’s immediate point of concern was what was happening to the minorities of his own country. For Godse’s majoritarian mindset, the political ethic behind Gandhi’s gesture is simply a betrayal of Hindu “interests”. Godse’s idea of a majority community’s political relations with minorities is based on a Machiavellian competition for power.

The last statement I quote from Godse’s speech shows how he saw Gandhi’s ethical moves as detrimental to the well-being of Hindu community:

“I do say that my shots were fired at the person whose policy and action had brought rack and ruin and destruction to millions of Hindus.”

These are the words of a man who acts – shoots – in the name of his community’s interests against a man he thinks is working against them.

When we speak of Godse, then, we are confronted with both his political motivation and his act. What Modi and all those BJP members who may want to distance themselves from Pragya Singh’s comment need to tell us is where they stand in this political point of difference between Godse and Gandhi. This alone will give us a better clue behind their apparent moral angst.

By vehemently insisting that Godse is a “deshbhakt” (patriot), Pragya Singh threw a challenge to all those who hold Godse to be a moral violator of our polity and social ethic. By siding with Godse, the Sadhvi is provoking a debate that is political: If Godse is understood as a patriot, his murder of Gandhi becomes justifiable in instrumentalist terms, where communal politics purely based on “interests”, becomes legitimate. The instrumentality of communal politics is being given a pride of place in the political lexicon and imagination. This is precisely what Pragya is out to do. Her apology is obviously tactical, made under duress. Her belief in Godse as a patriot is real. Pragya is waiting for the day when she does not have to apologise for her belief.

By fielding Singh in the elections, the BJP took its first step towards legitimising her political credentials. She is part of the political mindset that rules the Sangh parivar. Godse was confessedly part of that same mindset. It isn’t enough for Modi to simply offer his moral angst against what Pragya Singh said. She represents a line of thinking that belongs to his ideological home of politics. A political statement clarifying what was wrong about Godse and what was right about Gandhi will give us – and his own supporters – a better sense of where he stands. Godse’s communalist morality was political. Gandhi’s politics was ethical. Between the two, there is blood.