Cult leaders do not simply govern through force — by threatening backsliders with punishment. Instead, they gain power through cultivated uncertainty. 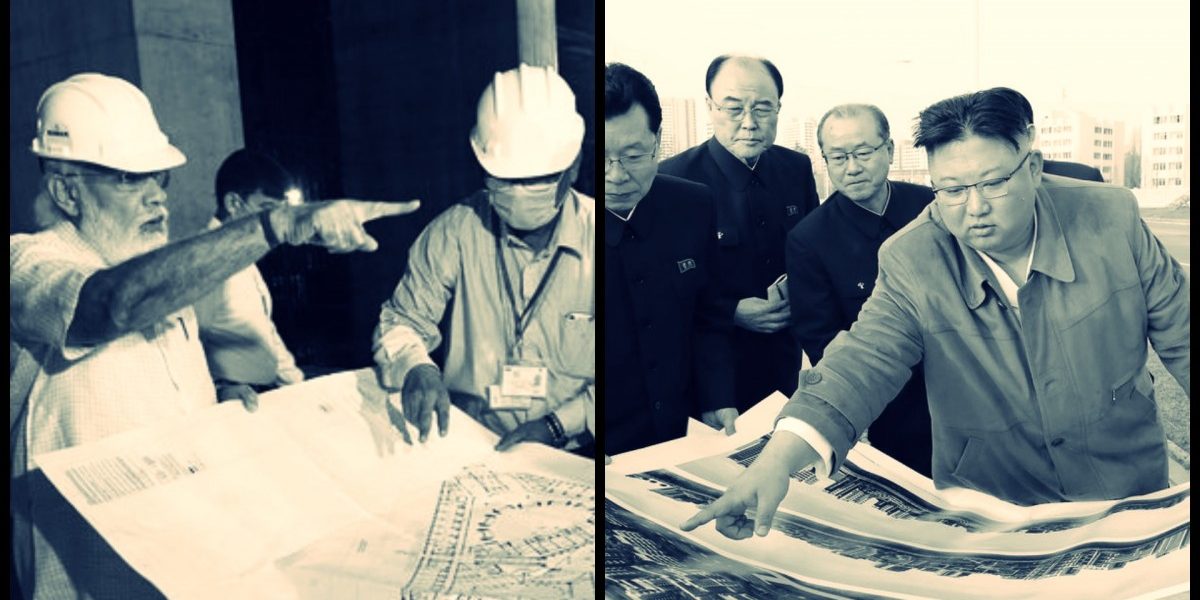 The Great Leader takes charge of everything: Prime Minister Narendra Modi was photographed directing the construction plans of the new parliament building in Delhi on Sunday (left). The image is strikingly similar to North Korean leader Kim Jong Un at a construction site in Pyongyang. Photos: Twitter/KCNA

Narendra Modi’s spin doctors have been busy engineering an aggressive image make-over for their leader these past few weeks. The country has never witnessed such frenzied promotion for any politician, both in terms of its intensity and spread.

The campaign began with – and was perhaps prompted by – the alarming fall in the prime minister’s popularity following his chaotic and disastrous handling of the second Covid surge in which it is officially estimated that around half a million people died. Unofficial estimates peg the real death toll much higher.

When the first alert on Modi’s falling popularity was reported by a foreign news agency in May 2021, the official response was to ignore it. Then came the more detailed state of the nation survey by India Today in August.

This prompted Modi’s image builders to give India’s “elected autocrat” an impenetrable aura. Modi, who already enjoyed ‘supremo’ powers, suddenly began to be even more assertive. The other component of the post-May image building exercise has been a massive marketing style promotion.

Taking up the second first, what we have seen is outright product promotion for Modi. The campaign reached its peak on his birthday on September 17. The three-week-long birthday drive had two parts, all borrowed from the classical populist playbook. The first was plain vanilla marketing publicity – eg. the mass distribution of Modi bags and the putting up of hoardings. The second centred on meetings and seminars where artistes and celebrities were invited to highlight Modi’s life and achievements.

Prominent Hindutva supporters were drafted to write articles on his performance in both the English and language media. The entire government machinery was pressed in to mobilise 2.51 crore vaccinations as birthday gift to the Leader on September 17. This was, of course, a one-day wonder, with the number of jabs administered on September 18 falling back to the normal 88.37 lakh, followed by a further dip to 40.4 lakh on September 19.

There were also reports of state governments faking data to meet jab targets. In Bihar, the official attempts to artificially boost the number of jabs on the PM’s birthday have been well documented.

Look at the unprecedentedly elaborate birthday programme for a serving prime minister. The entire BJP, its chief ministers and their state machinery were mobilised for three weeks to eulogise Modi. Chief ministers were asked to flood media with “Thank you Modi” advertisements. State governments distributed 14 crore bags with his pictures. Videos praising Modi for helping the poor and hailing him as ‘garibon ka masiha’ were rushed out in different languages. The PM was also thanked for the ‘successful’ vaccination.

BJP supporters along with child priests perform ‘abhishek’ of a photo of Prime Minister Narendra Modi on his birthday at Sant Pashupatinath Ved School in Patna on September 17, 2019. Photo: PTI.

Soon came the programme of sending five crore ‘Thank You Modi’ postcards to the PMO. Meetings and seminars on Modi’s life and work were held and newspaper articles in English and regional media were also part of the campaign. Businessmen were encouraged to take part in the auction of mementos received by the PM. A former Maharashtra chief minister’s wife came out with devotional songs on Modi and pro-BJP channels sounded like Doordarshan. “The CEOs of Qualcomm, Adobe, First Solar, General Atomics and Blackstone praised the Indian prime minister after the one-on-one meetings,” Subhash Chandra’s WION channel breathlessly told viewers.

At the core of Modi image build-up lie genuflection and sycophancy. You can see it at any BJP function or PM rally. This has become part of parliament debates. According to one calculation, 25 BJP members in Lok Sabha made a total of 253 references praising Modi’s leadership during the motion of thanks to the President.  Similarly, in the Rajya Sabha, 19 MPs made 167 adulatory mentions to Modi. That’s a total of 420 ‘Modis’ in all.

More disturbing is the case of the Indian Army being dragged into the Modi build-up. The headquarters of the Army’s 15 Corps – responsible for operations in the Kashmir Valley – used its official Twitter handle (@ChinarCorpsIA) to felicitate Narendra Modi in laudatory language with his photographs. Fortuitously, the tweet was later withdrawn.

Going back to the first element of this campaign, the move to give a more imperious and assertive persona to someone who already enjoyed supreme powers raises deeper democratic concerns. Suddenly, Modi is everywhere, even driving construction like a Great Helmsman. With the Leader in charge, there is no need for expertise, deliberation, planning. 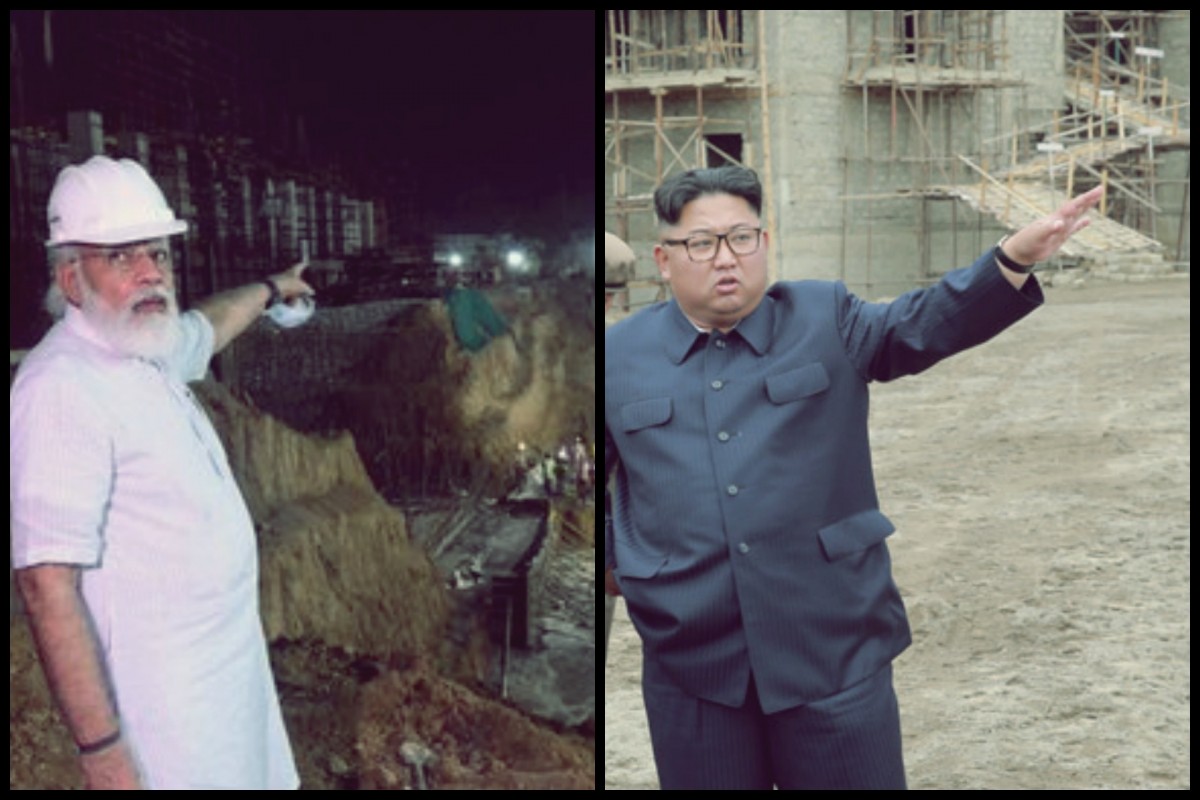 Great Leaders have the ability to notice and point out things that even trained experts don’t. Narendra Modi (left) and North Korea’s Kim Jong Un at a construction site. Photos: Twitter/KCNA

All of Modi’s actions, especially his dealings within his party, bear testimony to the new invincibility aura. This serves many purposes. In a polity where large sections fall for power worship, this equips him with surgical strike-like imagery which was found so effective during the 2019 parliament elections. An air of absolute power, especially when the supremo has no visible adversary, evokes respect and obedience. It is also intended to unnerve the regime’s opponents. This is the standard operating procedure of populists the world over.

Jan-Werner Müller puts it succinctly in this recent book, What is Populism?: “It is the leader who has the direct connection with the people; others in government are tasked with carrying out the leader’s commands or communicating his decisions; it is not their job to express dissent or to seek to alter the leader’s mind”. Muller further describes how strong leader populist make his adherents “slavishly loyal” to him.

This was perhaps the logic that prompted the Modi-Amit Shah team to purge experienced ministers from the cabinet and bring in favourites to fill the slots. This is the only explanation for the marching orders to Ravi Shankar Prasad and Prakash Javadekar in the July 2021 cabinet reshuffle. The two had been acting as the voice of the government for the past seven years. Between them, they addressed more press briefings than most other ministers put together.

Other experienced ministers in the firing line were Ramesh Pokhriyal, D.V. Sadananda Gowda and Santosh Gangwar. As a senior Lokniti functionary said, replacing heavyweights with new faces will increase Modi’s grip on the cabinet. Two months on, there is still no sign of the purged leaders being rehabilitated in other positions. This is in sharp contrast to the promptness with which Modi and Shah made defeated chief ministers like Shivraj Singh Chauhan, Vasundhara Raje Scindia and Raman Singh national vice-presidents of the BJP.

Apparently, those purged recently are being treated differently. Like all good populists, the Modi dispensation views those who act ‘over-smart’ with suspicion. This was precisely what happened to Ram Madhav, who went about acting as the PM’s foreign affairs expert. He is now in wilderness.

The panic and uncertainty among the BJP CMs tells its own tale. None of them feel safe after  four BJP chief ministers were sacked in quick succession. The axe can fall any time on the chief ministers of Himachal Pradesh and Haryana. Even the fate of the four-time chief minister Shivraj Singh Chauhan looks uncertain.

As Muller says, cult leaders do not simply govern through force — by threatening backsliders with punishment. Instead, they gain power through cultivated uncertainty. Those in the cult never know what conduct will be punished at any given time. The post-Covid surge Modi regime has adopted this as its strategy.

Consider the recent shuffles in Uttarakhand. In four months between March and July this year, the state saw three chief ministers. Trivendra Singh Rawat was CM up to March 10. In a sudden move, Tirath Singh Rawat was made CM that day. He was removed after being in office for 116 days. Then the high command foisted Pushkar Singh Dhami on July 4. All without discussion with the MLAs and without assigning any reason.

Another component of the new Modi-Shah game plan is the renewed emphasis on picking weak-kneed non-entities as new chief ministers and Union ministers. What the successful candidates have in common is a low-profile and the lack of a pan-state mass base. All those with administrative experience are to be strictly excluded. Personal loyalty matters more than anything.

In Gujarat, his bailiwick, Modi acted even more harshly. On September 12, he got Vijay Rupani to resign as chief minister. For four days media went on speculating  about who would be the next incumbent. Then, the party suddenly named Bhupendra Patel as the new CM.

At the legislators’ meeting on September 16, Rupani was asked to name his successor and was handed a sealed cover. It contained Bhupendra Patel’s name. The message is clear. That the BJP is now a high command-run party has been known for some time. By loudly proclaiming this reality, however, Modi wants it known that an individual’s personal loyalty to the leader will count for more than their popularity or capability.