Instead of playing a cynical game of deploying symbols and language associated with Gandhi along with a semiotic shift in their meaning, the PM should unambiguously state whether he prefers the legacy of the Mahatma or that of Veer Savarkar and the Sangh. 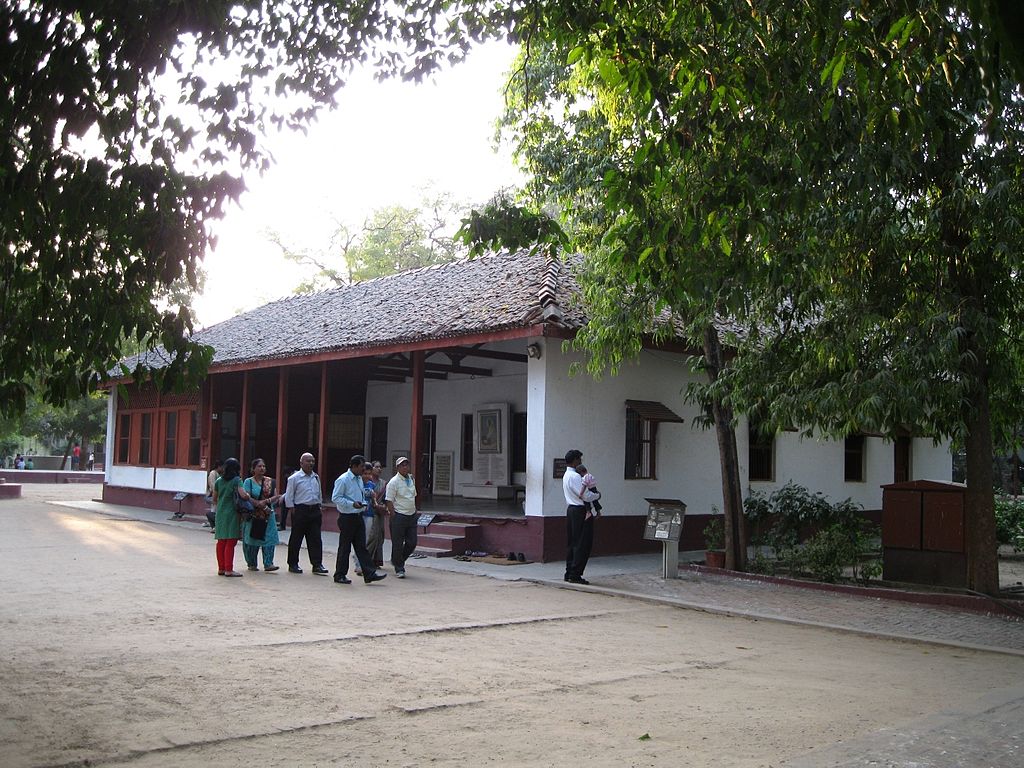 During the first half of the 20th century, Indian public life was defined by the struggle against colonial rule. The fight for political freedom was conjoined with a significant, if incomplete, transformation of our social and political values.

However, while the Indian National Congress represented a broad consensus of disparate interests, there were many sections of Indian society that held themselves apart and chose to bide their time. Thus, the strident demands of communal elements speaking on behalf of Muslims resulted in the partition of India and its accompanying violence. At the same time, those claiming to represent Hindu interests also decided to act. They assassinated Mahatma Gandhi.

Since that singular act of moral depravity, the contradictions of Hindutva claiming to speak on behalf of Indian nationalism have continued to play out in the public realm. The stark absence of the Hindu Right from the freedom movement has necessitated excision, manipulation and refashioning of historical facts. It is no surprise then that Prime Minister Narendra Modi recently presented a series of untruths about Jawaharlal Nehru and Sardar Patel in parliament. Setting up a false binary between Patel and Nehru is by now a set piece in the Bharatiya Janata Party’s political strategy.

Here, the prime minister and others are not speaking out of an ignorance of history. Rather, they recognise the truism that repeated assertions of half-truths and untruths is a highly effective form of political manoeuvre. The mechanisms of propaganda apart, this approach derives its strength from two crucial facts. First, the Congress has indeed been guilty of downplaying Patel’s contributions for many decades. Second, there is the fact that Nehru’s biological descendants have cynically treated the Congress as a family firm for over five decades now.

While Patel was neglected at the national level, in Gujarat, all political dispensations have deployed him in furthering their own brand of sub-nationalism. Thus, the irony of a dam notorious for displacing many farmers and tribals being named Sardar Sarovar. Sardar was the honorific lovingly bestowed on Patel by the peasants of Bardoli for his contributions to their struggle. However, if retrospectively deploying the politically astute Gujarati Patel against a supposedly deracinated and feckless Nehru is a workable ploy, the Hindu Right recognises the difficulty in dealing with the most famous of all Gujaratis.

Gandhi was a man of the masses and lived and spoke as a Hindu. Throughout his public career, he remained an obstacle to the conversion of Hinduism into a political project based on prejudice, bitterness and hatred. Given his public appeal and the widespread moral revulsion associated with his assassination, the Hindu Right has avoided directly attacking him with the same viciousness that is deployed against Nehru. Instead, it has consistently sought to simultaneously undermine and appropriate the legacy of the Mahatma.

A key element in this long-term approach has been the deployment of symbols and language accompanied by a semiotic shift in their meaning. Such an undermining of Gandhi has now acquired greater salience since it is yoked to the political power of the ruling party. For sure the Congress is also guilty of paying lip service to Gandhi, but Modi’s current strategy of repeatedly associating himself with the Mahatma’s name is bound to have more serious deleterious consequences.

Since assuming power in 2014, Modi has claimed an affinity with Gandhi on two issues, khadi and sanitation. On khadi, Modi has suggested that sales have almost doubled due to his advocacy, although the figures do not hold up against scrutiny. In any event, a man who wore a gaudy, bespoke suit to impress a visiting American president could hardly claim to champion khadi and all that it represents.

While the claims on khadi sales can be verified and refuted, more disquieting is the appropriation of Gandhi’s wider symbolism. Throughout his years in public life, Gandhi was acutely aware of the power of language and the need to deploy it with responsibility. He wrote and spoke with economy and clarity, thereby defining a unique prosodic style. On occasion, he coined new terms to convey ideas with precision. Thus, when his movement in South Africa was repeatedly and incorrectly characterised as ‘passive resistance’, Gandhi coined a neologism – satyagraha.

Satyagraha was designed to convey a more active force than passive resistance. Since its coinage, the term has come to connote the profound political philosophy and method advocated by Gandhi and has found widespread acceptance and recognition world over. A key element of satyagraha is that of militant but non-violent protest against the abuse of social and political power. But in the propaganda on the government of India’s scheme for improving sanitation and public hygiene, satyagraha has been emptied of its potent, resonant meaning and tamed into an anodyne and meaningless term, ‘swacchagraha‘.

Government schemes on khadi and sanitation apart, Modi’s consistent attempts at appropriating the Mahatma’s legacy are most clearly visible in the context of that most vital institution in the Gandhian ecosystem, the Satyagraha Ashram located on the banks of the Sabarmati river in Ahmedabad. 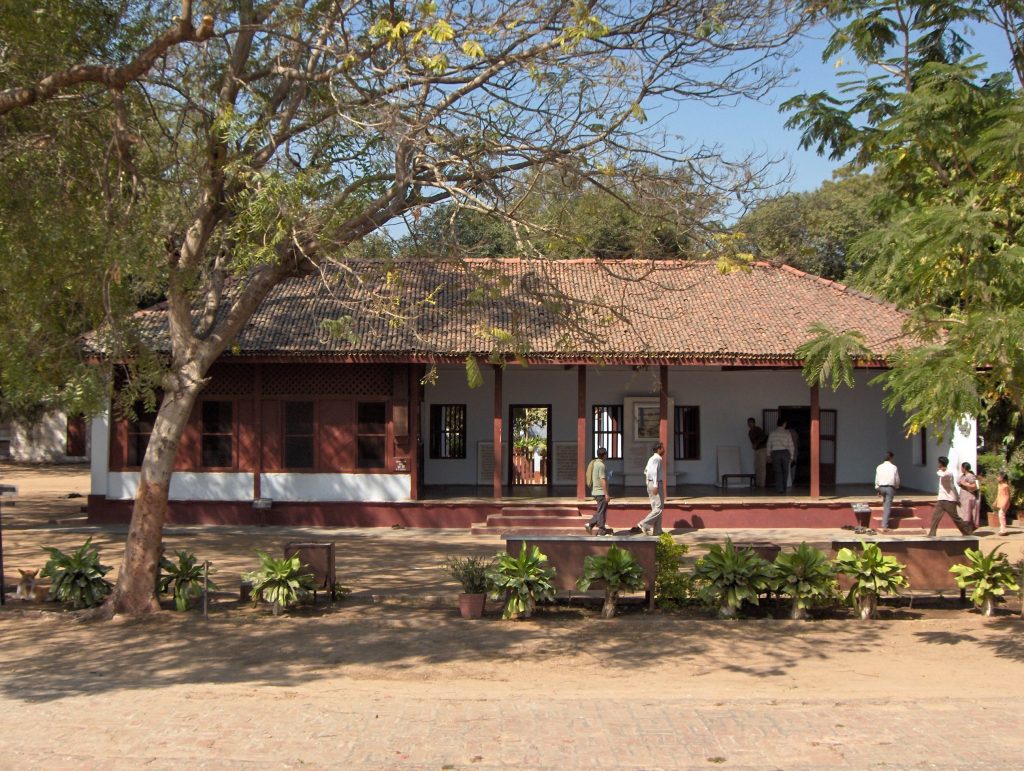 Sabarmati Ashram, as it is popularly known, was Gandhi’s home between 1917 and 1930 and witnessed many a vital moment in modern Indian history. The wonderfully preserved ashram draws thousands of unbidden visitors from across the country and beyond who come to pay homage to the memory of the Mahatma. The presence of such a site in Ahmedabad has been cynically exploited by Modi to further his standing in the presence of visiting global leaders. Thus we have found Modi playing host to the leaders of Japan, China and Israel at ‘Hriday Kunj’, Gandhi’s atmospheric house on the Sabarmati grounds.

Designed for the spectacle of television, the performative aspects of these carefully stage-managed visits are troubling to say the least. The Chinese and Israeli leaders represent some of the most repressive regimes on the planet. As such they, along with Modi’s own government, owe no allegiance to the ideas and values that Gandhi represents. It is a curious spectacle to watch Modi show his visitors around the ashram as if he wholly belonged to it. The incongruity of Modi acting as a Gandhian master of ceremonies was strikingly evident during the recent visit by the Israeli prime minister, Benjamin Netanyahu.

At Modi’s urging, Netanyahu and his wife uncomfortably squatted on Gandhi’s seat located within the enclosed space on the verandah of Hriday Kunj. It is rather disturbing that the Indian prime minister betrays a lack of cultural understanding that Gandhi’s seat should be treated with reverence and not as an interactive museum installation.

This episode is particularly galling if we consider the fact that Netanyahu embodies one of the most hawkish, right-wing worldviews in contemporary times. Even worse, at the time of his visit, both the Israeli PM and his wife were being investigated by Israeli agencies for corruption. The entire sorry spectacle reminds one of what the writer Arundhati Roy – no fan of Gandhi herself – wrote in 2006 when she contemplated an impending visit of George W. Bush to Rajghat to pay tribute to the Mahatma:

“But when George Bush places flowers on that famous slab of highly polished stone, millions of Indians will wince. It will be as though he has poured a pint of blood on the memory of Gandhi.”

Such problematic visits are not the only examples of the appropriation of the Sabarmati Ashram towards dubious ends. In 2017, the ashram celebrated a hundred years of its existence and the National Archives of India has created an exhibition on the ashram premises.

Purportedly meant to convey the historical significance of the ashram, the exhibit is a crude exercise in bureaucratic propaganda. As one mounts the steps of the Gandhi Memorial Museum at Sabarmati, one is greeted by an unaesthetic hoarding that declaims ‘Sabarmati Shatabdi – Ek Karyanjali’. The imputation here is that the appropriate form of tribute to the Mahatma’s memory – and to the ashram – is to be found in the numerous schemes floated by the present government.

This view is more directly and clumsily explicated in a number of panels on which a haphazard selection of words and ideas with a Gandhian resonance are displayed, each incongruously paired with government projects. 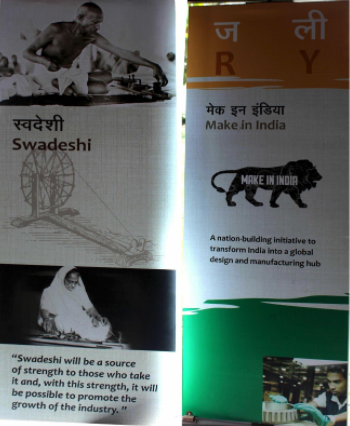 Panel on Swadeshi at the exhibition at Sabarmati Ashram. Credit: Special arrangement

That such juxtaposition makes a mockery of the Mahatma is easily evident if we consider the panel titled ‘Swadeshi’. This panel depicts Gandhi and Kasturba (his wife) spinning on charkhas and carries a quotation: “Swadeshi will be a source of strength to those who take it and, with this strength, it will be possible to promote the growth of the industry”.

This is a mangled version of a quote from a 1919 speech by Gandhi. The industry Gandhi referred to was that of khadi. But shorn of its context, the quotation conveys a very different meaning from that intended by the Mahatma.

The ‘strength’ that Gandhi referred to was one derived from a vow of swadeshi and is quite different from the muscle-flexing version implied here. This becomes evident when we notice its pairing with a panel on the ‘Make in India’ scheme which has little to do with either Gandhi’s notion of strength or that of his brand of swadeshi. In a more mystifying conjunction, a panel on ‘Ethics’ is blithely paired with ‘Jan Dhan, Aadhar and Mobile’ [sic.] as well as the BHIM mobile app. Panel on ‘Mahatma Munshiram’ at the exhibition at Sabarmati Ashram, Credit: Special arrangement

A long-running exhibition on the premises of Sabarmati Ashram is bound to attract the attention of countless visitors. Presenting such addled and problematic material disguised in the name of the Mahatma is bad enough. But the most alarming element of the exhibition is a panel dedicated to one individual.

Given the context, one may presume that this would be an individual with a singularly important association with the Mahatma and the ashram. The reality is nothing of the sort. The panel shows a letter written by Gandhi as well as a portrait of the addressee named as ‘Mahatma Munshiram’. The mystery of this obscure choice in an exhibit to celebrate the centenary of Sabarmati Ashram is resolved if we recognise why he is appealing to the present ruling dispensation.

Munshiram is well-known by the appellation, Swami Shraddhanand. An Arya Samaj leader, Shraddhanand had led a highly controversial shuddhi or reconversion movement and was assassinated by a Muslim man in 1926.

Today India faces some of the gravest challenges to its republican values in a generation. While all regimes since 1947 have been guilty of cynically using Gandhi towards their own ends, the present government presents a most serious challenge to his humane legacy.

Therefore, the prime minister should not be allowed to play a cynical game of running with the hares and hunting with the hounds. He should unambiguously state whether he prefers the legacy of the Mahatma or that of Savarkar and the Sangh. There can be no common ground between these two choices.

But in the spirit of a more constructive argument, one may also recommend to the prime minister a little pamphlet penned by Gandhi in 1941 titled Constructive Programme: Its Meaning and Place. If Modi truly wishes to associate himself with the legacy of the Mahatma, he could begin by paying special attention to the first, penultimate and last items of constructive work therein, i.e. ‘communal unity’, ‘economic equality’ and ‘kisans’.

Venu Madhav Govindu is working on a thematic history of Gandhi’s Sevagram years.