Modi and Shah Want an Opposition-Free India, But They Are Destroying the BJP Too

The party today is a pale, forlorn shadow of its once vibrant self. 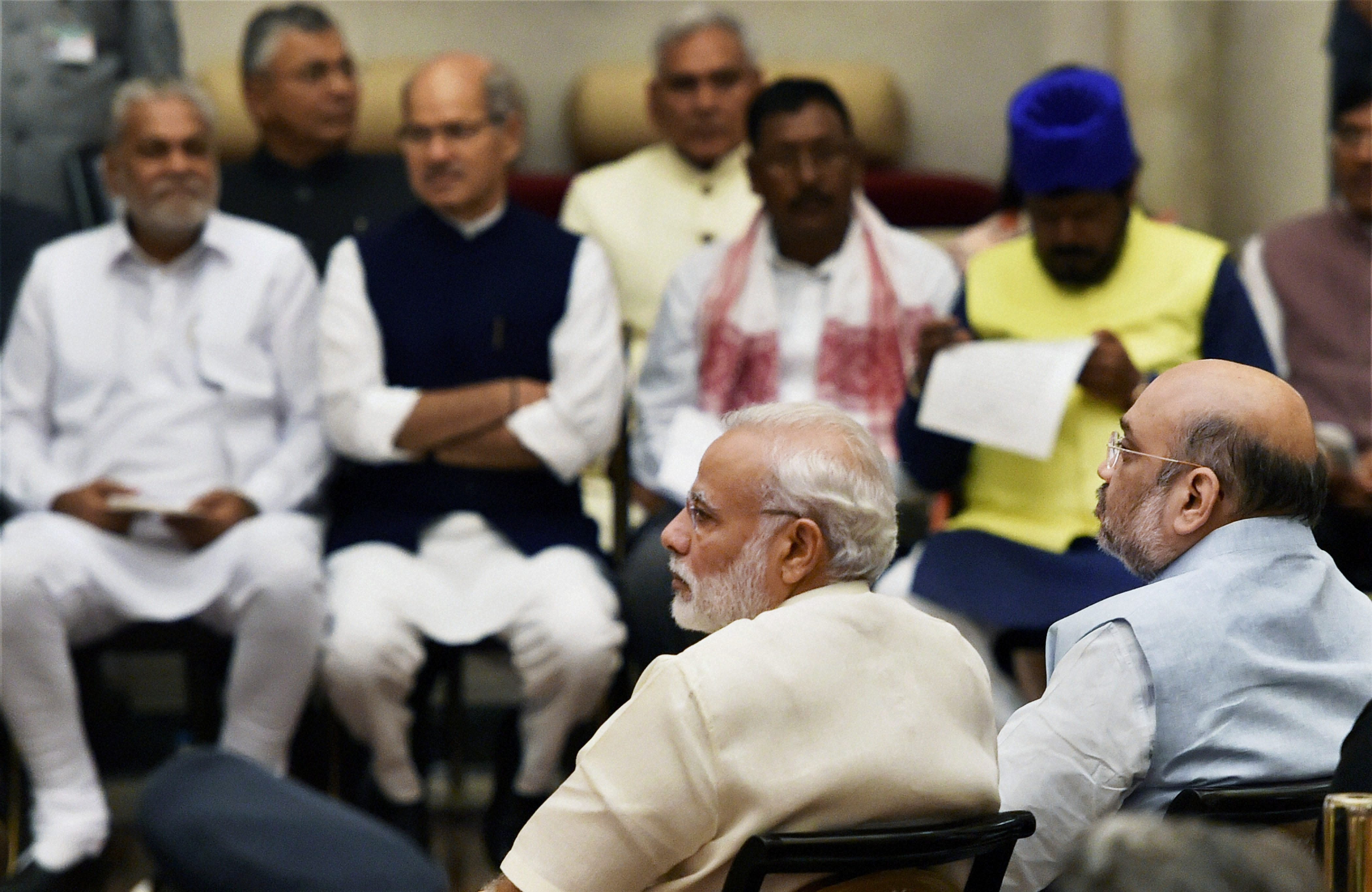 As the all powerful duo of Prime Minister Narendra Modi and BJP president Amit Shah celebrate three years in office and dream of a ‘vipaksh mukt Bharat’, an India without any opposition – a hugely alarming prospect in a democracy – the one party they have truly decimated is the BJP itself.

From a vibrant cadre based party – the only one in India apart from the Communists – where differences were tolerated and several generations of leaders were allowed to come into their own and jostle for primacy, the BJP of Shah and Modi is a two-man party.

The duo rule with an iron hand and the party is a pale, forlorn shadow of its once vibrant self.

Modi’s cabinet resembles an army of chocolate cream soldiers. No minister has any real power or veto and some laugh sarcastically if you ask about the idea of “primus inter pares” – the first-among-equals role that the prime minister is meant to play in the Westminster cabinet system that India modelled its parliamentary system on.

Says a minister who holds an important portfolio but who apparently now has only notional powers, “First among equals. What is that? We don’t say a word in cabinet. Every thing is pre-approved by Modiji and the all-powerful officials of the PMO. We are a silent rubber stamp. Modiji does not like any discussion, let alone debate. Why do you think Manohar Parrikar was so keen to go back to Goa and other senior ministers to UP? Better to be a chief minister in a state than a prisoner in a gilded cage at the Centre. From one to 100 it is only Modi and then Amit Shah and then no one.”

This may be the lament of one minister but there is a ring of truth to this when one considers that after Parrikar left for Goa in March, India has been without a full-time defence minister, with the trusted Arun Jaitley being given additional charge yet again. This, despite serious violence and drift in Kashmir, and the incident of Pakistan crossing the line of control (LoC) and killing and beheading two soldiers on May 1. Authoritative sources say that Modi is still undecided about appointing a full-time defence minister and feels no real pressure to do so.

Decision-making is totally centralised in the PMO and has been reduced to “spectaculars” such as demonetisation or the so-called “surgical strikes”, which are assessed for their political yield and their ability to be marketed as “master-strokes” by an unquestioning media. Which is why the government is refusing to give a straight answer on who actually decided on demonetisation – whether it was recommended by the ‘autonomous’ Reserve Bank of India or the PMO – despite a slew of RTI petitions demanding to know.

In sum, Modi has entirely dispensed with the norm of the cabinet taking and owning collective decisions. Recently, Ram Madhav – the all powerful RSS pracharak now on secondment to the BJP, who is now the final authority on J&K while not holding any government portfolio – said “Modi is moving India towards a presidential system.”

That explains why Union home minister Rajnath Singh is never consulted on any issue which falls within his ministry’s domain. The same is the case with Sushma Swaraj, who is nominally minister for external affairs but who functions as a sort of Mother Teresa of Twitter, helping Indians around the world in distress. A laudable endeavour no doubt but hardly the only thing that falls in the external affairs minister’s remit. Foreign policy is left to Modi and his all powerful national security advisor, the 70-plus ex-spy Ajit Doval, who has no domain experience of foreign affairs.

Before Modi reduced the cabinet to a rubber stamp, he ensured his dominion over the BJP. Leaders senior to him such as the two founders of the party, L.K. Advani and Murli Manohar Joshi, the second and third presidents of the BJP, were sent off to a newly created old age home called the ‘margdarshak mandal’. For the record, the ‘mandal’, which also includes Yashwant Sinha, has not even held one meeting. And it was supposed to be providing ‘direction’ to Modi.

After this was served to the BJP as starters by the Modi regime in its first days in office, leaders who had earlier been opposed to him such as Swaraj and the three-term chief minister of Madhya Pradesh, Shivraj Singh Chauhan, all fell in line.

Contrast the anaemic BJP of today with the party when Atal Bihari Vajpayee was prime minister. While Vajpayee was supreme, he did not throttle dissent with an iron hand. Ministers publicly disagreed with one another and jostled for supremacy. There were recognisable faces as ministers; now Shah has reduced the BJP to using Modi’s image to fight even municipal elections – as he successfully did in Delhi recently. Earlier, despite the Delhi BJP having popular leaders of the calibre of Dr Harshvardhan, a political lightweight like Kiran Bedi was fielded as the party’s chief ministerial candidate. Harshvardhan himself was removed abruptly as health minister for reasons that were never explained. 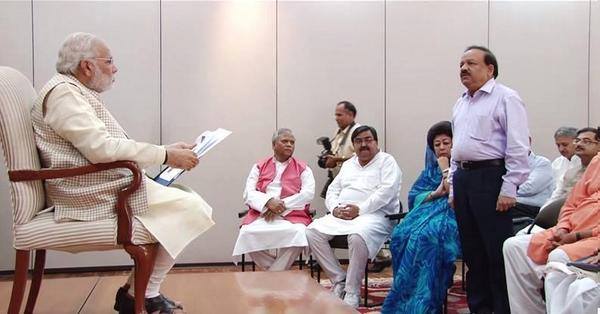 Cabinet minister and senior BJP leader from Delhi Harshvardhan stands to attention while speaking to Prime Minister Modi in this file photo from 2014. Credit: PMO

Shah has ensured that he has remade the BJP in Modi’s image. No other leader is allowed centre-stage; only ‘saheb’, as he refers to Modi, is allowed to shine.

Modi today has dwarfed the BJP and looms over the diminished party like a colossus. For an erstwhile cadre-based party, the BJP has caved in very easily to Shah. To fight every election, he imports his trusted team from Gujarat, while the local cadre is sidelined and dogged by a trusted aide of Shah for the duration of the campaign.

All decisions such as seat allocation and ticket distribution are left to Shah, who does not consult any state leader but depends upon his own “surveys” and inputs. Shah has been given a completely free hand by Modi to sideline anyone with an independent mind. The case of Varun Gandhi is illustrative. The 36-year-old MP from Uttar Pradesh is disliked by Modi and Shah on account of his last name and his blunt refusal to target the Gandhi family. His ruthless sidelining is an example to the party. Gandhi has not changed. It’s just that the BJP in its earlier avatar made room for him but Modi and Shah do not brook any compromise.

Modi is the only electoral issue and once power is won, a nondescript pracharak or leader is anointed as chief minister, as Manohar Lal Khattar was in Haryana. These straw men without any mass base suit Modi and Shah. The Sangh is also pleased that “faithful workers” are getting rewarded and will be guided by the RSS, which knows best. It is not a coincidence that soon after Khattar and Devendra Fadnavis were sworn in, Haryana and Maharashtra passed draconian cow protection laws.

Modi had campaigned frenetically on the issue of “good governance”. Neither he nor Shah mention it any more. The agenda for 2019 is set and it’s going to be a repeat of the recent Uttar Pradesh assembly elections, where the BJP did not give a ticket to a single Muslim. This explains the selection of Adityanath, who has to ensure that the BJP wins big in the state in the next Lok Sabha election.

Says a senior BJP leader sadly, “As long as Modi and Shah keep winning elections, the party and the Sangh will never question them. But, sometimes I miss the old BJP – where leaders came from the cadre and eccentricity had a place. I still remember Atalji saying in parliament when the opposition was telling him not to budge on some issue, “Mat bhuliye, Atal toh hoon, lekin Bihari bhi hoon”.

Swati Chaturvedi is a Delhi-based journalist and author of I Am a Troll: Inside the Secret World of the BJP’s Digital Army. She tweets at @bainjal.