The Year of Madison Square Modi

As assembly elections approach and the prime minister spends his energies on proving demonetisation was a good idea, a Modi-led propaganda blitz is coming our way.

A painter reacts as he creates a portrait of India's Prime Minister Narendra Modi before Modi was scheduled to speak at Madison Square Garden in New York, during his visit to the US, September 28, 2014. Credit: Reuters/Lucas Jackson 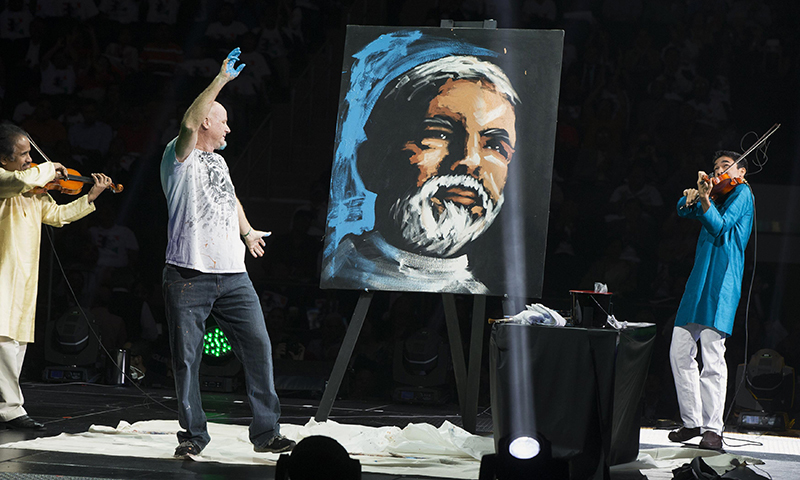 A painter reacts as he creates a portrait of India’s Prime Minister Narendra Modi before Modi was scheduled to speak at Madison Square Garden in New York, during his visit to the US, September 28, 2014. Credit: Reuters/Lucas Jackson

Give it up for 2017, which will likely make 2016 seem like a stroll through a garden in spring. It will be defined by the man who ought to be called Madison Square Modi.

If the previous year was, as pro-government economists and trolls insist, of ‘big bang’ economic reform, this will be the ‘demonetisation did it’ year. Industrial production, manufacturing, agricultural productivity, farm income and job loss figures will be measured to review Prime Minister Narendra Modi’s personally managed slash-and-burn adventure of a currency swap that turned the economy into an internal insecurity issue overnight.

For Modi, to be seen to do right and be right will be as important as being right. After all, his success or failure will drive the foreseeable future of the BJP and certainly his own. The distancing from currency swap frenzy by key allies and the cautionary notes put out by the BJP’s ideological guides are enough indications that should any adverse political impact accrue, the knives will be out for Modi and his inner circle.

To counter this, Modi’s greatest weapon will remain propaganda. He has employed a mix of ‘demonetisation’ truths (there will be greater accountability of personal incomes, enforced digitisation of transactions will decrease overall use of cash), untruths (terrorism, rebellions, counterfeiting, black money and corruption will disappear) and obfuscation and denial (ignoring currency swap-related deaths, joblessness among casual and migrant labour, plummeting prices of farm produce, that funds of political parties remain above scrutiny and accountability that citizens are subjected to). To strengthen his hand, he has repeatedly trotted out the trope of patriotism.

This patriot act, as it were, will subsume everything.

Modi’s year-end speech was peppered with thus far held back subsidy sops for women, not entirely convincing interest-earning sops for the elderly, uncertain gains for farmers through a reengineered credit system and interest subsidy for low- and mid-bracket home loans. These are to pacify some groups perceived as being hit among the hardest by brutal currency swap parameters and woefully inadequate cash supplies that exist today, beyond the 50-day grace period requested by Modi.

More sops are likely in the run-up to the Union budget in February and general elections to assemblies of five states, through February and March: Manipur, Goa, Uttarakhand, Punjab and Uttar Pradesh. Late 2017 will see prepping for assembly elections in Himachal Pradesh, Meghalaya, Tripura, Nagaland and Gujarat, Modi’s forever turf.

This will unleash a barrage of Modi and a ratcheting up of propaganda, rhetoric and marketing to levels unmatched since the general election to parliament in mid-2014 and Modi’s subsequent victory tour across India and the people of Indian-origin world – most notably a rockstar-like appearance at New York’s Madison Square Garden that September. His cheerleaders will continue their barrage of invective to dismiss critics, both political and in the arena of civil rights and human rights – especially with regard to freedom of information and expression, those who question Modi’s past in Gujarat and those who question strong-arm measures to acquire land and push through projects, among several other unsavory aspects of this government. Expect more government scrutiny and litigation against such individuals and organisations. With notable exceptions, much of the media already appears cowed.

This return to Madison Square Modi will, unfortunately, inundate the good, such as a genuine push to make central administrative services work better, BJP’s return to the path of a goods and services tax regime, and a determined geopolitical projection and foreign policy gains. And it’s not as if there aren’t loose and flapping ends to secure, such as laudable Modi-trumpeted projects like cleaning of the Ganga, the Swachh Bharat Abhiyan and Make in India.

Besides, Modi will certainly seek to mask his government’s abject failures in Jammu and Kashmir, where it is a partner in government, the mess that is the Naga peace deal and absence of initiatives to resolve the Maoist rebellion such as overtures for peace talks with folks who are decidedly Indian.

But that is the realm of governance, once Modi’s calling card, one that saved him from the fires of Gujarat nearly 15 years ago. After the blitz of demonetisation and the imminent blitz of elections, all that will wait. There are now other imperatives. Modi is already cast as India. It is only a tiny sycophantic step to cast India as Modi.

Sudeep Chakravarti is the author of several books, including Clear.Hold.Build: Hard Lessons of Business and Human Rights in India, Red Sun: Travels in Naxalite Country and Highway 39: Journeys through a Fractured Land. He regularly comments on matters of political economy, conflict situations and the convergence of businesses and human rights.