The prime minister has been caught on the wrong foot about facts that have been disproven by a simple peek into the history books. 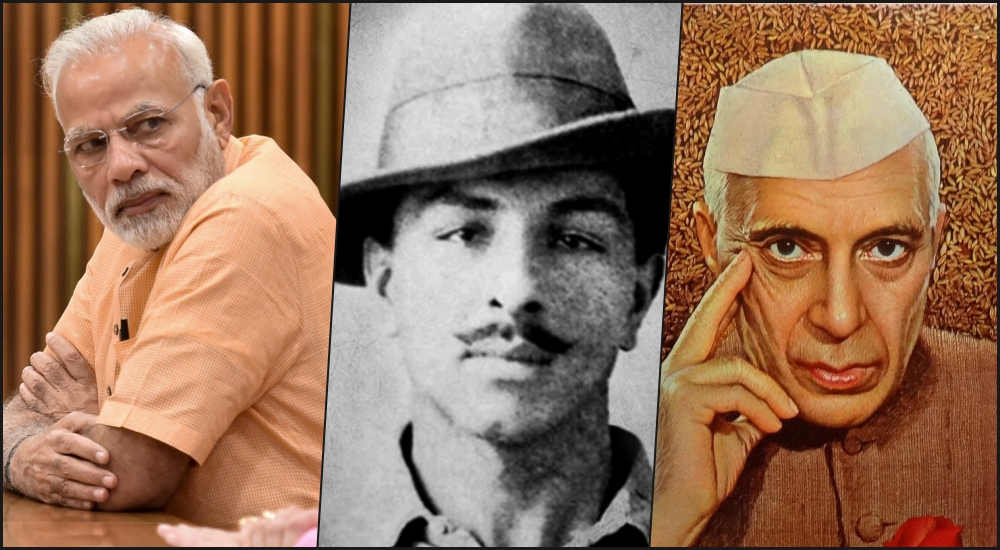 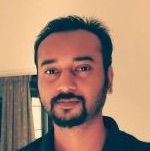 “When Shaheed Bhagat Singh, Batukeshwar Dutt, Veer Savarkar, greats like them were jailed fighting for the country’s independence, did any Congress leader went to meet them? But the Congress leaders go and meet the corrupt who have been jailed,” said Prime Minister Narendra Modi at an election rally in Bidar, Karnataka on May 9.

In a no holds barred attack on the Congress party, Modi asserted that no Congress leader had visited Bhagat Singh, B.K. Dutt and Vinayak D. Savarkar when they were under imprisonment during British rule. Congress leaders instead choose to visit those who have been jailed for corruption.

When Shaheed Bhagat Singh, Batukeshwar Dutt, Veer Savarkar, greats like them were jailed fighting for the country’s independence, did any Congress leader went to meet them? But the Congress leaders go and meet the corrupt who have been jailed: PM @narendramodi

Karnataka votes on May 12 and the run up to the election has witnessed fierce campaigning. PM Modi had earlier been caught on the wrong foot when in a poll rally, he made the false claim that General Thimayya had been insulted by former PM Jawaharlal Nehru in 1948. The prime minister has now once again made a reference to history in his speech at Bidar. Alt News fact-checked Modi’s claim.

Is it true that no Congress leader met these jailed freedom fighters?

India’s first prime minister Jawaharlal Nehru in his autobiography Toward Freedom: The Autobiography of Jawaharlal Nehru recalls his meeting with Bhagat Singh when the latter was imprisoned in Lahore jail in 1929. It may be recalled that Bhagat Singh and Batukeshwar Dutt were arrested after they exploded bombs inside the Central Legislative Assembly in Delhi in April, 1929. Nehru writes:

“I happened to be in Lahore when the hunger strike was already a month old. I was given permission to visit some of the prisoners in the prison, and I availed myself of this. I saw Bhagat Singh for the first time, and Jatindranath Das and a few others. They were all very weak and bedridden, and it was hardly possible to talk to them much. Bhagat

Singh had an attractive, intellectual face, remarkably calm and peaceful. There seemed to be no anger in it. He looked and talked with great gentleness, but then I suppose that anyone who has been fasting for a month will look spiritual and gentle. Jatin Das looked milder still, soft and gentle like a young girl. He was in considerable pain when I saw him. He died later, as a result of fasting, on the sixty-first day of the hunger strike.” 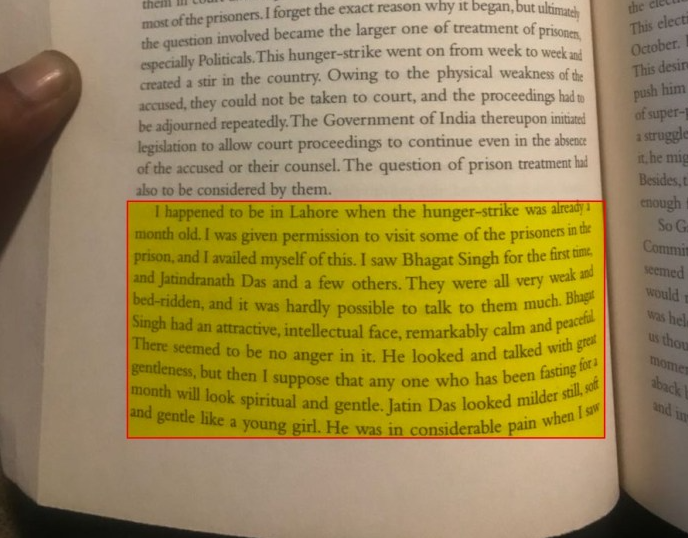 In fact, this event of Jawaharlal Nehru visiting Bhagat Singh and Batukeshwar Dutt who were lodged in Lahore jail was reported by The Tribune in its editions of August 9 and August 10, 1929. It may be noted that in 1929, The Tribune was based in Lahore. The reports that appeared in The Tribune regarding the said event are reproduced below from The Tribune archives.

“Pandit Jawaharlal Nehru, accompanied by Dr. Gopi Chand, M.L.C, visited the Lahore Central and Borstal Jails today and interviewed the hunger strikers in the Lahore conspiracy case. Pandit Jawahar Lal first went to the Central jail where he met Sardar Bhagat Singh and Mr. B K Dutt with whom he held conversations about the hunger strike. After meeting these two prisoners he went to the Borstal jail where he met the other hunger strikers including Jatin Das, Ajoy Ghosh and Shiv Varma who were lying in hospital.” 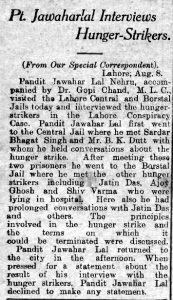 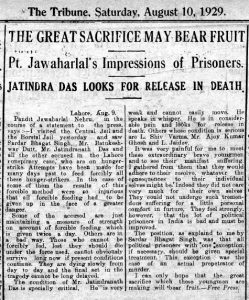 The report of August 10, 1929 carried Pandit Nehru’s statement expressing his views and serious concern about the health of the hunger strikers.

Alt News spoke to Professor Chaman Lal who is a retired professor at Jawaharlal Nehru University and author of the book, Understanding Bhagat Singh. Professor Lal said: “Bhagat Singh’s relationship with the Congress was a love-hate relationship. Bhagat Singh’s family was part of Congress. His father was a Congress activist. Bhagat Singh had also attended Congress sessions with his father. Bradley Hall in Lahore where the Punjab Congress headquarters was based was used by Bhagat Singh and others for the Punjab Naujawan Bharat Sabha meetings. Both Jawaharlal Nehru and Motilal Nehru had met Bhagat Singh numerous times during the Lahore trial. Motilal Nehru had even formed a committee to press for the demands of the prisoners lodged in jail who had begun a fast unto death seeking humane conditions. Also, Jatin Das who became a martyr when he succumbed to his fast-unto-death, was attended to by Dr. Gopichand Bhargav who was Punjab Congress President and a regular visitor at the prison. There is no doubt that Bhagat Singh and Congress had very strong differences, but the Prime Minister’s claim is not true at all.”

While it is true that Bhagat Singh’s ideology and methods were not in consonance with Congress’s strategy which relied heavily on the Gandhian method of mass struggle, it is a fact that Jawaharlal Nehru had met Bhagat Singh when the latter was imprisoned by the British in 1929. Thus, there is no substance to PM Modi’s claim that no Congress leader had visited the heroes of the freedom struggle when they were jailed by the British.

This article originally appeared on AltNews.