In Modi's Meeting with Kashmiri Leaders – Speaking Was the Deal, Listening Was Optional

That the PM could spare so much time on such an exercise suggests that Modi wanted to reinforce the Stockholm Syndrome among Kashmiri politicians, who don't need much persuasion to feel grateful towards those they deem as oppressors. 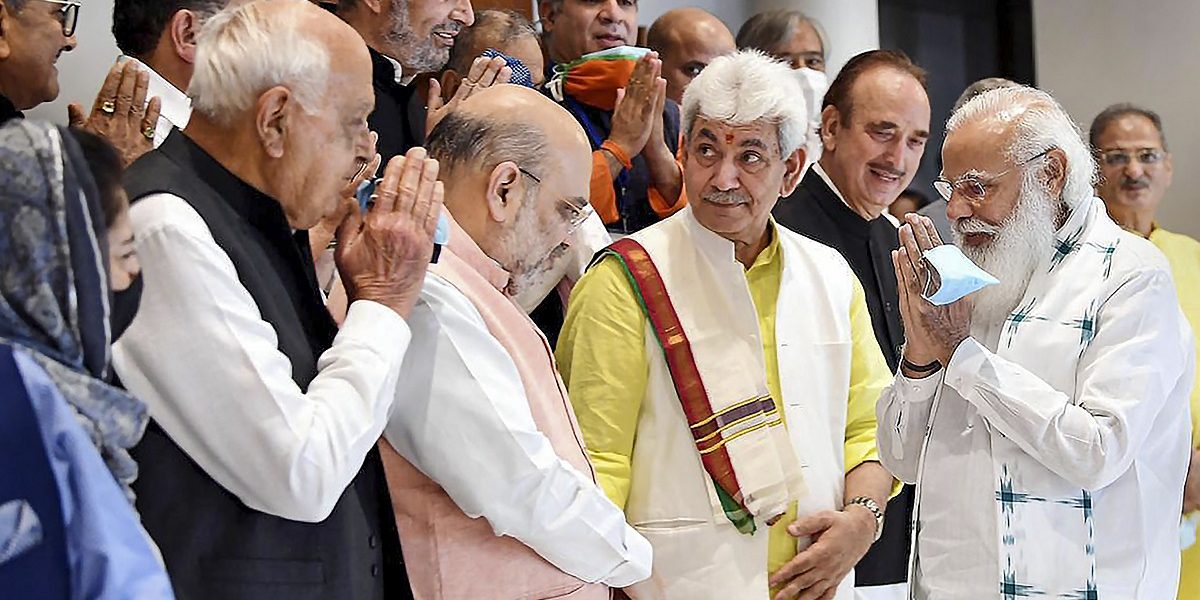 The most remarkable aspect of Prime Minister Narendra Modi’s June 24 jamboree with Kashmiri politicians was not that he spent over three hours with those ministers who had been frequently labelled as the ‘Gupkar Gang’ and ‘anti-national’. It was the fact that everyone spoke extensively and, apparently openly, yet no one listened to anyone. Of course, a few leaders could not get the speaking slot like former chief minister Omar Abdullah, probably because his father, another former chief minister, Farooq Abdullah spoke for both of them.

Like a theatrical ensemble, everyone had a bit part in which they said their lines, then stepped back for the next character to say hers. Saying your lines was the deal. Listening, was optional. Hence, why exercise an option when one can go through the motions without it. Especially, when listening might have created the misunderstanding of a discussion. Consequently, it was as if the political leadership from the former state and the Centre were walking on the opposite banks of river Jhelum, plodding along their own paths, smiling and waving at one another from afar. But no matter how far they walk together, banks don’t meet.

The fact that the prime minister of the country could spare so much time on an exercise which did not need his presence at all suggests only one thing: that Modi wanted to reinforce the Stockholm Syndrome among the Kashmiri politicians, who usually do not need much persuasion to feel grateful towards those they deem as oppressors. And so, even before they arrived in New Delhi, they were already favourably disposed towards the supreme leader. The meeting only strengthened that sentiment. Plus, it also produced a group photo for posterity. May they enjoy looking at it for years to come.

The consequence of the meeting

That nothing of any consequence would come out of this meeting was a foregone conclusion, feverish speculation in the Valley notwithstanding. There are several reasons for this.

First, there is no pressing reason for the Government of India to restore statehood to the Union Territory of Jammu and Kashmir. What is happening there has no bearing on national politics, at least in popular perception. On the contrary, the idea that the ‘pampered’ Kashmiri leaders and people have been cut to size continues to be lucrative electorally amongst voters which form the core constituency of the ruling party. Besides, once the post August 5 restrictions lifted, the quality of life of the average citizen returned to what it was during the statehood; between shutdowns, curfews and cordon and search operations. Since the problem in Kashmir is not of democracy (its presence or absence), it is immaterial who administers them. The only people directly affected are the mainstream politicians, derisively referred to as Unionists by the locals. And this leads to the second reason.

The June 24 meeting was the first step towards humouring the local politicians. The fact that the prime minister spent so many hours with them will sustain them and possibly their constituencies for a few months, maybe even a year. They understand this. This is the reason they have been holding press conferences in Srinagar telling the people through the local media how critical the meeting with the prime minister was and how forcefully they put across their points.

Also read: J&K All-Party Meeting: How the Modi Govt Made a Virtue Out of Necessity

The import of June 24 was summed up by Sajad Lone in these words: “I don’t think there was any single leader who did not make their people proud. All parties, especially from the Kashmir region made their people proud. All spoke well and reflected the pain of the people of Kashmir… in a befitting manner… As on date, there are no winners and losers. It is a long process. And we have to make an enabling environment for facilitating delivery…” Lone had stayed back in Delhi after the grand meeting. He held his press conference in Srinagar only on July 1, 2021.

It is likely that more such engagements may happen until the next general elections to maintain the illusion of communication. It will also give a semblance of struggle to the Kashmiri leaders.

Third, the reading down of Articles 370 and 35A on August 5, 2019 was not a political gimmick aimed at pleasing a particular vote bank. It was an article of faith for the ruling Bharatiya Janata Party; an unfinished agenda so to speak, of its precursor the Bharatiya Jana Sangh. After all, its founder Shyama Prasad Mukherjee laid down his life for the cause of total merger of the state with the Union of India! This was one policy decision that had nothing to do with the idea of progress or ‘making India great again.’ This was purely an ideologically driven move. Whatever one may fault the present-day BJP for, in one respect, it is above reproach – commitment to its ideology as far as Hindu-Muslim relations are concerned. The erstwhile state of Jammu and Kashmir has to be seen through this prism. Given this, the BJP would loathe to reverse the August 5 decision.

Fourth, even restoration of statehood to Jammu and Kashmir would take time. After all, there was a reason why Ladakh was made a separate UT, and Jammu and Kashmir, as artificial a construct of unity as Ladakh was, was clubbed together as one entity. The clue to what lays ahead can be found in the last assembly elections that were held in the state in 2014. The BJP and People’s Democratic Party won the state with 25 and 28 seats, divided by the Pir Panjal range and formed a coalition government.

The erstwhile state of Jammu and Kashmir that comprised Jammu, Kashmir and Ladakh, was the only Muslim majority state in post-independence India. Contrary to popular perception, even the divisions of Jammu and Ladakh had Muslim majority, howsoever slim. Of the total 87 assembly seats, Kashmir division had 46, Jammu 37 and Ladakh four. When the BJP chanted the slogan of Mission 44 in the run-up to the elections, it was hoping for a clean sweep in Jammu and Ladakh with a couple of seats in the Kashmir Valley. Unfortunately, the Muslims of Jammu didn’t vote for it. Neither did the Ladakhis. And the BJP had to contend with only 25 seats.

The delimitation exercise that is underway, aims to make Jammu more amenable for the BJP. While the seat share between Jammu and Kashmir may be rationalised, the larger purpose is to ensure that in no constituencies of the Jammu division should Muslims become a decisive vote. Once this is achieved, it is likely that Jammu will be declared a state; and Kashmir will continue to be a UT because of the security situation.

And fifth, the reading down of Articles 370 and 35A and the diminution of the state into two UTs has given the Centre a very long rope to work backwards. From its perspective, as long as it maintains the façade of working towards restoring statehood it is under no pressure to do anything until after the next general elections. Occasional interaction with the Kashmiri politicians will keep them in business too, and why should they have a problem with that.

Also read: Does Modi’s Meeting with Jammu and Kashmir Parties Signal a Thaw or a Trap?

Unfortunately, there are three spoilers to this dream sequence – the ‘sentiment’, Pakistan and China. While there are no signs that the Kashmiri sentiment for azaadi has abated, both Pakistan and China have dug their heels. Anything less than restoration of pre-August 5 status is unacceptable to them. Worse, restoration of Articles 370 and 35A would not be an end in itself. It would merely be a reinstatement of the status quo, from where the process towards resolution may begin.

With the US’s exit and Taliban’s reclamation of Afghanistan, Pakistan and China will have the wide sweep from Xinjiang to Afghanistan. If Pakistan manages significant influence over the Taliban and China is convinced that there would be no export of radicalisation into Xinjiang, the Wakhan corridor maybe opened for trade. Clearly, none of this will leave Kashmir unaffected. These possibilities are likely to give wings to the sentiment which refused to die over the last 70 years. Do recall that the so-called separatists are lying dormant right now because they are still under house arrest. They are not dead. We don’t yet know their power of the street when they come out. Or if somebody else will take their place in the next few years.

The Government of India has been sanguine because of the relative peace in the Kashmir valley. Sadly, peace is a chimera; induced by several factors, COVID-19 being one of them. But if despite that, military operations are continuing and encounters happening, it only suggests that the surface calm is an illusion.

Talking is important. But more important is talking to the right people.

Ghazala Wahab is executive editor FORCE magazine and the author of Born a Muslim: Some Truths About Islam in India.