Why Did Fishermen in Bharuch Wave Black Flags at Narendra Modi?

The Bhadbhut weir project on the Narmada river, which the prime minister inaugurated, will ruin their livelihood, the fisherman say. 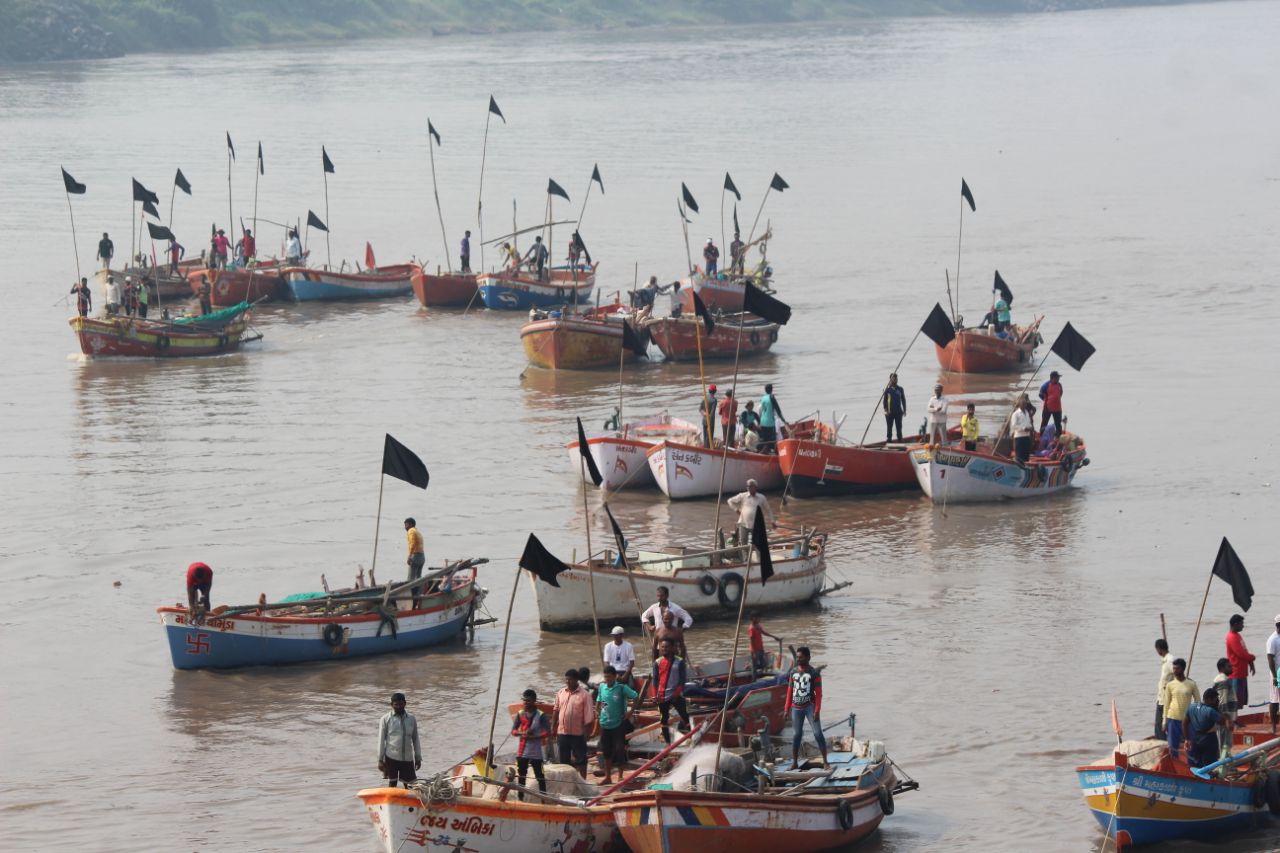 The Rs 3000-crore project is part of the ambitious Kalpasar project, worth close to Rs 60,000 crore. The larger project aims to build a 30 km dam across the Gulf of Khambhat, as well as the world’s largest fresh water reservoir in the sea.

Approximately 250 fishermen rowed 40 boats with black flags along the Golden Bridge on the Narmada at Bharuch, while shouting slogans against the project. The protesting fishermen were detained at around 11 am. After the men were detained, women of the community who had gone to attend Modi’s programme were pushed out of the venue and detained in a conference hall near the office of the superintendent of police. They were released at around 5 pm, only after Modi left the district.

“The barrage will block the river Narmada at Bhadbhut, a village which lies on the estuary of Narmada. This will disrupt the delicate balance of fresh and sea water in downstream Narmada, which is a breeding ground for Hilsa and other fish. Close to 15,000 families who depend on fishing in this 100-km stretch will be affected,” said Kamleshbhai Madhiwala, president of the Samast Bharuch Zilla Machimar Samiti.

The Bhadbhut barrage will be constructed 5.15 km downstream of Bhadbhut village and 25 km upstream of the river’s mouth. When the tide lifts, the water travels 60 km from the sea shore and upstream of the estuary.

“The barrage is expected to cut off the flow of sea water in the river immediately, affecting the yield of Hilsa, a marine fish that arrives in the backrish water of the estuary for spawning,” M.S.H. Sheikh, an environmentalist and president of the Brackish Water Research Centre, a Surat-based NGO, told The Wire.

The fishermen community in Bharuch has been protesting, asking the government to save their livelihood, since 2010. Fishing in the Narmada estuary has been the backbone of the coastal district. With Hilsa, prawns, Mahaseer and more than 80 other varieties of fish, the yield used to be as high as 10,000-15,000 tonnes a year, with the annual revenue of Rs 500 crore. The first blow came with the building of the Sardar Sarovar Dam, whicht cut down the annual yield drastically to about 4,000 tonnes. The area is now home to only a dozen varieties of fish, the Hilsa being the most prized of them all.

“The primary share of our revenue comes from Hilsa. The fish is sold to either Kolkata or Mumbai fish wholesale merchants, and fetches anything between Rs 800 and Rs 1,500 for a kg. So 80% of our income pours in the months of July and August, when it is peak season for the upstream migration of the fish,” Madhiwala explained.

Also read: Narendra Modi’s ‘Gift’ to the Nation Is Set to Submerge Lakhs of People

“We are not rich fishermen with fishing trawlers. We own small boats that our men take out to sea for 8-10 days a month. The preparation for one such trip costs Rs 20,000-25,000. Our earnings have dropped by half since 2004, after the Sardar Sarovar dam was built. If the Bhadbhut project is completed, the breeding ground of the Hilsa will be wiped out and our incomes will disappear completely. The last two years have been the worst for us. We could not even earn back what we invested on a fishing trip. After a good monsoon catch, it is wedding season for our community during October and November. But families don’t have money this year, so we are thinking of organising mass wedding,” he added.

In 2013, more than 1,000 fishermen and farmers of Bharuch had raised concerns about the environment and their livelihood, and protested against the projected in an environmental public hearing which took place in Bhadbhut. Activists had pointed out that the environmental impact assessment (EIA) had neither considered the damage that the project will bring upon fishermen’s livelihoods, nor had provision for their rehabilitation.

However, the Gujarat government had claimed, according to the minutes of the meeting put up on the website of Gujarat Pollution Control Board (GPCB), that it has received huge support for the project. It said that out of 54 written representations received regarding the public hearing, 32 were in favour of the project.

Noticeably, the 32 positive representations were either from industries functioning from the Gujarat Industrial Development Corporation, Ankaleshwar or were trade association operating around the Bhadbhut region, including the Ankaleshwar Chemical Dealers Association, Panoli Industries Association, Industrial Solvents and Chemicals Private Limited, and Cadila Healthcare Limited. It is interesting to see that some of the applications, written in English, are identical in language and content.

In 2016, the fishermen had threatened to launch an agitation to stall the construction of the barrage. The activists maintained that the EIA report prepared by the National Environmental Engineering Research Institute is pro-industry and not sensitive towards the fishermen. 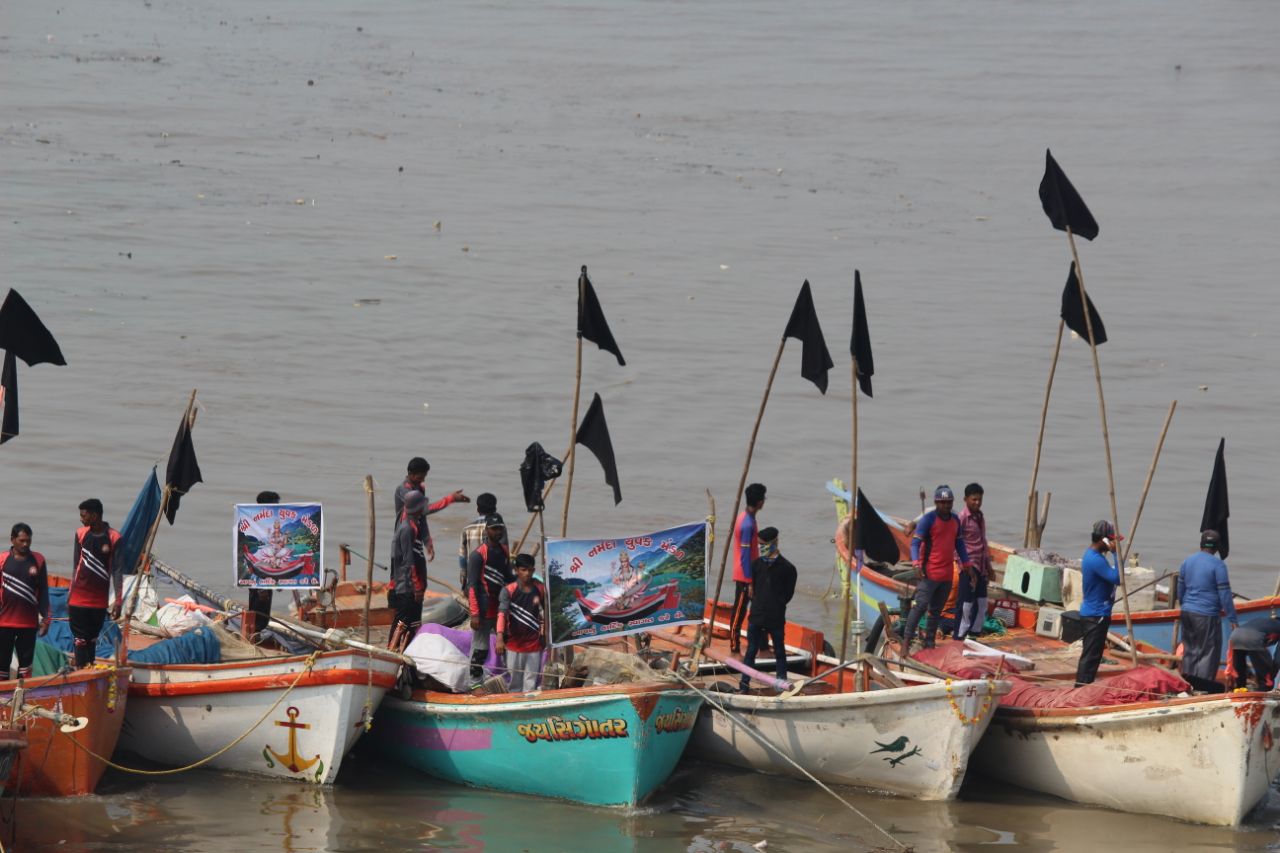 “There is no assessment made about the loss that would be incurred by the fishermen, nor was there any provision for their rehabilitation. Pollution from the GIDC Ankaleshwar was already affecting the fishes; the situation has gotten worse after the Sardar Sarovar dam was built. Prime Minister Modi in his speech said the Bhadbhut barrage will stop salinity ingress along the Narmada and will help supply water to both people and farmers. But what he doesn’t mention is that this was never a problem for either farmers or other people until the Sardar Sarovar dam came up,” said Himanshu Thakkar, coordinator of the South Asia Network on Dams, Rivers and People.

“The Narmada is a perennial river and water used to reach the sea all through the year. After the Sardar Sarovar dam became operational, it only reaches during the monsoon months, when the river overflows or when hydel power is generated from river bed power house, due to which water has to flow downstream. Since the year 2016, even that has stopped. Locals have said that there has been no flow of river water into the sea in last two years,” added Thakkar.

“Salinity has increased downstream in the last two years. If the authorities had released the required water from the Sardar Sarovar dam, the situation would not have been so bad. It is a man-made problem, and now they are telling us building a barrage will stop the salinity ingress,” claimed Madhiwala.

Most of the fishermen from the 15,000 families who live between Navagam and Dahej have been in the profession for generations have no access to formal education. If fishing is taken away from them, most will be left with no employment options.

“For seven years, we have knocked on all possible doors. About 30 memorandums have been sent to the office of district collector, GPCB, concerned central ministries and office of the chief minister, but nobody cared to even respond so far. Nobody is willing to even hold a talk with us,” Madhiwala said.

“We will keep protesting and will observe October 8 as a black day every year. It is more than fight for our livelihood, it is the fight for our existence and our mother Narmada, who feeds us,” he added.