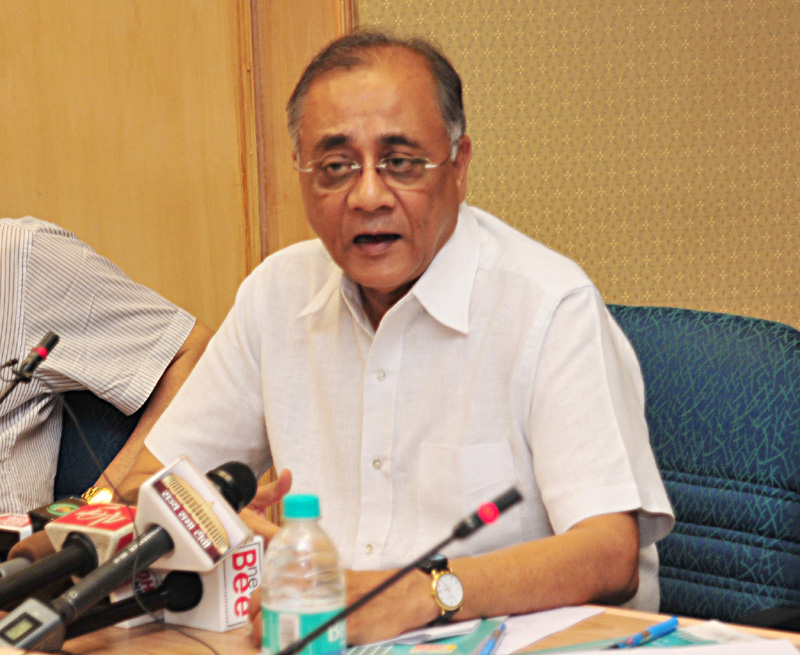 V. Kishore Chandra Deo is a senior Congress leader who is known for his work on welfare and rights for tribals. From his time as the tribal affairs minister in the UPA-II government, he has several initiatives to his name.

As a parliamentarian, he has chaired several committees including the joint parliamentary committee on the forests rights Bill in the 14th Lok Sabha, the Committee of Privileges and the panel that looked into the cash for votes scam.

The former Congress general secretary, who now heads the newly-formed Adivasi Department of the All India Congress Committee is sharply critical of the Narendra Modi dispensation for dealing “body blows” to tribal rights in various ways.

In an interview to The Wire, Deo accuses the government of not only “doing nothing to maintain sanctity of constitutional safeguards for the protection of tribals”, but “going ahead with bulldozing” them.

“This government is not only anti-tribal but hostile to tribals”.

Deo dismissed suggestions of the Congress taking a backseat on the leadership issue to bring about opposition unity in the 2019 polls to defeat the BJP.

Amid frequent poll debacles faced by the party, Deo had created a flutter some time back by demanding that 15-20 leaders should be sent on forced holiday, insisting that “rootless wonders” are responsible for the party’s rout.

As a former tribal affairs minister, how you see the record of the Modi government on this issue?

It is a [tragedy] that mining leases are being given by this government with scant respect for constitutional provisions and the safeguards guaranteed by our founding fathers to the forest dwellers. They are going ahead with bulldozing [these safeguards].

The Rs 7,500 crore for separate grants for scheduled areas has stopped, as well as the Rs 30 crore for every district affected by Left-wing extremism.

The biggest blow the NDA government has given to the cause of tribals is through the CAMPA (Compensatory Afforestation Fund Management and Planning Authority), which has totally diluted the forest rights Act. CAMPA is totally violative of the constitution.

Besides, the anti-beef campaign is totally anti-tribal. Tribals depend on beef as their source of protein, as entire northeast and Scheduled Tribe areas eat beef. This Modi government is not only anti-tribal but hostile to tribals.

How you see the 2019 Lok Sabha polls playing out? The BJP is claiming that the TINA (There Is No Alternative) factor, opposition disarray and Rahul Gandhi being no match for the prime minister will bring Modi back to power.

I have spent four decades contesting parliamentary polls after I got elected for the first time in 1977. I think I have noticed that for any government in power – at the Centre or in states and irrespective of the length of the government – when elections come, people take a call and decide whether this government should continue or should be thrown out.

Once people decide that you are out, it means you are out. Pundits living in cities raise issues like TINA. Take the case of Delhi – Arvind Kejriwal came from nowhere and is ruling today.

In my home state of Andhra Pradesh, till 1983 there was unstinted Congress rule. Then within months before N.T. Rama Rao emerged from the green room of a studio and went to the cabinet room to become the chief minister.

In West Bengal, no one was able to dislodge the Left Front. Mamata Banerjee fought. Congress could not get its act together. Now the Left has become non-existent in the state.

The TINA factor does not impress me. The fact is that the only party which has national outreach and is in nook and corner of the country is the Congress. It may be having just 44 MPs and no MLAs in many states, but Congressmen are everywhere.

One should not forget that in the eight Lok Sabha, BJP had only two MPs – C. Janga Reddy from Andhra Pradesh courtesy N.T. Rama Rao and A.K. Patel from Gujarat.

If a sectoral outfit like the BJP could have gained over time in such large numbers, Congress is already there, can emerge anytime.

In 1977, the Congress was wiped out of North India and had only four MPs from the region. But in 1980, in two and a half years, it was back with a two-third majority.

Emergency was wrong, therefore the Congress lost. Even the Congress Working Committee accepted that. People who are talking about the Emergency and whipping up emotions are insulting mandates given by the people in 1980, 1984, 1991, 2004 and 2009.

But the argument of the ruling side is that Modi is a strong leader and no one, including Rahul Gandhi, can match him.

Ours is a parliamentary system. Attempts to project Modi as the only leader, in a parliamentary democracy, are against the spirit of democratic federalism. This is not a presidential system.

It was not Pandit Nehru against somebody else. In true federal spirit, stalwarts from the states gave succour and strength to the Centre. Right now also, the Congress will derive strength from various states.

I am totally against pitching an individual against an individual and thereby trying to convert parliamentary democracy into a presidential form of the system.

Ideas about holding simultaneous elections is also an extension of the thought.

While he talks of freedom of the press, his government practices an undeclared form of press censorship as he has sought to control both print and electronic media through unethical means by misusing government agencies. A severe blow has been dealt by blanking out the recorded speech of the Tripura chief minister.

Any leader either of the Centre or the state, who is product of the media, electronic or print, has also fallen like a rock from a cliff to the ocean when he has been unable to live up to [public] expectations.

Parliamentary democracy is not about the projection of a prime ministerial candidate. Elected representatives will elect a leader. Was Narasimha Rao projected the leader in 1991? Was Manmohan Singh projected in 2004? Yet they became prime ministers and did better than many other prime ministers.

But what about Rahul Gandhi?

Elected representatives will elect a leader. Democracy cannot work with demagoguery. Rahul is certainly not a demagogue. False promises and eloquent speeches alone do not make a good prime minister.

Rahul today is only the vice president of the party. Why are leaders of the NDA including cabinet ministers so worked up when Rahul goes on a holiday? Has he gone outside more than the prime minister?

Have people voted this government in to govern this country or to chase Rahul Gandhi’s shadow? According to them, he is no match for Modi. Then why are they so perturbed?

Can the Congress give up the claim to lead the next government in order to bring about opposition unity as the paramount aim to defeat the BJP?

In a democracy, numbers do matter. It is the art of the possible. Numbers are important for the democratic process. Who will become the prime minister will depend upon the results.

Has Nitish Kumar’s volte face had a demoralising effect on the opposition?

No. Every politician suffers due to mistakes he or she makes. Even Indira Gandhi had to suffer due to the Emergency.