The Ominous Possibilities of the Outcome of the Farmers' Protests

The Modi government has serious legitimacy crisis and could, as a result, attempt to hold on to power through repressive means and adopt an openly aggressive approach.

We have had many protests through the six-year period of Narendra Modi’s diabolical rule, including those by students, anti-CAA protesters, and Dalits among others. However, in each of these protests, the current regime attempted to launch an aggressive counter-narrative, equating students with anti-nationals, anti-CAA protestors with jihadis and Dalits in Bhima Koregaon with Maoists.

Whether these narratives succeeded in convincing the citizenry is a difficult proposition to examine but what the counter-narrative did succeed is in planting doubt and anxiety and in arresting the moral legitimacy of these protestors’ claims of representing other sections beyond their immediate interests.

It is for the first time that the tables have turned against the Modi regime with the farmers’ protest. The current regime did try the same old trick – of branding them as ‘Khalistanis’ – but that had little purchase when compared to the calm and poised demands of the farmers that were reflected not only in their immediate interests but the model of ‘development’ itself being pursued unapologetically in favour of the corporate sector. The anxieties today are more about the intent of the regime than about the demands of the farmers.

The method of protest employed by the farmers, including their concern for political prisoners, students and the growing costs of education, and the general atmosphere of clamping down added to their moral veracity. The farmers’ protest looks less political and more about subsistence. It emerges from the basic need for food that concerns all sections of the society and it looks unlikely that the farmers would have any other crypto motives other than what they are demanding, given the sustained agrarian crisis in India for the last many decades.

Farmers had more moral valency given their rural roots compared to high tech machinations. It is a combination of such factors that threaten to expose the real content of the Modi regime’s governance. The farmers’ slogan, “Sarkaar ki asli majboori – Adani, Ambani, jamakhori'” appeared to be authentic, after the Congress’s slogan of ‘suit boot ki sarkar‘ came close to capturing the popular imagination. It is with this moral power that farmers could launch a direct critique, bordering abusive disregard of Modi’s leadership. They burnt his effigy, declared him guilty and refused to buy his arguments of favouring the farmers by disregarding what they had to say.

This narrative could be the key to understanding many other narratives and slogans the current regime has put in place. One could argue that now the Modi regime has a serious legitimacy crisis and even the opposition parties have mustered the courage to join the protest, get on to the streets and declare a joint struggle against its rule. Instead of parties giving courage to the citizens, it is the citizen-farmers who are lending credibility to the opposition parties. 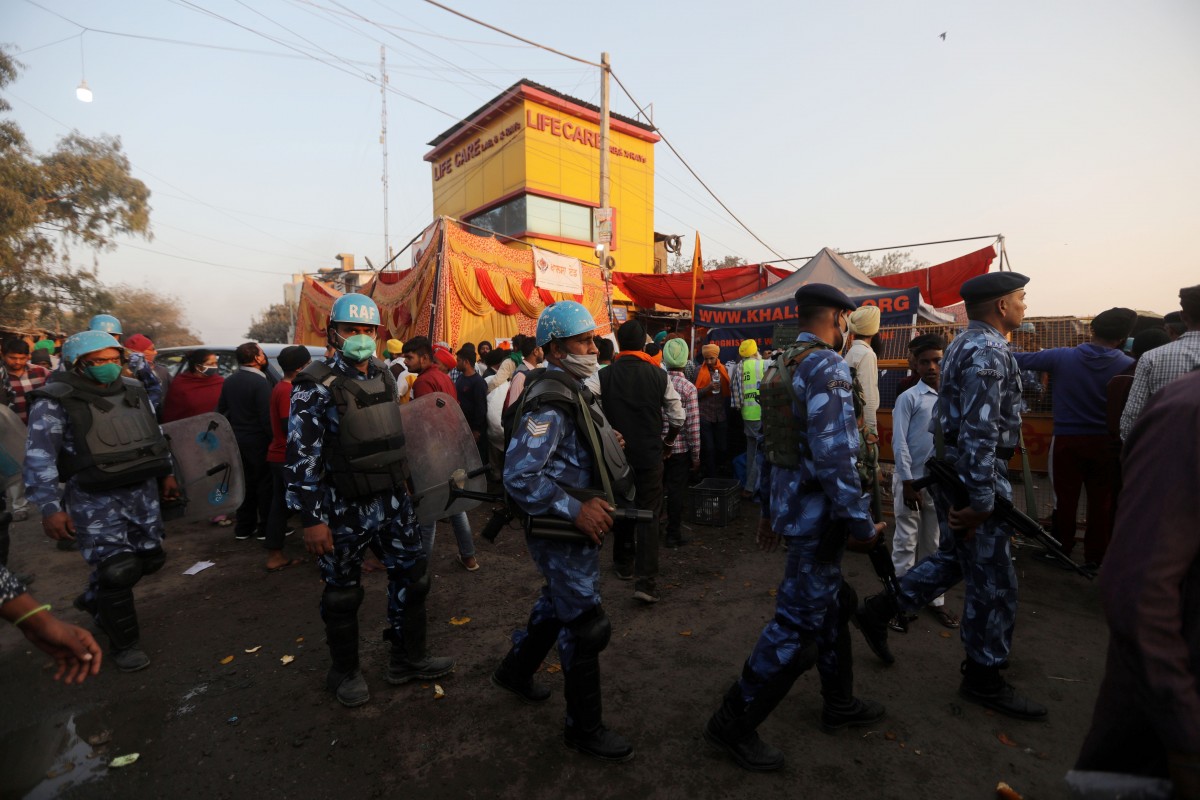 Members of the Rapid Action Force (RAF) walk at the site of the protest during a nationwide strike against the newly passed farm bills at Singhu border near Delhi, India, December 8, 2020. Photo: Reuters/Anushree Fadnavis

While the loss of legitimacy opens up space for the opposition and new narratives required in a democracy, given the majoritarian character of the current regime, it could also pave the way for the ominous possibility of a model of governance divested of claims of legitimacy, consent and popularity. The current regime could now devise a model of a state divested from society and instead of attempting to implement its agenda, as it was attempting, bottom-up by trying to include various sections, move towards an approach that can more openly and aggressively disregard the question of maintaining legitimacy.

The nature of the crisis of the current regime is much deeper and is vastly different even from the fascist regime of the Nazis. The Nazis under Hitler’s leadership enjoyed near-complete popularity and consent of the Germans. Germans were convinced that Hitler was the correct response to the historical injury they had suffered after the First World War. Hitler may have been defeated in war but was not politically defeated until the very end. This was partly because the Nazis themselves had the goal of avenging the insult and not merely one of capturing power.

One has to concede with some amount of trepidation that the Nazi’s were ‘authentic’ with their agenda and enjoyed popular support. In contrast, the current regime in India has the ambition of gaining near-complete control, remaining in power for long but they have neither the popularity nor the authenticity of the Nazi regime. The current regime is increasingly turning on more and more sections of the society and is continuing to hold on to the support of a tiny minority of zealots who genuinely feel a sense of historical injury and suffer from a deeply nihilistic view of life.

Beyond that immediate circle, Modi does not enjoy unquestioned popularity, which has been steadily declining and reached a crescendo with the farmers’ protest. When moral consent declines, the only way a regime can hold on to power is through repressive technologies of the state that has little regard for popular consent and moral legitimacy. This clearly is an ominous possibility or outcome of the farmers’ protest.

The legitimacy gained through reading down Article 370 and the movement to build a temple has clearly been exaggerated and the common sense of citizenry underestimated. It is unlikely, given the proclivities of a majoritarian ruler like Modi, to recalibrate the situation other than continuing to forcefully claim popularity and continue to undermine the legitimacy of those protesting. At the heart of this is the mode of governance through exception that is seen as a legitimate way of governing as and through a majoritarian lens.

A majoritarian mode necessarily requires this extra-institutional form of governance. When it enjoys a degree of consent it looks legitimate, but when it begins to lose the consent there is no way the majoritarian ruler can withdraw or step back because that will only further delegitimise him.

Majoritarianism has come a full circle from cornering others into moral delegitimisation through trumped-up claims and narratives to itself getting fixed into a similar situation. From calculated chaos and targeted violence, it could become more rampant and random. But this remains one of the possibilities that will have to be countered through mobilisations of the kind the farmers have taught us.