A Manifesto for Reclaiming the Spirit of Federalism

State leaders must be prepared to fight it out in the courts and ballot boxes, and most importantly, must dismount from Twitter and get back to grassroots politics.

One fault our Prime Minister cannot be accused of is that of keeping his word or of delivering on his promises – whether it is the resolve to respect the constitution, carry all sections of the people with him, provide jobs, double farmers’ incomes or improve the lives of Kashmiris. This “Do Not Do” list is too long to be pasted on your fridge door so we’ll skip the rest of it, except one item: Federalism.

You will no doubt recollect that, upon assuming office in 2014, one of Modi’s first pledges was to abide by the spirit and substance of ‘cooperative federalism‘ with the states. True to form, however, he has done everything to demolish it and replace it with ‘adversarial federalism’, a  centralised unilateralism that does not allow for any discourse, consultation, consensus building or difference of opinion.

India is a Union of states where the states – other than the units of British India – chose to join the Union at the time of independence: that is why the constitution gives them a large share of political and legislative autonomy, with separate central, state and concurrent lists of subjects. This does not, however, suit the hegemonic ideology of the BJP-RSS combine and its authoritarian streak. Which is why, from day one, the BJP has exerted its all to dislodge opposition state governments, sometimes by hook but mostly by crook.

Its early clarion call for a “Congress-mukt Bharat” was not just a thrasonical statement of intent, but also a strategy in this direction, where the Congress was simply a metaphor for all opposition parties. And it certainly succeeded in the first four years of its reign, winning state after state or arm-twisting the winners to join its flock: by 2018 its writ ran in 21 states and 72% of the country’s geographical area.

Even then, however, its gluttony for even more power did not persuade it to honour the promise of cooperative federalism and to work with the states. Crucial legislations were passed or amended without any consultation: Triple Talaq; amendments to the NIA Act, Unlawful Activities Prevention Act, RTI Act, Land Acquisition Act; changes to the Companies Act and Representation of People Act to introduce the Electoral Bonds; the Kashmir Reorganisation Act and changes to Article 370; the Citizenship Amendment Act.

It used its intimidating numbers to ram a flawed GST through a GST Council. Demonetisation took the states as much by surprise as it perhaps did Arun Jaitley, the then finance minister. Brute majority and partisan speakers were employed to gag any meaningful discussions in parliament, the hallowed convention of referring important Bills to select committees almost totally discarded.

State elections became near military operations, nothing was left to chance or the voter, regulatory agencies liberally deployed to remind candidates and MLAs on which side their bread was buttered, and the difference between buttered toast and bread and water. Central schemes – like Ayushman Bharat, crop insurance, Swachh Bharat, Namami Ganga, minimum support prices, income for farmers – were rammed through without conferring with the states.

It mattered little that some states had their own schemes – sometimes better ones – for the intention was to promote only the BJP brand and drive all others out of the market, not unlike what Ambani was permitted to do for the telecom sector. It was made clear that the Union government did not trust the state governments and so the convention of informing the state government of impending raids by CBI or ED was jettisoned and central forces, not local police, were deployed to escort the central teams, at times leading to a near confrontation between the two. 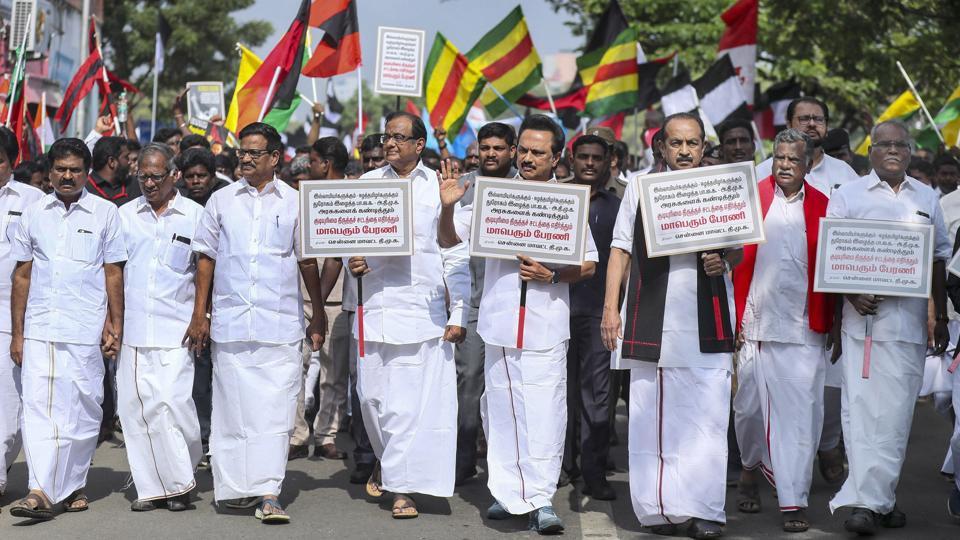 The NIA was allowed to trample all over the policing and law and order which was the prerogative of the states.The Finance Commission is perhaps the most important instrument for determining the division of tax revenues between the Union and the states, and thus its terms of reference are of vital concern for the states. And yet, the TORs of the current 15th FC have been changed without any consultation with the states: two in particular – relating to the base population criteria and the setting up of a separate Security Fund – have led to subdued protests, even by some of the BJP’s allies. The great leader, however, cannot be bothered.

Till about a month ago it appeared that federalism was all but dead, but Jharkhand and the CAA-NRC/NPR protests have miraculously given it a new lease of life. The BJP is now on the backfoot, having lost Rajasthan, MP, Chattisgarh, Maharashtra, Jharkhand and barely scraping through in Haryana. It has lost its oldest allies in the TDP and Shiv Sena. It now rules, along with its allies, in only 16 states and over 39% of India’s territory, a big come down since 2018.

Led by the feisty Mamata Banerjee, state after state is rejecting NRC, including a few which were a part of the NDA or were allies of the BJP who had voted for the CAA in parliament. At last count 11 states had declared that they would not allow the NRC to be implemented in their state. A couple of fence-sitters – AAP in Delhi, TRS in Telangana – are also likely to jump onto this bandwagon very soon. The Modi government is characteristically unmoved and unrelenting as ever, maintaining that since citizenship is on the union list the states are constitutionally bound to implement the NRC.

That is certainly true, in a narrow technical and legalistic sense. But legality and legitimacy are two different things, and in a democracy, legitimacy is just as important. Any central programme has to be implemented by the states, and if a large number of them are opposed to it they can stall them till the cows come home to Adityanath’s gaushalas.

Modi will soon discover that either he renounces the NRC altogether or he enters into a dialogue with the states. In both cases, the spirit of federalism would have won. If he does neither and continues to disassemble or engage in repression, he will lose more allies and soon discover that he is unable to govern: a party may have 400 seats in parliament but if it does not take the states along, it will be a lame duck, such is the beauty of the federal structure our constitution has given us.

This is an encouraging sign that the spirit of federalism, which had been smothered these last few years, is reviving and that the states are coming back into their own. The hegemonic BJP will perhaps now realise that their ruthless attempts to paint this vast and disparate country with one colour, one culture, one religion and one identity cannot succeed; that the states are in fact sub-nations of a national whole and must be respected, that India is a country of a thousand identities and cannot be subsumed into one superimposed majoritarian model.

The Pied Piper’s music is becoming increasingly raucous and out of tune with a country which wants to march to a different tune. Notwithstanding his overwhelming majority in parliament, Modi will soon realise that he cannot function without the federalism he had promised and then mocked and defenestrated.

But there is a warning here for the states too – a predator is most dangerous when it is cornered. As more and more states disavow the BJP – I have no doubt that both Delhi and Bengal are lost to the BJP, and that the political weathervane in Bihar will soon point in a different direction – they cannot afford to be complacent. They need to take control of the national narrative and make the Modi-Shah duo react, rather than the other way around.

For instance, leaders should be categorical and specific about rejecting the CAA and NRC – mere statements by CMs are not good enough, they should adopt resolutions to this effect in their assemblies (as Kerala has done) to give them a legislative imprimatur. The same needs to be done for the NPR too for it is nothing but the NCR by another name and another door.

State leaders need to be more aggressive about the GST, the Finance Commission recommendations, central projects which displace people and damage the environment – like the Bullet train, Aarey, the mining and power projects given to Adani and Reliance in tribal areas.

They must be prepared to fight it out in the courts, and in the ballot boxes, if the Centre dismisses them. And most important of all, they must dismount from Twitter and get back to grassroots politics. In the “new” India where the internet is either shut down most of the time or is ruled by the trolls of BJP’s IT Cell, there can be no substitute for street-by-street, house-by-house engagement. Mamata Banerjee has blazed a trail in Bengal which other states must follow. Are Rahul Gandhi and his chief ministers, Akhilesh Yadav, Mayawati, Tejeshwi Yadav, Biju Patnaik, Arvind Kejriwal listening?