The Modi Cult Seems All Pervasive, But For How Long?

Never has the personal image of a politician been built up like this.

There are tens of millions of Indians who now have in their possession, two, if not three certificates showing that they have been vaccinated against COVID-19. Each one of those certificates has the image of Prime Minister Narendra Modi. To all of us, the message is clear – we are safe because of him, his munificence, his blessings.

In the last few days, many images of the portly Hindu god Ganesh have been doing the rounds, to mark the annual festival of Ganesh Chaturthi. Many of these images show Modi too.

He is in the newspapers, on television, and on billboards.

One can get sarees with his face on them, and his photo adorns several book covers.

Bridges, roads and warships – he inaugurates everything. Just in the last week, he has launched projects in Bhuj, Kerala and Mangaluru. He also makes all the statements, while the ministers from those departments keep their heads low and keep quiet. If they do speak, they pay ritualistic obeisance to his many qualities. No one else is allowed to get in the limelight. Kim Jong Un could take a few lessons from him.

So it should come as no surprise to read that finance minister Nirmala Sitharaman admonished the collector of a district in Telangana for not putting up a banner of Narendra Modi at a ration shop. It was the central government which was bearing the bulk of the subsidy of rice, she said, presumably making it natural that Modi should be credited for this ‘achievement’. A screengrab from a video tweeted by the TRS party, in response to finance minister Nirmala Sitharaman’s comment on the lack of Modi posters outside a ration shop in Telangana.

That this money came from the pockets of tax payers was too esoteric a thought for her. In her mind, this was another example of the prime minister’s large heartedness.

Also read: Sitharaman’s Remarks Tell Us All We Need to Know About the Govt’s Idea of ‘Welfare’

The deification of Narendra Modi is complete. Not only is he omnipresent, omnipotent but also omniscient – there is nothing about you or your life he does not know – the widespread use of Aadhaar makes this sure. He is the avuncular figure – gives homilies to students about exams – the wise elder, the master strategist, the political campaigner and the world statesman conferring seriously with other leaders. He has been elevated from being a mere politician to an übermensch, embodying not just strength but also wisdom.

Modi is now a confirmed member of the vast pantheon of deities that India – Hinduism – is known for. Temples are built for him, though to his credit, when one came up in Gujarat, he expressed his displeasure. But how does one stop devotees from erecting them in their homes or in their hearts?

Sitharaman is an enthusiastic devotee too and never fails to bring up his name in her speeches; going after the poor collector was par for the course. The comedians may mock her, and magazines may run profiles about her over-enthusiasm, or the Telangana Rashtra Samithi may make fun of her, but why would she care? She is part of Modi’s cabinet, and she owes that position to the prime minister.

But for the rest of the populace, this saturation coverage is not a matter of choice.

They are assailed by the images, moving and static and the voice of the prime minister from every side, whether they want it or not. It is not as if other prime ministers or chief ministers have not put their faces on billboards or ads. Why, every street corner has a poster showing the mugshot of the local politicians wanting to remind constituents of their existence and then adding the image of the party leader, a subliminal way of displaying their loyalty. 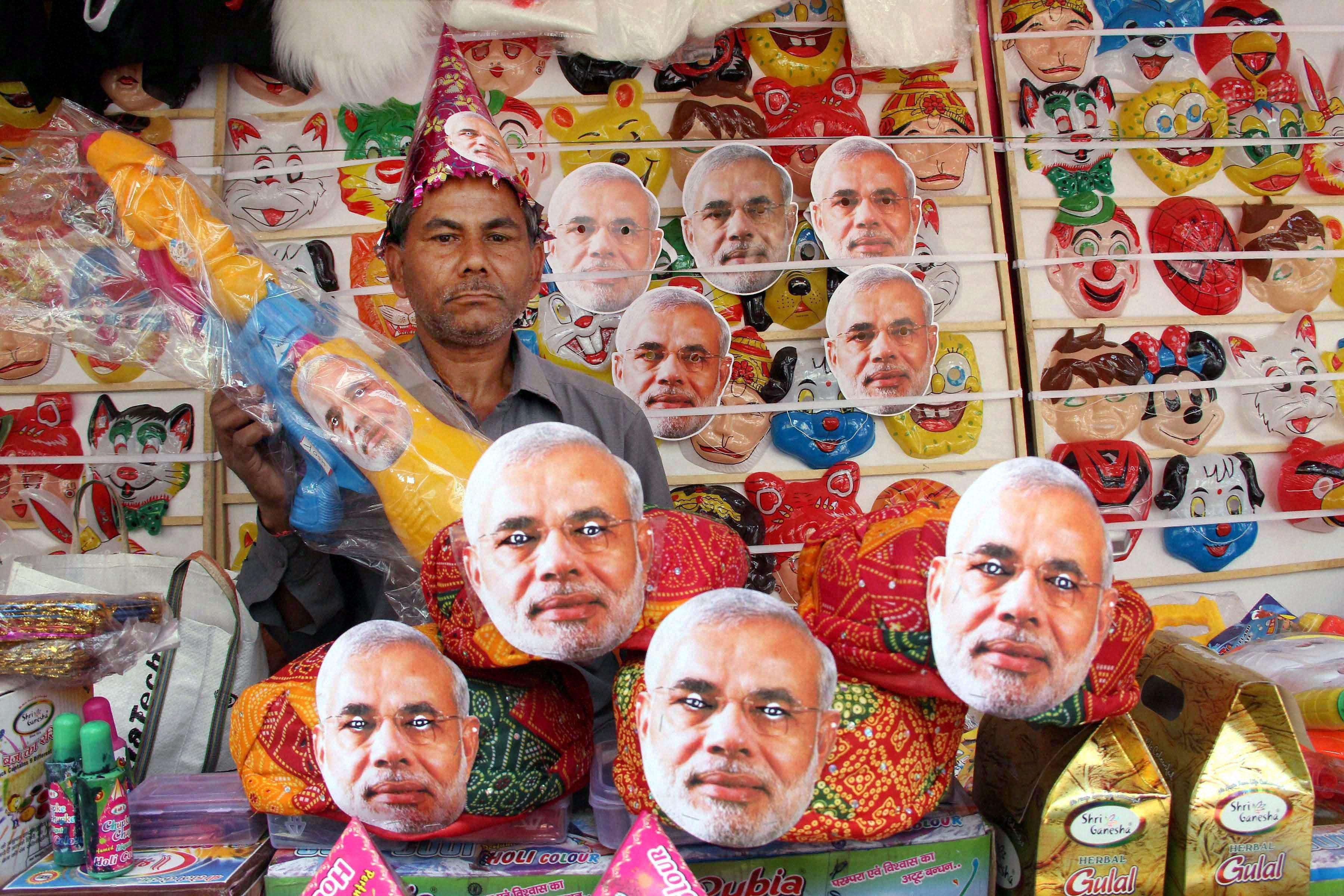 A vendor arranges masks of Prime Minister Narendra Modi at his shop in Ranchi. Credit: PTI/Files

But no one else has done it quite this way – the enormous dimensions of the image building is unprecedented. Modi has often been compared to Indira Gandhi, usually in a superficial way. But even during the height of the Emergency, when her party leaders wanted to keep her pleased and the ‘five point programme’ was pasted on the side of buses, it did not reach the heights – depths? – of what we are seeing today.

Live television and social media have contributed to the sheer scale of the Modi cult, but it cannot have happened without the persona at the centre of it all wanting it, even demanding it and his faithful cultists putting all their energies to sustain it. This is peak megalomania, which demands to be fed all the time, without which it begins to feel insecure; an entire industry exists just to keep it going.

That is what makes him more than just the garden variety authoritarian figure. He has gone far beyond being just another political leader, one more public figure who likes to see his face in the papers – what we are seeing is a cult with millions of followers.

Dictators can at best make people fear them, but not love them. But members of a cult are unwavering in their devotion.

This is blind faith and the faithful see no evil and will not hear any criticism of the object of their infatuation. Whether it is the party spokesperson or the voter, they will all defend him against all criticism, crediting him with triumphs but ring fencing him whenever there is a failure. Nor does the object of their veneration always demand such fanatic loyalty – mostly it just is offered. It is understandable when a party hack does it, after all his job depends on it; how to explain the refusal of the lay supporter to acknowledge the disastrous policy initiatives in handling the economy and so much more? How does one even understand when millions of perfectly sane people start banging thalis during the lockdown because their leader said so?

All of this is at the expense of the institution. The BJP is an old party, and has an even longer history beyond its founding in 1980. The RSS was founded almost a century ago. Narendra Modi may have emerged from that tradition, but is now much bigger than the organisations that groomed him. He does not need either; it is he who gets the votes, not the BJP and while his government  pursues Hindutva policies, it suits him because he understands that it pays in electoral terms. 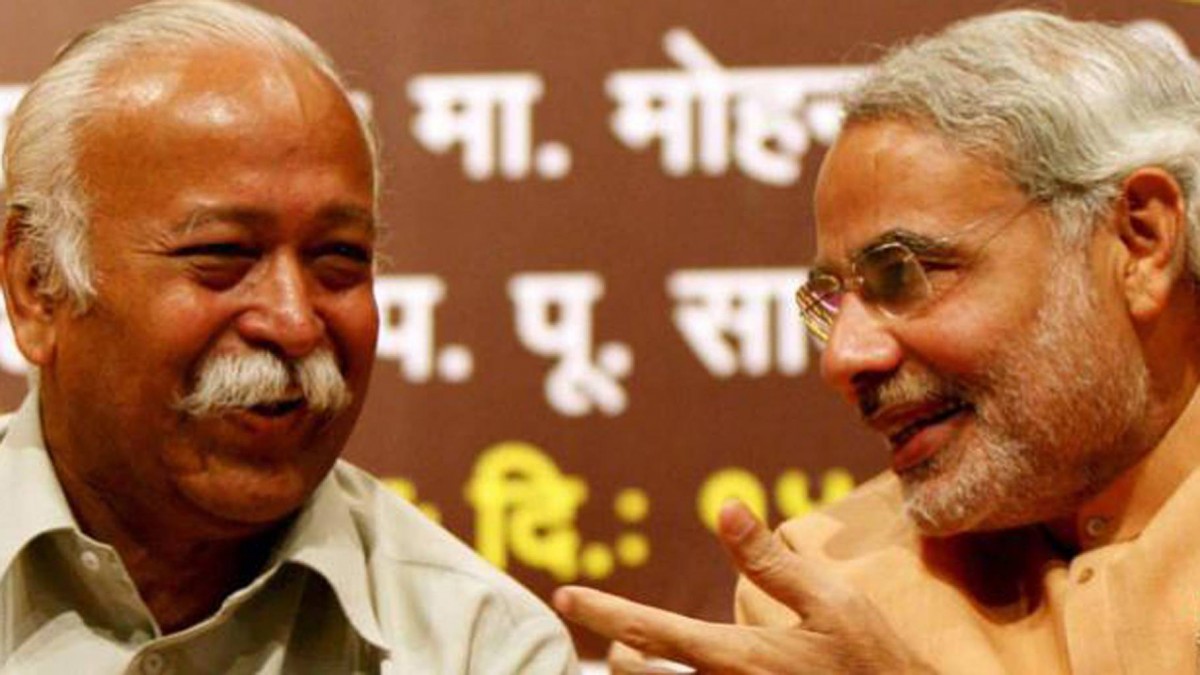 And yet, it must bother him that while he continues to be popular – at least going by the imagery – despite all that has gone wrong, his legacy is getting tarnished. Ideally, he would like to be remembered as the man who set this country on the path to greatness. But India is reeling under him-high unemployment, inflation and general economic drift are the harsh realities that cannot be hidden by all that image building. There is also no getting away from the fact that China occupies Indian territory.

So far, the Modi cult has remained unassailable and there is no reason to think it will change suddenly any time soon, but it is showing signs of being dented. Electorally at least, and that counts a lot, voters in states like West Bengal and earlier Maharashtra have rebuffed the BJP. Nitish Kumar has broken away in Bihar. Most of the south remains unconquered and is not likely to succumb any time soon.

More importantly, reality in all its harshness is hurting even the faithful – bulldozing a Muslim home or humiliating inter-faith couples can only divert for some time. The dangers of maintaining a cult is that the mask of infallibility should never fall and that requires resources. Being in power is critical, without that, harnessing the power and institutions of the state will become impossible. The political headwinds against the BJP are getting stronger. If things change in the next few years, the Modi cult will begin to implode or simply wither away.