Modi's Inept Handling of the Pandemic Has Not Tarnished His Image

Modi’s larger-than-life stature, the demonisation of Muslims, and the BJP’s determined hold over media has created a potent brand of politics. 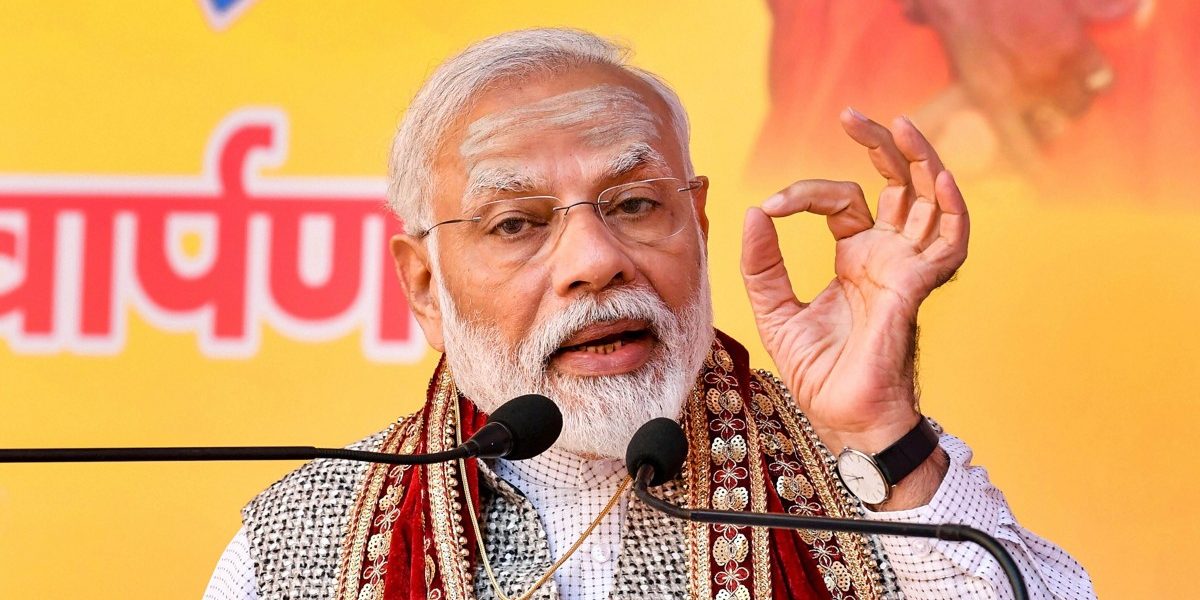 Elections in Bihar are scheduled to be held later this year in November while West Bengal goes to polls in April 2021. Bihar, along with UP, has a large number of workers termed ‘reverse migrants’.

What, therefore, will the political consequences of the COVID-19 pandemic and the lockdown be? Will the hardships faced by the ‘migrants’ diminish Modi’s image? Has the crisis given an opportunity to a moribund opposition to dent his popularity amongst the poor?

Conversations with labourers who have returned to Bihar and UP indicate that Modi’s stature is intact, and he will consolidate his political power in these states. This is in line with a survey conducted by Ipsos, an international marketing agency. According to the survey, 87% of people in India approve of Modi’s handling of the crisis. This also reaffirms the notion that Modi remains BJP’s biggest electoral asset.

However, some workers accused Modi of mismanagement during the lockdown and blamed him for police atrocities and the lack of travel facilities. But given the enormity of the crisis, many have given him the benefit of the doubt.

“It so difficult to manage our own little family these days in such a crisis, we applaud Modij for taking care of the entire country”, said Saurab, who reached his village in UP’s Gonda district from Delhi after the lockdown. He worked in the capital city as an electrician and belongs to the OBC caste of Koeri.

There is also a deeply communal narrative, backed by ‘friendly’ news channels and social media, which has attracted the attention of many “migrants”. “It is the kat..[a derogatory term for Muslims] who are responsible for spreading the virus. I saw it on TV news. What can Modiji do?” said a 20-year-old.

And then there is a sense of being let down by the opposition parties. “I voted for Mayawati during the last elections because she belongs to my caste. I will again vote for her. She has been absent during the lockdown and I feel let down. Muslims and Chinese have got together to spread the virus to defame India”, said Ajay Ram. He returned to his village in Azamgarh from Thane, Maharashtra.

First, Modi is seen as a statesman whose image remains unblemished by the misery that the lockdown has imposed on the poor. His speeches on TV where he peddled a mixture of mythology, nationalism, self-reliance, pride and the sacrifice that people must make for ‘Bharat’ has added to the charisma of his already larger-than-life image. This seems to be an inescapable fact.

Conversations with workers indicate that those who have managed to return to their homes blame everyone except  Modi for the ordeal they underwent during the lockdown. Sanjay Kumar, a Dalit from Paswan community, said, “I voted for the trio of Modi-Nitish-Paswan in the last Lok Sabha elections. But Nitish has let us down badly. Bihar is his territory and the quarantine centre was jail-like. We were treated like Pakistani terrorists. I wish Modiji was ruling Bihar”. Kumar had recently returned to his home in Patna district’s Barh block in Bihar. 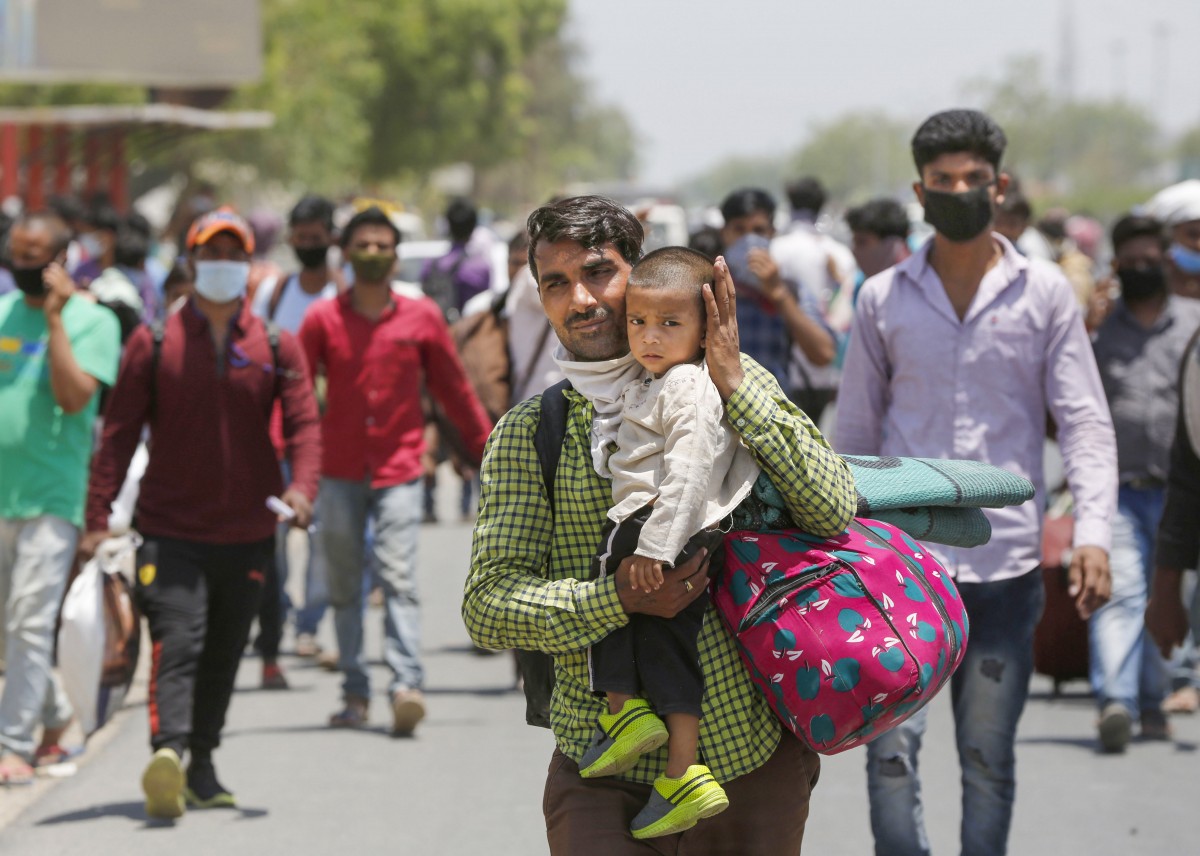 Chitranjan Sharma, who comes from the OBC badhayi (carpenter) community was more candid. He blamed Arvind Kejriwal for all the hardships he had faced on his way to his hometown in Khagaria in Bihar. “Kejriwal had closed the borders. If it was not for Yogi and his boss Modi, we would not have been able to board the train from Ghaziabad in UP. I will always be grateful to Yogi-Modi,” he said.

Twenty-two-year-old Salmaan, who worked in a shoe factory in Delhi, returned to his village in Firozabad, western UP. He and Ajay Ram claim that they didn’t vote for Modi in the last Lok Sabha elections. Without any hesitation, they said that they would vote for SP and BSP respectively again. But they added, “what can Modiji do to protect our jobs? This is such a big international crisis that even the US is collapsing.” They said that this was not the time to criticise Modi.

Second, Muslims and Tablighi Jammat members were not only seen as super-spreaders of the pandemic but also as persons who had been actively conspiring to spread the virus. As is evident from previous plagues that have struck the world, one community – Jews during the Black Death and the gay community during the AIDS pandemic – is singled out as the scapegoat and bears the brunt of the ensuing stigma.

Also read: What the COVID-19 Crisis Means for the BJP and Opposition

This narrative is also compatible with the Hindutva’s agenda that claims Muslims to be anti-national. Saurabh, for example, was assisted by an NGO-led by Muslims activists to reach his home town, Gonda, in UP. Ironically, he said “Sir, it is the Muslims who have spread this disease. They invited people from all over the world to Nizamuddin knowing that there were restrictions”.

Tablighi Jamaat, an unknown entity until the outbreak of the coronavirus, has been vilified to the extent that even Salmaan. a Muslim migrant, who had never heard of it before, apologetically accused it and said, “Why did the Tabligh have to congregate at this time? They should have found another time for the congregation”. He said he is secure because he lives in a predominantly a Muslim settlement.

TV ‘news’ and the role of social media

Third, it has become evident from the conversations that some of the leading TV channels, WhatsApp groups, social media and sections of the vernacular Hindi press have acted as ‘super-spreaders’ in legitimising the demonisation and stigmatisation of Muslims.

Pandey, Saurabh and Ajay Ram said that they saw on TV channels that the Tablighis were spitting on the vegetables. Ajay Ram said that while he was returning to Azamgarh, he and his friends were constantly being reminded via WhatsApp that they should avoid halting in Muslim localities and should not accept any food from them.

Upon being asked what made him conclude that Muslims were to be blamed, Manish Pandey said, “Will all the TV channels, newspapers and WhatsApp message tell lies? Everyone is blaming the Muslims so how could I not believe”.

Nandkumar, in his early thirties, reached his home in Patna from Haryana after spending 15 days at a quarantine centre. He belongs to the Dalit sub-caste Ravidas. He and his family were traumatised after they were boycotted by their upper caste neighbours, fearing that Nandkumar would spread the virus.

Migrant people arrive at Chikkabanavara railway station to board a special train for their native places in Uttar Pradesh, amid ongoing COVID-19 lockdown, in Bengaluru, Friday, May 8, 2020. Photo: PTI/Shailendra Bhojak

Nandkumar said that he did not vote for Modi in the last Lok Sabha elections. However, he too was convinced that the Muslims were liable for the spread of the virus. When asked as to what evidence he had to that effect, he got said, “You sound like an educated man. Read the newspapers and watch the news on TV. And you will get the proof”.

The case of the missing opposition

The three main opposition parties in Bihar and UP – the  Tejashwi Yadav-led RJD, the Samajwadi Party and Mayawati’s Bahujan Samajwadi Party – have gone underground. Mayawati spoke once, but accused the Congress instead of the BJP, for the crisis caused by the lockdown.

Also read: Modi Once Stoked Public Fears About Coronavirus, Now He Doesn’t Know How to Dial Back

The Congress has no political presence in the two states. Priyanka Gandhi’s offer of bus rides to the migrants, seen by some as a clever political move, was a damp squib.

Modi’s larger than life stature, the demonisation of Muslims, and the BJP’s determined hold over media and social media has created a potent brand of politics. It will help the BJP sustain its political dominance in UP and Bihar, and the rest of India.

Even committed voters of the opposition, like Salmaan, Ajay Ram and Nandkumar felt let down by the leadership of their parties. And BJP, with its well-oil propaganda machinery, may soon draw them away. These conversations are a reminder of the hegemonic hold the BJP continues to have.