Sentiment against the prime minister is not particularly high in the state which has seen intense protests against the CAA. 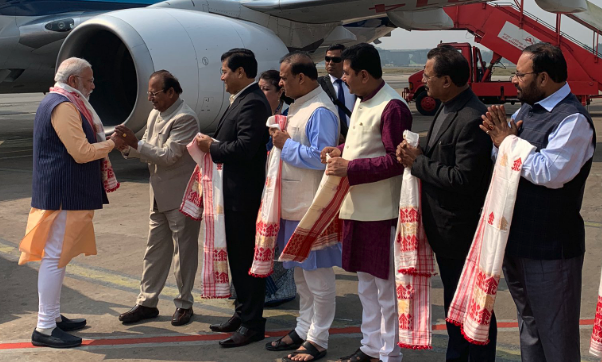 New Delhi: After having aborted his two earlier trips to Assam due to the massive protests against the Citizenship Amendment Act (CAA), Prime Minister Narendra Modi finally set foot on the Bodo Territorial Region (BTR) of the state on February 7, to join a government-funded celebration of the recently signed Bodo Accord.

On my way to Kokrajhar!

Looking forward to being among people there. pic.twitter.com/OYMYIUngE2

The BTR areas have been kept out of the CAA, along with two other autonomous districts that function under the Sixth Schedule of the Constitution.

Since 1993, three accords have been signed by the central government with Bodo outfits to scuttle the demand for a separate state and bring peace in the sensitive western Assam region that borders Bhutan.

Also read: Modi Aims to Ride Bodo Accord Wave on 3rd Attempt to Visit Assam Since Passing of CAA

The particular social media strategy employed by public representatives and government offices’ Twitter handles – starting from the prime minister himself – nearly 24 hours before the visit itself is clearly an attempt to create a positive buzz around the visit. Protests against the CAA are still raging in the state, especially in the Brahmaputra valley.

On the evening of February 7, in typical coordinated fashion, the Twitter outreach programme of the prime minister’s scheduled visit unrolled.

BJP’s man in the North East, Himanta Biswa Sarma, who has been overseeing the trip and regularly using Twitter to create positive PR around the visit, was first to take to the social media platform and talk of a “rare exuberance” that has allegedly gripped Assam in anticipation.

On this momentous day when PM Sri @narendramodi is with us to bless us for the #BodoPeaceAccord I invite you all to join us in the celebrations as well.

Join me Live from #Kokrajhar on my FB at 12 noon today.https://t.co/B3FVIz0n63#AssamWelcomesModi pic.twitter.com/82ybHq8RhW

He posted multiple photos and videos of earthen lamps bring lit at the venue on February 7 night to welcome Modi the next day.

There is a rare exuberance in the air and a sense of overwhelming gratitude, as Kokrajhar awaits arrival of PM Sri @narendramodi hours from now, to join the #BodoPeaceAccord celebrations on Feb 7. I again reviewed preparations for this historic program. @PMOIndia pic.twitter.com/eCG69Ut1yN

The Ministry of Home Affairs spokesperson Vasudha Gupta also took to Twitter with a set of photos showing the earthen lamps. From a day before, her official handle has been publicising on Twitter news reports on preparations for the trip run by the public-funded Doordarshan National, DD News Guwahati and All India Radio Guwahati.

The Bodo Accord has been signed by the MHA on behalf of the central government. Union home minister and BJP’s former chief Amit Shah is to accompany Modi on his visit.

The MHA spokesperson’s tweet was picked by the official handle of the Prime Minister’s Office to attest to the “immense enthusiasm in Kokrajhar” over Modi’s visit.

Immense enthusiasm in Kokrajhar in the run-up to PM @narendramodi‘s visit there on 7th February 2020. https://t.co/saDHNPD0k2

During the anti CAA protests, effigies of Modi have been burnt in various parts of the state. Slogans against the prime minister have been raised in rallies, meetings and marches. Through a tweet, Sarma also tried to use the opportunity to point to “his (Modi’s) extraordinary dynamism, strong personality, and clear intentions for his country…”

This tweet was acknowledged with “gratitude” by Narendra Modi’s personal handle.

Gratitude to my sisters and brothers of Kokrajhar. https://t.co/LqosTe51ti

In tandem was Department of North East Region (DoNER) minister Jitendra Singh, who also used the same photos of earthen lamps at the venue. Singh’s tweet was retweeted by the Narendra Modi handle with, a “thank you Kokrajhar” message.

Thank you Kokrajhar! I am eagerly awaiting tomorrow’s programme. https://t.co/8oxrP0v969

As if in sequence, an Aaj Tak reporter, who reached the venue from Kolkata on February 7 to cover the rally a day later, did a ‘live’ bit by the earthen lamps to speak to people present at the site. Earlier in the day, the reporter’s interview of Sarma at the venue was already tweeted by the minister. Yet another video from her coverage was retweeted by state chief minister Sarbananda Sonowal.

Interestingly, the night ‘live’ report of Aaj Tak was at once picked up by the Prime Minister’s personal handle. Modi perhaps saw in the report an opportunity to sweep aside the unrest the CAA has caused amongst a large sections of people, especially youth, in Assam.

A new dawn, fresh vigour and renewed hope in Assam!

The Bodo Accord will help the youth fulfill their aspirations. https://t.co/GarBiaT7Pm

Aside from using the Aaj Tak feeds to highlight the visit, multiple clips of Doordarshan and All India Radio under the Ministry of Information and Broadcasting have also been used on Twitter.

A short video readied by Doordarshan bestows credit on Modi not only for the Bodo Accord but also for the recent agreement to settle Brus in Tripura instead of their repatriation to Mizoram. Jitendra Singh tweeted it barely a few hours before Modi was to land in Assam. Since his landing, however, all the abovementioned handles have focused on quick despatched of his airport welcome, the crowd at the celebration venue in Kokrajhar and his journey there.