Modi 2.0's Big 'Achievement' in Its First 100 Days is to Undermine the Indian Union

The constitution describes India as a “Union of States”, meaning the “states” pre-existed the Union and are the federating parties that created it. By abolishing one state, J&K, Modi has threatened the very basis of the Union.

So great was the Kashmiris’ trust in India’s secularism that their faith in it was not shaken even by 20 years of Indian mistrust, and military rule. Photo: Reuters/Danish Ismail

Had Chandrayaan 2’s moon lander not failed, it would have been our media-hungry prime minister and not Prakash Javadekar who would have addressed the press conference in Delhi on Sunday on the first 100 days of his second term in office. Javadekar tried to make the best of a miserable deal: he steered clear of the economy’s collapse and near three-fold increase in youth unemployment in the past seven years, and took credit for amending the Unlawful Activities Prevention Act that has turned India into a police state.

But his primary selling point for Modi’s government was its “full integration of Kashmir into India” by simply abolishing Article 370, and turning Jammu and Kashmir and Ladakh into union territories under the direct rule by the Centre – something that no other government had had the “courage” to do so far.

Neither Prime Minister Modi or Union home minister Amit Shah have bothered to ask themselves whether their predecessors’ restraint was cowardice or sagacity. This is because neither seem to be aware of the chasm that separates courage from foolhardiness. Courage presupposes foresight: a careful weighing of risks and benefits before adopting a course of action. Foolhardiness requires only the ‘courage’ to make a blind leap into the dark, hoping one will land on one’s feet.

On August 5, Modi and Shah made that leap. Today, it is apparent to those who have not been swept away by the prime minister’s self-congratulatory oratory, that he and Amit Shah have landed on the first step that leads to the disintegration of the Indian Union. 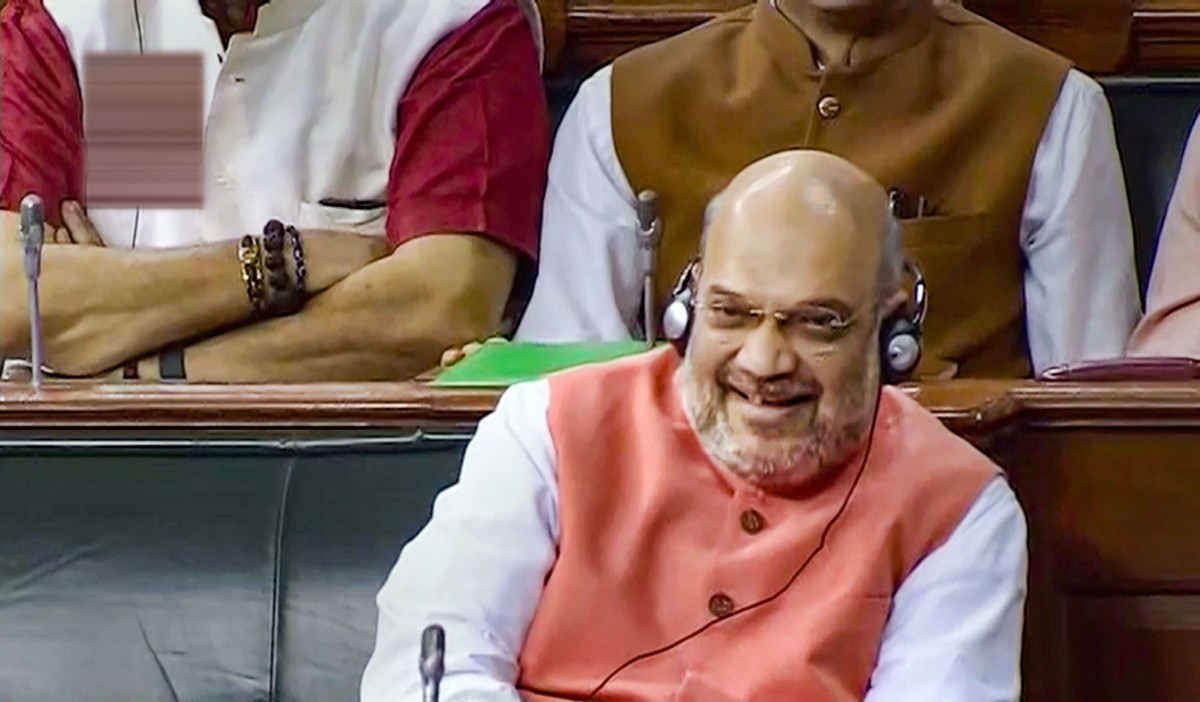 Home minister Amit Shah in the Lok Sabha during the debate on Article 370 and the reorganisation of J&K. Photo: PTI

For by dissolving a federating state of the Indian Union and bringing it under direct central rule for howsoever brief a period of time, Modi has set a precedent that, if not overruled, can be used by a future government to convert any part, or even all of the Union, into a unitary state. This will not only destroy the most basic feature of the constitution – the federal structure of the Indian Union – but also negate the political rationale that underlies it.

The reality that not only Modi but many constitutional theorists are only dimly aware of is that Indian federalism is not based upon administrative convenience or date of acquisition of a particular territory, as is the federalism of the USA, Canada and Australia. We already had that form of federalism under the Government of India Act of 1935 and lost no time in changing it drastically.

Also read | Kashmir Under Siege: One Month of Silence

Today’s India is a federation of far older ethno-nations, several of which have had a distinct identity for more than two millennia. These have had distinct cultural and political identities long before the Indian Union was born. This fact is explicitly acknowledged by the constitution which describes India as a “Union of States”, a clear admission that the “states” in some manner, pre-existed the union and are the federating parties that created it.

The primacy of ethnicity was asserted at the cost of his life by Potti Sriramulu, the creator of Andhra Pradesh, in 1953 and conceded by Jawaharlal Nehru in the same year by creating the States Reorganisation Commission, with a mandate to redraw the boundaries of the existing provinces and create new states on the basis of language. So vigorously has ethnicity been defended that this process took another three decades to complete, with the separation of Gujarat from Maharashtra, the re-creation of Punjabi Suba as the homeland the Sikhs lost with Partition and the states of the northeast and Goa, before a stable federation finally emerged.

Indian federalism is therefore a living, breathing, entity. Its central purpose is to protect the ethnic identities of its peoples while expanding the field of their opportunities. This has been the glue that has successfully bound the most diverse region in the world into a single, modern nation-state.

Article 370 was one of the most important safeguards to India’s ethnic diversity because it safeguarded the distinct, syncretic culture of a Muslim majority state that opted for India – both its maharaja and its people – in order to protect that identity, Kashmiriyat. It is not surprising, therefore, that Article 371, which gives similar protection to ten other Indian states, is modelled on Article 370.

Thus, as elements in Nagaland and Mizoram have already pointed out, if the Supreme Court allows the president to dissolve Kashmir’s statehood, it can open the gates for some future government to dissolve theirs as well. What is more, this unease is bound to infect other, larger states as well, especially Andhra Pradesh, Tamil Nadu, Punjab, Bengal and Assam.

So great was the Kashmiris’ trust in India’s secularism that their faith in it was not shaken even by 20 years of Indian mistrust, and military rule. As a result, in 2009 a survey of public opinion in the Kashmir Valley, conducted by the London-based Royal Institute for International Affairs, found that even in the four worst-affected districts of the Valley, only 2.5-7.5% of Kashmiris said they would like to belong to Pakistan. By definition, this meant that the vast majority who wanted “azadi” did not want it at the cost of cutting their economic, educational and medical ties with India.

That was the near-peace that Modi inherited in 2014. But within three months of his swearing-in, he had destroyed that half-built edifice by publicly humiliating the Hurriyat, terminating the tacit tripartite dialogue of which it had been a part since 2004, and raining “10-for-1” fire across the Line of Control in reply to sporadic ceasefire violations by Pakistani soldiers.

The most damaging of all has been the change in the television media from sympathetic neutrality to a perfervid hyper-nationalism. Suddenly there were no more azadi advocates in Kashmir, no more militants, no more stone-throwers, no more disaffected youth needing to be persuaded back into the mainstream. All were simply terrorists. These views and comments, aired relentlessly along with news of cow vigilantism, the incidents of Muslims being lynched in different parts of India, and acquittal after acquittal in the cases of bomb blasts in mosques, madrassas and trains designed expressly to kill Muslims, had completed the alienation of all but a handful. The scrapping of Article 370 is, for them, the last straw.

Like other would-be conquerors, Modi does not know the meaning of the word ‘retreat’. So his response to the return of militancy has been to use more and more force. When this too failed, he decided to eliminate the problem altogether by eliminating Kashmir. But that too is not happening. One month has passed since the government dissolved the state into two Union territories, but the Kashmir Valley is still under a siege that the world has not seen since medieval times. Worse, Amit Shah announced that it will continue for another 20-25 days.

The future of Kashmir, and therefore of India-Pakistan relations, is so dark that it does not bear thinking about. But the main threat that Modi’s actions pose to India does not lie outside its borders. They lie inside it, because if not stopped by the Supreme Court, what he has started could very easily presage the disintegration of the Indian Union.