Modi ji, Why Don't You Speak About the Falling Rupee and Rising Petrol Price?

Is the prime minister disturbed by the speeches he made in 2013? Or is he busy preparing even better speeches for 2019?

Prime Minister Narendra Modi is hailed as a master orator. In 2013, when he roared against the government of the day, blaming it for the rupee’s falling value, people cried out, “Wah, Modi ji, wah! This is what is called a speech. It’s not just a speech but food for a hungry nation. We want a leader who speaks. What the stomach wants is not its daily ration but bhashan, oration.”

Naturally the desire, or demand, for a leader who speaks must have reached Narendra Modi’s ears too. After that there was no looking back – he did not miss a single opportunity to declaim. When the petrol price soared, Modi ji thundered, and when the rupee plummeted, Modi ji thundered some more – tweet after tweet and retweet, debate after debate.

Then came 2014 and singing eulogies to Prime Minister Narendra Modi became the media’s raison d’etre. Those who desisted from penning paeans found that their writing was stopped altogether. Some anchors lost their jobs, some editors were sidelined. The media was effectively silenced. Enter the lapdog media. The field is absolutely clear in the time of the lapdog media, but strangely enough the prime minister has fallen silent – he is not speaking about the rising petrol price or the rupee sliding down, or about demonetisation. This is the time for him to hold forth even more than he did before. The youth may not have been provided the jobs promised to them but what can definitely be delivered to them are masterly orations.

The mainstream media of ‘Vishwa Guru’ India (leader of the world), has been reduced to a pathetic mime act. It has been weakened, in turn enfeebling the people. When television anchors can be removed, a strike or two of the lathi is enough to ensure that those who think of asking questions are cowed into silence.

This is the India that was wished for, right? Gaze upon it as it unravels before your eyes. Looking back from where we stand in 2018, the year 2013 appears to have been a year when everybody flattered to deceive.

Is the prime minister disturbed by the speeches he made in 2013? Or is he busy preparing even better speeches for 2019? Until then the least he can do is tweet his old speeches, with the following clarification: “What I said then holds true even today. Why keep harping on the same thing? While hearing those speeches, make sure you see me not as I am in 2018 but as I was in 2013. You have to understand, generals do not communicate constantly. They speak only when they have to put down someone, not when they have to reply to a question, be answerable.”

The speeches Modi made then – are they stressing him out? That does happen sometimes. Remember Sri Sri Ravishankar promised a strong currency of Rs 40 to a dollar? Don’t know how he is facing his disciples these days. As for Ramdev, he was going to make petrol available to the youth at Rs 35 a litre. He too is quiet now. His Vishwa Guru India has slumped into silence as well. Look at the duplicity here: those who had been promised petrol at Rs 35 a litre are buying it at Rs 86 and it does not seem to be bothering them at all; not a squeak emanates from them. 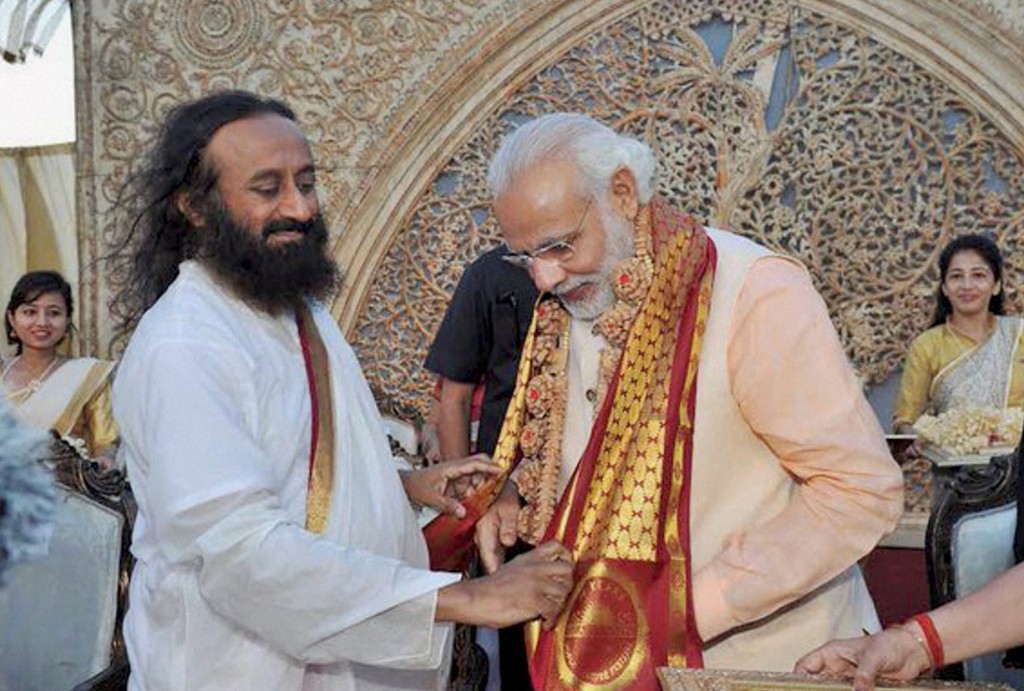 File photo of Prime Minister Narendra Modi being greeted by Art of Living founder Sri Sri Ravishankar during the opening day of the three-day long World Culture Festival on the banks of Yamuna River in New Delhi. Credit: PTI

It is tempting to wonder about the thoughts that flash through the prime minister’s mind. Would they be on these lines: “Hope nobody is asking questions about why the seaplane that descended on the Sabarmati during the 2017 Gujarat election (when I flew from the Sabarmati riverfront to the Ambaji Temple), has not appeared anywhere near the river since”. [At that time the seaplane ride was pitched as the harbinger of a revolution in waterways transport.]

Would such a thought be followed by a sharp nudge and a demand like this: “Just confirm if the anchors who ask questions, have been shown the door. If anybody was missed, ensure s/he is also thrown out. There are crores of unemployed people in this country. I have not been able to provide people employment but I do have the power to make them jobless. The IT cell can come up with some reasons. Then all that is left is to dub them urban Naxals.”

Just about everybody in the government is skulking, searching for some topics to speak about so that the occasion for commenting on the tumbling rupee or the giddily mounting petrol price does not arise. To a large extent the people have also chosen to be silent. Their silence is proof of the fear they harbour within themselves, and that bespeaks a perilous state of affairs – many find it difficult to make an entry in a comment box that their earnings are being blown up at petrol pumps. Can’t they see that petrol prices have crossed the Rs 86 mark and the weakening of the currency has gone beyond Rs 71 to a dollar?

Modi was asked for his response to these very issues in 2013, so why isn’t he being asked the same questions in 2018? Why does he as the prime minister find it difficult to hold forth on questions such as the historic decline of the rupee or the Rafale deal? With regard to the latter, the defence minister started to say something but was told not to speak. Meanwhile, the finance minister is writing a blog. The next thing you know, the Rafale deal might be tossed over to the postal department, with the concerned minister pasting a wealth of postage stamps on it – to send it on.

Fear – that’s what it boils down to, the internalisation of a culture of fear. The process is now complete. Fear has largely driven away questions – in their place is a feeling of dread that the income tax official or the cop will land at your doorstep following which television channels will be agog with news of you being a Naxal. That is why people have fallen silent.

If everybody wanted a leader who speaks so that they could remain voiceless and live in fear, the leader who declaims need not be fearful of anything.  Why is he quiet then? Is he also afraid to speak now? It happens, you know – while you strike fear into others’ hearts, it has a way of coiling inside you as well. He who runs scared is the one who intimidates and, conversely, he who intimidates is the one who runs scared.

What we are seeing, by and large, is a landscape where all questions have been stilled. Television channels are running an unending propagandist spiel of ‘who will confront Modi in 2019’. The salient questions of 2018, which have an impact on people’s lives, have been airbrushed, made to disappear. Why just questions, the people seem to have vanished too, leaving bhakts (devotees) or supporters in their wake, who don’t ask basic questions such as this: how is it that in a country where there no jobs and no increase in incomes, people have the capacity to buy petrol at Rs 86 a litre?

Is it that the people are not being able to come out of the mould of Hindu-Muslim polarisation? Are they afraid to do so, hesitant to voice their discomfort about issues like the falling rupee and soaring petrol price?

A few days ago, Mahesh Vyas, managing director and CEO of Centre for Monitoring Indian Economy Pvt Ltd. (CMIE) spilled the beans in the Business Standard once again: while the GDP rose to 8.2 % in the first quarter of this year – triggering jubilation in government circles – there was a drop of 1% in employment during the same period. Between July 2017 and July 2018, there has been a decline of 1.4% in the numbers of the employed. According to Vyas, the second quarter is also seeing a downward trend, with August 2018 witnessing a fall of 1.2% in employment.

Even so, questions pertaining to employment are few and far between in the mainstream. Youngsters across the country are protesting under various banners but their concerns are not being addressed. As long as they were reciting the polarising Hindu-Muslim chant, they were dear to the dispensation – they were part of ‘us’. The moment they started demanding jobs, they became the other. Almost as if the politics of the day is aimed at moulding them into rioters rather than giving them jobs.

To add to all this is the sophistry that abounds. The vice chairperson of NITI Aayog, Rajiv Kumar, has loftily stated that they are prepared for another round of demonetisation if necessary. The level of superciliousness with which the destruction of the economy is being talked about has rarely been seen before. Prime Minister Narendra Modi happens to be the chairperson of NITI Aayog. Does he subscribe to the same view?

Elsewhere, Jayant Sinha, minister of state for civil aviation, has proclaimed that air fares have become cheaper than travel by auto-rickshaw. Is that so?

They say whatever they please but answer questions they will not. They shoot off their mouths to stoke a debate, the purpose being to deflect attention from the real issues at hand. They have only one aim – to see that you, the people, do not raise your voice to ask basic questions such as why the rupee has fallen to a historic low and the petrol price has soared beyond the Rs 86 mark.