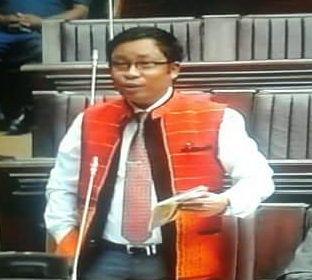 Congress minister Buddha Dhan Chakma resigned from the ministry on the issue of denial of MBBS seats to Chakma studnets in Mizoram. Credit: Facebook

The ongoing controversy over the denial of seats in medical colleges to four students belonging to the Chakma community of Mizoram by the state government from its quota in spite of meeting the eligibility criteria has become more complex with the central government, without stating any reason, reducing the number of medical seats it allotted to the state for the 2017-18 session.

Local media reports quoting state government sources on August 22 said the higher and technical education department received a notification from the Union health ministry on August 21 stating that it had decided to reduce the number of medical seats from the 2016-17 quota of 25 to 17 for 2017-18.

While the two MPs from the state – C.L. Ruala and R.S. Tlau – failed to get an appointment with health minister J.P. Nadda to seek a reason for the sudden central action, which has received a sharp public reaction in the state, Mizoram education minister R. Romawia has rushed to New Delhi to have an audience with him.

Since some states in the northeast do not have a medical college to train students to become doctors and thereby fill the posts at various government hospitals, certain numbers from the central pool of seats in the medical colleges across the country are allotted to these states every year by the Union health ministry and also by the North Eastern Council.

These seats are thereafter allotted by the respective states to students as per the marks they score in the NEET.

Speaking to local reporters before leaving for Delhi on August 21, Romawia said, “The reduction in medical seat allotment is regrettable as Mizoram faces a shortage of doctors. We are going to appeal to the Union minister to instead increase the allotment.”

In May, the state’s Champai district saw a public agitation on the shortage of government doctors. This was followed by another agitation in Kolashib district after the lone surgeon in the government hospital was transferred to Serchhip district. The protesters blocked NH 54, the only link from the state with the rest of India. The five-day blockade affected the supply of essential goods to the state.

Meanwhile, bowing to the demand of the powerful student body Mizo Zirlai Pawl (MZP) and some other Mizo civil society organisations, Buddha Dhan Chakma, the lone MLA from the Chakma community of the state and minister for sericulture and fisheries in the Congress government, tendered his resignation to chief minister Lal Thanhawla on August 22 on the issue of denial of medical seats to the Chakma students. He alleged racial discrimination against his community by the state government.

Though the government initially allotted seats to the Chakma students as they met the required marks, it later withdrew its decision due to opposition, mainly from MZP, which demanded that the medical seats from the state quota should only be allotted to students belonging to the Zo or Mizo community. Though the Chakmas are residents of the state, most Mizos don’t consider them as “original inhabitants” of the state.

According to political observers, the interlinked issue about shortage of government doctors in the district hospitals and the central government’s decision to reduce the number of medical seats allotted to Mizoram soon after the denial of seats to the Chakma students would likely be a key issue in the state going to polls early 2018.

Interestingly, though Meghalaya has a medical college with a reservation of seats for local students, the Union ministry has increased the quota for the state for MBBS seats from the central pool this year. From the existing 26 seats reserved for students from Meghalaya in various medical colleges across the country, the number has been raised to 42. Like Mizoram, Meghalaya is also headed for assembly polls in 2018.

However, there has also been a cut of MBBS seats from the annual state quota of Arunachal Pradesh, which has put the BJP government in a tight spot. Like in Mizoram, the Union health ministry has not given any reason to the Arunachal government for the sudden reduction of seats for the 2017-18 session.

The Assam government has proposed a change in its existing guidelines related to granting employment on compassionate grounds to a family member of a government employee who dies in harness.

On August 21, state finance minister Himanta Biswa Sarma said at a press meet in Guwahati that the government has decided to come up with a new Compassionate Family Pension Scheme. He said, as per the new draft scheme, the families of government employees who die in the course of their employment would continue to receive their salaries till the set date of retirement from work had he/she been alive.

“If an employee dies before his or her retirement, the family pension, which will be equal to the pay drawn by the deceased employee, will be paid to the family till the date of his deemed retirement had he been alive. The family will also continue to get the increments and other benefits entitled to the deceased employee,” the minister said. He said the scheme would be applicable to the families of those employees who have died in harness on or after April 1, 2017.

The state government’s present appointment policy on compassionate grounds, the minister said, “has not been able to adequately meet the demands of the families due to many reasons, including lack of eligibility of a family member to fill a certain post. However, this new policy will not stop the family from facing any financial difficulty arising from the death of the employee.”

The new policy has been uploaded on the ministry’s website for comments and suggestions from state government employees until August 27, before it is to be placed at the cabinet meeting scheduled next month.

Manipur: Woman denied burial in native village for belonging to a different denomination of Christianity 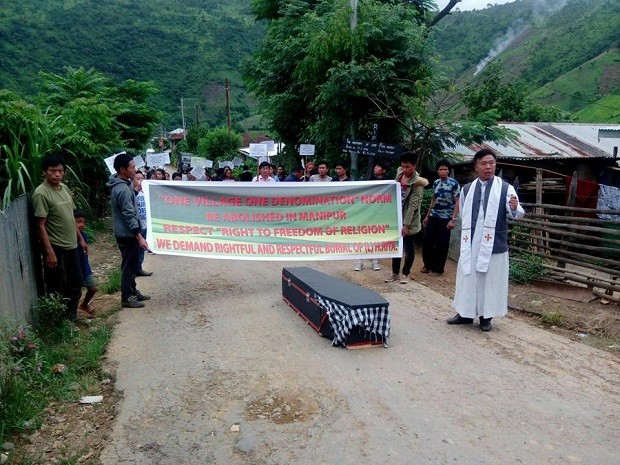 Protest in Ukhul, Manipur, against denial of burial space to a woman in her village for belonging to a different denomination of Christianity. Credit: Facebook

On August 17, Manipur’s capital city Imphal witnessed a rally organised for a cause far different from the ones usually seen in the conflict-ridden state. The rally was carried out against the denial of burial space to a 42-year-old woman’s body in her husband’s native village in the state’s Ukhrul district.

Belonging to the Naga Thangkul community, the deceased, Rita Haorei passed away on August 7, following which her husband wanted to bury her in his native Leingangching village.

However, the villagers led by its chief refused to give space to Rita’s body because, as per local media reports, she belonged to a different denomination of Christianity. While the villagers belong to the Baptist Church, Rita’s family is Roman Catholic. Seven years ago, her family along with some others from the village, converted to the Catholic denomination, which reportedly led the village chief to excommunicate them. Thereafter, Rita’s family began living in Litan village of the district, some 40 km from Imphal.

A joint action committee formed to take up the “burial controversy” also submitted a memorandum to chief minister N. Biren after the rally, seeking his intervention so that she could be buried peacefully in the village. The JAC also appealed against the unwritten law seen in many parts of the state and the northeast – one village, one denomination as “it is inhuman and violates basic fundamental rights.”

On August 16, there was another rally organised by the JAC in Ukhrul where hundreds of Catholics took part demanding space for Rita’s body in Leingangching village. Meanwhile, the body has been kept in the Catholic Church in Litan village.

Recently, a similar controversy was reported from Mylliem village in the East Khasi Hills district of Meghalaya, where a man belonging to the indigenous Niam Khasi faith was denied space for cremation in the Christian-dominated village. Following intervention by the local police, the family could perform the Niam Khasi rituals and cremate him within the village.

In July, yet another case of denial of space to a woman’s body was reported from Margherita town in upper Assam.

While the body of the woman, belonging to the Hindu community, was denied entry in the town’s cremation ground for marrying a Muslim man, the authorities in charge of the burial ground refused to give her space as she was a Hindu. Finally, her body had to be taken to her native town Tinsukia by her parents and cremated as per Hindu rituals.