A 25-kilometre stretch makes it difficult for people of 14 villages to access healthcare, education and many other services. 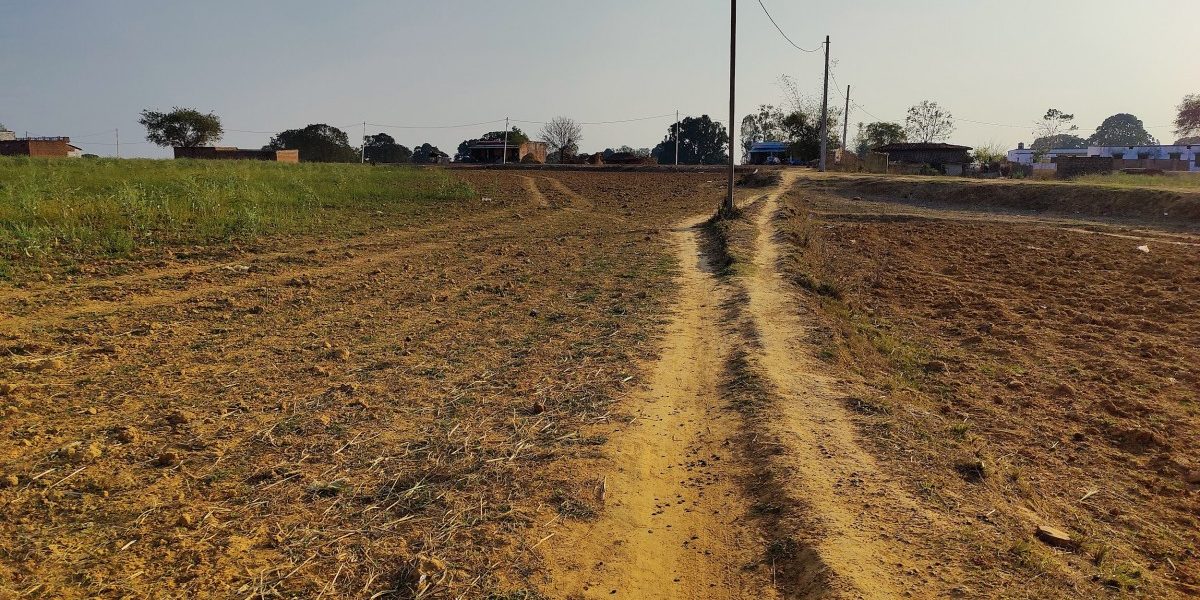 The road connectivity between Hallia and Matawar region is poor, as there are no pucca roads. Photo: Ismat Ara/The Wire

Mirzapur, Uttar Pradesh: Thirty-year-old Kalawati gave birth to a lifeless girl child on February 22. A day later, she is sitting in a corner of her house in Rampur Naudiha village, washing clothes. A few women from the village surround her and sit in silence.

“I lost my child because of the wretched road,” Kalawati fumes in anger.

She is talking about a 25 kilometre stretch of kutcha road that connects her village to Hallia, where the nearest government hospital is situated. 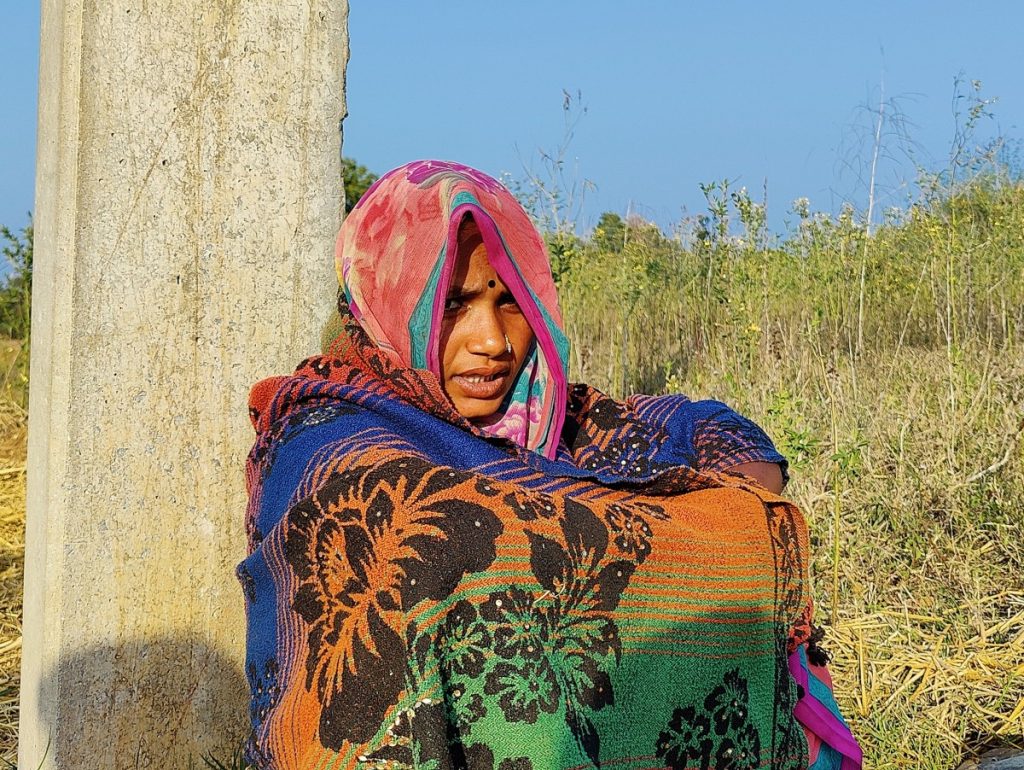 Kalawati is recovering from weakness without any supervision from doctors. Photo: Ismat Ara/The Wire

During Kalawati’s four previous pregnancies, her family had hired a private vehicle to take her to the hospital. But this time, she went into labour a little earlier than expected. The family could not immediately arrange money to hire a vehicle.

They called an ambulance. It refused to come to the village, Kalawati’s mother-in-law, Kailashi claimed. The other women nod in silent agreement. 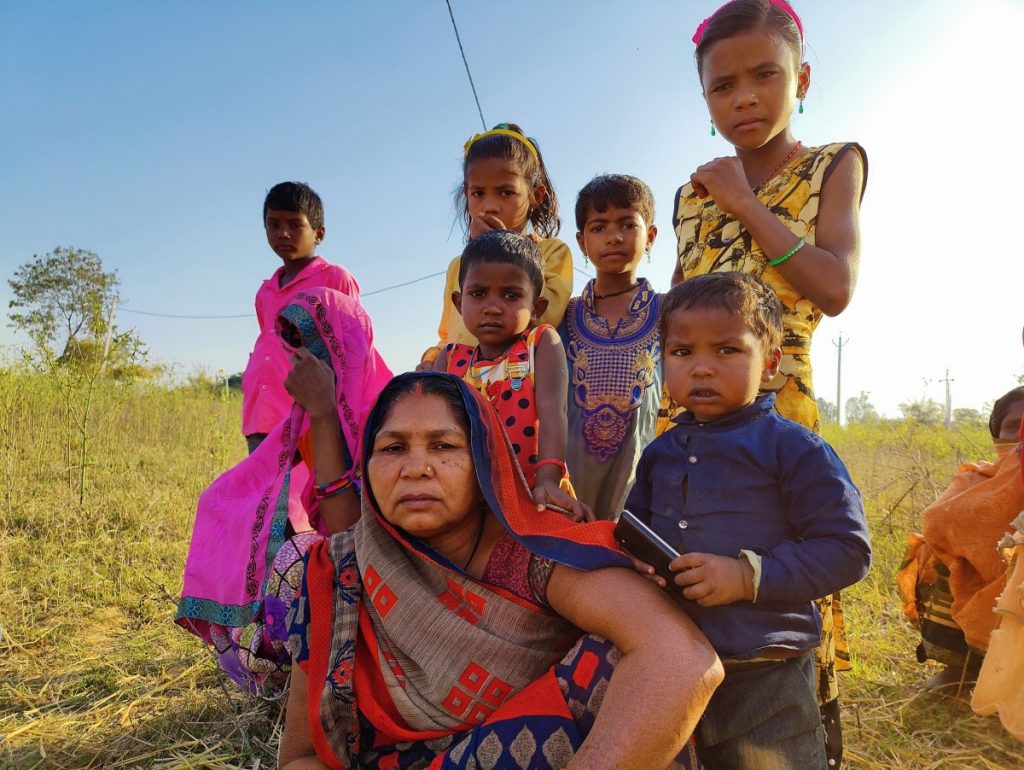 Kailashi wants the government to compensate for the loss of her granddaughter due to bad roads. Photo: Ismat Ara/The Wire

After Kalawati’s labour pain became more intense, the family started going house to house to request money to hire a private vehicle. They were able to collect Rs 2,000, the amount charged by private vehicles to reach the hospital in Hallia, a day later.

By the time a vehicle was hired, Kalawati was already in excruciating pain.

When she finally reached the hospital and delivered the child, it was a stillbirth. 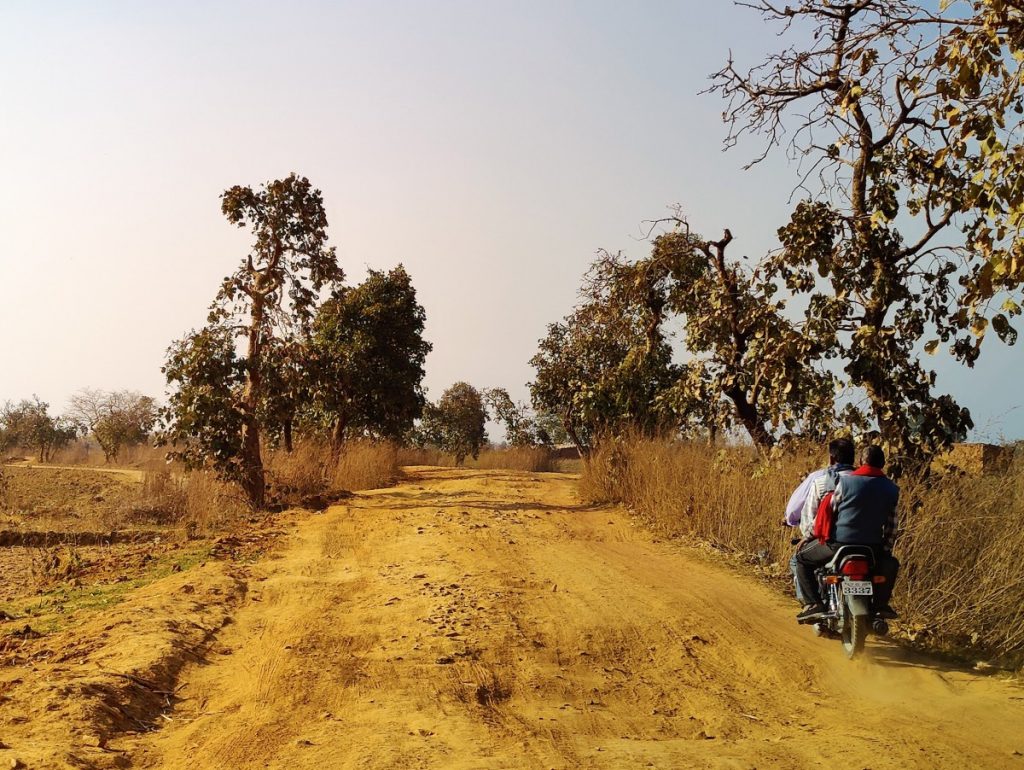 The existing road between the two regions is extremely poor, and there is no alternative road either. Photo: Ismat Ara/The Wire

Kalawati wishes that her husband could be with her. Komal works as a driver in Mumbai and could not get any days off to visit his village and be with his wife.

The 14 villages fall in the Chhanbey constituency, one of the four constituencies in Mirzapur, which will go to the polls in the last phase of assembly elections in UP.

The 14 villages have unanimously announced their motto for this election season: “No Road, No Vote.” 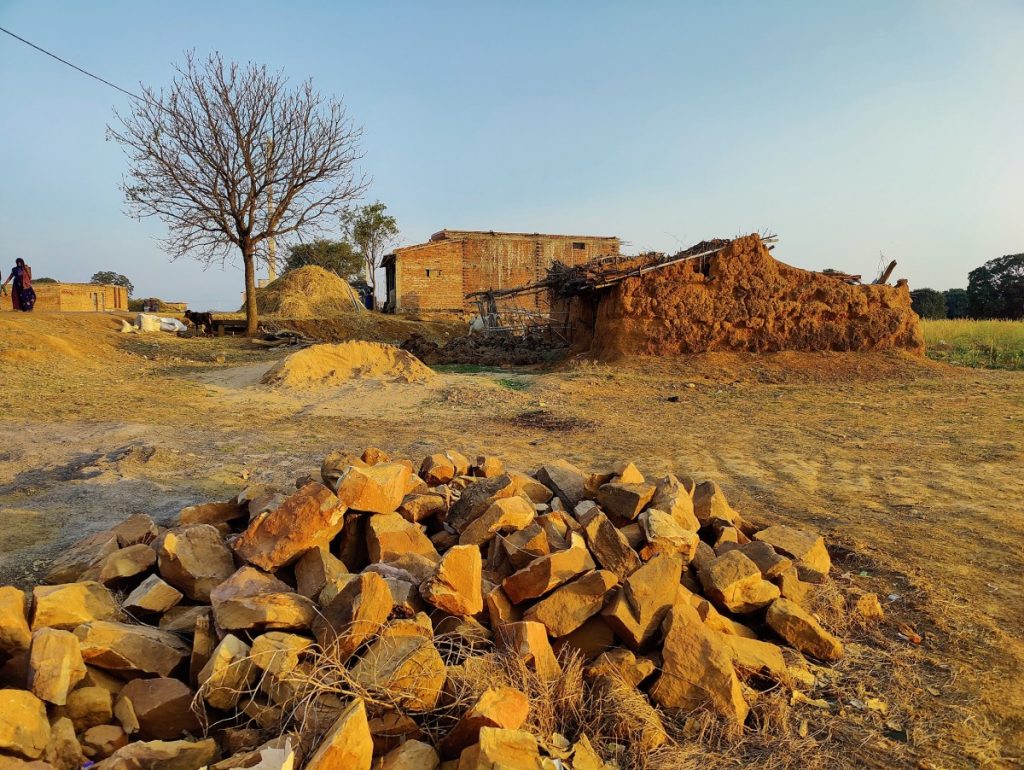 While there are a few puccha houses in the region, kutcha houses dominate the villages. Photo: Ismat Ara/The Wire

When this correspondent was going to Rampur Naudiha village, a local in Hallia block market offered to be the guide. “You won’t be able to reach there by yourself. You need a local,” said Chandresh Kumar Agrahari, who runs a small mobile repair shop there.

A National Highway connects Mirzapur city to Hallia block, but from there the road to Rampur Naudiha is kutcha. Construction is ongoing at two places, with narrow, elevated and risky roads. The 25-kilometre kutcha road takes about 2 hours to cross.

Agrahari gets ready to leave and wants to take his 4-year-old son along. He was born in Rampur Naudiha. Agrahari prefers to stay in the city because of transportation problems. He wants to come along because he sees it as an easy opportunity to go back home. 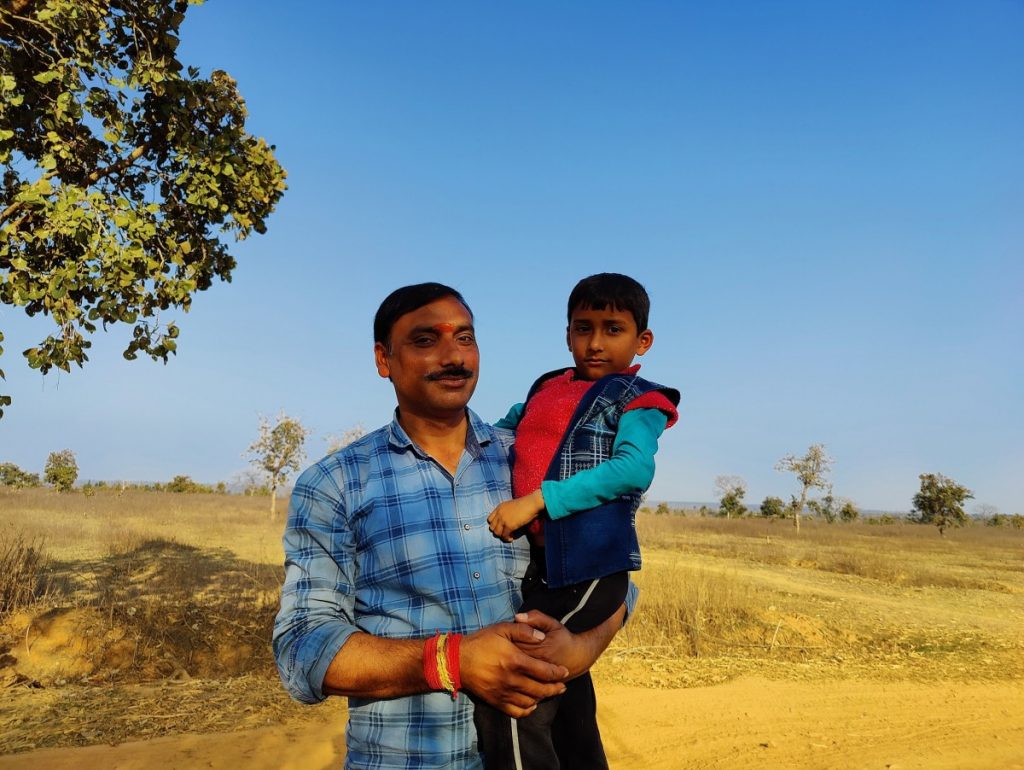 Agrahari belongs to one of the villages boycotting the elections, but he is a staunch supporter of the BJP, he said. Anupriya Patel, the Apna Dal leader in alliance with the BJP, had even visited his uncle’s funeral, he said.

After getting into the car, he warns that there will be no mobile network available once we enter the forest area. 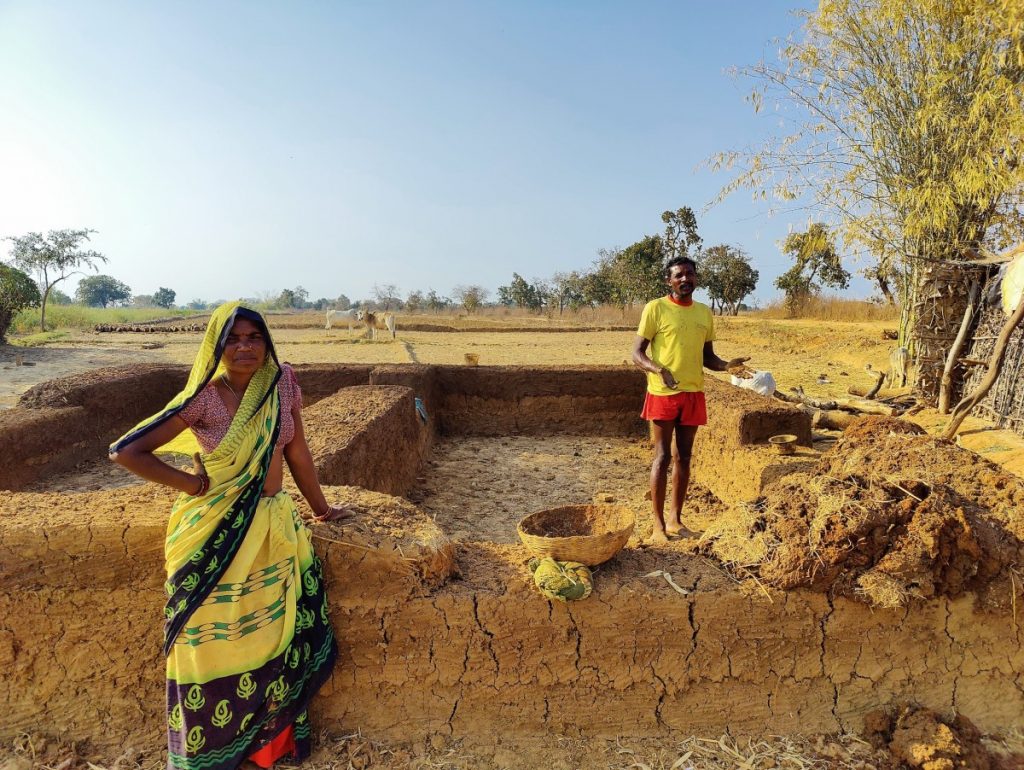 Most villagers are directly or indirectly engaged in farming activities. Some also work as labourers on daily wages. Photo: Ismat Ara/The Wire

While crossing the kutcha path, the driver asks Agrahari if this area, surrounded by forests with zero mobile connectivity, is unsafe. “No. Under the Yogi government, crime has gone down,” he answered.

However, just a few months ago in October 2021, a case of rape and murder of three sisters village had shaken the entire region. Their bodies were later found thrown in the forest area. An FIR was registered in the Hallia police station, but according to the villagers, no investigation has been done to identify the culprits.

Villagers said that the police came to the area to inspect, but only once. They never returned because their vehicle tank got damaged because of the bad road, they claimed. A few days later, the mother too killed herself.

Girls dropping out of schools

After the incident, many parents have withdrawn their girls from schools. Eighteen-year-old Suman is among the few who still study. She is studying BA at Panscheel Degree College in Hallia.

Because the Madhya Pradesh border is only 15 kilometres from Matwar, there are two private buses that cross the area, helping the villagers with transportation.

However, the villagers must wait for the private buses and travel as per their schedule, and as a result, they cannot predict when they will be back once they have left. Sometimes, the route of the buses changes.

Her father Balinder says that he wants Suman to be educated. “That’s why I enrolled her in college. But it is not possible to send her every day because of financial constraints. It is also not safe because there is no public transport,” he said.

So Suman goes to college once every 15 days.

The private buses charge Rs 20 from students but Rs 50 from other adults.

But that is not all. Suman, after getting off the bus, must take a rickshaw because, by the time she reaches Hallia, she is already very late for her classes.

Her 17-year-old brother goes to study in Mirzapur city, while a 13-year-old sister studies in the local village school, which has facilities only till Class VIII. 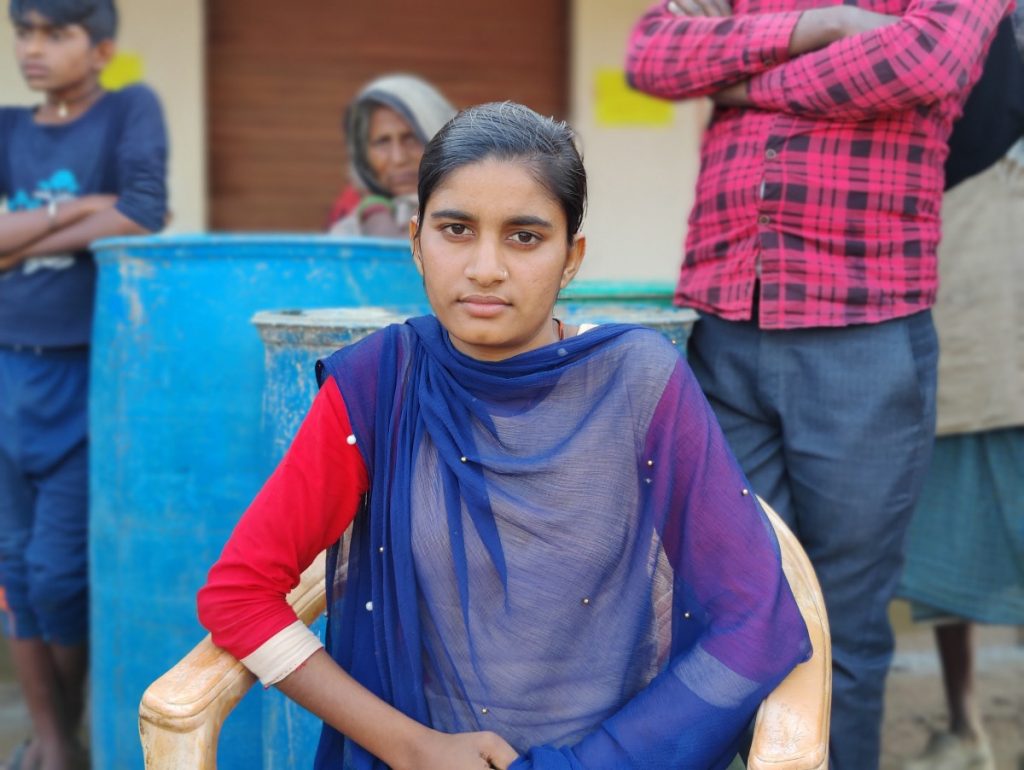 Suman is among the few girls in this region who are pursuing higher education despite all odds. Photo: Ismat Ara/The Wire

Roughly 20,000 voters from these 14 villages with a population of about 40,000 have said that they will boycott the elections this time.

Every time a campaign vehicle crosses the region, they hold up a poster that reads, “Road nahin toh Vote nahin (No Road, No Vote).” 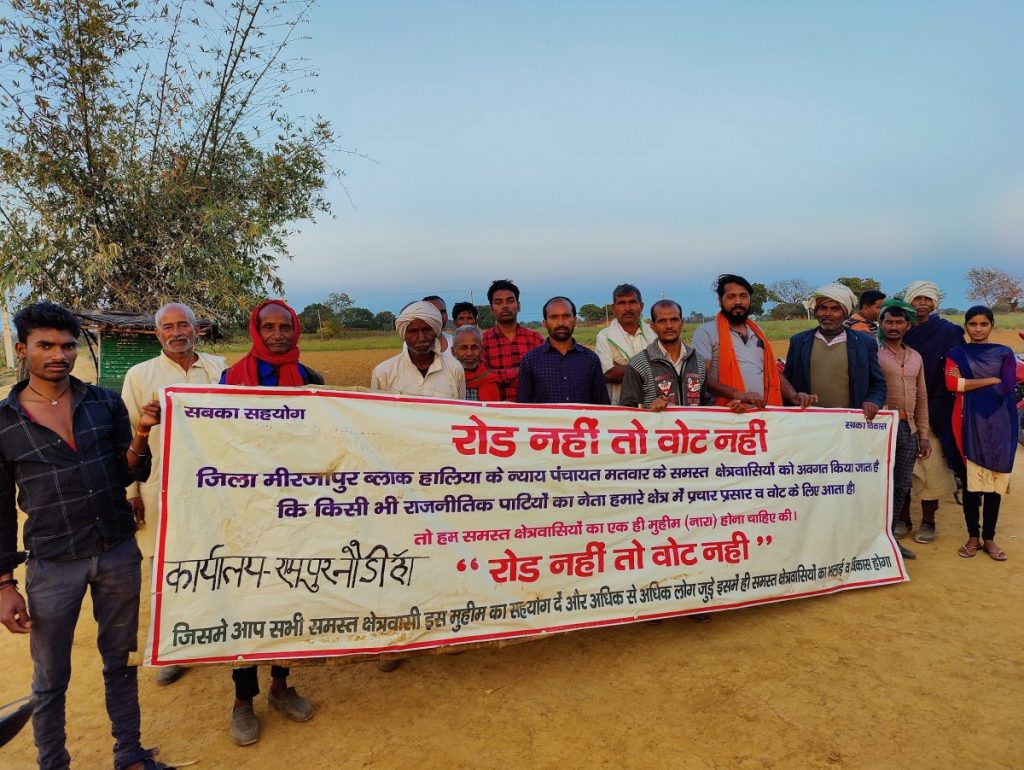 The villagers are demanding a road. Photo: Ismat Ara/The Wire

A 35-year-old woman had died a few weeks ago, while on her way to the hospital. Every few weeks, a similar death occurs, sending shivers down the spine of the villagers.

Among other issues are the lack of secondary schools (after Class VIII), no college, no hospitals, no public transport and stray cattle destroying crops of farmers.

Dheeraj Kumar, a villager who has lost his 2 bighas of wheat crop, says that he has spent countless nights sitting in his farmland with a stick to guard the crops from stray animals. 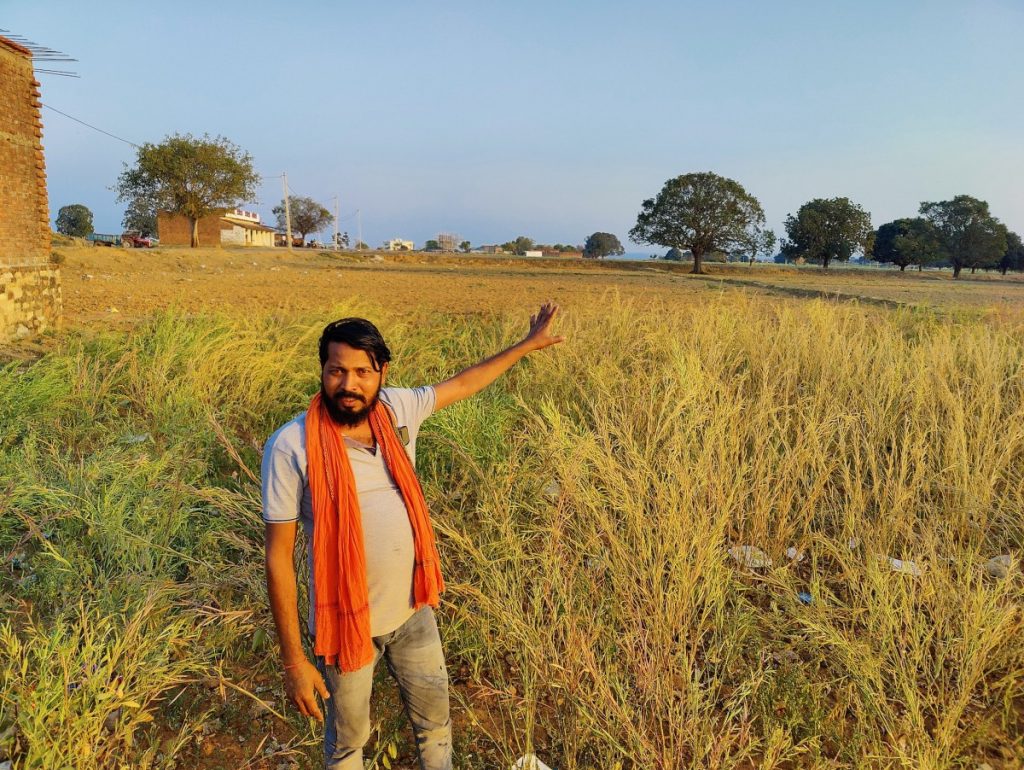 The villagers accuse the politicians of making false promises when seeking votes but neglect the region afterwards.

When passing by these villages, there are clinics every few kilometres.

When this correspondent asked one of the doctors where he had studied, he said that he is not “that kind of a doctor”.

He has “practice” but no degree, he said. Dr Sunil Kumar Pal is one of the few doctors who holds a degree – a diploma in physiotherapy.

He says he could be earning much more in the city if he opened a clinic there, but people here need doctors like him.

He charges Rs 50 as consultation fees. 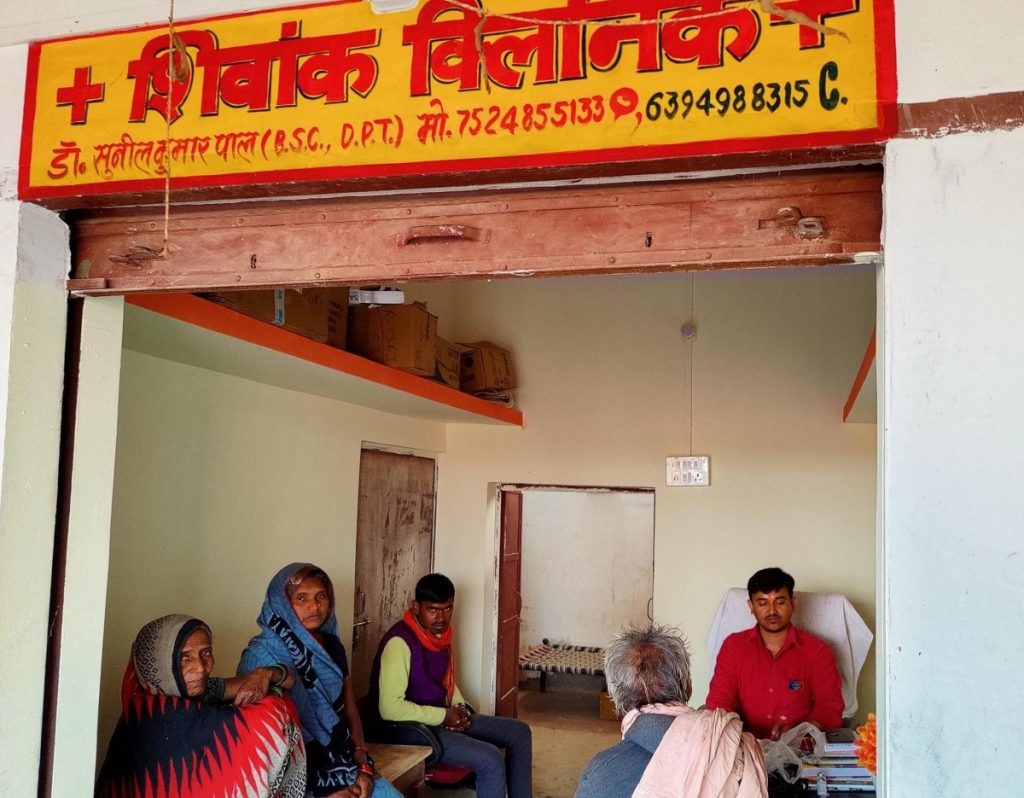 Back at Kalawati’s house, the toilet has broken down. Her mother-in-law Kailashi said that Kalawati now has to wash clothes in public view.

Most toilets constructed in the village under the Swach Bharat Abhiyan (Pradhan Mantri Sauchalay Yojana), broke down shortly after being constructed, an elderly villager said. 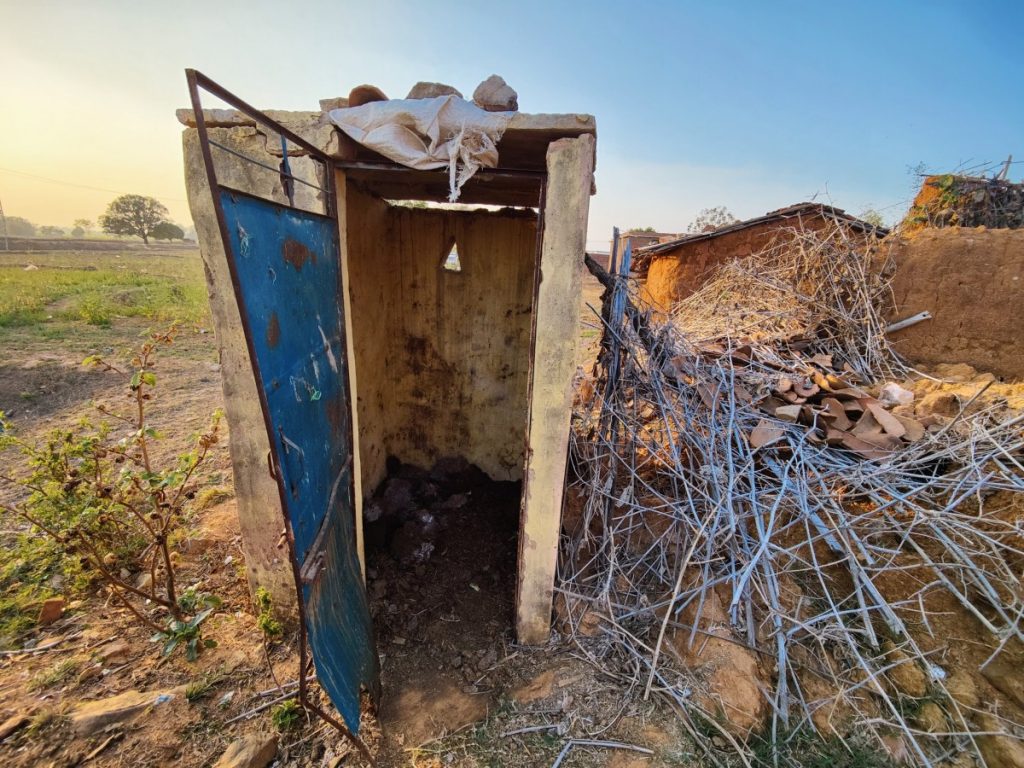 Most toilets are either incomplete or have broken down. Photo: Ismat Ara/The Wire

He said that while on paper, at least 500 toilets were built, only about 250 were actually constructed. Most of them are currently not functional. Some are half-finished while others have broken walls and cracked ceilings.

Like a majority of villagers, Kalawati too lives in a kutcha house. Just outside, some cauliflower and potatoes are growing in a small field which they use for self-sustenance.

Kailashi is mourning the loss of her granddaughter. Kalawati said that a few decades earlier, people did not want female children but that has now changed.

Today, the death of a girl child because of poor infrastructure and lack of medical facilities, has enraged all the villagers who are demanding that their voices be heard, she says.

She recounted how even after the child had died, the ambulance refused to drop her at the village. When the family offered Rs 500 for the trip, one ambulance driver agreed.

Manish Sharma, pradhan of the Matawar Gram Panchayat, said that the roads are not getting constructed because the area is under the forest department.

“The administration cannot do anything unless they have clearance,” he said.

According to him, the forest department is opposed to the construction of a road because forest area will have to be cleared in the process.

The Wire visited the nearby forest department office in the area and spoke to some of the workers.

“If roads are made, the forests will get destroyed, there will be accidents, and nature will suffer,” one of them said.

Vijay Narayan Singh, the sub-divisional magistrate of the Lalganj division, reiterated this claim while speaking to The Wire. 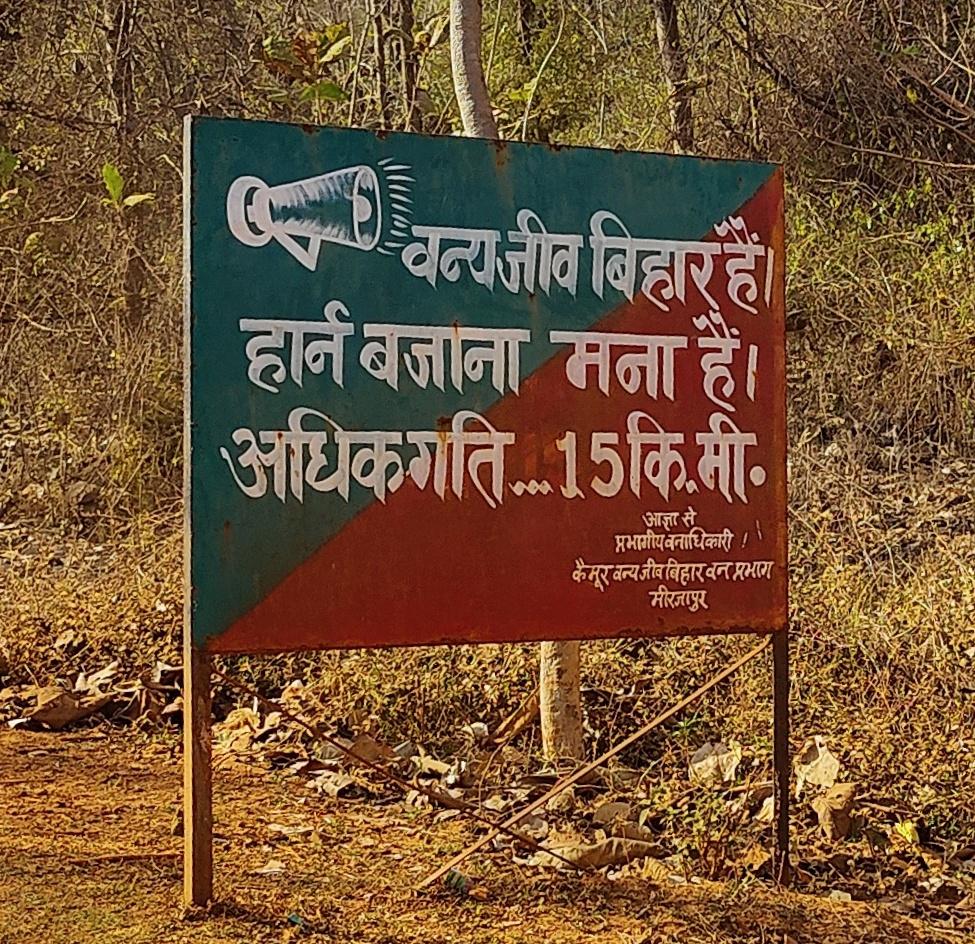 A board by the forest department prohibits use of horns. Photo: Ismat Ara/The Wire

He added that the process will be started as soon as the proposal is approved.

Meanwhile, Kailashi wants the government to compensate the family with financial assistance. Kalawati adds, “Even if there is no compensation, the road should be made so that no mother has to lose her child again.”