The Adityanath government said 'records' showed that many of the buses in the Congress's list did not have valid fitness certificates or insurance papers. 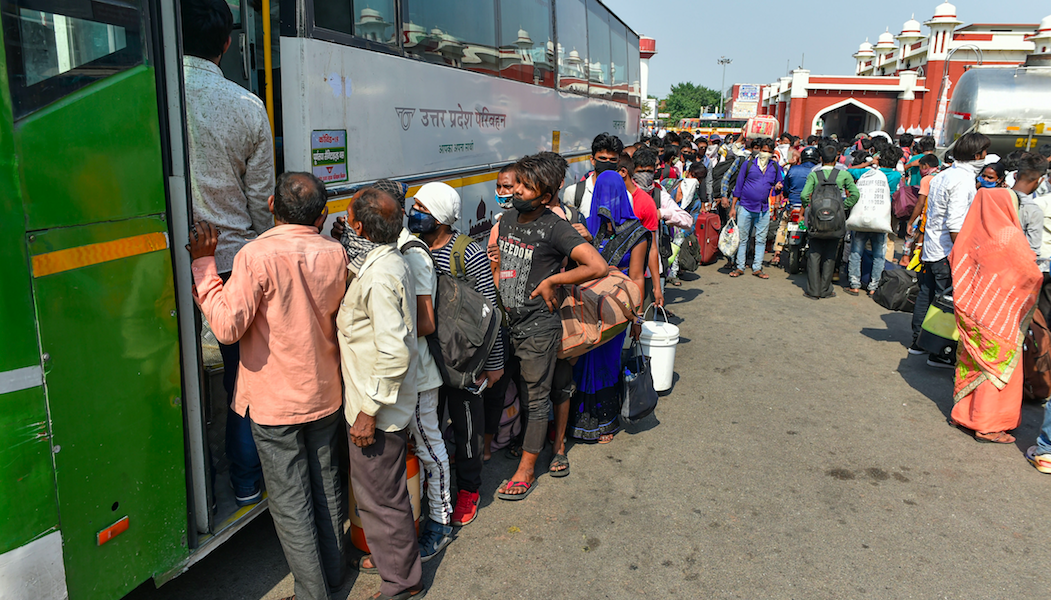 Migrants board special buses to return to their hometowns after they arrived at Charbagh Railway Station from various parts of the country, during ongoing COVID-19 lockdown in Lucknow. Photo: PTI

Also, records showed that many of the buses in the list did not have valid fitness certificates or insurance papers, the BJP government said, accusing the opposition party of playing with the lives of workers.

The FIR against Lallu and Sandeep Singh, who is Congress general secretary Priyanka Gandhi Vadra’s personal secretary, capped a day during which the party traded charges with the Yogi Adityanath government and held a protest at the Rajasthan-UP border.

The FIR charged Lallu, Singh and others under Indian Penal Code sections related to cheating and forging documents.

The Congress rejected the UP government claim on its list containing the numbers of other vehicles, challenging it to conduct a physical verification of the buses.

Later, a state government spokesman said about 100 vehicles on the Congress list were not buses.

Of the buses, 297 lacked either a fitness certificate or valid insurance papers. As the war of words escalated, UP Congress Chief Ajay Kumar Lallu and other party workers reached the Agra border, where they argued with policemen and staged a dharna.

Lallu was seen being carried away from the protest site to a car, with four policemen holding his arms and legs. A UP Congress spokesperson said he was taken to a police station in Agra.

According to the Congress, most of its buses are massed at the Rajasthan-Uttar Pradesh border, awaiting permission to cross over into the state’s Agra district.

In a tweet in the evening, Congress general secretary Priyanka Gandhi urged that the state government should at least let the buses found fit by it to enter the state. She said there were 879 such buses.

UP government has crossed the limit, she said, accusing it of creating hurdles in an effort to help migrant workers stranded due to the coronavirus lockdown.

She said if the Yogi Adityanath government wishes the Congress can put BJP banners on the buses, but they should be allowed to run.

“The Congress has got trapped in its own net of deceit, he tweeted in Hindi.

The row erupted on May 16 when Congress general secretary Priyanka Gandhi Vadra offered to provide 1,000 buses for migrant workers heading for their homes in Uttar Pradesh.

The Congress initially claimed that the state government was ignoring the offer with Chief Minister Yogi Adityanath refusing even to give an appointment to a party delegation.

Even while accusing the Congress of playing politics over the plight of migrant workers, the UP government on Monday formally accepted the offer. It asked the Congress to submit a list of the buses and their drivers and conductors.

In an email received by Priyanka Gandhi’s private secretary Sandeep Singh at 11.40 pm Monday, the Uttar Pradesh government asked the Congress to send the buses to Lucknow by 10 am on Tuesday.

The aide wrote back to the UP government, saying that sending empty buses to Lucknow was inhuman and the product of an anti-poor mindset when thousands of workers are gathered at UP’s borders.

UP’s Additional Chief Secretary (Home & Information) Awanish Awasthi responded by agreeing to take charge of the buses at the Delhi-UP border itself.

He suggested that 500 buses should be stationed at the Kaushambi and Sahibabad bus stands in Ghaziabad, just across the border from Delhi. The remaining 500 should be sent to Noida.

Awasthi said directions have been issued to the Ghaziabad and Gautam Buddh Nagar district magistrates to make use of the buses immediately after checking the permits, fitness certificates, insurance and driving licences of the crew.

But the row reignited hours later when the UP government said the list also contained registration number of vehicles other than buses.

“In the list of buses provided by the Congress, there are motorcycles, three-wheelers, an ambulance and private cars, said Mrityunjay Kumar, media advisor to the chief minister.

“There are 1,000 buses. If the UP government has any doubts about them, they can conduct a physical verification of the vehicles at the state’s border,” he said.

In another letter, Priyanka Gandhi’s private secretary Sandeep Singh said the buses cannot be brought to Noida and Ghaziabad as the government has not given permission for them to enter Uttar Pradesh from Rajasthan.

Deputy Chief Minister Keshav Prasad Maurya compared the episode to scams during the Congress terms at the Centre.

The Congress is making fun of labourers by providing details of autorickshaws and motorcycles in the name of buses. Misleading people by telling lies is in the DNA of the Congress party,” he tweeted in Hindi.

He asked why the Congress couldn’t send the buses through the government in Rajasthan, where it is in power.

“The Congress is trying to malign the image of the UP government, he said.