While political parties took time to make sense of what was happening, the neoliberal system lost no time to forge its own response. 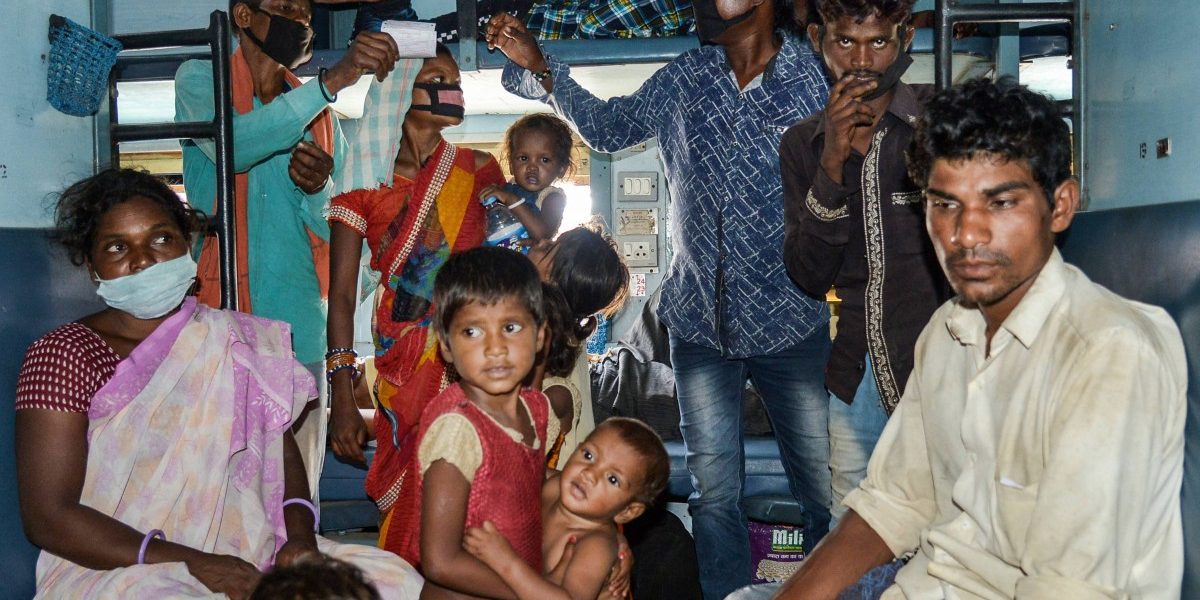 Migrant workers on a train home in Chhattisgarh on June 26. Photo: PTI

Aman Abhishek’s piece on the media during the migrant crisis in the wake of the epidemic of COVID-19 (The Wire, 25 June, ‘How the Modi Government Manufactured Public Opinion during the Migrant Crisis‘) is timely. Many good hearted journalists indeed thought that notwithstanding a definite pattern in the media coverage, the media by and large played a commendable role in bringing the “migrant question” to the public eye. In the background of such innocence bordering on glib acceptance of media’s virtues, Abhishek’s commentary underlines the need for a larger discussion on the idea of the public, and by extension mainstream politics, by which I mean, mainly formal, organised politics.

The media may have set the tone, as Abhishek’s piece shows, but this was facilitated by the strange silence of mainstream political parties who perhaps owing to lockdown restrictions hardly raised any voice in the immediate aftermath of the breakout of the migrant crisis. By the last days of March and the first fortnight of April, the severity of the crisis was evident. Reports were coming out by mid-April that migrant workers had not been paid their dues of March and were being evicted from their shelters, and they had been frantically searching for modes of transport to go back home.

Another fact of severe consternation was the staggering, immeasurable dimension of the crisis. Central trade unions and mainstream liberal and left parties took time to understand even the surface of what was happening. There was no united statement, no attempt to build a platform of solidarity, no attempt to convene an opposition chief ministers’ conclave to forge a policy on issues of health and work of the migrant workers, no concerted effort to move the judiciary, and no minimum agenda on the issue of the epidemic and migrant workers.

Solidarity initiatives were local, and mostly spontaneous. The much reviled NGOs, independent groups and associations, and localised political forces fared better. What we may call a spirit of militant philanthropy as a form of solidarity emerged all over the country, and while we may say that thanks to the media we have now a rough picture of what happened in these two months (April-May), we have very little idea of the way solidarity emerged as a principle of social response to the epidemiological crisis – by itself a combination of three crises: a public health crisis, an economic-financial crisis, and a labour crisis.

Also read: Travails and Travesties: The Plight of the Migrants Who Didn’t Leave Delhi

We can only say that while acts of solidarity indicated a faint sketch of the values of a post-coronavirus society the nation desired, solidarity was not enough as a critical force in building militant opposition to the neoliberal management of the epidemic. In the wake of this new crisis, institutionalised politics was a helpless spectator. We saw its stupefied state as the repeated repression of workers, for instance in Surat, went almost unchallenged.

The media not only facilitated the incorporation of the issue of migrant workers in the agenda of neoliberal reforms, the orientation of media response was also instrumental in “awakening” institutionalised politics in a particular way to the presence of the migrant workers. The migrant appeared as a fault line in the country’s access system to essential conditions of life, such as health, food and shelter.

No wonder, in the repeated statements of Rahul Gandhi, the issue of migrant workers did not feature centrally, notwithstanding his meeting with migrant labourers in the national capital near the Sukh Dev Vihar flyover on May 15. The whole month of April had passed. Likewise, the Inter-State Migrant Workmen Act of 1979 was resurrected by only do-gooder scholars and lawyers. The All India Trade Union Congress (AITUC) born in 1920 passed its centenary year amidst the silent defeat of organised working class politics in the time of the epidemic.

The question should be raised therefore, what is the nature of this “public” that constitutes the mainframe of institutional politics, the “public” that is supposedly the stuff of public politics, public health and public claims? More fundamentally, we must inquire, how was politics demobilised in the wake of the pandemic?

The question cannot be glossed over once we notice that the same media which, till this February was full of politics, covering riots, killings, arrests, civil disobedience, rallies for constitutional justice, demand for citizenship, suddenly went silent and transferred attention to not only the pandemic, but to the scenes of homeward migrant workers travelling hundreds of kilometres, many of them dying and disappearing from the public scene.

We do not know if the mainstream opposition parties realised that a crisis, that much abused word, was indeed overwhelming the country. But it’s important to note that while they took time to make sense of what was happening and formulate a response, the neoliberal system lost no time to forge its own response.

One of its first acts was to subsume the issue of migrant labour under an agenda of reforms. COVID-19, as Prime Minister Narendra Modi repeatedly said, called for drastic reforms. The country couldn’t go back to pre-corona days. In contrast, there was mainstream opposition’s deafening silence. Its imagination of politics was limited to the old, routine parliamentary confabulations and the prescribed mode of union movement of labour protest. This imagination had no space in it for a new vision in the wake of the COVID-19 crisis. And no place for migrant workers and public health as two central elements of a society that cares for life.

Recall, in contrast, the Union government’s policy reform announcements and the prime minister’s addresses to the public. On May 30, as the main phase of the nationwide lockdown was ending, the prime minister in a letter to the nation on completing one year of his second term, said that the nation had taken historic decisions and progressed rapidly in the last year. However he conceded that migrant workers, labourers and others had undergone tremendous suffering during the coronavirus crisis. He assured the people that India, by addressing the plight of “our labourers, migrant workers, artisans and craftsmen in small scale industries, hawkers and such fellow countrymen (who) have undergone tremendous suffering,” would set an example of post coronavirus economic revival.

This could be achieved through policies specifically designed for migrant workers. Therefore on June 20, Modi launched an employment scheme with an outlay of Rs 50,000 crore for migrant workers who returned home during the lockdown. Modi further said during the nationwide lockdown, talent (as a national asset) returning from cities to villages, would boost rural development.  The Garib Kalyan Rozgar Abhiyaan was to be implemented on a mission mode in 125 days in 116 districts in 6 states of the country.  On 26 June a web portal for registration was launched. Public works were now to be part of creating an atmanirbhar Bharat – a self-reliant India. Make no mistake: the migrant labour issue was subsumed in this neoliberal structuring.

While the mainstream opposition rightly focused on labour deregulation mooted as part of the restructuring of the economy, it did not present an alternative broader vision of a post-corona society, which would put emphasis on policies and principles of care, protection of life and security of migrant workers and caregivers. Such a vision called for imagining a new organisation, devolving public power to the lower levels.

A critique of the two instruments on which the government’s administrative-police response to the crisis rested – the Plague Act (Epidemic Diseases Act, 1897) and the National Disaster Management Act (2005) – was absent in the mainstream political discourse. The mainstream political critique turned out to be fragmentary, superficial and haphazard.

On May 14, 2020, finance minister Nirmala Sitharaman said the government has initiated a move to bring all 44 labour-related laws under four labour codes, of which the parliament was aware. The proposed laws, as indicated in the respective Bills tabled in the parliament, would significantly dilute the Factory Act, 1948, and reduce the role and power of factory inspectors to mere facilitators. Instead of acting as a watchdog to ensure factories are run in conformity with labour laws, the inspectors would enable the employers to run their plants. Little attention would be paid to ensuring minimum wages and stipulated working hours.

Sitharaman also announced free rations for two more months for eight crore migrant workers. She confessed that the government of India had not collated any data about the workers and had arrived at this figure by adding up all the reports given by the state governments about migrant workers in various states who had been sheltered and fed at various government-run or NGO-run centres. It seemed that the old adage was coming to haunt the country once again: Never let a crisis go waste.

Watch: Javed Akhtar Recites His Poem on the Plight of Migrant Labourers

The crisis, using public health concerns, led to a restructuring of the economy. Social Darwinism and neo-Malthusian population policies were now geared to produce an India which could claim in bringing the  country back from the edge of disaster with “minimum loss”. The emphasis was on “productive labour” and “productive economy” instead of saving lives by expanding public health systems and social security, including access to food. While money supply was further squeezed by refusing to directly transfer cash to millions of poor people, credit and loans were given a fillip. A contract farming driven food grains market was opened up. The public health crisis became the occasion for counting only “productive labour” and letting the “unproductive” die.

That the mainstream political opposition failed to make any worthwhile intervention was not because it was ignorant of the existence of migrant workers. But the opposition could not think beyond conventional trade unionism and institutionalised routine politics. Failing to notice the impending crisis, the opposition forgot that the migrant question was a “social” question. In the absence of a new social vision, the neoliberal regime was able to co-opt the migrant question in the economic recovery agenda. All that was required was an apology from the ruler for the distress of the migrants. The prime minister tendered that apology on March 29.