Ram Nath Kovind’s presence in Rashtrapati Bhavan will not make any difference to the ongoing atrocities against the Dalits. What can Mayawati do to keep the struggle going? 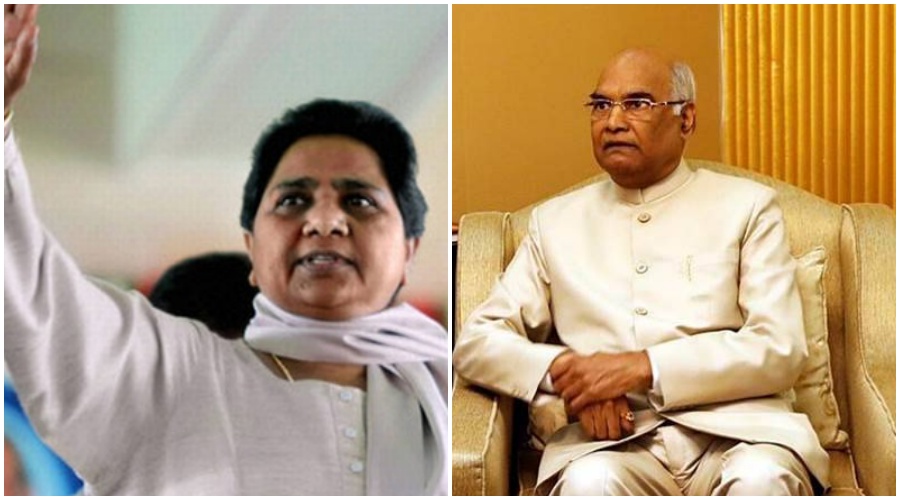 Mayawati created a ruckus in the Rajya Sabha on the very first day of the monsoon session of the parliament. It is interesting that the BJP, which won a clear majority in the Uttar Pradesh elections in April, was afraid of her questions on the atrocities against Dalits and other minorities across the country. Within minutes of her starting to speak, all members of the ruling party were on their feet to disrupt her. Why were they so afraid of the issue? Why they did not allow her to speak?

Mayawati responded by shouting at the ruling party and walking out of parliament. Later that evening, she resigned from the Rajya Sabha. Her resignation was accepted yesterday after she met vice president Hamid Ansari, the chairman of the Rajya Sabha, with a second letter, a one-line handwritten note. Does this whole episode show Mayawati’s weakness or the BJP’s nervousness?

The BJP did not pick Ram Nath Kovind as its presidential candidate out of love for the Dalits. The BJP and its ideological parent, the RSS – primarily headed by Brahmins – has never developed the idea of abolishing untouchability or worked out a strategy to make Dalits, OBCs and tribals equal partners in Hinduism. The only way to make them equal partners is to demand a radical reform in the Hindu religious structures, including the priesthood position, which is fully under the control of Brahmins. The RSS has been working with the priestly Brahmin class and the peetadhipathis ever since it was formed in 1925.

The BJP government did not intervene in a Supreme Court case deciding whether the Agama Shashtra authority was to confine the positions of priests and ritual performers only to Brahmins or if it should be opened up for all Hindus, irrespective of caste. A two-judge bench of Justices Ranjan Gogoi and N.V. Ramana invoked Article 16(5) of the constitution to hold that “the exclusion of some and inclusion of a particular segment or denomination for appointment as archakas would not violate Article 14 (the right to equality).”

There was no intervention by the BJP government in this case. Why is the exclusion of the Hindu Dalits/OBCs or the Hindu Shudras for the appointment of archakas not a violation of the right to equality? Why did the government not challenge this two-bench judgment and ask for a full bench hearing? The present government is obviously okay with the judgment. This is what sustains casteism in Hinduism. The Dalits have a huge problem with this kind of religion that does not give them equality and now is attacking their food culture.

The Saharanpur Dalits are saying, “We are treated as Hindus by the Sangh parivar and the BJP when it comes to votes, but in the day to day working of Hinduism, we are treated as untouchables”. The RSS has to take up this reform and see that the Dalits who accept Hinduism as their religion (like Kovind) should also have the right to religion in the very same Hinduism. But there, it wants to protect Brahminsm. The UP Dalits have been leading the struggle by forming the Bhim Sena. Mayawati has to take a stand on all these issues as she too is a Dalit who has been challenging this kind of Hinduism whereas Kovind appears a submissive Hindu by accepting all the caste rules including worshipping of cows.

Ambedkar, in his seminal work The Untouchables: Who were they and why they Became Untouchables?, argues that one of the issues that makes untouchables vulnerable for attacks is their historical beef eating culture that goes hand in hand with removing carcasses and working in the leather industry. Since the BJP came to power, the whole economy and culture of the Dalits has been under threat. Will Kovind protect them from this danger? Certainly not. He will go with the RSS agenda, which has now gone to the extent of engendering ‘cow terrorists’ in the country, as the debates in the parliament session have shown.

Several members were worried about this cow terrorism, which is aided and abetted by the Sangh parivar. Now this problem has crossed all limits because the very same government who appears to oppose the ‘cow vigilantes’ has passed rules banning the sale of cattle for slaughter. It has also banned the skinning of dead cattle and wants that dead animals should be burnt. Such rules do not exist anywhere in the world. This has created a crisis in the agrarian sector. All political parties, and not only Mayawati, should fight this kind of primitivism.

The Hindutva forces argue that the cow represents all Hindu gods and goddesses. but do not see to it that only the Brahmins who are eligible to perform ritual pujas also graze all the cows without leaving that work to Dalits/OBCs/tribals and shudras. These Brahminical forces do not graze cows but work out theories to protect them from the very same grazers of the animals. Their children do not feed the animals, but are in political parties as leaders and in universities as professors. These are the forces that oppose reservations in all institutions of governance.

The right to become the president or the prime minister of India by a Dalit or an OBC is guaranteed by the constitution. In 1997, the Congress made K.R. Narayanan, a Dalit, the president. He was within their secular ideological framework. Kovind’s presence in the Rashtrapati Bhavan does not make any difference to the ongoing atrocities against the Dalits. The attack on the Dalit food culture, their right to live, their equal right to study on the university campuses where the Akhil Bhartiya Vidyarthi Parishad is strong, is under attack and needs to be protected.

Mayawati gave up street struggles after Kanshi Ram passed away. Now she has to resort to those struggles or risk becoming irrelevant. It is this situation that forces her to resign. We must wait and see what she does in the future.