Why Mayawati is Likely to Return to Power in Uttar Pradesh 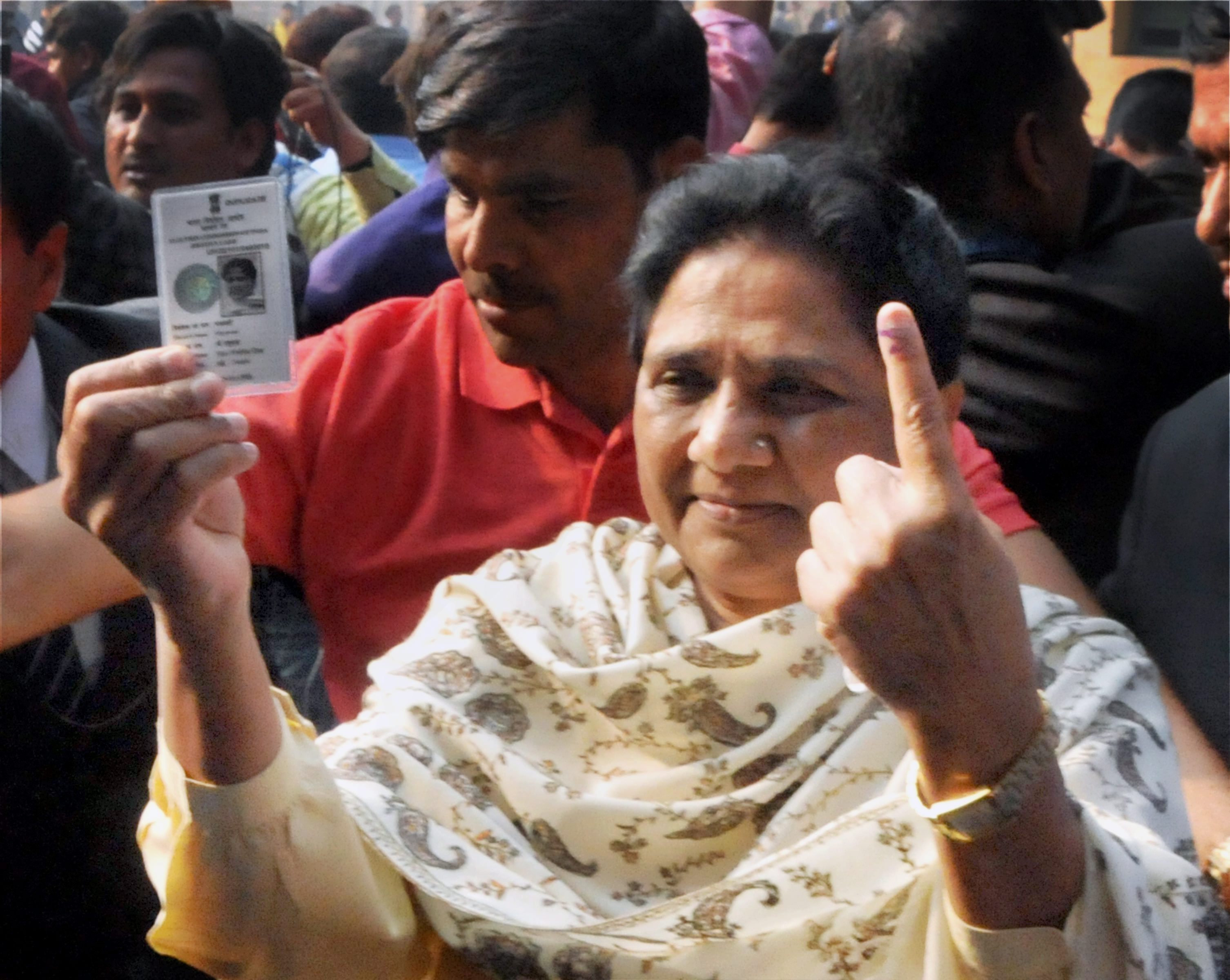 BSP leader Mayawati shows her inked finger after casting her vote in the third phase of the UP assembly elections in Lucknow on Sunday. Credit: PTI/Nand Kumar 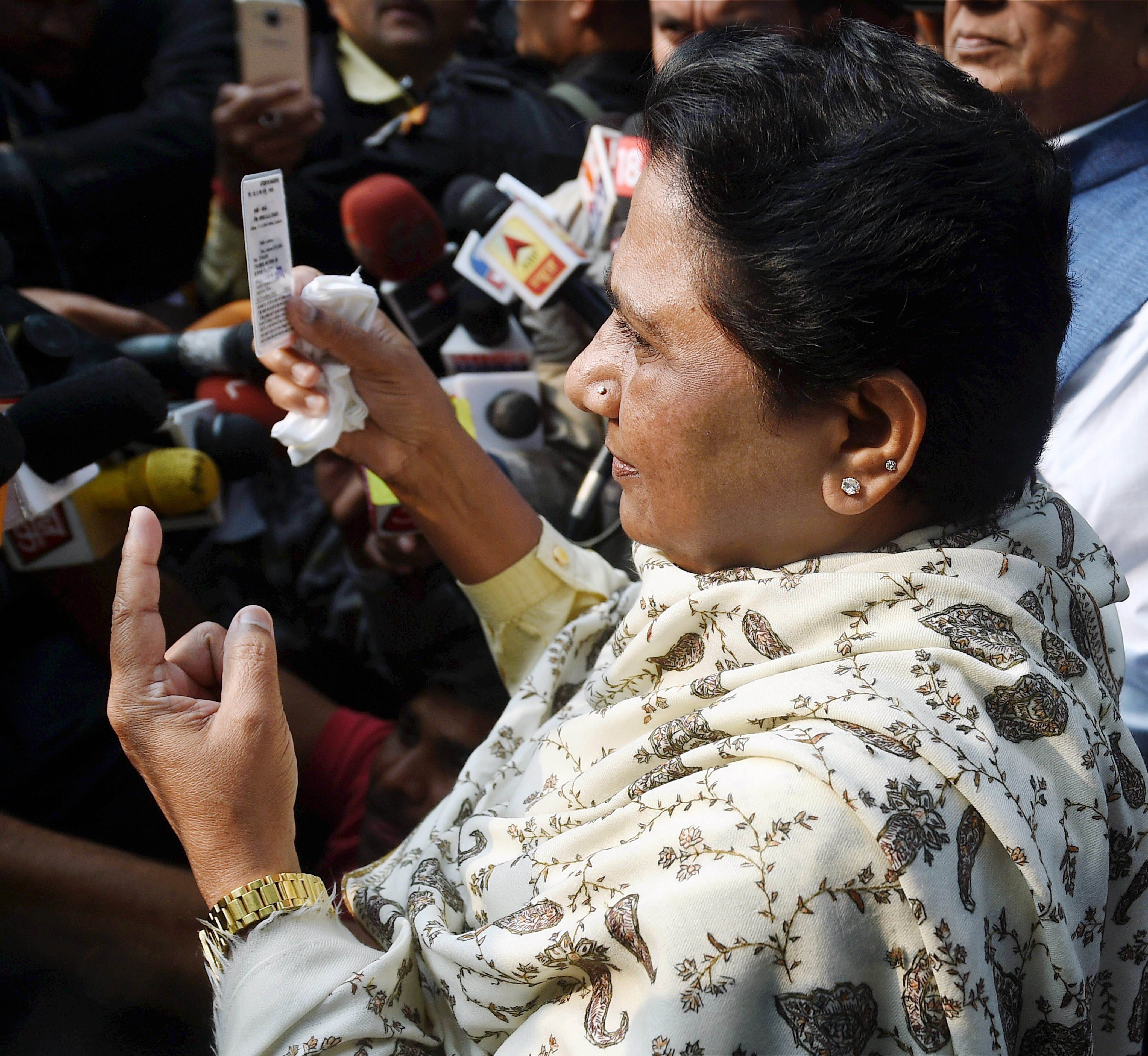 BSP leader Mayawati shows her inked finger after casting her vote in the third phase of the UP assembly elections in Lucknow on Sunday. Credit: PTI/Nand Kumar

Six months prior to the 2017 assembly elections, the battle for power in Uttar Pradesh was seen as a fight between the Bahujan Samaj Party (BSP) led by Mayawati and the Bhartiya Janata Party (BJP), which is presently ruling at the centre. The BJP’s chances had dwindled slightly after its state vice president Daya Shankar Singh made some inappropriate comments against Mayawati. At that point, the Samajwadi Party, the party currently in power, was widely perceived to be out of race.

All of a sudden, a series of melodramatic incidents within the SP’s ruling family catapulted Akhilesh Yadav from the status of ‘half CM’ to full chief minister and leader of the party. Earlier, he was often taunted to be subordinate to the SP’s big four: his father Mulayam Singh Yadav, uncle Shivpal Yadav, uncle Ram Gopal Yadav and senior leader Azam Khan. The impression formed that since Mulayam Singh was publicly taking the side of his brother Shivpal, party cadres would remain loyal to Shivpal if it came to choosing between him and Akhilesh. However, Akhilesh proved everybody wrong and now is the undisputed claimant to the chief ministership on behalf of the Samajwadi Party, with Shivpal and even Mulayam having been marginalised. The state witnessed a silent coup by a serving ruler who has been able to unshackle himself now.

There is a perception in the society that this was a drama masterly scripted and directed by Mulayam Singh to end all challenges to his son from within and outside the party and free him of the burden of anti-incumbency as well. There is no doubt that Akhilesh has emerged as a mature leader improving upon his ‘please all’ but weak image prior to the drama. The way in which the media gave the family controversy full coverage helped him compete with the hi-tech campaign of his opponents, especially the BJP.

Akhilesh Yadav started making public pronouncements even while the controversy was on that he would be able to win over 300 seats if he were to have an alliance with the Congress party, the fourth contender for power in the state. It is unusual for a bigger party to seek an alliance with a smaller party. Whether it was the strategist Prashant Kishore working behind the scenes or the understanding that an alliance would make it easier for Muslims to choose between the BSP and their alliance, Akhilesh Yadav and Rahul Gandhi finally joined hands and immediately found themselves well placed in the race for power.

The BJP now found itself relegated to third place in the calculus of most analysts and the question everyone was debating was who would finish first – the BSP or the SP-Congress alliance? It seems to me that the Muslims, on whom Rahul and Akhilesh were counting, have belied the hopes of the SP-Congress combine and chosen the BSP as their preferred instrument to decisively defeat BJP. Thanks to the divisions within the SP and the uncertainty over its poll strategy, many Muslims had already made up their mind to support BSP by the time the SP formed its alliance with the Congress. Mayawati has not spared any efforts to get Muslims to her side by reassuring them that she will not enter into an alliance with BJP at any cost and would rather sit in the opposition than help them form the government. In the event of the BSP falling short of a majority by some seats, then, it is quite likely that the Congress will break its alliance with the SP and offer support to it. Rahul Gandhi has already indicated that he respects Mayawati as the leader of Dalits.

The reason the BSP has an edge over the SP-Congress is the belief Muslims have that the SP did not do anything to prevent the 2013 communal riots in Muzaffarnagar. About 50,000 people, mostly Muslims, were displaced from their villages, many of whom have not been able to return.

Akhilesh Yadav failed to prevent communal and criminal incidents, some of them involving his ministers, and thus rule of law did not always prevail in his regime. He was, however, forthcoming in disbursement of compensation after these incidents occurred, earning him the mantle of  ‘compensation chief minister’. He overdid the act and also gave awards to people who were openly flouting important laws like the Right to Free and Compulsory Education of Children. The owner of the largest commercial chain of schools in Lucknow, City Montessori School, received honours from the state despite refusing admission to children from disadvantaged Valmiki community of sanitation workers on an official order. After 13 children from this community were admitted by a court order in 2015, the school refused to again admit 58 students in 2016.

On its part, the BJP is suffering from the impact of demonetisation. UP is not like the home state of the prime minister. In Gujarat, people may not have an option and tolerate any inconvenience. But people in UP were irritated by the ban on Rs. 500 and 1000 notes because of the inconvenience it caused them. Long queues and repeated visits to banks has been a humiliating experience for many. Moreover, the purpose of the exercise doesn’t seem to have been fulfilled.

Because of the listless performance of Akhilesh Yadav in Lucknow and Narendra Modi at the centre, it appears that voters in Uttar Pradesh are not averse to giving another chance to Mayawati. She did, after all, deal firmly with law and order and communal situations with a heavy hand in the past – something which goes in her favour at this point.