We appear to be living in a time when people have realised that if the dominant sense is whimsy, then they would be foolish to think any other way.

People crowd at a market next to railway station in central Mumbai January 16, 2015. The Reserve Bank of India surprised markets with a 25 basis point reduction in interest rates on Thursday and signaled it could cut further, amid signs of cooling inflation and what it said was a government commitment to contain the fiscal deficit. REUTERS/Danish Siddiqui (INDIA - Tags: BUSINESS SOCIETY) 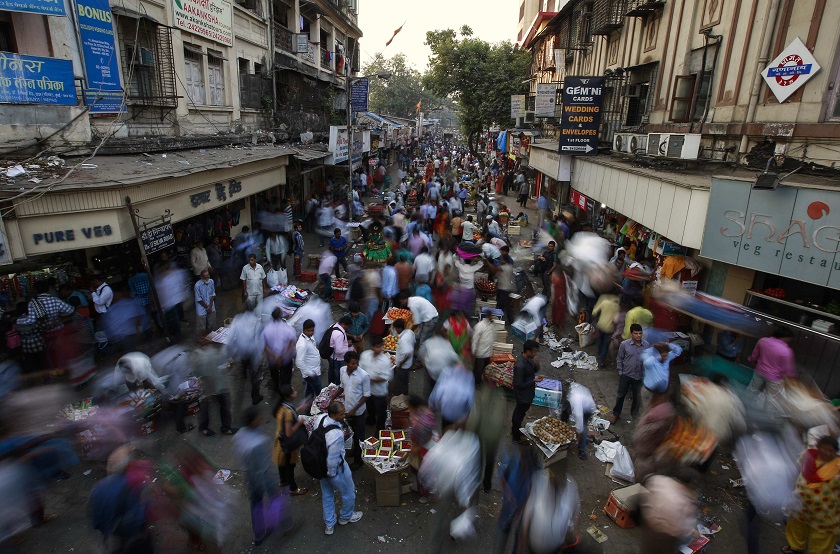 People crowd at a market next to railway station in central Mumbai. Credit: Reuters

In a basement near a gurudwara in an older part of Gurgaon, I am talking to two men whose lives typify the nature of frontier capitalism that drives the new city that encroaches upon the old and the new economies of aspirations, promise and rebuff that produce fluid lives and uncertain futures. The two men are from Mathura and came to Gurgaon two years ago to work as motorcycle taxi-drivers with a local company. They tell me that soon after the government announced demonetisation in November last year, the company bought a large number of motorcycles and distributed them to its newest employees. They were to pay around Rs 2,500 per month and were told that after two years the bikes would be theirs to keep. Jitender, the older of the two, tells me that the company bought the motorcycles in order to get rid of black money.

Soon after the drivers received their bikes, the Ola taxi company introduced its shared taxi scheme, which cost just Rs 49 per passenger. Jitender’s company then said it had become difficult to attract passengers for their motorcycles, as a result it had tied up with a major e-commerce entity and that the motorcycle drivers would now have to become couriers. Instead of carrying passengers, they were now to carry oversized backpacks with around 45 packages daily. Jitender said he refused to become a courier as he had signed up to be a bike-taxi driver. “If I am injured from carrying the heavy load the company has said that it would take no responsibility,” he said. Jitender and his friend are now unemployed, both quitting at the same time. As for the money they paid as installments towards the motorcycles, they were told that since there was no written contract, they would neither be refunded the money nor have any further claims on the vehicles.

Motorcycles that disappear without a trace and promises of a better life that dissolve in the murk of brutal accumulation strategies are part of the same world of vanishing braids of hair whose tales now string together scattered localities in North India.

It is, of course, tempting to suggest that narratives of malicious wandering spirits and magic belong to a realm that that is distant from the world of taxi and e-commerce companies. But hair loss is just a sign. The term ‘mass hysteria’ suggests that there is an informal economy of emotions that sits apart from the formal economies of the senses, which is the concern of governments and organised markets. But rumours and wild promises, social media and informal media, informal contracts and their catastrophic consequences are shared attributes of the apparently formal and informal, rather than what sets them apart. The women who claim that wanton spirits are entering their houses and lopping off braids of hair are not taking part in mass hysteria. They are actors in the normal drama of our times. The only difference is that their performances speak of their own stories.

Soon after the meeting with Jitender and his friend, I visited the residence of a trade union official in another part of Gurgaon. His wife is a grassroots worker for a pan-India women’s organisation. She tells me that some of the younger women from villages around Gurgaon, from where stories of braid-chopping have emerged, have been saying that they would like to sport short hair but that is not allowed in their community. Is it possible, she asks, that it began with women who thought that the tale of a mysterious spirit might be one way of getting their wish? She also tells me that in a context of rapid urbanisation, insecure working conditions and loss of livelihoods, many turn to local healers and tantriks for solutions. The latter suggest local remedies for global problems. But, she adds, in an environment where we are asked to believe that cow urine and droppings are solutions to life-threatening illnesses, why wouldn’t you think that magical spirits visit your households to add to your miseries? And if your future is made to vanish because you resist the attempt to transform from a taxi driver to a courier, then what kind of a rational present can you be expected to occupy?

The question isn’t really about an irrational India that constantly embarrasses a rational one. The one we need to ask is about the manner in which rational India – our political formations, judicial processes, educational institutions, corporate contexts and media discourse – has institutionalised inexplicable behaviour and actions as the norm. If trickery is all we have then those at the receiving end of it might be expected to use some of their own to make sense of the world.

However, notwithstanding the fact that milk-drinking idols and mysterious forces that turn sleeping humans to stone are pretty common fare in our part of the world, some important questions remain.

How does a spark become a conflagration? And how is it that a section of the population – women from traditional family backgrounds – seem eager to take part in a reality show of utterances and displays that seems out of character with their socialisation? It may well be that more than any other time in our history, a culture of national spectacles combines with barely submerged belief systems to produce society itself as a series of spectacular events. However, there is something specific about this culture of the spectacle and it undercuts notions of mass hysteria as it involves conscious acts, rather than hapless victims and automatons.

The Indian spectacle is not the same as French philosopher Guy Debord’s notion, that where appearances reign supreme, ‘authentic’ social life is undermined. For this perspective, like the idea of mass hysteria, only mystifies actual conditions of living and behaviour. The Indian spectacle is actual social life: the belief in spectacles is the consequence of witnessing actions and behaviours that are whimsical and yet receive official and social approval.

‘Mass hysteria’ suggests that people lose their senses. However, the spectacles we are witnessing suggest something else: that we are living in times when people have come to their senses and realise that if the dominant sense of our times is whimsy, then they would be foolish to think any other way. If it is easy to accept the actions of companies for whom human employees are rag-dolls to be flung around and educators who believe that all education is training for war by other means – and if these people are seen as sensible – then why condemn the hair-chopping brigade? The spectacle might actually be a clarifying mechanism. It allows us to more clearly view the irony of the labels ‘rational’ and ‘irrational’.  When Jose Luis Borges noted that history is very fond of irony, he might have actually have been thinking about India.

Sanjay Srivastava is professor of sociology at the Institute of Economic Growth.