Caught off guard by the stir suddenly turning violent, the BJP government in Maharashtra is now racing against time. 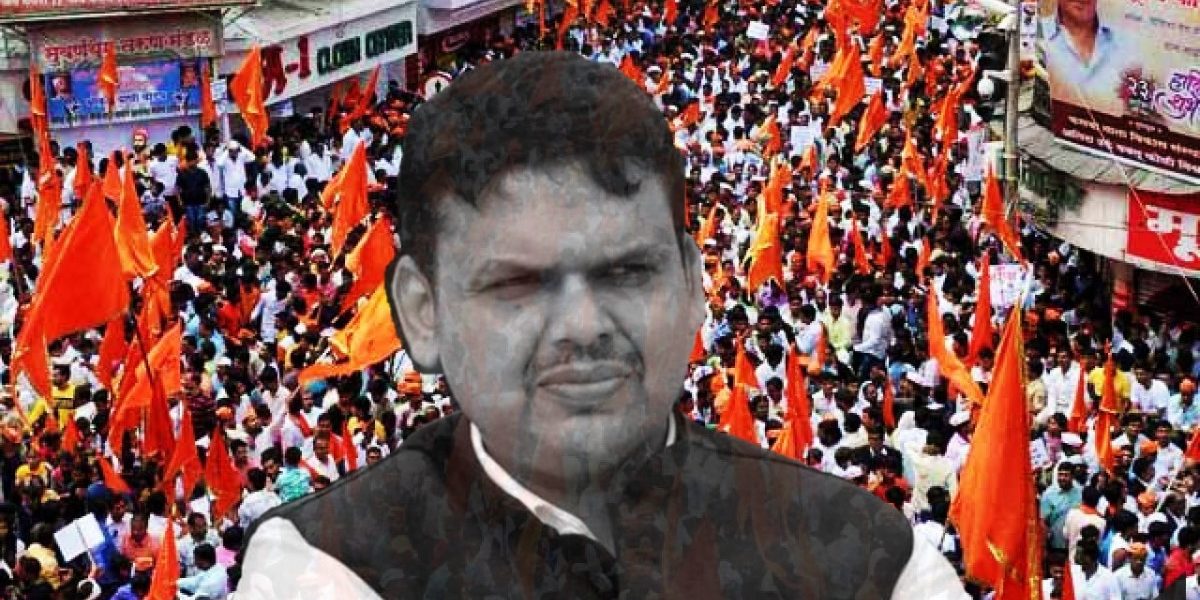 With the Lok Sabha and assembly polls not far away, the Maratha reservation issue could become the albatross around the neck of the Bharatiya Janata Party-led government in Maharashtra.

The agitation, which was peaceful, turned violent last week in the wake of a protestor in the Marathwada region committing suicide by jumping into the Godavari river. At least seven people have ended their lives so far, and the protests are continuing. The stir, with its epicentre in the backward region of Marathwada, is spreading to other areas. The agitators have also begun a ‘jail bharo’ protest in some parts, and neither an end to the agitation nor a resolution is in sight.

Marathas are not ordinary people. They are farmers and warriors, spread all over the state and constituting around 30% of the 11 crore population in the most prosperous state. In the Vidarbha region, they are known as Kunbis.

The community had earlier taken out silent marches across the state to highlight their demands, prominently the one for reservation. The massive marches had created quite some unease among other communities, including those in the OBC category, but they had remained silent for obvious reasons.

Marathas are not only the dominant community in Maharashtra, but are so powerful politically that they have called the shots in the state most times since its inception in 1960, and others have been willy-nilly forced to play second fiddle. The sugar cooperatives have helped spread their influence in rural areas, especially in western Maharashtra.

Caught off guard by the stir suddenly turning violent, beleaguered chief minister Devendra Fadnavis is now racing against time. Daggers have been drawn by his detractors and the chief minister is under attack from the Congress, Nationalist Congress Party and Shiv Sena, amid accusations that he was deliberately delaying a decision. Reports spoke of plans of a Maharashtra bandh being contemplated by community organisations on August 9, coinciding with the Martyrs’ Day.

The prime minister is silent, but the BJP high command is clearly worried. Party chief Amit Shah had flown to Mumbai only last week for detailed talks with RSS chief Mohan Bhagwat in the midst of the agitation. It is no secret that he is always on the hotline with the chief minister, who is suddenly appearing to be out of his depth, given the enormity of the situation.

Though parliament is in session, the volatile issue appears to have not got much attention in the Lok Sabha and Rajya Sabha.

In Maharashtra, what is more worrisome for the ruling BJP is that it has been isolated in all the turmoil. Former chief minister Narayan Rane is the only senior leader outside the ruling party who has been seen trying to help douse the fire, but to little effect.

An all-party meeting convened by the chief minister has been of little help, apparently in view of the fact that elections are fast approaching and every one wants to project themselves as the one with the interests of the Marathas at heart. It was but natural that Fadnavis became the favourite punching bag in this scenario.

The chief minister faces an unenviable task. The problem here is that time is of the essence, and the issue is complex. It is compounded by the fact that there is no one leader to talk to like Hardik Patel in Gujarat, who heads the Patidar agitation on the home turf of Prime Minister Narendra Modi.

The acid test is that the 16% reservation for the community agreed to by all sides should stand judicial scrutiny and the state government should be able to implement it before the next polls. To assuage the agitators, senior Maharashtra minister Chandrakant Patil has cautioned restraint on the part of the protestors, insisting that the decision will be implemented by the Fadnavis government in its present term.

Under fire from the opposition

It is a tall order. No one is in the mood to listen; no one has patience. They want to hit while the iron is hot. While Lok Sabha polls will be scheduled by May next year, the assembly polls are four months after that. Talk of the assembly polls being held with the Lok Sabha ones has suddenly evaporated into thin air.

Though the Fadnavis administration is putting up a brave front, the task ahead is difficult. There are many ifs and buts in any resolution on the issue. Reports have said that the state backward classes commission, which is looking into the demand, may require about three months to submit its report. Naturally, the government has to await this report before announcing its decision.

A special session of the Maharashtra legislature is being convened. But the session cannot be convened until the state government receives the report from the commission, which has received over 1.8 lakh representations reflecting the magnitude and sensitivity of the problem.

No political party is opposing the Maratha reservation, and it is a fact that they cannot afford to do so given the spread, reach and influence of the Marathas, numerically as well as politically. Most of the chief ministers of the state have been Marathas, and so have the ministers. The number of Maratha MLAs in the House of 288 seats has always been significant.

The BJP government is facing a devil and deep blue sea type situation. Reservation for the Marathas alone will create social imbalance, as some other communities like the Dhangars and Mahadeo Kolis have also been waiting a long time for quotas. The Dalits and OBCs need to be assured that their rights will not be affected in any way.

Maratha strongman Sharad Pawar has virtually added fuel to the fire by demanding an amendment to the constitution to include Marathas and some other communities in the quota by raising the limit of reservations from the present 50%. The NCP chief and former chief minister has promised to talk to other parties in parliament, in an apparent attempt to convince them of the need to raise the limit. BJP leaders in private have asked why Pawar failed to do so when the UPA was in power. Given the current mood, no one wants to antagonise the angry Marathas.

Violence in the agitation has turned into a serious challenge for the state government, as its detractors have started exploiting the situation to the hilt, with an obvious eye on the approaching elections. This is the first major crisis for the Fadnavis administration.

A sulking ally of the BJP, the Shiv Sena, has demanded that the chief minister be replaced. Opposition leaders insist that there is hardly anyone in the state government to defend the chief minister, as he has marginalised his colleagues and other state leaders to make himself feel safe and secure, politically.

A demand that has been considered before

The fact that the Marathas, who have been the ruling class in Maharashtra since the state’s inception in 1960, are demanding reservations tells the story of the decline in the fortunes of a section of the dominant community. There are “haves”, but the majority are “have nots”, as power and pelf has been enjoyed by the few who in a way became the creamy layer, and progress and development has bypassed the many.

This section, residing mainly in the countryside, has been hit hard due to a variety of problems including farm distress, growing fragmentation of land holdings, unremunerative agricultural prices and the failure to keep pace with the times in a society growing more technological by the day.

Union minister Ramdas Athawale is even advocating that the reservation limit be raised to 75% once and for all, so as to accommodate not only Marathas alone but others as well, including economically weaker sections of the Brahmin community.

The Shiv Sena is favouring a package involving reservations for the Maratha, Dhangar and Mahadeo Koli communities.

Raj Thackeray, who heads the Maharashtra Navnirman Sena, is attempting to revive the ‘son of soil’ card by pitching for jobs for the locals first.

When the Congress-NCP was in power, the state government had in 2014 introduced a 16% reservation for Marathas and a 5% reservation in education for economically-backward Muslims. In November that year, the high court had stayed the new quotas after a public interest litigation challenged their constitutional validity for exceeding a Supreme Court-imposed 50% cap on all reservations in the state. There is still a stay on that reservation, and the high court has to finally decide on the issue. The state, seeking to vacate the stay, had filed a 2,800-page affidavit including annexures with fresh data to justify reservations for Marathas. It relied significantly on higher farmer suicides among Marathas.

Experts say that the genesis of the demand for Maratha reservations is in the assurance given by the Congress-NCP in their joint manifesto in 2004, which spoke of reserving a certain percentage of seats in government jobs and educational institutions for economically weaker sections from the general category. Since the state backward classes commission gave an unfavourable report on the matter, the then Ashok Chavan government sent the issue back to the commission for reconsideration and review.

Ahead of the 2014 elections, the then Prithviraj Chavan government sought to take the sting out of the issue by referring the matter to a committee headed by Narayan Rane, which gave a favourable report. In light of the report, the government decided to give 16% reservation to the Marathas and even took out an ordinance on this. Along with that, a separate ordinance providing for 5% reservation to Muslims was also promulgated.

When the BJP-led government came to power in October 2014, it ensured passage of a Bill on reservations to the Marathas. This Bill was challenged in court and is now sub judice.

The fact that the chief minister is a Brahmin has provided an added dimension to the stir, as attempts to marginalise him politically had not succeeded so far and he will be completing four years in office in October.

While there is no silver lining for the state government so far, the BJP will have to resort to intense fire-fighting to calm the situation. This is a must if it wants to maintain its recently acquired number one position in the state amid a stiff challenge from the Congress and NCP, which are burying the hatchet for the ‘common good’. Shiv Sena, which was the ‘elder brother’ in the BJP-Sena alliance till the Modi wave made matters topsy-turvy, appears eager for some sweet revenge.