AAP claimed that BJP got Rohingyas and Bangladeshis 'illegally' settled in different parts of the country in the last eight years with the 'sole motive of triggering communal violence and riots'. 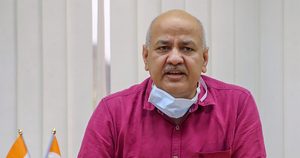 The Arvind Kejriwal-led party alleged that BJP got Rohingyas and Bangladeshis “illegally” settled in different parts of the country in the last eight years with the “sole motive of triggering communal violence and riots”.

Hours after the demolition of alleged illegal structures was carried out in riot-hit Jahangirpuri in Delhi, the Aam Aadmi Party (AAP) leader, Manish Sisodia, according to NDTV, said, “Demolish the houses of those leaders as well. The BJP should say when their houses will be bulldozed.” He also described the bulldozing in Jahangirpuri as “drama”.

He added that “houses of leaders who took bribes for 15 years and allowed these structures to come up” should be pulled down first, targeting the BJP. The civic bodies in Delhi have been under the control of the BJP for more than a decade.

Sisodia said, “The BJP has created an atmosphere of anarchy in the country. You will get to know where the next riot will take place if the BJP gives a list of the areas where it has got Rohingyas and Bangladeshis settled illegally,” he told reporters on Wednesday.

According to AAP, BJP leaders and officials of the saffron party-ruled civic bodies in Delhi got Rohingyas and Bangladeshis “illegally” settled in the national capital over the last 15 years.

Nine bulldozers reached Jahangirpuri early on Wednesday morning, based on the directions of BJP-ruled North Delhi Municipal Corporation (NDMC), to demolish “encroachments”. The Muslim-majority area witnessed violent clashes on Saturday, April 16, during a Shobha Yatra on the occasion of Hanuman Jayanti.

The pulling down of houses’ of the “rioters”, after being described as “illegal/unauthorised structures”, has been witnessed recently across Uttar Pradesh, Madhya Pradesh, Gujarat and now in Delhi, in the aftermath of communal clashes.

Shortly after demolition began in Jahangirpuri on Wednesday morning, the Supreme Court was petitioned by lawyer Dushyant Dave and Congress leader Kapil Sibal to stop the demolition. The court then passed an order to maintain the status quo, in effect ordering the authorities to stop the demolition until the matter is heard on Thursday.

Lashing out at the BJP, Sisodia said, “AAP’s stand is that the BJP is responsible for unrest in the country. We need to run bulldozers at BJP headquarters to end goondagardi (hooliganism)”. He said the discourse being set for the country by the BJP was that of “goondai (hooliganism)” and not health, education or IT (information technology).

Atishi, another party leader, claimed that the BJP has “settled Bangladeshis and Rohingyas across the country to cause riots”.

“The BJP is saying violence, riots and hooliganism will stop by running bulldozers and removing encroachments. But actually, the BJP itself is engineering hooliganism, violence and riots not just in Delhi, but across the country,” Atishi said in a video message.

“The home minister is himself orchestrating these riots. If you want to use the bulldozer, use it to demolish the home minister’s house. That’s how riots will stop,” Chadha said.

The demolition in the Jahangirpuri area took place a day after Delhi BJP chief Adesh Gupta had written to the NDMC mayor, asking him to identify illegal constructions of “rioters” in the area and demolish them using bulldozers.

The two parties have also traded charges on the political allegiance of one of the alleged main conspirators of the communal violence.