A roundup of news this week from the Northeast.

The list of allegations against the Manipur University VC put up near the varsity gate. Photo by special arrangement

MU, the state’s only central university, has 76 colleges affiliated to it. The strike, going on since May 31, demanding removal of vice chancellor A.P. Pandey on multiple charges of financial and administrative bungling, has led to the suspension of the semester examinations slated to begin in early June. The issue has seized wide public attention in the state with the students calling bandhs demanding that the MHRD and the state government look into the matter urgently. Police baton charge on the protesting students was severely criticised by the public, forcing the state administration to look for a solution to end the impasse.

As per the memorandum of agreement, signed in Imphal, the MUSU has agreed to “temporarily suspend” the agitation following a decision to reconstitute the fact-finding team to look into the allegations it brought against the VC. The new team, which would replace the committee comprising a member each of the University Grants Commission and the ministry as per the July 12 decision of MHRD, would have a retired vice chancellor who is yet to be named. It would be chaired by the former acting chief justice of Meghalaya high court, T. Nandakumar Singh. The agreement said, “During the period of inquiry and until follow up action taken on the inquiry report by the competent authority, preferably within a period of 15 days, Prof. A.P. Pandey will be on leave”. It said the university registrar “shall be the nodal officer for the enquiry committee”.

As per the agreement, reached after three days of talks beginning on August 14, both MUTA and Manipur University Staff Association (MUSA), supporting the student’s agitation, have also agreed to the conditions. Representatives of these associations were present at the signing of the agreement besides the state chief secretary, joint secretary at the MHRD G.S. Hosur among others. The meeting was chaired by the state chief minister N. Biren Singh.

Sikkim: Centre proceeds towards increasing number of assembly seats from 32 to 40 in run-up to state elections

The Union home ministry has proceeded towards increasing the number of assembly seats in Sikkim from 32 to 40 by placing it before the Union cabinet recently for approval. 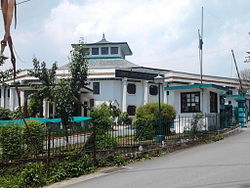 If approved and thereafter receives Presidential assent or a vote from the Parliament, five of the eight increased assembly seats would be reserved for the Limboo-Tamang community for the first time. The rest of the three seats would likely go to the general category, raising its number to 20 from 17.

Though the Delimitation Commission rules of 2002 reportedly states a change in the number of assembly seats only after the first census after 2026, the change could be made for Sikkim because of its special constitutional status.

As per the suggestions sought by the Union home ministry in May 2017, the existing reserved seats for Bhutia-Lepchas and Sangha (for monks) at 12 and one respectively, and for the Scheduled Castes at two, would remain.

The home ministry’s May 2017 suggestion was triggered by a Supreme Court order to look into the matter in response to a petition filed by the Limboo-Tamang community, a scheduled tribe of the state, in 2016 seeking political representation in the state assembly through reservation.

While the ruling Sikkim Democratic Front (SDF) is for increasing the number of seats, the other political parties of the state had suggested setting aside a few seats from the 17 seats meant for non-tribals or general category. However, chief minister Pawan Chamling reportedly opposed the idea on the argument that 60% of the state’s population is presently non-tribal and it would be an injustice to them if their seats were reduced.

Prior to the state joining the Indian union in 1975, the national assembly under the Choyal dynasty had 15 seats reserved for the Bhutia Lepchas and the rest of the 15 for the Nepali community.

The home ministry’s recent move has come at a time when only a few months are left for the assembly elections in the state. If approved, this increase of seats would add a new dynamics to the 2019 elections where Chamling will go to the polls for the sixth term and ally BJP is looking at opening its account in the state. Though BJP launched 13 candidates in the 2014 elections, none could win. While SDF bagged 22 seats, the rest of the 20 went to Sikkim Krantikari Morcha (SKM).

The powerful All Arunachal Pradesh Students Union (AAPSU) has begun a drive against violation of Inner Line Permit (ILP) in the state in response to the ongoing update process of the National Register of Citizens (NRC) in neighbouring Assam.

AAPSU, which began the drive across the state on August 17, told local reporters that the drive, named Operation Clean Drive, was meant to check “illegal migrants” residing in the state by violating the ILP provisions, mandatory to enter the state, and not to harass genuine Indian citizens.

Prior to starting the drive, the AAPSU leaders had a consultation with the leaders of All Assam Students Union (AASU) and said to have received its support for it. AAPSU said no indigenous people of Assam, across religion, would be harassed due to the drive.

As per local news reports, on the first day of the drive, AAPSU leaders handed over 134 people without ILP to the police, following which they were sent out of the state. A report in the Arunachal Times, describing the student body’s policing in the state said, “On Friday afternoon, several members of the AAPSU with identity tags were seen checking every passing vehicle on the capital’s highway near the Raj Bhavan tri-junction. There was no police presence as the students went about their checking. It appeared that the state government had temporarily handed over its job to the AAPSU. However, later in the afternoon, the police were seen checking ILPs as the students stood by.” 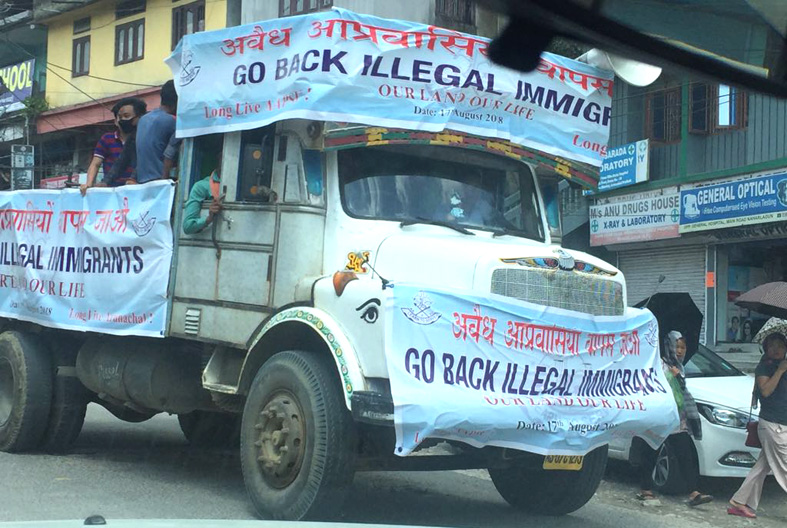 AAPSU drive at Naharlagun in Arunachal Pradesh on August 17. Photo courtesy of The Arunachal Times

Prior to the drive, Itanagar superintendent of police M. Harsha Vardhan said any attempt to take law into their hands “would be dealt with strictly.”

In July end, when the student body announced to the media its plan to start the drive, it urged “all genuine Indian citizens” to get ILP issued within 15 days’ time in order to save themselves from facing any harassment during the drive. It also warned “illegal migrants” without documents to leave the state at once.

This drive against “illegal migrants” is seen after the recent reports of a similar drive being carried out by the Khasi Students Union at the Assam-Meghalaya border. The motive behind these drives is based on their premise that many “illegal immigrants” who found their names outside of the final draft NRC in Assam would try to sneak into their states.