Amid Karnataka Drama, a Reminder That One BJP MLA in Manipur Never Quit Congress 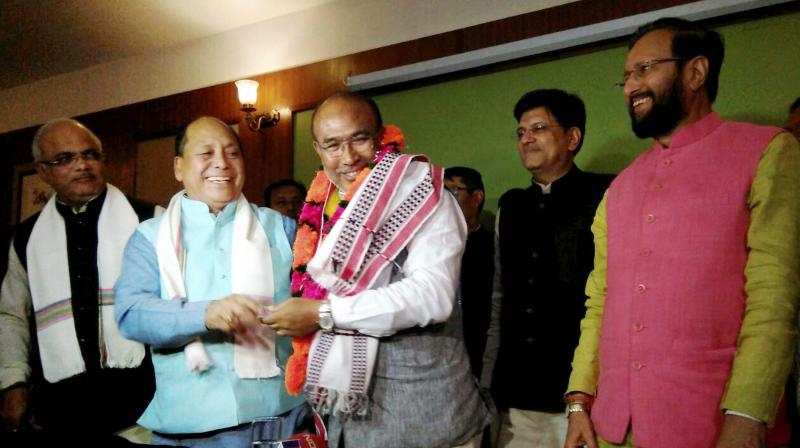 N. Biren Singh after he was elected the leader of the BJP's legislative party. Credit:PTI

New Delhi: Even as the political developments in Karnataka have caught the attention of many across the country, with the national media following every development to the last detail, what has been happening in Manipur to keep the first BJP-led government in the state steady is largely missing from the mainstream narrative.

In the two-phased March 4 and 8, 2017 assembly elections in Manipur, the BJP, with 21 seats, came second to the then ruling Congress, which bagged 28 – three short of the majority mark to form a government.

In spite of coming second in the electoral race, the BJP famously formed a government with support from its regional allies, the Naga People’s Front (NPF) and the National People’s Party (NPP). However, together with NPF and NPP’s four seats each, and with support from the lone LJP candidate Karan Shyam, the BJP could only reach 30 – one short of the majority mark in the 60-member assembly.

To get one more MLA to support a BJP government, the party did what was unprecedented in not just the electoral history of Manipur but perhaps the country itself. It poached a Congress MLA – Thounaojam Shyamkumar Singh – to fit the arithmetic. Without even resigning from the party, Shyamkumar was seen accompanying the BJP MLAs to Raj Bhavan to stake claim to form the government.

Shyamkumar, who contested the Andro seat on a Congress ticket, was rewarded by the N. Biren Singh government with a cabinet minister’s post. BJP leader and governor Najma Heptulla conducted his swearing-in despite the fact that he had violated the Tenth Schedule of the constitution. Shyamkumar is presently the state PDS and consumer affairs, weights and measures, revenue, relief and rehabilitation minister.

On March 15 morning, the state Congress handed him a show cause notice immediately after he was sworn in, which he reportedly ignored. It led the party to expel him in after he was sworn in that day itself, for six years. Meanwhile, independent MLA Ashab Uddin, who curiously went missing on March 12, presented himself at the assembly on the day of the floor test (March 15).

“This is probably the first time in the political history of India that an MLA-elect of an opposition party has defected and joined the ruling coalition government directly as a minister,” Manipur Pradesh Congress Committee (MPCC) president T.N. Haokip then told local reporters in Imphal.

“The Congress thereafter lodged a complaint against him at the Speaker’s court, seeking his disqualification under the anti-defection law. However, both the speaker (Yumnam Khemchand) and the deputy speaker (Kongkham Robindro) are from the BJP and they refused to take action against Shyamkumar,” related Rajkumar Imo Singh, Congress MLA and MPCC general secretary (administration).

“Since two-three months had passed and no action had been taken against him, the party filed a case at the Manipur high court seeking his disqualification. However, nothing has happened since and Shyamkumar continues to be in the BJP even after winning the elections on a Congress ticket,” Imo Singh told The Wire from Imphal.

In the course of time, what has happened is a further violation of the Tenth Schedule. Till date, as many as eight other Congress MLAs have shifted allegiance to the BJP without resigning from their constituencies won on Congress tickets. They are Ginsuanhao Zou (Singhat), Ngamthang Haokip (Saitu), Thokchom Lokeshwar Singh (Khundrakpam, though he is yet to formally join the BJP, unlike the others), Paonam Brojen (Wangjing Tentha), Yengkhom Surachandra Singh (Kakching), Oinam Lukhoi Singh (Wangoi), Sanasam Bira Singh (Kumbi) and Kshetrimayum Biren Singh (Lamlai).

These MLAs have joined the BJP in public functions, even though it was in violation of the constitution. Presently, if you count these MLAs, the BJP’s tally has risen from 21 to 30, depleting the Congress’s strength from 28 to 19. With the lone independent MLA, LJP MLA as well as Trinamool Congress MLA, Tongbram Robindro Singh, by its side, the BJP has cobbled up one more than the magic figure of 32 on its own – that is, if you don’t take the anti-defection law into account.

“What is interesting is that though these MLAs have become part of the BJP without resigning from the Congress when the assembly is in session, they don’t sit in the treasury benches but with the opposition – just to avoid the anti-defection law. It is not only unprecedented in Manipur but completely bizarre and a violation of the constitution,” pointed out Laba Yambem, veteran Imphal-based journalist and a close watcher of the state politics for over three decades.

This gradual erosion of legislators from other parties, legally or otherwise, has, however, made the two regional partners of the BJP government – the NPF and the NPP – less influential. Its impact was seen in the recent Nagaland assembly polls when both the NPP and the NPF, wanting to be a part of the government in that state, threatened to pull out of the Manipur government if BJP set them aside to go with the newly-formed Nationalist Democratic People’s Party (NDPP). The BJP could afford to ignore those threats, and even pull out of the long alliance it had with the NPF in Nagaland, because of these defections. 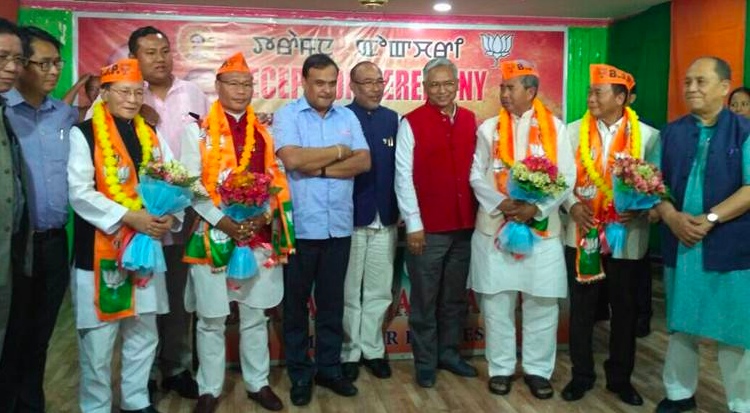 Four Congress MLAs joining the BJP in the presence of chief minister Biren Singh and NEDA convenor Himanta Biswa Sarma in Imphal. These MLAs continue to hold their seat in violation of the Tenth Schedule. Credit: Twitter

This past March, though, the Congress raised the issue of defection in violation of the Tenth Schedule in the state assembly. It was done in response to the disqualification of 20 MLAs of the Aam Aadmi Party on the charge of holding an office of profit. The members even produced a letter written by the BJP to the governor listing the names of the MLAs supporting N. Biren Singh where Shyamkumar was marked as the Congress MLA.

Former deputy chief minister and Congress leader Gaikhangam Gangmei reportedly said he wrote about it to the assembly speaker and also to the president of India, but has failed to get any response.

“I feel the Congress state leadership should have already taken up the case of the disqualification of the eight other MLAs too. Many of them are holding certain political positions from the BJP too, such as chairman of certain concerns, etc. This way, very soon, the anti-defection law will not be applicable to these MLAs if they manage to become two-thirds strength,” said Imo Singh, two time MLA from Sagolband constituency in the Imphal district.

Looking at the possibility of the ‘Manipur model’ of government formation of the BJP in Karnataka, Yambem said, “I don’t think this would be employed in Karnataka simply because there is a lot of media attention, which has not been the case in Manipur. So you can do what you want to do even if it goes against the constitutional norms.”

Some local reporters said, on the condition of anonymity, that the local coverage of the BJP engineering defections, primarily in the Congress in violation of the Tenth Schedule, is less “also because chief minister Biren Singh’s person-to-person contact among some editors as he was a former journalist too.”

(The story has been updated with additional information.)