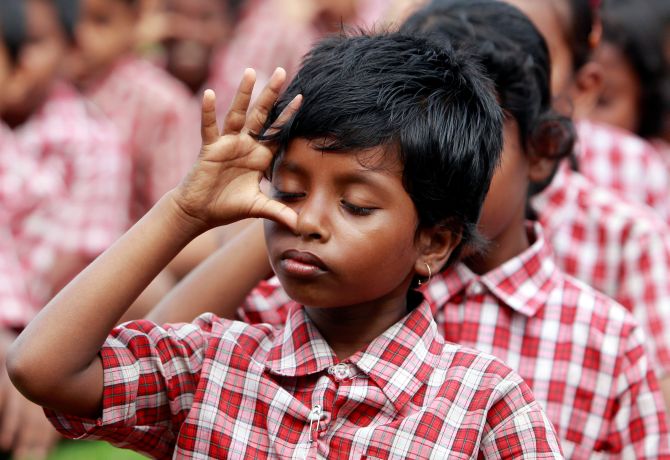 The muslim community has decided to take legal action against the civic body if it does not withdraw the proposal. Credit: Reuters/Jayanta Dey

The Shiv Sena-BJP ruled Brihanmumbai Municipal Corporation’s (BMC) approval of a proposal making yoga and Surya Namaskar mandatory in civic schools in Mumbai, has been widely criticised by opposition parties as well as by Mumbai’s Muslim community, which dubbed the move as a ploy to “saffronise” education.

According to The Asian Age, the community believes that Surya Namaskar is traditionally a ‘Hindu form of worship’ and it is against the tenets of Islam to bow down to any entity apart from Allah.’

“Many Muslims find Surya Namaskar objectionable since Islam forbids bowing before or worship of anyone except God,” the statement read.

The BJP, on its part, claims that Surya Namaskar is beneficial in leading a healthy life, improves concentration and has nothing to do with any religion.

The All India Ulema Council has approached Samajwadi Party leader Rais Shaikh to decide the community’s future course of action in this regard.

Shaikh has on his part decided to inform the BMC to withdraw the proposal within seven days, following which he will move court against the corporation.

“I will consult my lawyer and send the municipal commissioner a notice giving the BMC a seven-day period to withdraw the decision. If, within that time, we do not get a written reply stating that the decision is withdrawn, I will take legal recourse,” he said.

Shaikh termed the proposal as a ‘pre-election move’ and an attempt by the BJP to hog the limelight. He claimed it is a part of the RSS agenda of cultural penetration and said that if BMC makes it compulsory, Muslim parents would stop sending their children to schools.

Defending the move, according to the Times of India, the BJP corporator Dilip Patel said, “Yoga is internationally accepted as the best exercise. Bringing it into the religious ambit is a political tactic by the opposition.”

Maulana Mehmood Daria Badi, the general secretary of the All India Ulema Council, however, said, “The civic body claims this will elevate the status of education in our schools. But how is this going to benefit education? If they are talking about physical fitness, there are PT [physical training] periods, why is Surya Namaskar necessary? Our entire community will oppose the decision and we will take Rais Shaikh’s help to decide our future course of action.”

The proposal passed by the house of the civic body, will now be sent to municipal commissioner Ajoy Mehta, who will take a final call on the matter.