About 25 crore people are expected to take part in the call against privatisation, anti-labour policies, campus violence and the Citizenship Amendment Act. 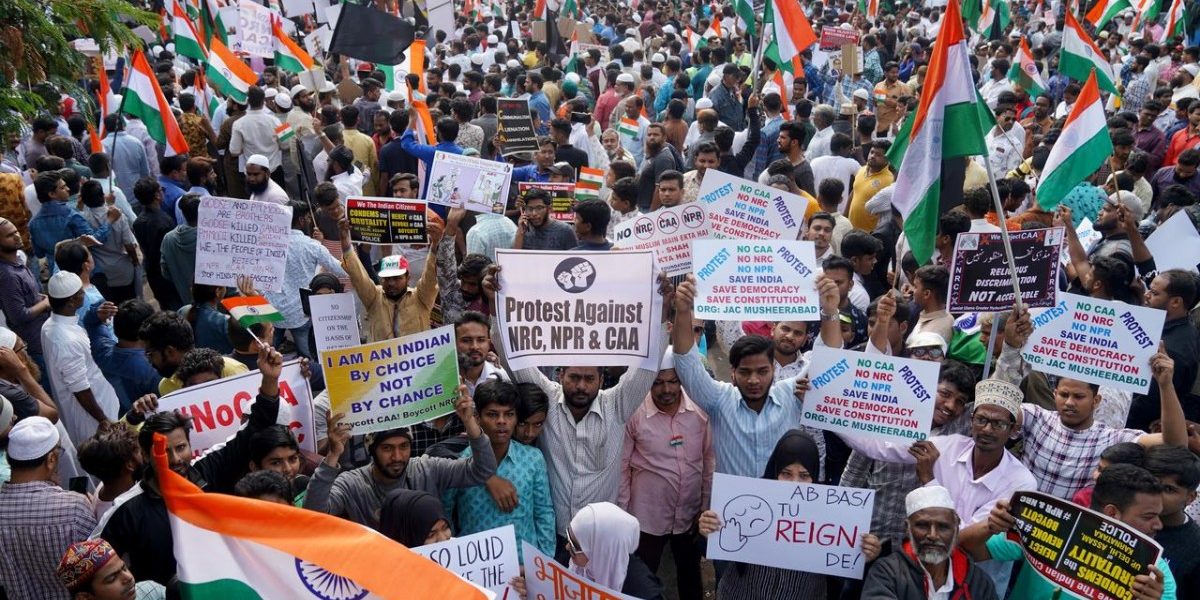 Demonstrators hold placards and flags as they attend a protest rally against a new citizenship law, in Hyderabad, January 4, 2020. Photo: Reuters/Vinod Babu

New Delhi: An estimated 25 crore people are participating in the nationwide strike called by ten central trade unions on Wednesday against the “anti-people” policies of the Central government.

While political parties in some states, such as the Congress in Odisha, have supported the move, others like the Trinamool Congress in West Bengal have distanced themselves from the bandh. The protest is also against the recently enacted Citizenship (Amendment) Act (CAA).

The “bandh” will be imposed as part of a declaration adopted by several trade unions including INTUC, AITUC, HMS, CITU, AIUTUC, TUCC, SEWA, AICCTU, LPF, UTUC and other other federations and associations in September 2019.

Amarjeet Kaur, general secretary of the AITUC said that reports are coming in from across India of people participating in the strike. “BHEL workers have gone on strike, unions are on strike. There is situation of bandh in the northeast, Odisha, Pondicherry, Kerala and Maharashtra. Roadways depots are closed in Haryana,” she said.

In Delhi even rains will not impact on the movement as workers’ processions will be taken out in industrial areas of the state; and as planned, workers will assemble at the ITO and take out a procession.

The protest is against rising prices, sale of the public sector (firms), 100% FDI in railways, defence, coal, pharma, animal husbandry, security services, and the codification of 44 (Central labour) laws.

The demands also include a minimum pension of Rs 6,000 for everyone, minimum support price (MSP) for farmers, adequate supply of ration to people, she said, adding that the demands concern common man’s issues besides worker-centric issues.

Road and rail blockades were reported from several parts of West Bengal on Wednesday as trade union activists along with Left and Congress supporters picketed in support of the 24-hour general strike against the Centre’s “anti-people” policies.

The strikers took out rallies in parts of the state and blocked roads and railway tracks in North 24 Parganas district. But police removed them to ensure movement of vehicles without hitch.

In Kolkata, government buses were plying normally but the number of private buses was less in the early hours. Metro services were normal in the city and auto-rickshaws and taxis were also seen on the roads.

Heavy police deployment was seen in several areas of the city, including in Tollygunge, Behala, Esplanade and Jadavpur.

In some areas of north Bengal, the Trinamool Congress took out rallies opposing the strike and urged people to maintain normalcy.

Banking services to be affected

The strike is also expected to hit banking services in a big way since the All India Bank Officers Confederation has issued a circular urging members to not demand or accept any keys on day of the protest. It has also urged them to not perform any clerical duties.

Though State Bank of India said it expected minimal impact on banking operations, it is widely believed that these, along with ATM transactions, could be effected as a large number of bank unions are joining the protest to express solidarity with their protest. Bank unions are also joining in as they are demanding a five-day week as well as a pay hike.

The transport sector is also expected to get hit by the strike as a number of auto, taxi and bus unions are affiliated to these central trade unions.

A protest against ‘anti-people, anti-national policies’

The decision on the planned protest was conveyed through a joint statement by these groups. The 10 central trade unions said a purpose of the strike is also to seek reversal of the “anti-working class, anti-people and the anti-national policies” of the government. It claimed that the Union labour ministry did not assure the workers that their demands would be met and this led to the decision to go ahead with the protest.

The CTUs also accused the government of not having the right kind of attitude towards the workers. The trade organisations also charged that no Indian labour conference has been organised by the government since July 2015. They also opposed the codification of labour laws and criticised the Centre for the prevailing economic slowdown and rising unemployment.

They also spoke out against moves for privatisation of more public sector undertakings. The CTUs said already 12 airports have been sold to private players and government is planning to sell its entire stake in Air India. They said a decision on divesting government stake in BPCL was also being taken while the BSNL-MTNL merger is now known to all.

The unions also alleged that under the garb of Voluntary Retirement Scheme (VRS), 93,600 telecom workers have been ousted from the sector.

Apart from opposing privatisation of PSUs, the trade unions are also opposing the privatisation in railways, corporatisation of 49 defence production units and forced merger of banks. It is also expected that more than 175 farmers and agricultural worker unions will extend support to the demands pressed by workers’ unions.

These organisations have also accused the Centre of allowing commercialisation of education and arbitrary fee hike by various institutions. As such, they said 60 students’ organisations and elected representatives of some universities would also be taking part in the strike.

The strike has also received the support of those opposed to the violence on JNU campus and other incidents of violence in universities across the country. The CTUs also criticised all such acts.

The bandh call has also received support from political parties in some states. In Odisha, the state unit of the Congress has decided to support it. Its president Niranjan Patnaik appealed to the workers and office-bearers of the party to participate in the bandh in large numbers.

However, in West Bengal, CM Mamata Banerjee opposed the move. “There are other means to protest and highlight demands,” she said.

Opposing the call by mostly Congress and Left-affiliated unions, she said there would be no strike in her state. “I will not allow any bandh in my state,” she said.

Note: This article was first published at 5 pm on January 7 and updated at 11:30 am on January 8.