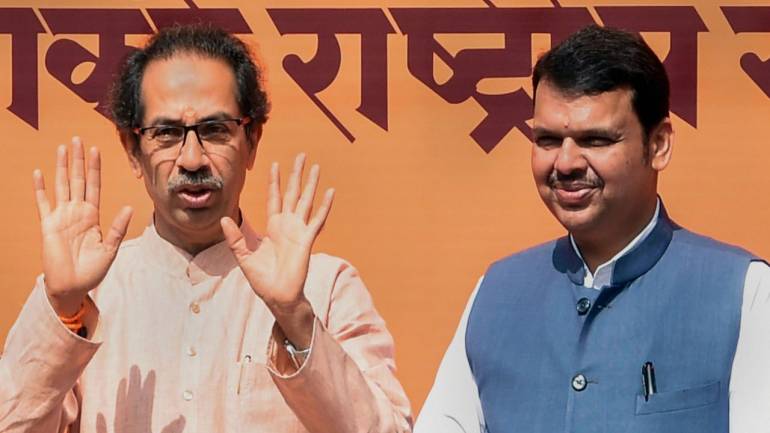 Mumbai: The ruling Bhartiya Janata Party has won 105 of the total 150 seats it has contested on. Shiv Sena, which is contesting on 124 seats, has won 56. With a victory in 161 seats, the two parties who are in an alliance are on course to retain power in the state.

The Congress-NCP has 98. NCP, which contested in fewer seats than Congress, won 10 more than its ally, thanks largely to Sharad Pawar’s enduring ability to draw votes. Congress won 44 seats in Maharashtra, and NCP, 54.

These numbers suggest that the Sena will no longer be willing to pay second fiddle to the BJP in the state. Indeed, reminding BJP of the 50:50 sharing pact that Amit Shah engineered before the election, Shiv Sena chief Uddhav Thackeray has demanded the chief minister’s post for his party on a rotational basis. Speaking to the media in Mumbai, Thackeray said, “I have been accommodating during Lok Sabha elections, but I can’t keep doing that anymore. I have a certain responsibility towards my party too and have to ensure my party flourishes,” he said. Thackeray, however, remained steadfast in the promise that Sena would ally with BJP.

Asked about the possibility of the Shiv Sena embracing the NCP and Congress to form government, Shiv Sena leader Sanjay Raut had said, “No, we fought the polls in alliance with the BJP. We will go ahead with the tie-up. There will be no change in the predecided 50-50 formula.”

He said Shiv Sena president Uddhav Thackeray and chief minister Devendra Fadnavis will hold talks on implementing the formula. On the Congress and NCP collectively fairing better than the 2014 polls in the state, Raut said the opposition also needs to be strong in a democracy.

He noted that NCP chief Sharad Pawar “using his experience” and fanning parts of the state also gave some success to the opposition party. “But we are also winning seats in good number,” the Rajya Sabha member added.

Uddhav’s son Aaditya won a whopping 69.14% of votes from Worli constituency in Mumbai, and is the first ever from the family to have participated in an election. Uddhav has told reporters that he is proud of his son. “We are proud of Aaditya’s win. But most importantly are grateful to people for their love and hope that they would continue to love him in the future too,” he added.

Several prominent position holders in the Fadnavis government have lost their seats. While Shiv Sena’s Vijay Shivtare lost the Purandar seat to Congress’s Sanjay Jagtap by over 30,000 votes, the Sena’s Arjun Khotkar from the Jalna seat lost to Congress’s Gorantyal Kisarnrao by over 20,000 votes.

Shivtare is at present water resources, water conservation and parliamentary affairs minister and Khotkar handles the textiles, animal husbandry, dairy development and fisheries departments. Ram Shinde, a BJP strongman who has won from the Karjat Jamkhed seat for the past 25 years, lost his seat to NCP’s Rohit Pawar. Rohit is one of the star candidates of the NCP and the grandson of party chief Sharad Pawar’s late elder brother, Appasaheb.

Bala Bhegade, a BJP minister, has lost by a 56,000+ margin to Congress’s Sunil Shelke.

Women and child development minister Pankaja Munde lost to her cousin and NCP candidate Dhananjay Munde by over 30,000 votes.

The opposition parties Congress and Nationalist Congress Party are going strong on their core constituencies. They are leading in 44 and 54 seats respectively.

The newly floated Vanchit Bahujan Aghadi has won one, and the Samajwadi Party, two. Eleven independent candidates have also won.

Of the total 110 seats it contested, Raj Thackeray’s Maharashtra Navnirman Sena managed to bag only one. The party’s candidate Pramod Patil won from the Kalyan Rural constituency, defeating Shiv Sena’s Ramesh Mhatre by a margin of 6,000 votes.

MNS chief Raj Thackeray had kept away from the Lok Sabha elections but had extensively campaigned against the BJP. He had acted as a “fact-checker”, busting claims made by the ruling BJP and urging voters to vote rationally and against the BJP. Known for his oratory skills, Thackeray’s charisma, however, failed to make an impact in the state assembly polls.

In the 2009 assembly elections, the party had faired relatively, better winning 13 seats. In 2014, it won just one. Thackeray left the family-headed Shiv Sena party in 2006 and floated his own MNS.

Chief minister Devendra Fadnavis survived a brief scare – he was lagging in the early hours – but soon got back into a leading position in Nagpur South West. His lead, however, has been marginal.

In Western Maharashtra, which is considered to be an NCP bastion, NCP and BJP are fighting neck-and-neck. The trends have remained volatile. Former deputy chief minister Ajit Pawar beat his BJP rival Gopichand Padalkar by polling 83.24% of the votes in Baramati.

Tight security, with over 2,00,000 police personnel, has been deployed across the counting centres in the state. The opposition Congress, NCP and some other parties have been complaining of malfunctioning and “tampering” of EVMs at some constituencies.

Former BJP MLA Anil Gote, the independent candidate from Maharashtra’s Dhule assembly seat, spent the night outside the EVM strong room in his constituency, claiming he was guarding the facility to avoid any misuse of the voting machines.

Find out about the key players in the mix here. 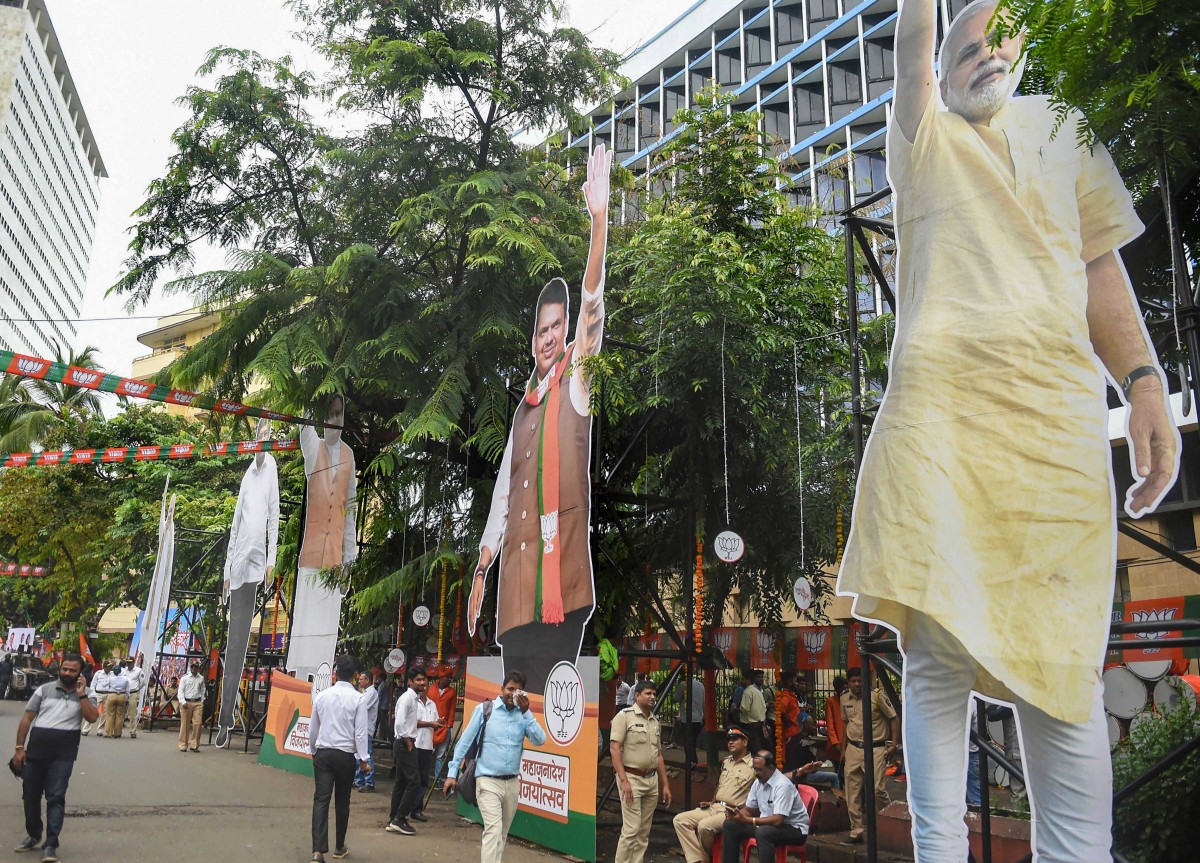 Preparations outside the BJP office on Thursday. Photo: PTI

Voter turnout in the state has been only 60.50%, lower than the last 2014 assembly elections, when over 63.08% of voters had turned up. The highest turnout was reported in Karvir constituency in Kolhapur, at 82.15% and the lowest was recorded in south Mumbai’s Colaba area at 37.43%. Rural regions of the state fared better than the cities.

The ruling party, however, seems unperturbed by the relatively low turnout. Exit polls, too, have indicated a comeback for the BJP and Shiv Sena in the state.

Almost all exit polls indicated a comfortable win for the BJP-Sena with the former projected to win as many as 120 seats. Devendra Fadnavis has been pitched as the chief ministerial candidate once again if the saffron alliance wins and the Sena has demanded a deputy chief minister’s position.

This election, unlike other assembly polls, was not fought on either local or state issues but on rhetorical ones like national security and Kashmir. The state, although, has been grappling with its own list of pressing problems, presented by drought, unemployment and farmers distress. However, those found little mention in BJP’s pitched campaigns.

The opposition, on the other hand, struggled to stay relevant and most of its past months were spent in controlling the damage caused by BJP and Sena’s massive poaching exercise. Several prominent leaders from both the Congress and the Nationalist Congress Party (NCP) switched over to the BJP and Sena just days before the polls.

In 2014, the four major political parties — BJP, Sena, Congress and NCP — had all contested separately and had formed their respective alliances after the polls.

Besides the two big alliances, the new entrant in the fray this time was veteran leader Prakash Ambedkar’s Vanchit Bajuan Aghadi. The newly floated party contested on as many as 280 seats. Exit polls, however, indicated that party would manage no more than zero to five seats. The party, on the other hand, has expressed confidence in winning at least 22 seats, primarily in Marathwada and Vidarbha regions of the state.

A total of 3,239 candidates were in the fray for 288 assembly seats this election.

The state has a total of 8.98 crore voters, of them more than 1.06 crores are within the age group of 18 to 25 years. Nearly 6.5 lakh polling personnel were deployed at 96,661 polling booths across the state. A total of 4,698 EVM-VVPAT units, 665 ballot units, 596 control units and 3,437 VVPAT machines developed snags, and these faulty machines were replaced, election officials said.

A total of 361 complaints of EVM malfunctioning were filed, including 152 by the Congress and 89 by the Shiv Sena.