The Eknath Shinde camp now claims the support of 50 MLAs, including those of the Shiv Sena and Independents. 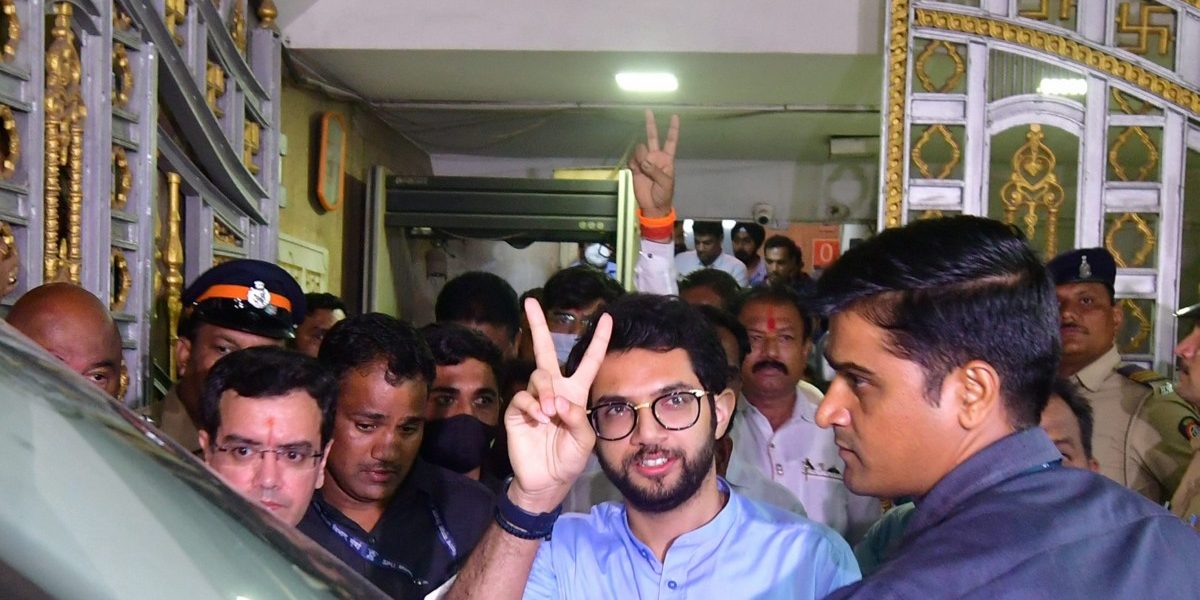 Maharashtra Minister Aaditya Thackeray flashes victory sign as he comes out of Sena Bhavan after a meeting, at Dadar, in Mumbai, Friday, June 24, 2022. Photo: PTI.

New Delhi: The Shiv Sena has sent the names of four more rebel MLAs to the Maharashtra Assembly deputy speaker for initiating action of disqualification against them, a senior leader said.

The party will also issue notices to 16 MLAs of the rebel faction and ask them to respond by Monday, June 27, Sena MP Arvind Sawant said here on Friday.

The four legislators whose names were forwarded to the deputy speaker were Sanjay Raymulkar, Chiman Patil, Ramesh Bornare and Balaji Kalyankar, he said.

“Despite issuing a letter to them, none of them attended the party meeting on Wednesday evening here in Mumbai,” Sawant said.

The party had already given the names of 12 MLAs to the deputy speaker, including the leader of the rebel camp Eknath Shinde, seeking their disqualification.

“Now, only chief minister Uddhav Thackeray can decide about allowing their return to Sena, otherwise party doors are closed for them forever. They have betrayed the saffron flag,” Sawant said.

The Shinde group now claims that they have the support of 50 MLAs, including those of the Sena and Independents.

On Friday evening, Uddhav Thackeray held a meeting with Nationalist Congress Party (NCP) chief Sharad Pawar and a party delegation to discuss the possible strategy to save the government. Both allies, the NCP and the Congress, have extended absolute support to Thackeray. But the meeting of NCP leaders with the CM is said to have debated options to save the government and also the possibility of resignation from the top post.

Rebel Shiv Sena MLA Eknath Shinde, who had been camping out in Assam’s Guwahati with around 37 party legislators, left to return to Mumbai in the afternoon of Friday, June 24, the Indian Express reported.

The move came after Sena MP Sanjay Raut had issued a challenge to the MLAs in the Shinde camp to return to Mumbai.

Subsequently, the Maharashtra assembly’s deputy speaker Narhari Zirwal recognised Ajay Chaudhary as the party’s group leader. Sena MPs from the Thackeray camp had written to Zirwal to make Chaudhary the group head after Shinde’s revolt while Shinde had written a similar letter seeking the post for himself, which had been signed by 37 rebel MLAs.

A day prior, on Thursday, Sena leaders in chief minister Thackeray’s camp had filed an appeal with Zirwal seeking the disqualification of 12 rebel MLAs. The move can be seen as a potential deterrent to the ongoing actions of the rebels.

Shinde, however, hit back at the Thackeray camp in a Tweet, saying, “Who are you trying to scare? We know your make-up, and the law too!”

Reaching the 37-MLA mark, the rebel camp now has the requisite numbers to split the Sena without suffering consequences under the anti-defection law (Tenth Schedule of the Constitution). This rebel majority leaves Uddhav Thackeray in the minority in the verey party which his father, Bal Thackeray, had founded.

Yet, many senior leaders in the ruling MVA alliance in the state remained in support of the chief minister.

The drama unleashed by Shiv Sena leader Eknath Shinde’s rebellion will be settled on the floor of the Maharashtra government, said Nationalist Congress Party (NCP) leader Sharad Pawar on Thursday.

The fate of the Maha Vikas Aghadi (MVA) government – a coalition of Shiv Sena, NCP and the Congress – has been hanging in the balance since Shinde decamped to Gujarat with a number of Shiv Sena MLAs on June 21. Now, Pawar has said that the government’s future will be decided on the floor of the Legislative Assembly, and the Uddhav Thackeray government will prove its majority in a trust vote.

Addressing a press conference, Pawar also asserted that the BJP has played a role in the crisis.

“The fate of the MVA government will be decided in the Assembly, not in Guwahati (where the rebels are camping). The MVA will prove its majority on the floor of the House,” Pawar said.

He was replying to a question about whether the MVA has been reduced to a minority as the Shinde-led rebel faction has claimed the support of 37 Shiv Sena MLAs and ten Independent legislators.

Asked about deputy chief minister Ajit Pawar’s statement that he did not see the BJP’s role in the rebellion within the Sena, Pawar said he did not agree with his nephew. “Ajit Pawar may have said so because he does not know BJP leaders from outside Maharashtra. I know them. Even Eknath Shinde has said a national party has assured him of all assistance,” Pawar said.

As other national parties like the Bahujan Samaj Party, CPM, CPI, Congress and NCP have no role to play in destabilising the MVA, Shinde was referring only to the BJP, he said.

The rebel MLAs will have to come back to Mumbai and face the assembly, he said, adding that BJP leaders “from Gujarat and Assam will not be coming here to guide them.” Pawar also refuted allegations by rebel Shiv Sena MLAs that they faced difficulties in getting funds for their constituencies as the finance ministry, which is controlled by NCP’s Ajit Pawar, discriminated against them, and the Sena has given up its Hindutva ideology.

“All these are excuses, some of these MLAs are facing a probe by central agencies,” he said. The NCP chief also said that the rebels will have to face consequences, recalling that when Chhagan Bhujbal defected from the Shiv Sena to join the Congress in the 1990s, all his supporters except one lost the Assembly election.

“These rebels will face the same fate,” Pawar said.

On Shiv Sena leader Sanjay Raut’s statement that the Sena was ready to quit the MVA if the rebels relented, Pawar said the statement was made to bring them back to Mumbai. Pawar also said the MVA government has performed well in the last two and a half years, and it would be “political ignorance” to call the coalition a failed experiment.

“When the rebels return and speak about how they were taken out of the state, it will be clear which side has the majority,” Pawar said.

Raut on Thursday asked the rebel MLAs camping in Assam to return to Mumbai within 24 hours and discuss their grievances with chief minister Uddhav Thackeray.

The statement came as a surprise to its coalition partners Congress and the Nationalist Congress Party (NCP), with Prithviraj Chavan asking whether Raut was articulating the Sena’s official stand. However, coalition both partners of the Shiv Sena have officially stated that they will support Thackeray.

Reaching out to rebel MLAs, Raut, who is the Shiv Sena’s chief spokesperson, said the party’s “doors are open” to them, and all issues raised by them can be resolved through talks.

The crisis in the Shiv Sena deepened on Thursday, after three more MLAs on Thursday left for Guwahati in Assam to join the rebel camp led by cabinet minister Eknath Shinde. The rebel leader now has the support of 37 Sena MLAs and nine independent ones.

A day after Thackeray made an emotional appeal to rebel MLAs and offered to resign in a bid to placate them, Raut on Thursday indicated that the Shiv Sena is ready to consider leaving the MVA – which Shinde described as an “unnatural” alliance because neither the Congress nor the NCP believed in Hindutva.

“You say you are real Shiv Sainiks and will not quit the party. We are ready to consider your demand provided you come back to Mumbai within 24 hours and discuss the issue with Uddhav Thackeray. Your demand will be considered positively. Don’t write letters on Twitter and WhatsApp,” Raut, who is the party’s chief spokesperson, told reporters here.

In a tweet in Marathi later, Raut said, “Why wander aimlessly? The doors are open and issues can be resolved amicably through talks. Let’s take a decision with self-respect instead of accepting slavery.”

Patole’s statement was in reference to some rebel Shiv Sena MLAs targeting the NCP for denying development funds to them.

Pawar is the state finance minister.

“Ajit Pawar has harassed Congress MLAs and ministers also. We opposed these tactics saying the government was for the welfare of the people. Our opposition to such tactic was not political,” Patole said.

When asked about Patole’s allegation, senior NCP leader and minister Chhagan Bhujbal played down his remarks saying, “Even within parties, leaders complain against each other. So this is not anything that can be taken seriously.” 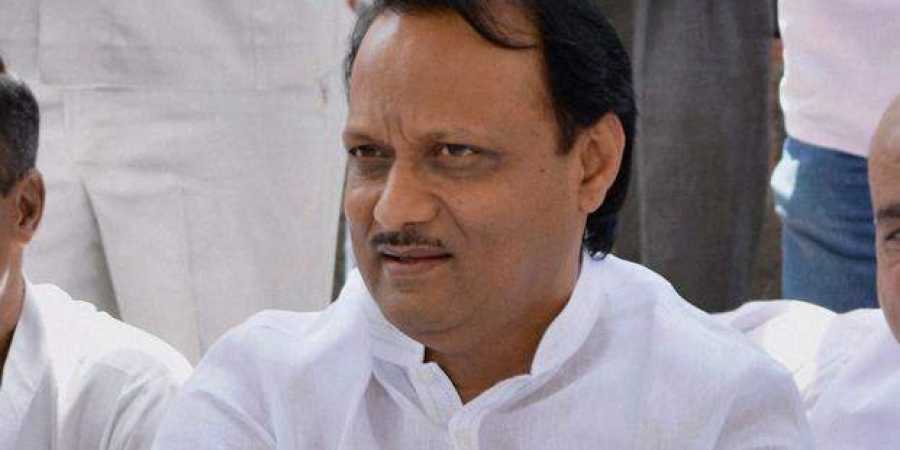 Shinde will consult with the MLAs in Guwahati and then decide when to return to Mumbai, his associate said.

Maharashtra Chief Minister Uddhav Thackeray, late on Wednesday night vacated his official residence in south Mumbai and moved to family home in suburban Bandra, hours after reaching out to Shiv Sena dissidents with an emotional appeal and offering to quit the top post.

The CM moved out of ‘Varsha’, his official residence, for Matoshri, the private bungalow of the Thackeray family.

Neelam Gorhe and Chandrakant Khaire were among party leaders present at ‘Varsha’ when Thackeray, who has tested positive for COVID-19, was leaving the official residence.

He had given a letter to the Maharashtra Legislative Assembly’s deputy speaker, signed by 35 Sena MLAs, replacing Sunil Prabhu with Bharat Gogavale as the chief whip of the Shiv Sena legislature party.

Shinde has maintained that while the NCP and the Congress were growing stronger in the MVA alliance, the Shiv Sena, which heads the governing bloc, and its workers were getting systematically weakened

After reaching Guwahati, Shinde had claimed the support of 46 legislators, including some Independents. The rebel leader had given a letter to the Maharashtra Legislative Assembly’s deputy speaker, signed by 35 Sena MLAs, replacing Sunil Prabhu with Bharat Gogavale as the chief whip of the Shiv Sena legislature party.

Deputy Speaker Narhari Zirwal said he has approved the appointment of Ajay Choudhary as the Shiv Sena’s group leader in the House, replacing rebel legislator Shinde.

The Shiv Sena on Tuesday removed Shinde as the party’s group leader in the Assembly, hours after he revolted and and travelled to Surat in Gujarat with some Shiv Sena MLAs, triggering a crisis in the ruling alliance.

Speaking to reporters on Thursday, Zirwal said, “I have received a letter from the Shiv Sena, informing me that it is appointing Ajay Choudhary as the party’s leader in the Assembly and removing Shinde from the post with immediate effect.” Shiv Sena MLA Kailas Patil, who had escaped from a car carrying rebel legislators to Surat on Monday night, claimed in Mumbai that some of those siding with Shinde might be wanting to return, but were forced to stay back.

Another Sena MLA Sanjay Shirsat has written a letter to the Chief Minister claiming Shinde took the step of going against the party leadership as party MLAs, who faced “humilitation” for the last two-and-a-half years, persuaded him to do so.

Shirsat, the MLA from Aurangabad (West) Assembly constituency, in the letter claimed despite the Shiv Sena heading the MVA and having its own chief minister, the coterie around Thackeray never allowed them access to ‘Varsha’, the CM’s official residence.

Note: This article was originally published at 12:24 pm on June 23, 2022 and republished with additional information.