The former advocate general and Rajya Sabha MP Vivek Tankha is now emerging as the only pan-MP face acceptable to all factions of the party.

Bhopal: With Kamal Nath facing continuous probes over his nephew Ratul Puri and his businesses, Digvijaya Singh castigated for overplaying his hand in the short-lived government and Jyotiraditya Scindia now a BJP member of the Rajya Sabha, Madhya Pradesh is virtually rudderless as far as the Congress is concerned.

Though by most accounts, the BJP is still struggling with its own issues—prime amongst them is the question of bypoll tickets for the 22 new entrants, it is the Congress which is actually facing a leadership crisis.

Septuagenarians Kamal Nath and Digvijaya Singh are essentially running towards their last base. Nath had held on to both the chief ministerial post and the post of the PCC president in the hopes of emerging as the undisputed leader of the party, but his hope was scuttled on two counts: Digvijaya’s manoeuvrings and his own inability and inexperience in tackling state politics.

Digvijaya packed Kamal Nath’s 28-member cabinet with 10 of his thakur acolytes. He also stressed on thakurs wherever possible – from inserting them in key positions in the state bureaucracy to appointing them as information commissioners. His insistence on promoting his own son Jayvardhan and his relative Ajay Singh was resented by the rest of the state Congress leadership. Kamal Nath could not even appoint his own people to various boards and corporations till the very last week when everything seemed lost.

Many even believe that Digvijaya may have deliberately hastened the exit of Scindia to open the leadership slot of North MP for Jayvardhan. But though capable, Jayvardhan is still too young to be accepted widely by other satraps. Ironically, Scindia’s exit has opened the floodgates for the struggle for new leadership within the Congress.

And as Madhya Pradesh is essentially several states within one, each region is throwing up new faces.

Former youth Congress leader and minister Jitu Patwari has emerged as the best bet for Congress in the resource-rich Indore-Malwa region. He is seen as Congress’ Kailash Vijayvargiya with a similar career curve and strongman attitude. The Mandsaur-Ratlam region had a bright prospect in Meenakshi but she seems to have lost steam and Subhash Yadav’s son, former Union minister of state and PCC president Arun Yadav remains the best bet.

North MP – inclusive of the Bundelkhand and Gwalior regions – has besides Jayvardhan, Gobind Singh and Ramniwas Rawat. The Chhindwara-Seoni region has still not thrown up a replacement for Kamal Nath and his son Nakul has so far proven to be a lightweight. Kantilal Bhuria still controls the Jhabua tribal belt but has little impact outside even though he has been a minister at both the state and Union level for almost 20 years.

The large tract of Vindhya Pradesh and Narmada belt from Jabalpur to Hoshangabad appears particularly stripped of leadership for the Congress. Ajay Singh could not carry on his father Arjun Singh’s legacy in Vindhya and lost two consecutive elections. The tallest tribal leader in Shahdol region, eight-time MLA Bisahulal Singh has rebelled and joined the BJP. OBC leader Inderjit Patel’s son Kamal Patel has also lost his opportunity in Satna region and so has former speaker Sriniwas Tiwari’s son and former MP of Sunderlal in Rewa.

In Bhopal, the former advocate general and Rajya Sabha MP Vivek Tankha is now perceived to be the only pan-MP face acceptable to all factions and is thus emerging as the new pivot for the Congress. He has grown under the shadow of both Nath and Digvijaya as their legal advisor but has leapfrogged into reckoning because of his close association with the Gandhi family. The Gandhis and Vadras are neck-deep in legal tangles and require constant support from senior lawyers which has led to Singhvi, KTS Tulsi, Kapil Sibal and P. Chidambaram all finding Rajya Sabha seats from various Congress-ruled states.

Also read: Has the Scindia Scion Overplayed His Hand?

Tankha has several other things going for him and one of them is the long years of work he has put into the social and health sector. He is known for holding fortnight-long eye camps in tribal regions like Mandla and running schools for specially-abled children in at least two states. In the past few months, things have also moved in his favour politically. Vindhya which is dominated by Thakurs and Brahmins has not found a tall Brahmin leader since Sriniwas Tiwari and there is a gravitation towards Tankha whose family belonged to the Rewa-Satna region and is a Kashmiri Brahmin. The lack of Brahmin leadership in Vindhyas also cost the Congress in the last elections as it performed terribly – winning only four of the 34 assembly seats.

The undivided Madhya Pradesh Congress also had a tradition of Brahmin leadership when Shuklas from Chhattisgarh, DP Mishra from Sagar, Shankar Dayal Sharma from Bhopal, Kailash Katju, Bhagwant Mandloi as also Motilal Vora all became chief ministers. After Arjun Singh, it was Digvijaya who managed to contain the flood of Brahmin leadership in the state. He pointedly promoted thakurs at the expense of Brahmins to retain control as a result of which Brahmins shifted allegiance to BJP and took along with them substantial influence on vote banks. 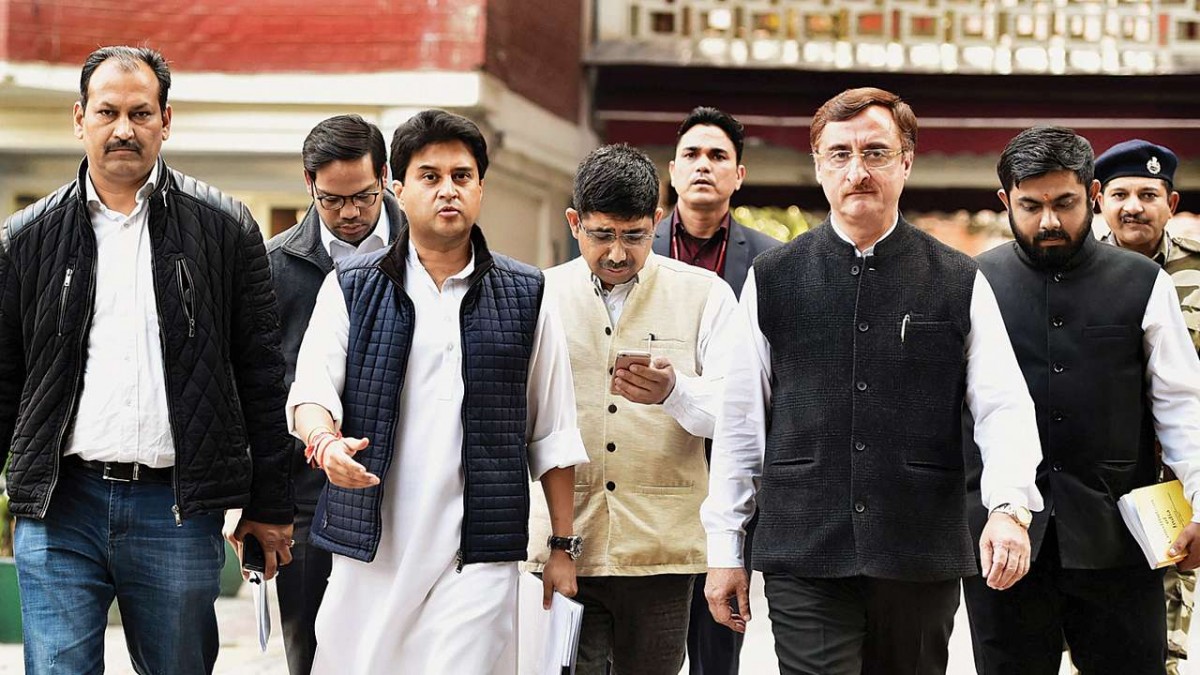 Tankha may be emerging at the right time as far as caste combinations are concerned but his leadership will largely depend upon the respect he draws from the middle class and youth. At a recent webinar organised by a college with Vijay Sharma of Paytm, Tankha drew more than 1.5 lakh viewers online. Another strong lobby supporting him consists of advocates. Across the state, they identify with him for his soft-spoken easy manners and also find in him a suitable candidate from their tribe which has not produced anyone notable over the past two decades.

In the lean COVID-19 period, Tankha has been the most visible face of the party as well. His petitions to the president and the election commission regarding a chief minister holding all portfolios forced Chouhan to hurriedly swear in a cabinet. He has also been instrumental in forcing the state information commissions of all states to deal with cases online. His hard-hitting articles in local media have also enhanced his image.

Also read: How Vivek Tankha, a Little-Known Congressman, Set Off a Domino Effect of Resignations

There is every likelihood though, despite all his credentials, that he may not succeed because of how whimsical politics in Madhya Pradesh is. With Digvijaya out of favour in Delhi but still in control of the state party apparatus and Kamal Nath in control of the money bags, Tankha will have to wait for more manna from heaven like Scindia’s exit to find a place at the top of the heap.