“It is very disappointing that my earlier letters not only went unacknowledged, but the serious concerns that were raised therein remain unaddressed,” Kharge wrote to Modi. 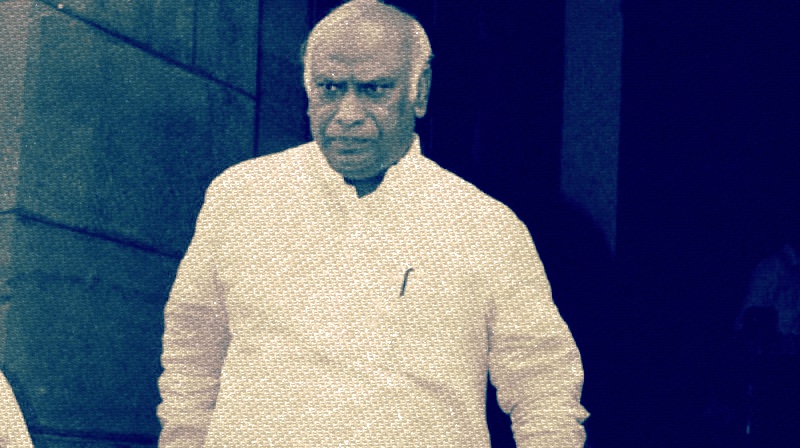 New Delhi: Congress Lok Sabha leader Mallikarjun Kharge has once again written a protest letter to Prime Minister Narendra Modi to say that despite two similar letters sent earlier, he is still being invited to the Selection Committee meeting for the appointment of a Lokpal as a “special invitee” instead of a “member”.

Rights activists have also, for a while now, been accusing the Modi government of not being interested in appointing a Lokpal and of using the “ploy” of there not being a Leader of the Opposition to stall the process. Kharge’s letter also avers to the repeated attempts to delay the matter.

Kharge noted that the invitation extended him for the meeting called for July 19 had been sent to him on July 6 by the Department of Personnel and Training (DoPT) despite his earlier letters sent on February 28 and April 10 this year in which he had objected to his being invited as a “special invitee” for the meetings that were convened on March 1 and April 10 respectively.

“It is very disappointing that my earlier letters not only went unacknowledged, but the serious concerns that were raised therein remain addressed,” Kharge wrote to Modi.

Referring to the obdurate stance of the Centre in the matter, Kharge further stated that “the government insists on continuing to invite me as a special invitee to the Selection Committee meeting despite being aware of the fact that there is no such provision under section 4 of the Lokpal Act.”

‘No voice for the opposition’

He also charged that the Modi government has been deliberately not allowing the opposition to have a say in the appointment of a Lokpal. “It has been four years since your government came to power and the government was indeed sincere about including the voice of the opposition in the process, it could have brought in the necessary amendments to ensure the same,” he wrote.

On why he should have been invited as a member, Kharge explained that “the Select Committee has approved the amendment to the Lokpal Act to include the Leader of the single largest Opposition party as a member of the Selection Committee”. He added to good measure that “the fact that this amendment has never been brought before the House by the government clearly indicates that the government is keen to keep the opposition outside the process of appointment the Lokpal”.

‘Appointment of Lokpal never a priority for this government’

The Congress leader also charged that “the submissions made by the Supreme Court and its actions indicate that the appointment of the Lokpal has never been accorded due importance or priority by your government. In fact, the recent actions of the government, including the dilution of the Right of Information Act and the Whistleblower’s Protection Act shows that instead of strengthening laws to fight corruption and empowering the common man, betrays the intentions of this government.”

‘Special invitee has no rights of participation, recording of opinion, voting’

The senior Congress leader cautioned against the making of a Lokpal without the presence of an opposition leader in the committee. “Any eminent person who would be chosen for appointment as Lokpal would not accept this appointment made by a Selection Committee that did not consider the views of the opposition,” he said.

Also, Kharge reminded Modi that “since no amendments in the Lokpal and Lokayuktas Act, 2013 have been carried out, an invitation as a “special invitee” without rights of participation, recording of opinion and voting in the procedure, is only to mislead the nation and the people, rather than sincerely seeking the participation and opinion of the opposition”.

Stating that the process of appointing the Lokpal has been “vitiated”, Kharge declined the invite to participate in the Selection Committee meeting. “I would not be able to attend the meeting of the Selection committee until the Leader of single largest Opposition party is conferred the status of a full-fledged member as envisioned in the Lokpal Act, 2013,” he made it known to Modi.

‘A procedure reduced to a political pretence’

It would also be pertinent to recall that while objecting to a similar invitation for the March 1 meeting, Kharge had charged that by inviting him as a “special invitee”, the Centre had reduced the proceedings of appointing the Lokpal from a “a sacred procedure to a political pretence”.

He had also stated that the entire opposition was of the view that the “special invitee invitation” was a “concerted effort to exclude the independent voice of the opposition altogether from the selection process of the most important anti-corruption watchdog” and that the move negated the “letter and spirit” of the Lokpal Act, 2013. He had then demanded “a more apt and statesman-like conduct is expected from the prime minister of the country”.

Anti-corruption activists had seen through the game earlier

Even before Kharge had made his opposition known, many anti-corruption activists had declared that the invitation to him was only an “eyewash” as the government wanted to pull wool over the apex court’s eyes which has been monitoring the developments.

Incidentally, the March 1 meeting was planned close on the heels of a Supreme Court hearing of a PIL in which the apex court had asked the secretary of the DoPT to file an affidavit about the “steps taken and proposed” by the Centre to appoint the Lokpal.

PIL had raised issued of delay in appointment

Hearing a PIL filed in 2014 by NGO Common Cause, led by senior advocate Prashant Bhushan, the court had in March 2018 taken into account the submission of attorney general K.K. Venugopal that a meeting between Modi, Chief Justice of India Dipak Misra, Lok Sabha speaker Sumitra Mahajan and leader of the largest party in opposition Mallikarjun Kharge had been convened on March 1 to discuss the appointment of a Lokpal.

However, following this hearing, Bhushan had tweeted that the Centre had acted only after the threat of contempt of court was staring it in the face.

Earlier, in January this year, the National Campaign for People’s Right to Information had written a detailed letter to Modi, stating that the delay in the appointment of Lokpal ‘has created a strong perception that that your government does not wish to put in place an effective anti-corruption institutional framework’.

For want of a Leader of Opposition, not a single Lokpal appointed

The NCPRI had noted with concern that while the Lokpal law was passed by parliament in December 2013 and was notified in the gazette on January 1, 2014, not a single Lokpal has been appointed till date. “The Lokpal law was demanded by the people of the country as there was a need for an independent and empowered body to look into cases of corruption of public servants,” it had added.

But it noted that “despite the fact that there appears to be no legal barrier to prevent the recognition of a Leader of Opposition (LoP), in the 16th Lok Sabha no LoP has been recognised. As a result the selection committee under the LL Act has not be constituted and therefore no appointments have been made to the Lokpal”.

The letter had also pointed out that the Lokpal and Lokayuktas (Amendment) Bill, 2016, introduced by the current government in parliament in July, 2016, for immediate passage, had not included any provision to alter the composition of the selection committee (to provide that in the absence of a recognised leader of opposition, the leader of the single largest party/group in opposition in the Lok Sabha will be included in the selection panel).

“In the absence of a recognised LoP, to operationalise the LL Act, a simple amendment was required to the law to provide that in the absence of a recognised leader of opposition, the leader of the single largest party/group in opposition in the Lok Sabha will be included in the selection panel for appointing the Lokpal. However, the Lokpal and Lokayuktas (Amendment) Bill, 2016 introduced by your government in parliament in July 2016 for immediate passage did not include this provision to alter the composition of the selection committee,” the letter had further suggested.