The opposition also slammed the government for the 'misuse of central investigation agencies' in view of the arrest of Shiv Sena leader Sanjay Raut by the Enforcement Directorate. New Delhi: After two weeks of protests by the Opposition, the Union government on Monday, August 1, finally relented to having a debate on price rise. The debate began after the suspension of four Congress MPs had been revoked.

Earlier in the day, both the Lok Sabha and Rajya Sabha witnessed protests by the opposition on the issue of the “misuse of central investigation agencies” in view of the arrest of Shiv Sena leader Sanjay Raut.

That the Lok Sabha resumed normal functioning in the afternoon was a big surprise since until morning there was no sign of rapprochement between the opposition and the government. The suspension of 27 MPs – 23 from the Rajya Sabha and four from the Lok Sabha – on the charge that their protests were unruly had further strained the relations between the two sides.

On Monday morning too, when the parliament proceedings began there did not appear to be any thaw. As soon as Lok Sabha assembled, the opposition members resumed protests against the government over not accepting their demand for a debate on price rise and against the suspension of Congress MPs, Manickam Tagore, Jothimani, Ramya Haridas and T.N. Prathapan for the rest of the session. 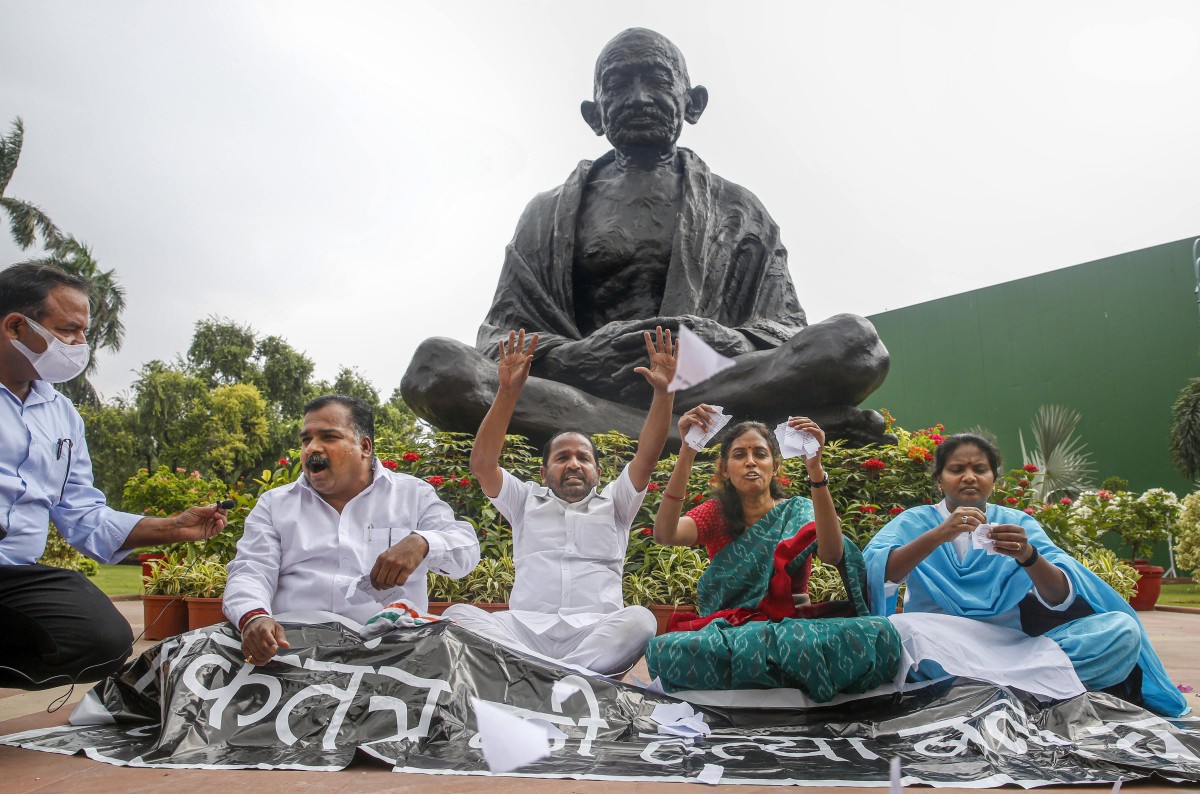 Thereafter the House adjourned till 2 pm. During this period, speaker Om Birla, who had in the morning claimed that protests with placards and in the Well lowered the dignity of the House, had a meeting with leaders of various parties to find a solution to the impasse. Subsequently, parliamentary affairs minister Pralhad Joshi said the government was ready for a discussion on price rise in Lok Sabha on Monday and in Rajya Sabha on Tuesday.

After the meeting, when the House re-assembled, the government moved a motion to revoke the suspension of the four Congress MPs and it was passed by the House.

The Speaker then insisted that the decorum of the House be maintained and demanded that the MPs not bring any placards inside the House. Leader of the Congress in Lok Sabha Adhir Ranjan Chowdhury for his part urged that all the political parties be allowed to raise their issues.

Thereafter, as the two sides came to a truce, the House took up the discussion on price rise. Initiating the discussion, Congress MP Manish Tewari accused the Union government of “eight years of economic mismanagement”. He said it was because “the government kept filling its coffers and (kept) lessening the pockets of the public” that people were finding themselves in such distress.

The Congress leader said by raising the prices of items of daily use, the government might have corrected its budget but it has ruined the budget of households across the country. He said even children have not been spared this onslaught and prices of items like pencils and sharpeners have also been raised.

On behalf of the Trinamool Congress, MP Kakoli Ghosh Dastidar attacked the government for the sharp increase in the prices of fuel. She said the price of Liquid Petroleum Gas has gone up affecting household expenditure. She also remarked if the government wanted people to acquire the habit of eating uncooked food.

For the BJP, its MP Nishikant Dubey drew a comparison to the situation in India’s neighbouring countries and claimed that things were much better here.

“If we see Sri Lanka, Bangladesh, Bhutan, and Singapore, everywhere inflation is rising and jobs are being lost. Amid such a situation if the poor are getting two-time meals free of cost then shouldn’t we thank the PM,” he said, trying to paint a rosy picture for the country.

In the Rajya Sabha, there were protests in the morning over the issue of the arrest of Raut. Shiv Sena MP Priyanka Chaturvedi had earlier given a suspension of business notice seeking a discussion on the “misuse of premier investigative agencies by the Central government for political agenda”. As the issue was not taken up, the party MPs protested. Simultaneously, other Opposition party MPs also protested on the issue of price rise, alleged “misuse” of the ED, and against the Agnipath scheme.

Union minister Piyush Goyal later said the issue of price rise was listed for Tuesday, August 2. Stating that the government is a “lawmaker and not lawbreaker”, he demanded that the Opposition give the assurance that once the issue was listed, they will allow the House to function.

Goyal also accused the Opposition of stalling important work of the House. He said there were many Bills that have to be passed but were having to wait as the House is getting adjourned. The BJP leader said the suspensions of Rajya Sabha MPs too would be withdrawn if assurance was given in the House that they will protest with placards.

Amid the commotion and din of protests, the Rajya Sabha on Monday passed the Weapons of Mass Destruction and their Delivery Systems (Prohibition of Unlawful Activities) Amendment Bill, 2022, which had received the nod of the Lok Sabha in April.