Phase One: Voter Complaints Over Malfunctioning EVMs Pour in From Several States

Many voters, including one who took a video, alleged that despite their pressing the symbol for parties other than the BJP, their votes were recorded as votes for the ruling party.

EVM machines, VVPATs and other election material being distributed among polling officers ahead of the first phase of polling in Tezpur, April 10, 2019. Credit: PTI

New Delhi: Even as voting for the first of the seven phases for the 17th Lok Sabha came to a close at 6 pm on April 11, a number of reports on voter complaints poured in from across the country regarding malfunctioning electronic voting machines (EVMs).

While reports of non-functional EVMs leading to a delay in voting have come in from several places in Andhra Pradesh, Maharashtra, Uttarakhand, Jammu and Kashmir, Bihar, Assam, Manipur, West Bengal, Odisha and Uttar Pradesh, most media reports particularly highlighted glitches like the choice of buttons for some parties either missing from the EVMs or not working, or on pressing any one of the choices, the vote registered on the VVPAT was recording it under the BJP’s election symbol.

From Assam’s Tezpur parliamentary constituency and Meghalaya’s Shillong constituency came some of the first reports of voters alleging that their votes were going to the BJP even if they hit the button for another candidate.

The Tezpur constituency is witnessing a stiff contest between Congress’s MGVK Bhanu and BJP’s Pallabh Lochan Das. The recent mob attack on an elderly Muslim man for selling beef was reported from this Lok Sabha constituency.

However, the chief election officers of both Assam and Meghalaya that such a glitch had happened. The Assam CEO, Mukesh Sahu, while responding to a media report, called it “fake news”.

However, a similar voter complaint was reported from a polling booth in Meerut too with a video as evidence, leaving election officials trying to resolve the problem. The Times of India said, “Although officials replaced the ‘faulty’ machine, claiming it was a ‘malfunction’, non-BJP parties alleged that machines had been tampered with.”

The fault came to light after a voter who had wanted to vote for the BSP, recorded a video showing the VVPAT machine recording his vote as a BJP vote. “I have been waiting for an hour, but no solution has been provided so far,” the voter can be heard saying in the video. 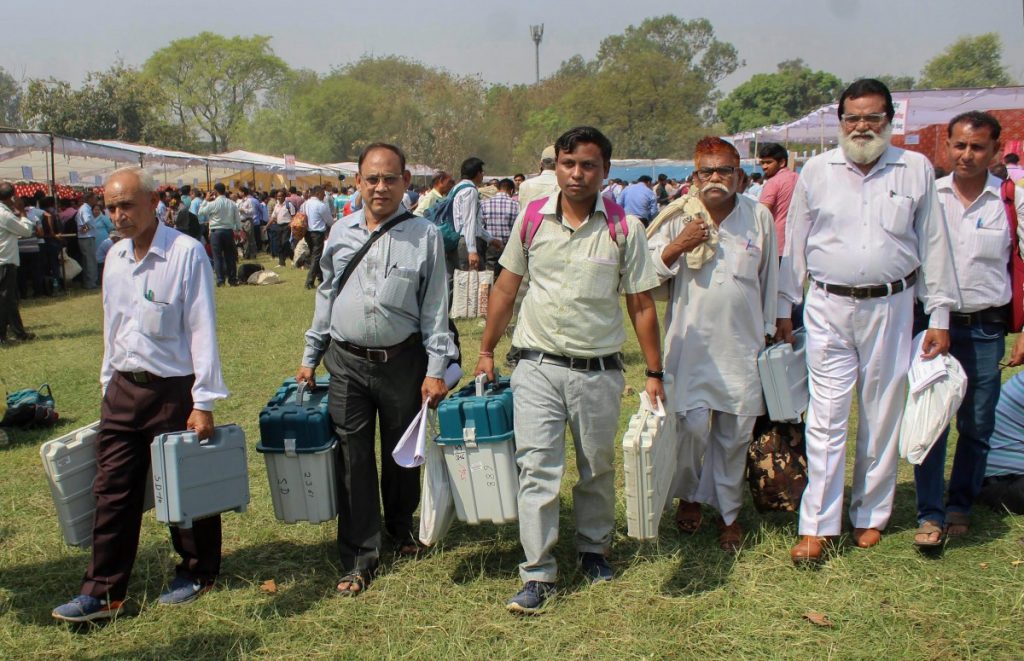 Election officials seen at an EVM distribution centre, ahead of the first phase of polling in Meerut, April 10, 2019. Credit: PTI

Later, BSP leader Satish Mishra told reporters, “We have registered complaint with the Election Commission and have sent them a video clip of the EVM, in which it is seen that the ‘elephant’ symbol is being pressed but the vote is going to the BJP’s ‘lotus symbol’. Our people had complained against it but no action was taken.”

Nagaland deputy chief minister and BJP leader Y. Patton was also seen in a video clip violating the model code of conduct by entering a polling booth in the state to vote by wearing a scarf showing his party symbol.

Also read: BSF Personnel Fire in the Air as People Try to Vote Without ID Cards in Kairana

The video was shared on Twitter by Nagaland Congress, which also claimed that he had voted “eight times”. In the 2014 Lok Sabha polls, then prime ministerial candidate of the BJP, Narendra Modi, had attracted an FIR by the Election Commission for violating the Representation of People’s Act, 1951, by clicking a selfie with his party’s poll symbol at a booth in Gandhinagar.

Photos and video clips of policemen in Uttar Pradesh’s Gautum Buddh Nagar serving meals to security personnel on election duty in packets labelled ‘Namo Foods’, also made to the news.

Food packets were seen distributed from the back of a car by a policeman in uniform in Sector 15A area of Gautum Buddh Nagar.

Vaibhav Krishna, the senior superintendent of police of Gautum Buddh Nagar, later called it “misinformation”. “At local level, some food packets were procured from Namo Food Shop and (it is) not from any political party,” he said. 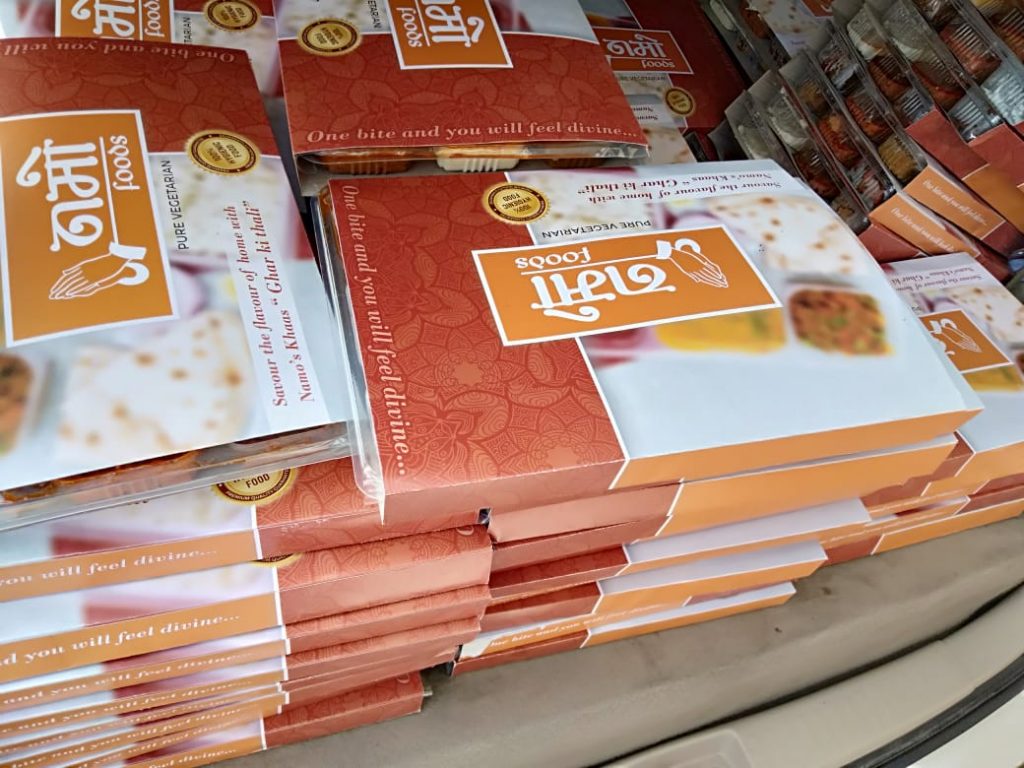 Also, former Jammu and Kashmir chief minister and People’s Democratic Party (PDP) leader Mehbooba Mufti, shared a video clip on Twitter showing several voters in Jammu shouting at a security person. She alleged that her former ally, the BJP, was “using armed forces at polling stations to coerce people” to vote for it.

It “shows their desperation and hunger to usurp power by hook or crook,” she wrote.

A voter at polling booth in Jammu was manhandled by the BSF because he refused to cast his vote for BJP. Using armed forces at polling stations to coerce people to vote for the BJP shows their desperation & hunger to usurp power by hook or crook. pic.twitter.com/Hmr8zocQ44

Omar Abdullah, also a former chief minister of the state and the leader of the National Conference, tweeted a YouTube video where the polling officer of Shahpur booth in Poonch district of Jammu could be heard saying that voting had been delayed as the button “with the hand symbol” on the EVM machine was not functioning.

Abdullah also tweeted, “Public in Loran left polling station without casting vote.” The area is considered to be a Congress pocket in an otherwise BJP stronghold. In the 2014 general elections, Jugal Kishore of the BJP was elected from Jammu.

In Andhra Pradesh’s Guntakal area, where voting to the assembly polls took place simultaneously with the Lok Sabha polls today, Madhusudan Gupta, candidate of the Jana Sena Party, smashed an EVM in anger, alleging that party symbols were not properly printed on the ballot unit. He was later arrested.

Andhra chief minister Chandrababu Naidu’s assembly constituency Kuppam also reported faulty EVMs. Naidu has demanded re-polling in all the booths which faced EVMs issues, as it led to a loss of three hours of polling.

The Koliabor constituency is seeing a close fight fight between Gaurav Gogoi, the sitting MP and son of former Assam chief minister Tarun Gogoi, and Manimadhab Mahanta, former student leader and brother of Keshav Mahanta, AGP leader and a minister in the BJP-led government.