Voting for the 543 Lok Sabha seats is being held in seven phases. 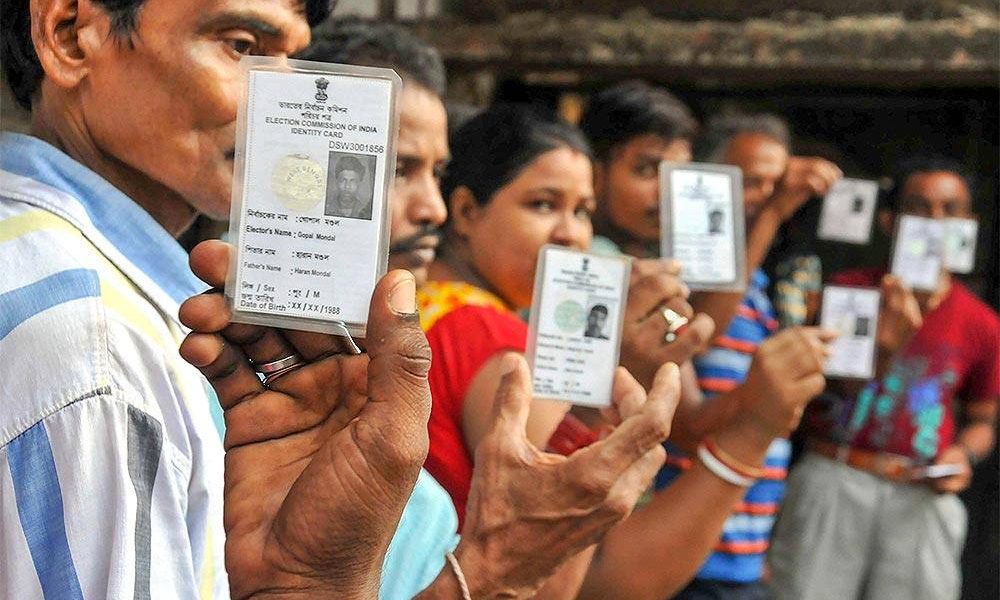 Voting is also underway in 175 assembly seats in Andhra Pradesh, 32 in Sikkim and 28 seats in Odisha.

Polling in all the Lok Sabha constituencies of Andhra Pradesh (25), Telangana (17), Uttarakhand (5), Meghalaya (2) and Arunachal Pradesh (2) besides lone seats in Mizoram, Tripura, Manipur, Nagaland, Sikkim, Andaman and Nicobar, and Lakshadweep is being held.

Eight seats in Uttar Pradesh, seven in Maharashtra, six in Bihar, five in Assam, four in Odisha, two each in Jammu and Kashmir and West Bengal and one seat in Chhattisgarh are also going to polls.

The BJP will look to defend 32 of the 91 seats while Congress is hoping to defend seven seats that it won in 2014 and is looking for major gains in Andhra Pradesh, Maharashtra, Chhattisgarh, Uttarakhand and Uttar Pradesh.

As polling began, Prime Minister Narendra Modi urged voters to turn out in large numbers to exercise their franchise.

“I call upon all those whose constituencies are voting in the first phase today to turn out in record numbers and exercise their franchise,” he tweeted.

“I specially urge young and first-time voters to vote in large numbers,” he said.

Congress president Rahul Gandhi, on his part, urged voters to vote wisely for the soul of India and its future.

Referring to promises made by Prime Minister Narendra Modi before assuming power, Gandhi reminded voters that instead of jobs and Rs 15 lakh in bank accounts of people, the Modi government has given them “no jobs, distrust, violence, hate and fear”.

“You vote today for the soul of India. For her future. Vote wisely,” he tweeted.

Naxals triggered an IED blast on Thursday morning in Chhattisgarh’s Narayanpur district in Bastar Lok Sabha constituency where voting is underway, a senior police official said. No casualty was reported in the incident, he said.

A thick security blanket, comprising around 80,000 state and paramilitary personnel, was thrown across the Bastar Lok Sabha constituency where polling is being held in its four assembly segments – Dantewada, Konta, Bijapur and Narayanpur – from 7 am to 3 pm.

The voting time in the remaining four assembly segments – Bastar, Chitrakoot, Kondagaon and Jagdalpur – is from 7 am and 5 pm, the official said.

Total seven candidates are in the fray in the Bastar Lok Sabha constituency.

An estimated 10.2% voters on Thursday exercised their franchise in the first two hours of polling in five parliamentary constituencies in Assam, amid reports of EVM glitches in a few booths and an IED being detected at an oil pipeline, officials said.

There are reports of EVM glitches in a few booths under Lakhimpur and Kaliabor constituencies, delaying the beginning of polls, an official said, adding, district election offices are looking into the matter.

Security has been tightened in all the 9,574 polling booths and there are no reports of any untoward incident from anywhere so far, police said.

Prominent personalities to exercise their franchise in the early hours were former chief minister Tarun Gogoi, accompanied by his wife Dolly and son Gaurav Gogoi, who is the sitting MP and Congress candidate from Kaliabor constituency.

Voting on all five parliamentary constituencies in the state is being held today. The former chief minister of the state, Ramesh Pokhriyal Nishank cast his vote at a polling booth in Dehradun this morning, ANI reported.

In the state’s Cooch Behar, among the two constituencies that will vote on April 11, voting was briefly halted in the new town higher secondary girls school due to issues with voting machines, India Express reported.

Central forces are guarding over 1,100 booths in the constituency.

Voting on two parliamentary constituencies in the state is being held today.

Voting is being held in one of the two parliamentary constituencies in the state today – Outer Manipur Lok Sabha constituency.

Earlier this week, the chief electoral officer (CEO) of Manipur had written to the returning officer of the Outer Manipur parliamentary constituency to enquire into a plea to disqualify BJP candidate Benjamin Mate from contesting the polls for violating the model code of conduct.

Mate reportedly has been using “KNO (Kuki National Organisation) and other armed militant groups who are under suspension of operation (SOO) with both the state and the central governments” to pressurise voters into supporting him with ballots.

All 25 Lok Sabha and 175 assembly seats in the state go to polls today.

In many places, electronic voting machines (EVMs) had glitches resulting in some delay in polling, an official said.

Andhra Pradesh Chief Minister Chandrababu Naidu and his family after casting their vote for #LokSabhaElections2019 in Amravati. pic.twitter.com/QzlYYfNzjd

State chief electoral officer Gopal Krishna Dwivedi cast his vote in Tadepalli and said there were complaints about technical glitches in EVMs in about 50 places. Technical teams were on the job to rectify the defects and enable polling, he said.

Voting on seven parliamentary constituencies in the state will be held today. Union minister and BJP heavyweight Nitin Gadkari is contesting the BJP rebel leader Nana Patole, who is often called a “giant killer”. Patole is contenting on a Congress ticket. In 2014, he had defeated the Nationalist Congress Party leader Praful Patel from Bhandara-Gondiya constituency.