Issue-Based Politics Has Trumped Communalism in UP – For Now

Livelihood issues took precedence despite the BJP's attempts to polarise the electorate. While this year's campaign was unlike the preceding one in 2017, will results also reflect this change? 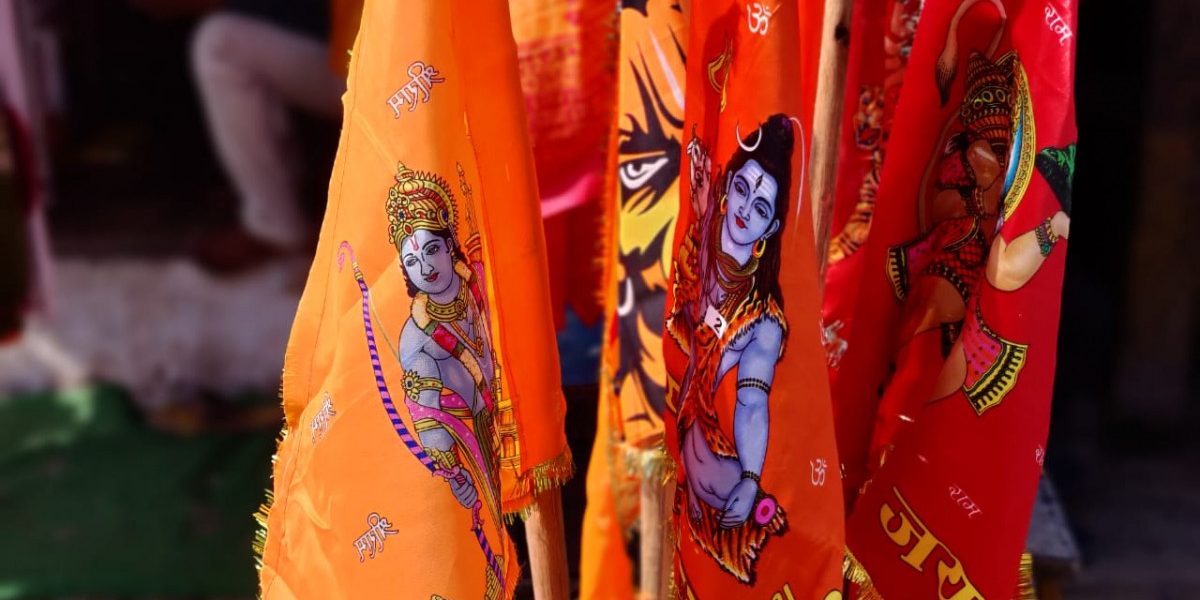 Flags with images of Hindu deities on them. Photo: Ismat Ara/The Wire

New Delhi: While it may not be possible to accurately predict which party will form the government in Uttar Pradesh, one thing is clear: this election was all about livelihood issues. The 2022 assembly elections were, by no stretch of the imagination, like the preceding one in 2017.

Call it job distress, fatigue or anti-incumbency sentiment, the “Modi wave” which was evident in 2017 was not much of a force this time. Instead, the contest was centred around the chief minister Yogi Adtiyanath and his primary challenger, Akhilesh Yadav of the Samajwadi Party.

In a communally sensitive state like UP, several attempts to polarise voters on religious lines were made. But provocative statements like “abba jaan” and “80 vs 20” by none other than Adityanath seemed to find little or no traction among people.

The communal rhetoric was ramped up and calls for “Hindu unity” were made in several districts but got largely overlooked by more-pertinent issues like unemployment, agrarian distress, health and education infrastructure in rural areas.

The devastation caused by COVID-19, widespread protests by unemployed youth and the farmers’ anger over the three farm laws too contributed to this shift in conversation.

The focus on the state’s poor economic parameters in the run-up to the polls can be partly credited to farmer leader Rakesh Tikait’s call for Hindus and Muslims to unite in a farmers’ mahapanchayat in Western UP. This kickstarted the process of communal harmony in the region, which spilt over into other regions and gave way to the dominance of livelihood issues in the run-up to the assembly polls.

A resident of Sonbhadra, while pointing out the unclean water issues in Makra village and the subsequent deaths caused by it, said that people are “scared” to drink water.

“Every time we drink water, we hope that we will not die,” he said.

In Ayodhya, there is an ongoing tussle between the administration and small traders whose shops will be demolished for the beautification of the city where a Ram temple is being built.

“During the Ram Janmabhoomi movement, we were the ones who served water, food to the karsevaks. If those people who have honoured Lord Ram are left without livelihoods, why will they vote for the BJP?” Abhay, speaking about the traders who sell puja items asked.

“Many traders, especially smaller ones, are getting disillusioned with the BJP because of the direct attack on their livelihoods,” Nand Kumar Gupta, an SP worker said about the small scale traders in Ayodhya.

“We also want vikas (development) in Ayodhya. We want the Ram Temple, too. But not at the cost of our livelihoods,” said Awdesh Kumar Modanwal, who sells puja items in his century-old shop.

Muslims that The Wire spoke to in several places said that they want to vote for the SP-RLD alliance for one simple reason: it is their only chance to defeat the BJP, which they say has perpetrated widespread violence against the community. 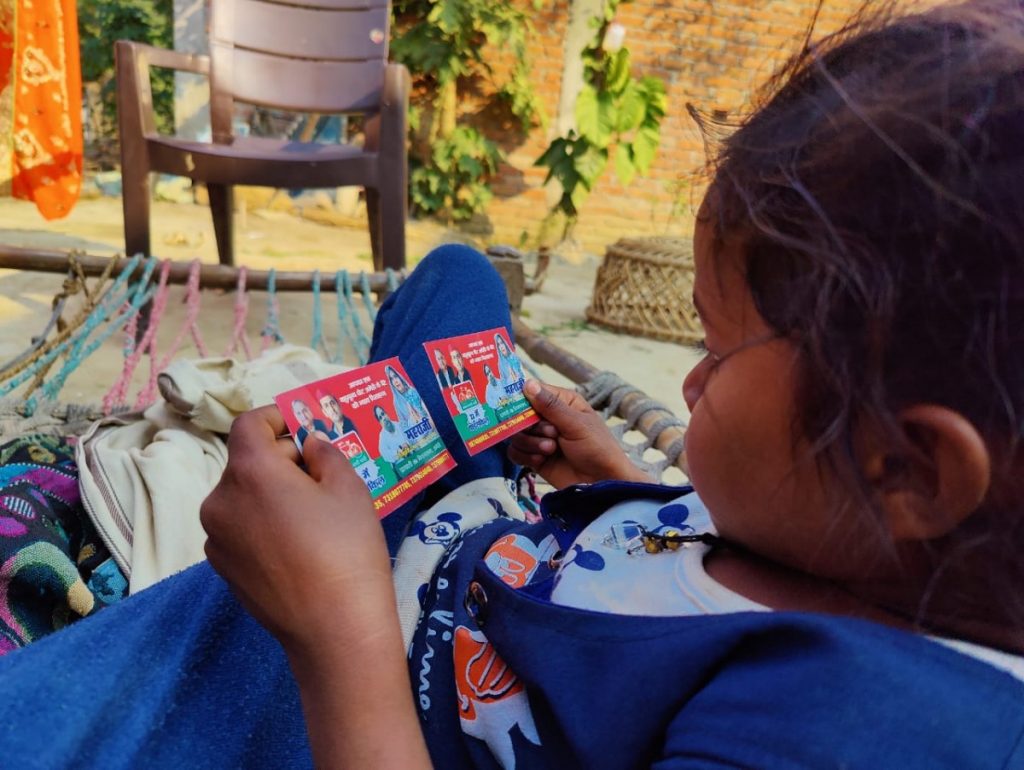 A girl looks at posters of the Samajwadi Party. Photo: Ismat Ara/The Wire

This correspondent spent about a month in Uttar Pradesh during the elections. Issues faced by people largely centred on unemployment, stray cattle, roads, unclean water and road access – from West UP to East.

Towards the end of the election campaign, none other than Prime Minister Narendra Modi himself brought up the problem of stray cattle in a speech, even as he went on to pivot the BJP’s initial majoritarian campaign towards the Union government’s free ration scheme for the poor.

Several farmers that The Wire interacted with said that their lives had become tough because of the stray cattle menace. Shanti, a farmer in Raebareli, had lost her husband to illness. Three months after his death, her crop was destroyed by stray cattle, pushing her further into misery.

“This will be a difficult year,” she said, adding that she has two daughters and no source of income.

Sometimes, getting people, especially women in rural belts to express themselves is a big challenge. This time too, it was difficult to understand the women voters’ preferences clearly.

There is either an inability or reluctance to articulate their demands. All they will tell you is that free ration is great but their sons and husbands do not have jobs.

In a Dalit basti in Amethi, women were either unconcerned with party politics or simply voted for the same symbol as their fellow villagers.

It seems unlikely that women will emerge as a separate vote bank, like in Bihar or West Bengal.

This also means that the Congress’s campaign in UP, centred around women, may only have limited results in the 2022 polls.

Priyanka Gandhi Vadra’s “Ladki hoon, Lad Sakti hoon” (I am a girl, I can fight) was an attempt to give voice to the issues of women but there is no evidence to suggest that they will vote differently from male members of their communities. 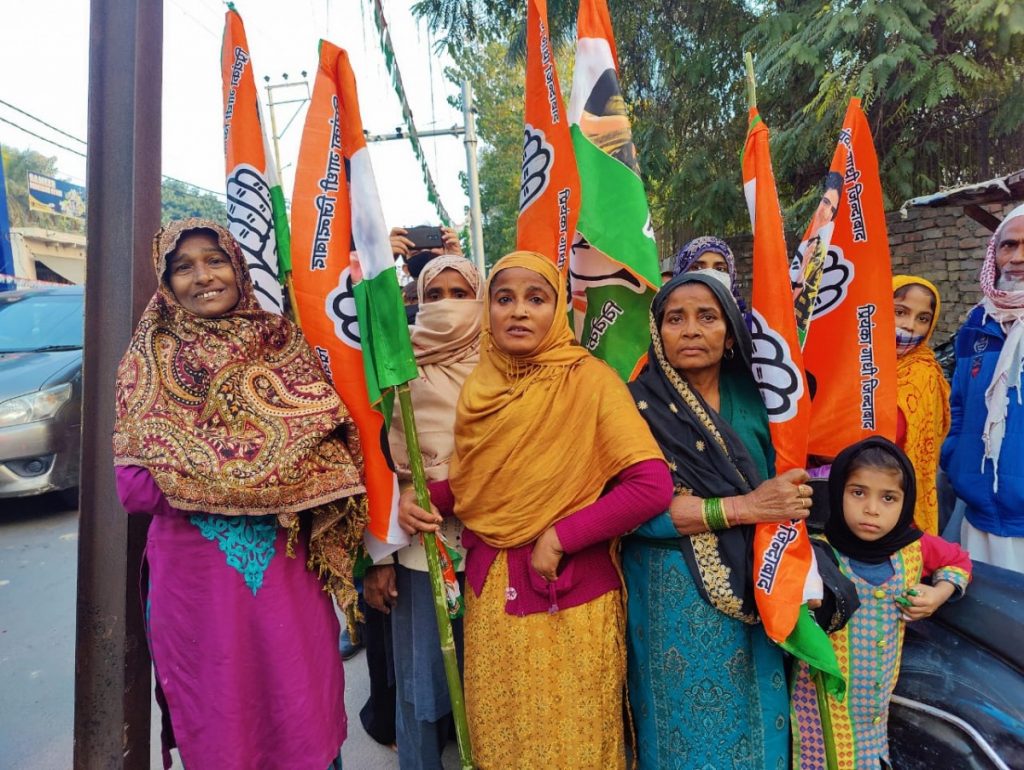 Most of the women expressed satisfaction with the free ration, which doubled in 6 months, and it seemed as if the free ration by the ruling party was breaking the caste and class barriers and empowering the backward communities.

With the COVID-19 pandemic forcing job losses and hefty medical bills for many, the free ration was the only silver lining for many families.

One woman in Mirzapur, employed in the small-scale beedi industry, said that when all work activities were stopped during the lockdown, “it was the free ration that sustained” her family.

“It was like a saviour…we didn’t have to beg, at least for basic food” she added.

However, in other places like Sonbhadra, this correspondent also encountered rural people complaining about the quality of the salt and grains distributed by the government.

In other government schemes such as the CM’s housing programme, there was a clear divide between beneficiaries and others. In Mirzapur’s Matawar region, for instance, hardly a hundred people – out of thousands who are eligible – were living in houses under the scheme.

Most toilets constructed in the village under the Swach Bharat Abhiyan (Pradhan Mantri Sauchalay Yojana) had broken down shortly after they were constructed or had never been completed. 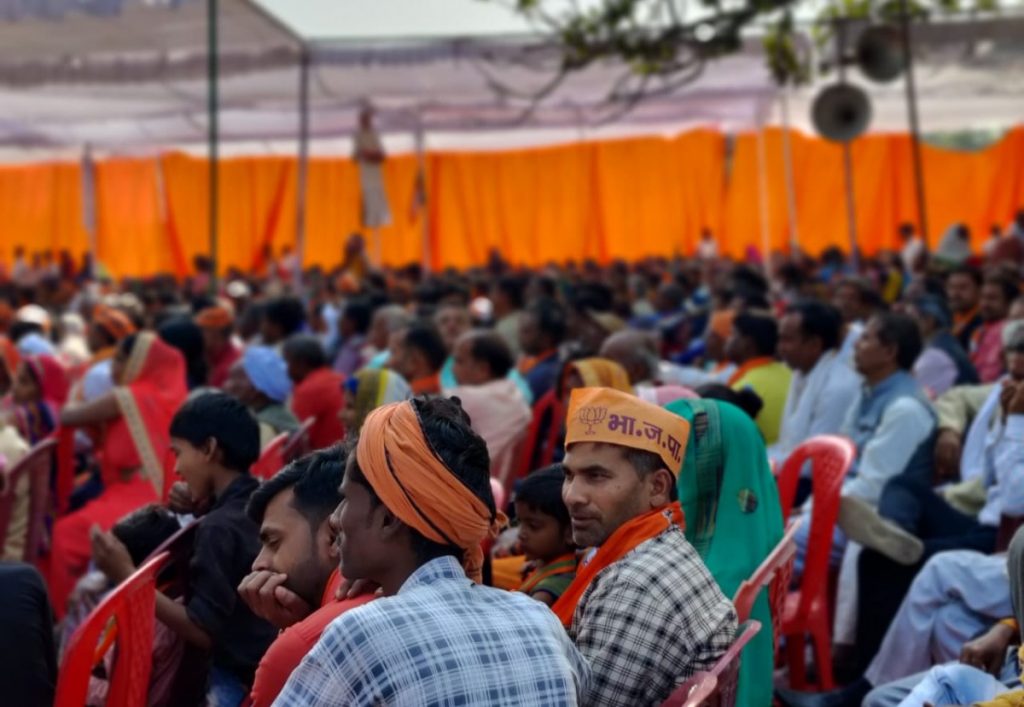 Will issues triumph over communalism?

The MSMEs include the lock industry in Aligarh, small traders of puja items in Ayodhya, carpet and brass industries in Mirzapur.

The Samajwadi Party’s campaign centred around people’s livelihood issues was successful in cornering the religious polarisation that the BJP sought to stoke.

Friday’s results are a litmus test of which political narrative attracted the electorate the most.