A leader who does not have the humility to apologise for genocide under his watch does not integrate. 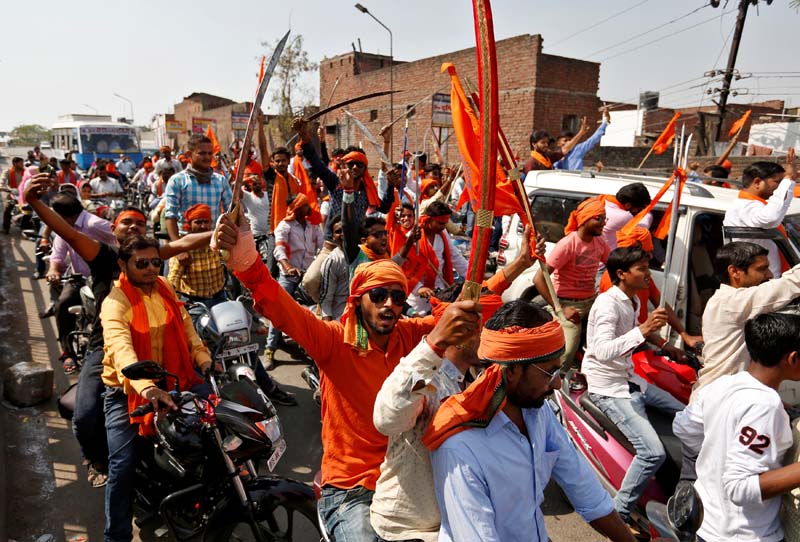 Hindu Yuva Vahini vigilante members take part in a rally in the city of Unnao, India, on April 5, 2017. Photo: Reuters/File

The classical musician T.M. Krishna received the Indira Gandhi National Integration Award in New Delhi on October 31. This is the text of his acceptance speech.

I stand before you accepting an award for having contributed to a conversation on national integration and hence before I bask in its glory I need to place on record the unevenness of my own citizenship.

I would like to believe that I am just another ordinary Indian. But I am not, certainly not. I am born into a privileged caste and class. I am English speaking and a culturally empowered citizen of this country. Whether I realise it or not and even if I am unable to accept its realness, this is a fact. And being a singer, in a tradition that is steeped in all these qualifications I become an emblem of what is being touted today as ‘Indian Culture’. I am a preferred-citizen. I may try to understand but will never, in my within, experience what it means to be a Dalit, Muslim or a tribal and will never be just another person on the street.

But my art, Karnatik music, has given me a gift. A gift of experience, a gift of empathy, a gift to sense life beyond my limitations. This experience made me realise that my art, my way of life, my beliefs, religion, practices, rituals and everything else that makes me who I am is just one dot in the grand universe of India.

It is art’s generosity that brings me here today.

The human being is a complex creature one part of which is designed to own, control, subjugate, discipline and dictate. But there is another beautiful side to us, the sensitive, empathetic and compassionate one. Right through our lives we vacillate between the two with each side winning a few bouts. But at a much deeper level, the environment we have created for ourselves moulds our intrinsic human-ness. And it is in this context that democracy becomes a vital, non-negotiable instrument – the instrument of humanity. Democracy lives in its spirit of intention – which is to make us all better human beings. It demands humanity from every citizen, community and government, and hence has not been and will never be easy. We have gone through times when we placed democracy under siege. Born in January 1976, I am a child of one of those difficult times.

But we did move ahead and beyond.

As I grew up in the 1980’s and early 90’s national integration was a significant part of my vocabulary. Leaders from across the political spectrum spoke about this with great vigour re-enforcing its centrality to India. In spite of the terrible violence that erupted at various times in different parts of the country, we seemed to recover and an inner consciousness in our civil society kept reiterating our togetherness. And in this context I must mention Prime Minister Manmohan Singh’s apology for the 1984 riots. This was a reflective and essential statement. Some detractors may say “it does not change anything”. It cannot change the past but definitely changes the future.

A leader who does not have the humility to apologise for genocide under his watch does not integrate.

But I say with regret that as we entered a new millennium this idea of national integration lost its sheen, it did not attract anyone’s attention, it did not matter anymore. It is also possible that we became over-confident, arrogant about the un-penetrability of our syncretic culture. We spoke much about development and soon national-integration became passé. In spite of socially equalising legislations such as the Right for Information Act of 2005 and NREGA we somehow forgot that if we do not remain caring of our people and vigilant of the dangers that lurked behind the scenes, we will enter times when who we are as a nation will be under serious threat.

And here we are today.

We are facing one of the greatest challenges posed to our democracy, constitution, plurality, citizenship and socialism. These corner stones of India are being subverted, dismantled, maligned and morphed right before our eyes. The methods being used are not secretive anymore, dissenters have been killed and all of us who resist are being warned of what is coming.

If there is anytime that national-integration needs to be brought back into public thought, it is today and there is no time to waste. And this integration is not just about religious minorities; it is as much about Dalits, Tribals, ethnic and linguistic minorities. The basic fabric of India is its cultures and if we allow that to be poisoned, we would have placed on the sacrificial altar our entire civilisational consciousness. The battle will be lost and we just cannot let that happen.

I will continue this journey of questioning, resisting, learning and discovering. And in accepting this award, I am just a conduit to creating more discourses on who we are as a country and where we want to be. I thank all those who have travelled this path and continue to inspire and mentor me in my seekings. In essence I am merely continuing in the tradition of India’s democratic thinkers, who believed in our good-ness.

Before I end I would like to render a few verses from a hymn that is part of Gandhi-ji’s Ashram songs. I hope we can keep these words in our hearts and expand its horizons.

T.M. Krishna is a classical musician and writer