JJP's Dushyant Chautala is confident that he will play kingmaker. However, he has been non-committal so far about which party he will support.

New Delhi: BJP won 40 seats, while Congress came a close second with 31 seats in Haryana. Amit Shah has indicated that his party will stake claim to form the next government with a hung verdict in the election. The BJP brass has been eager to call this a victory for the party, even though the lack of clear majority has taken all by surprise.

Emerging possible kingmaker at this juncture is Jannayak Janata Party, lead by Dushyant Chautala. The party has won 10 seats, but it is not clear whether Congress and JJP are intent upon an understanding.

Seven independent candidates have won, and the Indian National Lok Dal, the fountainhead of the JJP has secured just one seat. Haryana Lokhit Party too has won in a single seat.

In spite of reports saying Manohar Lal Khattar is scheduled to meet Governor Satyadev Narayan Arya later this evening to stake his claim to form the government in the state, early trends in Haryana have showed a major shift in vote shares.

The BJP appears to have slipped drastically from its whopping 58% vote share in 2019 Lok Sabha polls to around 35%. The drop of around 23 percentage points indicate that the BJP’s thrust on national issues like Centre move to dilute Article 370 over regional issues like employment and agrarian problems did not work much for it.

A party needs 46 seats to form the government.

Several Haryana ministers, including Ram Bilas Sharma and Captain Abhimanyu, and state BJP chief Subhash Barala were looking like they may lose their seats, as per Election Commission trends.

Haryana assembly speaker Kanwar Pal, a BJP legislator from Jagadhri, was also trailing in his constituency behind Congress’s Akram Khan but is now comfortably in the lead with 52,065 votes as opposed to Khan’s 43,520.

State BJP chief Barala also lost the Tohana assembly seat in the Fatehabad district by a margin of 43,122 votes to Jannayak Janta Party’s Devender Singh Babli. He resigned from his post on Thursday afternoon.

Former chief minister Bhupinder Singh Hooda exuded confidence on Thursday morning that the “Congress will get a full majority” and “we will form the government”.

Hooda, who is contesting from Garhi Sampla-Kiloi, has led the party’s charge in these polls and has won with a 65% share of votes from the constituency. Only about a month ago, he was made in charge of election management and the Congress Legislative Party.

The trends indicate that the BJP’s aspirations in the state are far from being fulfilled. The party, which won 47 seats in the 90-member House in 2014, went into the campaign with the slogan of “Abki baar 75 paar (This time over 75 seats)”. However, it appears to be stopping well short.

At the same time, the Congress seems to have gained a lot of ground when compared to both the 2014 assembly polls and 2019 parliamentary polls. It has increased its vote share by 10 percentage points, from around 20% to 30%, according to early trends. Its share may jump three percentage points if compared to the recent Lok Sabha polls. It had secured around 28% but now seems to be inching towards a 31% vote share.

The JJP, with more than 25% vote share, seems to gaining at the cost of INLD, which has been reduced to less than 3% votes – a drop of more than 20 percentage points compared to the 2014 assembly polls.

Given the possibility of a hung assembly, leader of the JJP Dushyant Chautala exuded confidence that the key to the next government will be with his party. However, he has been non-committal so far about which party he will support. “I believe neither BJP nor Congress will cross 40 seats and the key to the next government in Haryana will be with JJP. We will go with whoever would meet our promises to the people – of securing 75% jobs for youth of the state, of providing security to women, meeting needs of farmers,” he said.

Trends showed JJP in the lead in eight seats. Chautala said a meeting of the legislative party and national executive will be convened to take a call on who to ally with in the event of no party being able to form a government on its own. “All those who worked for the organisation in the last 11 months will be consulted,” he said.

Read more about the important candidates in Haryana here.

The election was fought on different issues by various political parties, most of whom have seen a lot of internal strife over the past five years. Voters responded well to the campaign and at last count, 68.47% of the 1.83 crore total cast their ballots. The electorate comprised 85 lakh women. While voting took place in a single phase on Monday, repolling in five booths was conducted on Wednesday.

BJP went into the elections on the twin planks of the Narendra Modi government’s performance at the Centre and the Khattar regime’s work in the state. As in the Lok Sabha polls and in Maharashtra, it tried to capitalise on the “nationalism” card once again. This time it equated the reading down of Article 370 in Jammu and Kashmir with “national pride”. Simultaneously, the party also claimed that Khattar has led an allegedly transparent, honest and corruption free government.

Though its campaign began with the slogan of “Abki baar, 75 paar” (‘This time over 75’) in the belief that it would get over 75 seats as against 47 last time, and though three of the exit polls have even given the party as many seats, no one would be surprised if it falls short of the target.

The campaign by the opposition, and that includes parties like Bahujan Samaj Party, Aam Aadmi Party and Swaraj India, which may not get the numbers but decided to contest on many seats, centred around all-round distress in the state. 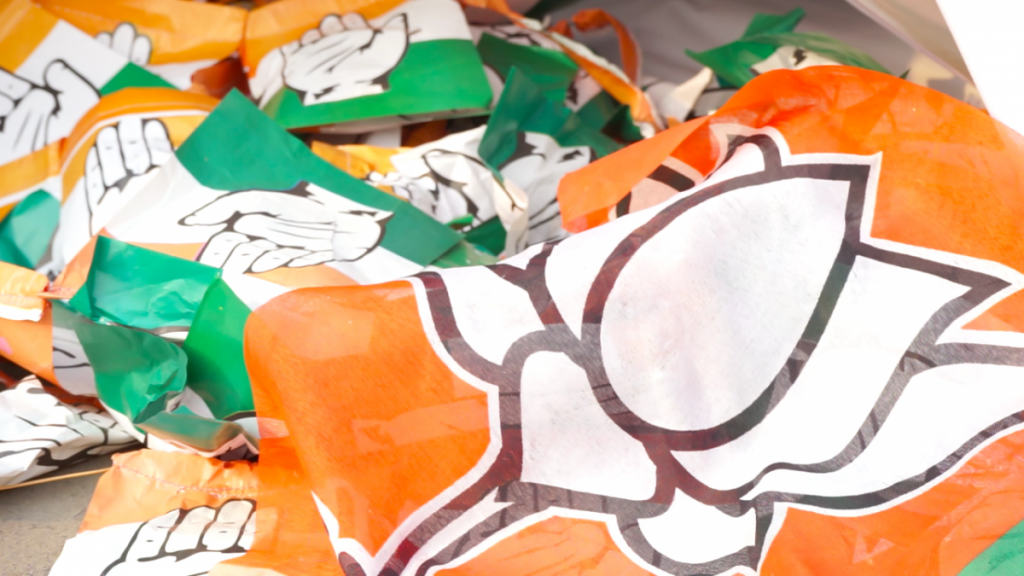 The question is less about BJP’s impending victory but more on how many seats it would get in Haryana. Photo: Harsh Chetwani

From farmers not getting minimum support price and compensation for losses, to traders suffering due to unprecedented economic slowdown and closure of industrial units, and on to youth suffering due to job losses and unemployment, which reached the highest levels in the country, the opposition campaign touched on ordinary people’s lives.

Also read: Congress Could Well Lose But Its Warning Against Crony Capitalism Resonates in Haryana’s Hinterland

The anger of Dera Sacha Sauda followers, whose head Gurmeet Ram Rahim Singh was convicted in two rape cases in 2017, with the government for firing on his supporters in Panchkula on the day of the court verdict could also impact the poll outcome in nearly 20 seats in and around Sirsa in west Haryana.

Congress, which for five years remained torn between former state president Ashok Tanwar and two-time former chief minister Bhupinder Singh Hooda, at the eleventh hour decided to back the latter. It replaced Tanwar with another Dalit leader, Rajya Sabha MP Kumari Selja, and made Hooda the election campaign in-charge and its legislative party leader.

Hooda is believed to have had the main say in distribution of tickets and brought in a number of senior leaders who had been sidelined by Tanwar, a leader picked by Rahul Gandhi to lead the party.

With Hooda coming in, the biggest single community, the Jats, were somewhat placated by the party and their support for Congress could prove crucial as it seeks to improve its vote tally from 15 in the 2014 polls. Also many of them view the Khattar government as one which speaks more for the 35 other communities than them.

However, within a short span, former MP Dushyant has been able to get himself counted as one of the biggest prospects from the state.

Meanwhile, INLD leader Abhay Chautala was attacked by opposition parties for “helping” BJP, a charge he would find hard to contest especially since his candidate against Khattar in Karnal did not turn up to file his nomination.

Most exit polls gave BJP a sweep, except one

BJP, which won over 32% votes in the 2014 assembly elections, and over 58% in the Lok Sabha elections is hoping that most of those who turned up to cast ballots would give it another chance. It would want the real result to the closer to the “poll of polls” which gave it 69 seats, the Congress 11 and others 10 seats.

On the other hand, the India Today-Axis My India exit poll would have given the opposition, especially the Congress, much to cheer about. It gave BJP 32-44 and the Congress 30-42 indicating that other parties like JJP may end up playing the role of kingmakers.