Taking Telangana Back to Feudalism

Like the Nizam's rule in Hyderabad under the British Raj, K. Chandrasekhar Rao is trying to woo the BJP in hopes that he will be able to lord it over Telangana as long as he promises suzerainty. 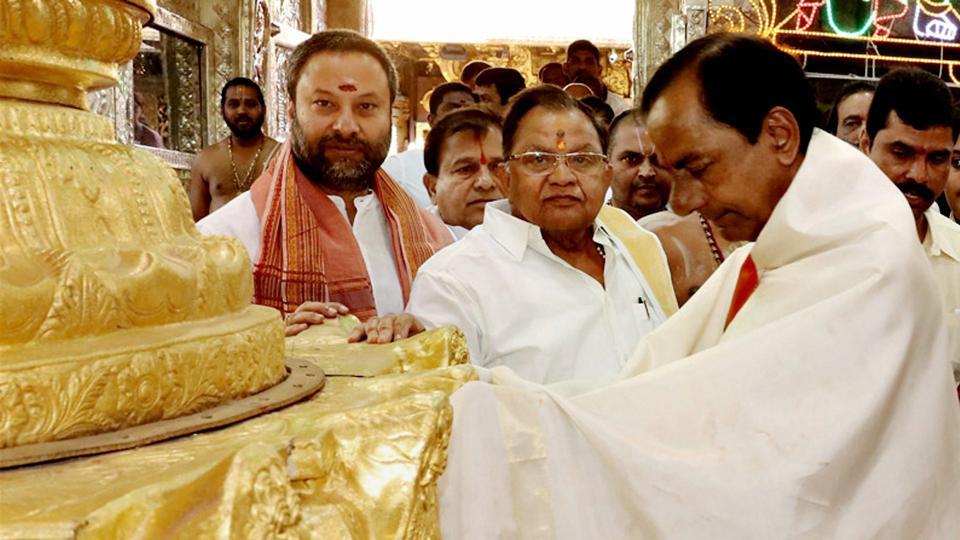 Telangana CM K. Chandrasekhar Rao with TTD officials after donating ornaments worth Rs 5 crore at the golden holy flag mast of the temple of Lord Venkateswara at Tirumala in Tirupati. Credit: PTI/Files

Hyderabad: A huge number of temples across Telangana are run by the state government and this includes the Shreerama Temple at Bhadrachalam. On Ram Navami, which was earlier this week, the usual practice is for the chief minister – even when the state was a part of Andhra Pradesh – to visit the temple and present new clothes to the deity. But this time, chief minister K. Chandrasekhar Rao (KCR) gave it a miss, leaving it to his teenage school going grandson to stand in for him – presenting the pattu vastralu to the deity – and causing much consternation in the process.

“The Nizamate was abolished in 1948 and the Nizam was deposed. But the creation of Telangana has created a neo Nizam,” says K.J. Reddy (name changed), an officer of the Telangana government. “He is doing everything in his power to create an autocratic state where the basic rights of citizens are overlooked,” says political activist Kodandaram, who is fast emerging as a focal point of opposition to KCR. Kodandaram, who was part of the Telangana movement, is especially piqued that the KCR dispensation has ‘abolished’ the ‘dharna chowk’ (the Jantar Mantar equivalent in Hyderabad) where all protests were organised. The government has proposed that the dharna chowk be moved to the outskirts of the city, in what is seen as a growing sign of intolerance. Less than a month ago, cops barged into the home of Kodandaram at 3 am, broke his front door and arrested him because he was to lead a rally next morning.

In KCR’s raj, all powers are concentrated with him and the rest of the cabinet ministers are virtually ciphers with little say in policy making and decision taking. As an example, anecdotal stories suggest that the home minister does not have powers to transfer even a police constable. Only KCR’s son, K.T. Rama Rao and nephew Harish Rao – who hold important cabinet portfolios – have some power, although they too are used for specific missions by the chief minister. KCR’s daughter K. Kavita, who is a MP, is the only other mover and shaker around. Officers say that they tender no advice to the chief minister because from experience they know that advice is “not welcome.”  A senior officer said: “So we keep shut.”

KCR owns a huge farm house not more than 35 km away from the city. Often, he withdraws to the farm house, where he remains camped for prolonged periods. Stories suggest that it is impossible to contact him during this time. In some instances, even ministers who came to call on him were turned out without being able to meet the chief minister. What is better known is that KCR has had a palatial building constructed next to the earlier chief minister’s residence. The spot was zeroed in on vaastu (astrological) considerations and houses in an officers’ colony nearby were razed. The officers – many of them from the IAS – had to run helter-skelter looking for alternative accommodations.

It is not merely ministers who are at the receiving end. KCR has closed the doors on all associates who were part of the Telangana movement. He refuses to acknowledge all those who fought for Telangana. “We were all part of social groups that strove for Telangana, but being head of a political outfit, he was able to take all the credit for making the new state possible,” Telangana activists have complained.

For those who came in late, Telangana was granted by the Sonia Gandhi-led Congress dispensation. But all the mileage was taken by KCR, who in the run up to the creation of the state called on Sonia with his entire family, hailed her as his mother and offered to merge his party into the Congress. Analysts said that Sonia could never match KCR’s political maneuverings and was left high and dry.

After Telangana was created, KCR successfully kicked out Chandrababu Naidu’s Telugu Desam Party (TDP), which was well entrenched in the new state. Party MLAs were encroached upon and even made ministers – in contravention of the anti-defection laws. The speaker of the assembly sat on the resignations by the TDP MLAs and the high court refused to rule on the infinite time taken for this. A tape with conversation to purchase TRS MLAs (the voice alleged to be that of Naidu) put the TDP on the back foot. In the meanwhile KCR pressed his son, newly returned from the US, to woo investors and the so called ‘Andhra capitalists’ against whose ‘occupation of Hyderabad’ the whole Telangana movement was directed. Thus, many analysts feel that once Telangana was created, it is all back to business with the same guys lording over, once again.

KCR may have turned into a Nizam, but he is highly popular among the masses. Three years after the creation of the new states, the backward communities still swear by him. This is courtesy the large number of sops that KCR has given/promised them, including to shepherds, barbers, weavers, fishermen and potters. In the Telangana budget for 2017-18, unveiled less than a fortnight ago, sops worth more than Rs 10,000 crore were unveiled by KCR. Political analysts point out that these communities are OBCs or most backward communities (MBCs). In a move that will gladden Muslims, KCR has also said that he will shortly introduce a 12% reservation for them in jobs and admissions to educational institutions.

Although now opposition is emerging from the hitherto powerful and resourceful Reddy community, KCR is still confident of continuing with his popularity because the BJP, the new numero-uno party in the country is unable to make any headway in the new state. Although BJP president Amit Shah is expected to visit Telangana to ramp up the low key BJP unit here, political analysts suggest that KCR is professing loyalty to Narendra Modi, in the same fashion that he did with Sonia Gandhi. Apparently KCR is communicating to Modi that his party will be part of NDA if required and will support their nominee for the presidential and vice presidential elections. KCR’s strategy is to accept New Delhi’s suzerainty if he is allowed to have a free run in Hyderabad. This is quite like the Nizam’s rule where the British allowed the potentate to lord over his state in lieu of support for the Empire.