Mamata Banerjee said she would work with other opposition parties to topple the BJP government and the alliance's prime ministerial candidate would be decided after the polls.

New Delhi: A host of opposition leaders criticising the BJP’s ‘politics of hate’ called for unity ahead of the Lok Sabha polls. Leaders from as many as 22 parties were present at the ‘United India Rally’ in Kolkata, organised by West Bengal chief minister Mamata Banerjee.

Issuing a war cry ‘Delhi mein sarkar badal do‘ (change the government at the Centre), Trinamool Congress supremo Mamata Banerjee said the “expiry date” of the Modi government is over and a united opposition will win the coming general elections.

She promised to work with other opposition parties to topple the BJP-led NDA government. She said the prime ministerial candidate of the opposition would be decided after the polls.

Claiming that BJP’s days at the Centre are numbered, she criticised the BJP for not having “courtesy in politics”. Banerjee also claimed that the BJP does not respect many of its own senior leaders. She said Rajnath Singh, Sushma Swaraj and Nitin Gadkari are ignored in the saffron party.

“Modi and his associates are now talking of collective leadership, but if the BJP wins the Lok Sabha polls these leaders will be ignored again,” she said.

Calling the present situation in the country a “super Emergency”, the West Bengal chief minister raised the slogan of ‘Badal do, badal do, Delhi mein sarkar badal do‘ (change the government at the Centre).

Kumaraswamy criticised prime minister Narendra Modi and questioned him for the BJP’s attempts to poach MLAs from the Congress-JD(U) combine in Karnataka. Andhra CM Naidu said the Modi government failed on all fronts. “They (BJP) have been misusing all the constitutional institutions of the country,” Naidu said, adding that the opposition parties have joined hands to “save the country and democracy”. 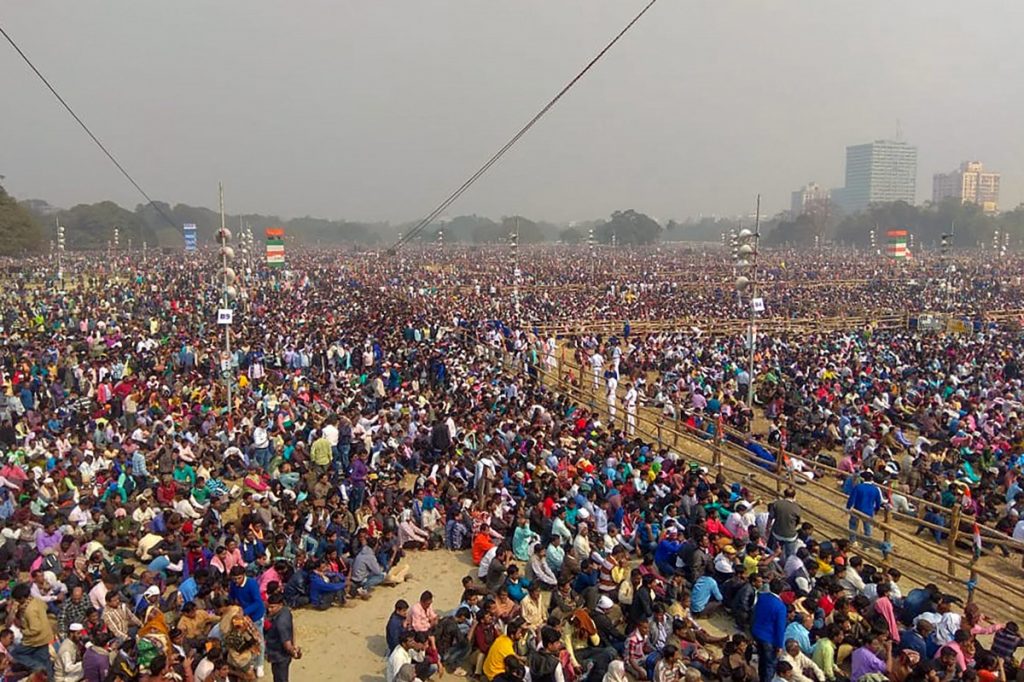 People in attendance at the Kolkata rally. Credit: PTI

Former BJP leader Arun Shourie on Saturday asked the opposition to work together to “throw out the BJP government” at the Centre in the coming Lok Sabha polls. The opposition parties should pitch only one candidate against the BJP contestants across the country to win the polls, he said.

Senior Congress leader Abhishek Manu Singhvi on Saturday hailed the TMC’s mega opposition rally and said the alliance would aim to defeat the BJP and form a secular government.

Leaders from all major parties except the BJD and the CPI(M)-led Left front participated in the rally.

DMK leader Stalin reminded people of Modi’s promises such as transferring Rs 15 lakh to everybody’s account? “Has he done this? This is a corporate government, and it’s being run like a private firm,” he claimed. Stalin also criticised the Centre over the alleged Rafale scam.

National Conference chief Farooq Abdullah said EVMs were being used to manipulate the outcome of elections. “The EVMs are chor (thieving) machines. All countries are moving away from this system. We need to bring back paper ballots,” he said. He accused the BJP of “dividing people on the basis of religion”.

Zoram Nationalist Party leader Lalduhawma on Saturday said the north east is “burning” because of the Citizenship (Amendment) Bill.

“If the Bill was enacted … India will no longer be the place that it used to be … so we want a secular government at the Centre,” he said.

According to reports, the TMC claims that over 40 lakh people will attend the rally. Police estimates say that the Brigade Parade ground can hold around 7 lakh.

A host of leaders addressed the rally in Kolkata. Credit: PTI

Senior BJP leader Shatrughan Sinha also made an appearance at the rally and joined the criticism of BJP and PM Modi. He asked the Centre to come clean on the Rafale deal and said if the PM does not answer questions on the issue, people would say “chowkidar chor hai” (the watchman is the thief).