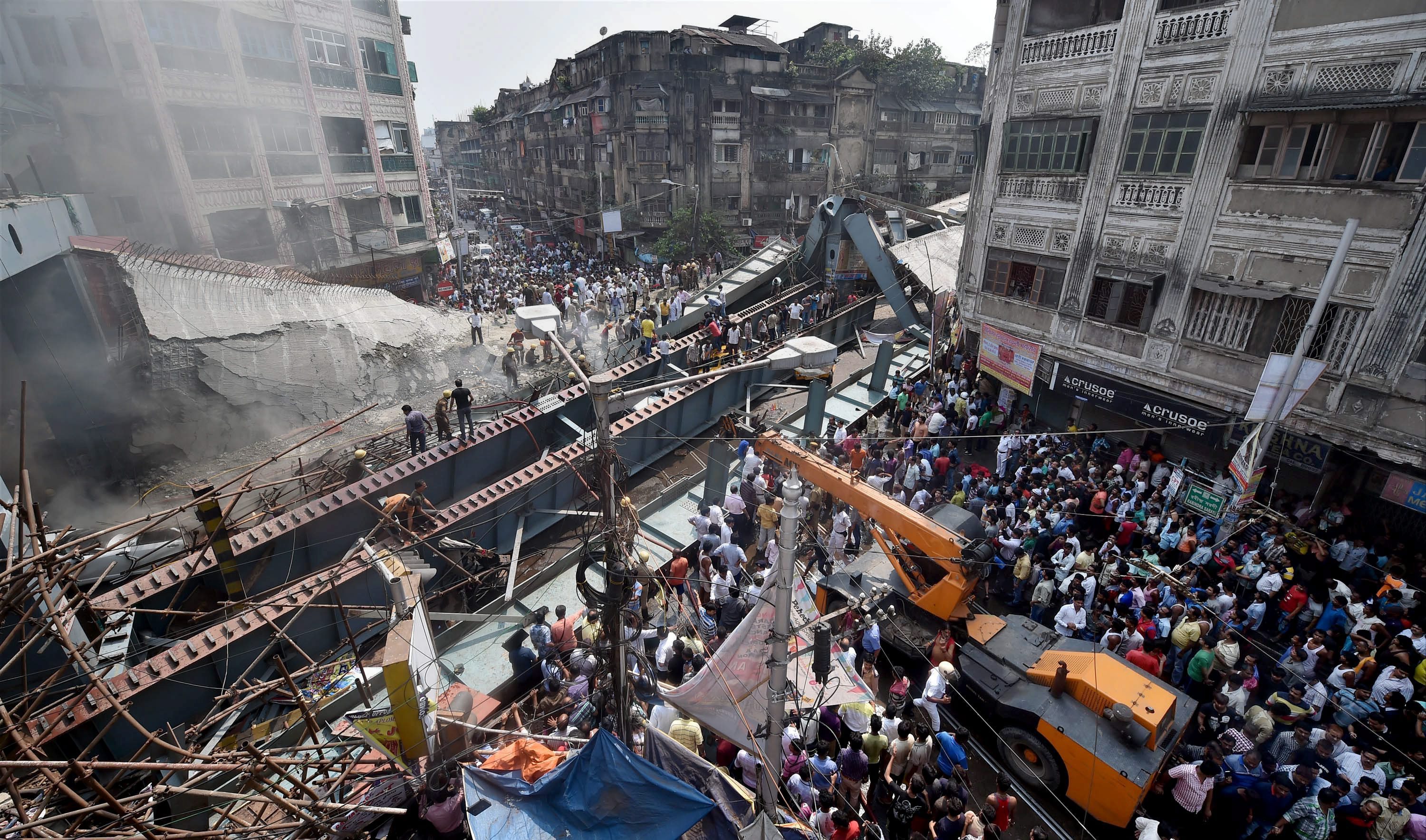 Kolkata: At least 23 people have been killed and over 80 others injured as a portion of an under-construction flyover collapsed in Kolkata’s Burrabazar area. Over 100 people are thought to be trapped under the debris, according to eyewitnesses. Rescue operations were conducted through the night, with army personnel working alongside forces from the National Disaster Response Force, state disaster management, city police and fire brigade.

The Kolkata police has sealed the local office of Hyderabad-based IVRCL group, engaged in the construction of the flyover, and has filed an FIR against the company.

Casualties: At least 23 people are believed to have been killed in the accident and 80 others have been injured. Locals estimate that over 100 people remain trapped under the debris. Officials expect the numbers of casualties to rise.

Rescue operations: Around 300 army personnel, alongside personnel from the National Disaster Response Force, state disaster management, city police and fire brigade, conducted rescue operations through the night. Cranes, drilling machines and gas cutters are being used in the operations, as are heat sensors, to help locate those trapped.

Official response: Chief Minister Mamata Banerjee cancelled her election campaign in West Midnapore district and rushed back to the site of the accident to oversee rescue efforts.

“The guilty will not be spared. Our main focus right now is rescuing those trapped,” she said.

Prime Minister Narendra Modi, who is in the US for the Nuclear Security Summit, has been briefed about the flyover collapse and rescue efforts by Home Minister Rajnath Singh.

Had a telephonic conversation with the PM and apprised him of the rescue operations being carried out by the NDRF in Kolkata.

Shocked & saddened by collapse of under construction flyover in Kolkata. Took stock of the situation & rescue operations.

The flyover: IVRCL was appointed by the Kolkata Metropolitan Development Authority to build the two-kilometre flyover on the Vivekananda Road in north Kolkata in 2007, according to the firm’s website. Construction began in 2009 and had missed several completion deadlines, with August 2016 the latest scheduled deadline.

Action: IVRCL’s local office has been sealed by the Kolkata police. An FIR has been registered under IPC sections 304 (punishment for culpable homicide not amounting to murder), 308 (attempt to commit culpable homicide) and 407 (criminal breach of trust by carrier, etc), reports Firstpost.

A five-member team of the Kolkata police has reached Hyderabad and has questioned IVRCL officials, according to ANI.

What we don’t know

Death toll: Although rescue operations underway, getting survivors to hospitals was complicated by the lack of access to the congested area, surrounded by buildings on either side. Over a 100 people are thought to be trapped under the debris, and the death toll is likely to rise.

Cause: Although the cause of the collapse is yet to be determined, many are speculating that a rush to complete the severely-delayed project may have led to shoddy construction.

“The government wanted to complete the flyover before the elections and the labourers were working on a tight deadline … Maybe the hasty construction led to the collapse,” said Ravindra Kumar Gupta, a local who assisted in rescue efforts.

Meanwhile, IVRCL’s director of operations, A.G.K. Murthy, has said they were not using inferior quality materials for the flyover and will cooperate with investigations.

Responsibility: The ruling Trinamool Congress was quick to blame the previous Left Front government for the incident, as construction of the flyover began while it was in power.

“The tender was passed in 2009 by the erstwhile Left Front government and was given to Hyderabad-based IVRCL Construction,” said Banerjee, adding that the company had not provided the government details of the construction plan despite several reminders.

For developments on the story

Reuters’ report on the incident