In Kolkata, BJP has paid little heed to the tradition of pandals focusing on contemporary politics but instead claimed that the footwear in a pandal is an insult to the goddess. 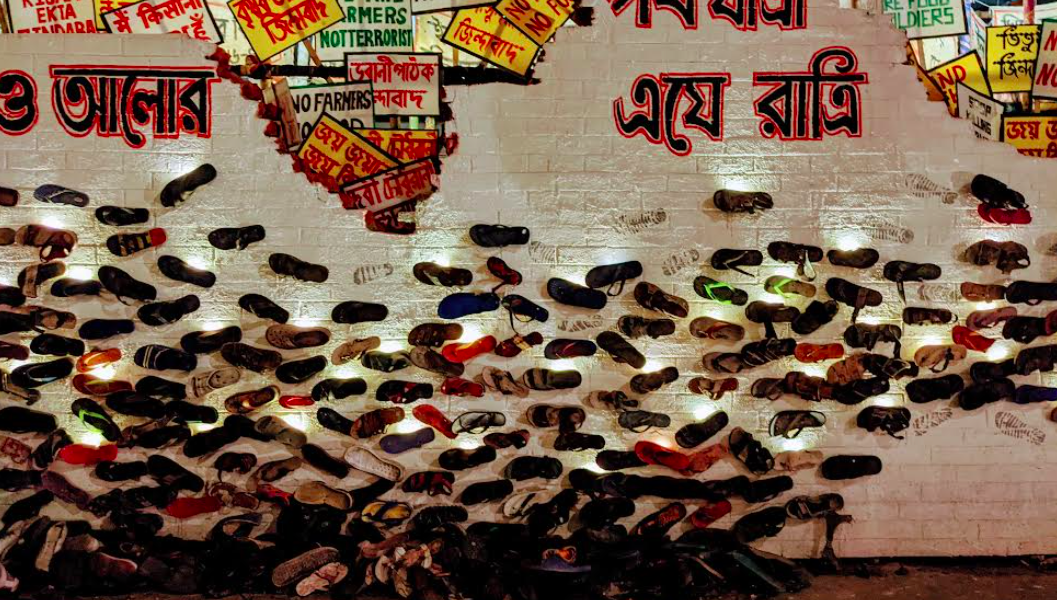 Hundreds of sandals can be spotted on the ground which symbolise the scenes from an agitation where protesters lose their shoes in stampedes due to police action. Photo: HImadri Ghosh

Kolkata: On the evening of Saturday, October 9, Prithvijoy Das, a Kolkata-based lawyer closely associated with Bharatiya Janata Party, sent a legal notice to the organisers of a Durga Puja committee in Kolkata’s Dum Dum Park area for allegedly “hurting religious sentiments” by using slippers to decorate a festival pandal.

“It has been found that Dum Dum Park Bharat Chakra Durga Puja Committee has decorated the sacred ‘Durga Mondop’ with footwear…such a manifestation of ideas by the said puja committee is enough to injure and deprave the religious feeling of any devotee and true belief. That I, being a “Sanatan Hindu”, cannot convince my mind with, and accept, these perverted ideas and thoughts that hurt my religious feelings and holy beliefs,” reads the legal notice.

A day later, another Kolkata-based lawyer Shantanu Singha lodged a First Information Report (FIR) at Lalbazar, the police headquarters, against the same organisers. Meanwhile, Vishwa Hindu Parishad’s south Bengal spokesperson Sourish Mukherjee told reporters that VHP will launch a protest in front of the puja pandal during the festival itself. 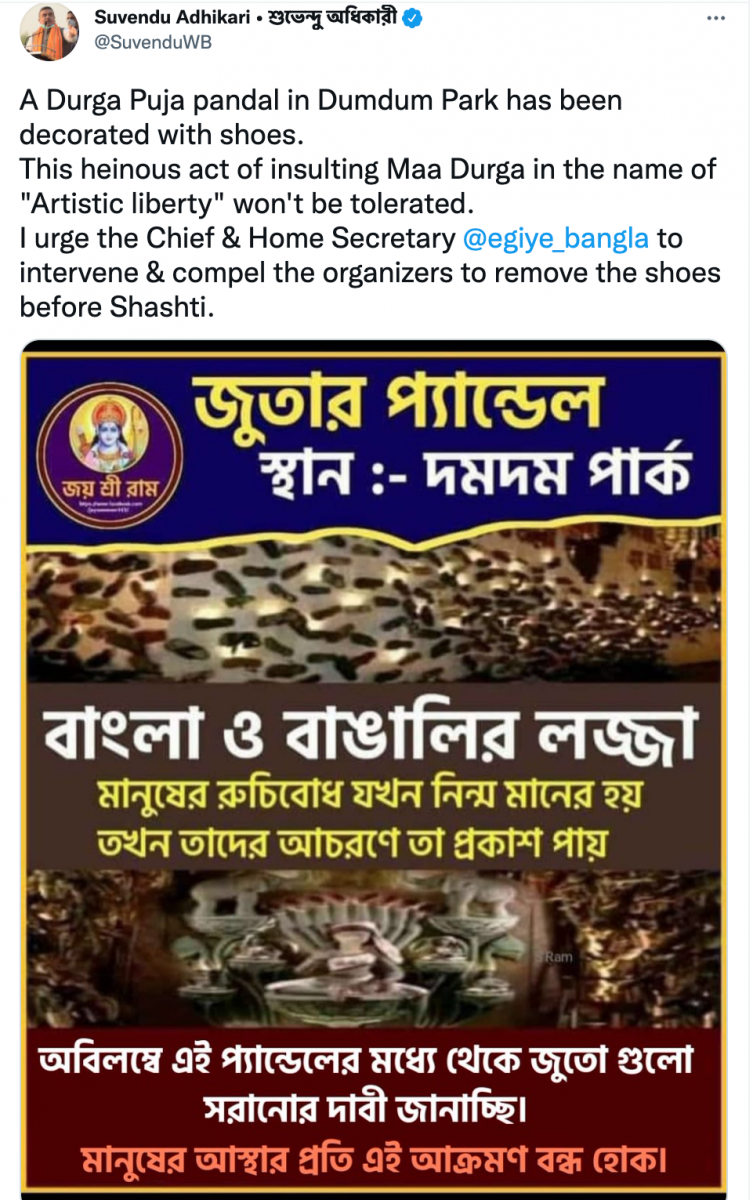 Soon after, leader of opposition of West Bengal assembly, Suvendu Adhikari tweeted saying, “A Durga Puja pandal in Dumdum Park has been decorated with shoes. This heinous act of insulting Maa Durga in the name of ‘Artistic liberty’ won’t be tolerated. I urge the Chief & Home Secretary to intervene & compel the organisers to remove the shoes before Shashti (ritual commencement day).”

BJP leader and former governor of Meghalaya, Tathagata Roy, told reporters on Saturday, “Everything won’t be tolerated in the name of artistic freedom. This is a grave insult to goddess Durga and hurts our religious sentiment”.

These developments have come while Bengal was preparing for its biggest annual festival. While last year saw a lull induced by COVID-19 concerns, this year, the state has been eager to observe the week-long festival in grand spirit. Advertisement boards have plastered half of Kolkata and loudspeakers hanging from treetops have been blaring songs and sounds of the festive drum or dhaak nonstop. The bigger community pujas have been inaugurated and are thrown open to the public already.

The pandal at the eye of this storm was commissioned by the Dum Dum Park Bharat Chakra Durga Puja Committee, an association known for showcasing great pieces of art and craftsmanship through their pandals. They themed this year’s puja pandal on the ongoing farmer’s agitation.

A massive art installation portrays the plight of farmers who have been protesting against the farm laws for nearly a year. The committee has also sharply criticised the recent violence in Uttar Pradesh’s Lakhimpur Kheri that left eight dead, including four farmers and a journalist.

A tractor full of gunny bags greets visitors at the entrance. Outside the main pandal, on the right side, hundreds of sandals, some torn, some in proper shape, can be spotted on the ground. These symbolise a common scene from agitation spots in the aftermath of police action, when protesters have no option but to run leaving their footwear behind. 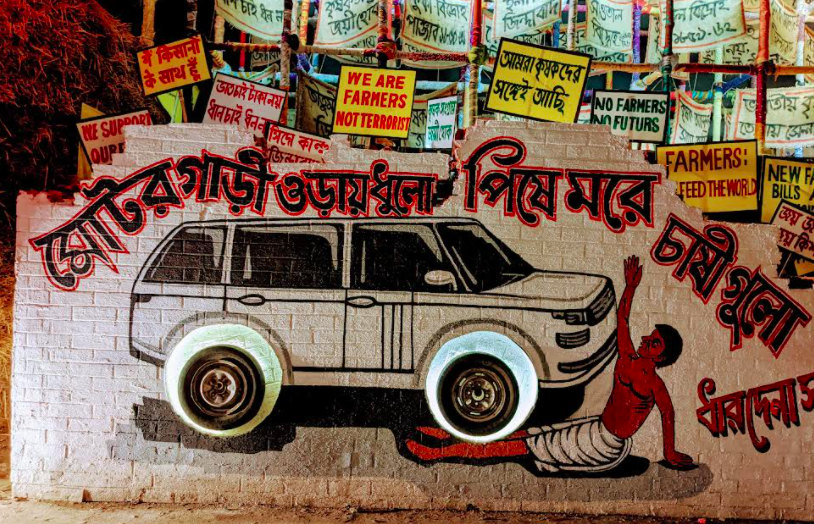 A graffiti of a car and farmer lying on its path can be seen at Dum Dum Park Bharat Chakra Durga Puja pandal. Photo: Himadri Ghosh

Posters with legends like “no farmer no food”, “new farm bills are suicidal”, “jai jawan jai kisan”, and “we are with farmers” line the walls. There is also a nod to history – the rebellion by tribals in 1831, the Tebhaga movement, etc.

As one moves towards the main pandal, the graffiti of a car and farmer lying on its path can be seen. The caption says, “Motorgari uray dhulo, niche pore chashigulo. ‘Cars speed away raising dust, farmers come under the wheels.’

The main pandal, with the idols, depicts a heap of paddy, sacred to farmers.

Speaking to The Wire, Anirban Das, the artist who conceptualised the piece, said, “Art always speaks of the times we live in. We have done exactly that, nothing extraordinary. For years now, Durga Puja pandals in Kolkata are depicting various contemporary socio-economic and political issues. This is nothing new.” Posters like “No Farmer No Food”, “New Farm Bills Are Suicidal”have mastered the walls. Cutouts of rebellion by the tribals in 1831, Tebhaga movement can also be seen. Photo: Himadri Ghosh

Reacting to the legal notice and FIR, club general secretary Pratik Choudhury said, “A section of people are just distorting facts to malign our puja. A morphed photograph was posted in social media, which shows sandals were installed above the Durga idol. This is completely baseless. Sandals which we have installed here are 62 feet away from the Durga idol. Farmers who provide us food are staging protests against the three farm laws for a year now. So many of them were martyred. We are telling their story.”

Choudhury adds, “We will not be changing the pandal or removing anything because of this false propaganda which is clearly done with political intentions.”

For decades now, Durga Puja pandals in Kolkata have focused on various socio-economic and socio-political themes.

From cinema to politics, issues like like global warming, climate change, use of plastics, the advantage of recycling, necessity of education for all, the need for affordable healthcare have been some of the mainstays for pandals, along with the focus on indigenous art. 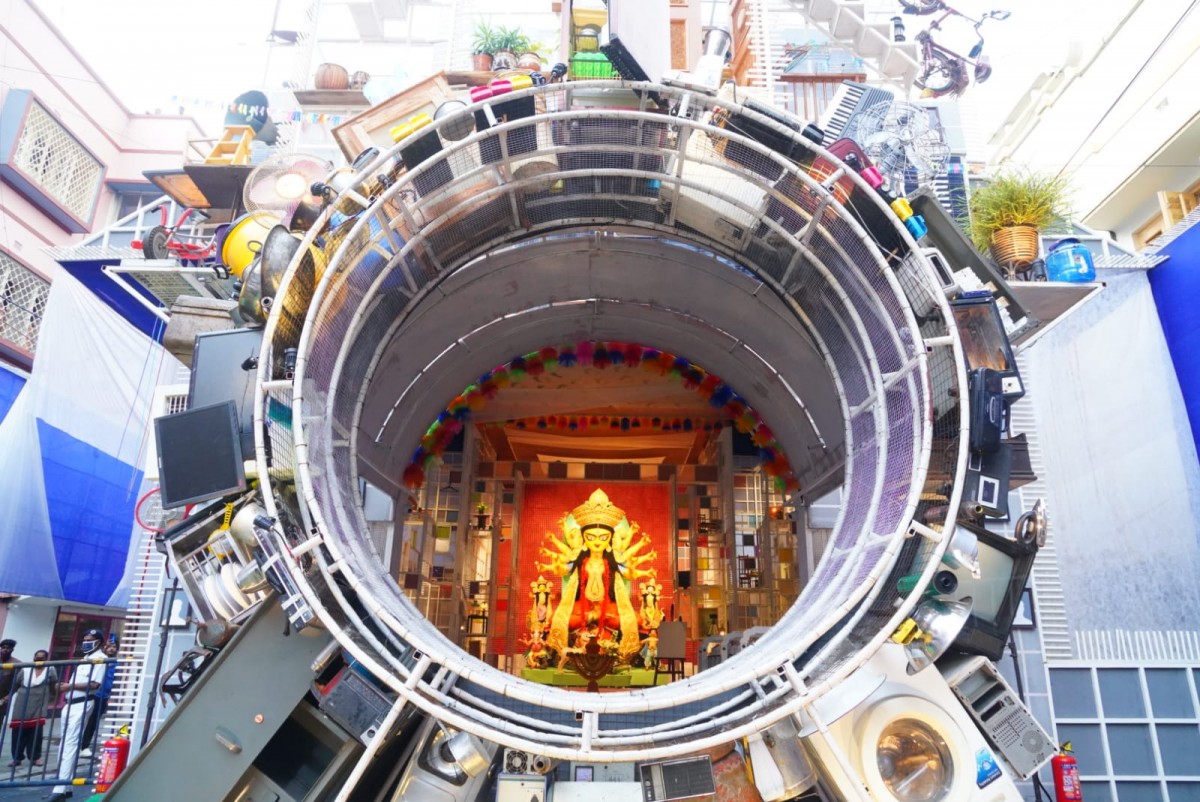 South Kolkata’s Barisha Club chose the National Register of Citizens (NRC) as the theme for its pandal this time.

The pandal shows goddess Durga as a mother who is being taken to a detention camp near the India-Bangladesh border. Barbed wires, check-posts, and daily belongings feature as well. 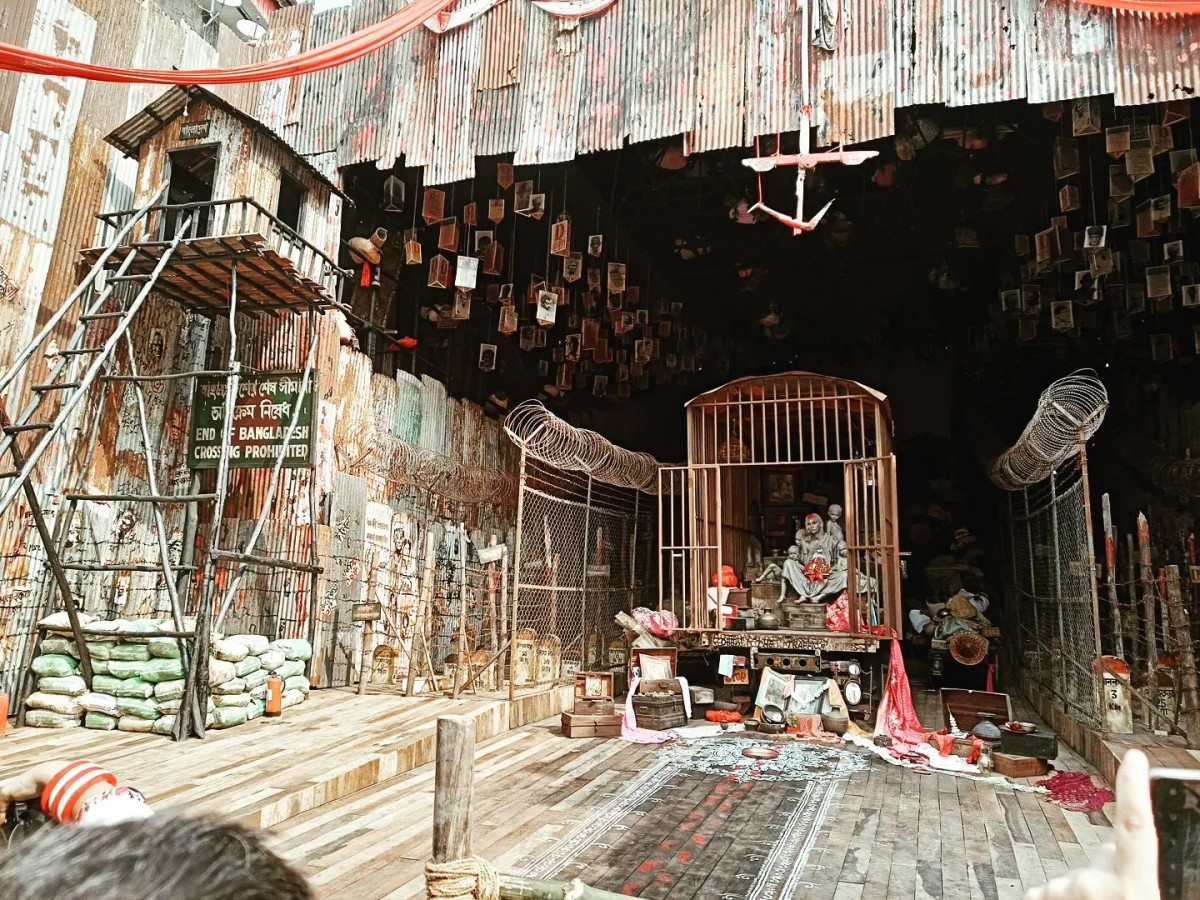 The Barisha Club Durga Puja pandal with the National Register of Citizens (NRC) as their theme. Photo: Himadri Ghosh

Club member Debashish Bose says, “The theme depicts plights of the people, who suddenly became stateless, even though they have been residing in the country for generations.” Last year, this club’s pandal was themed on the migrant crisis with Durga represented as a migrant worker.

A section has also criticised this pandal for depicting Durga inside a detention camp.

Kolkata based photographer-filmmaker, Ronny Sen, wrote a post on social media in 2017:

“This is what Calcutta was all about. I was shooting an assignment during the Pujo last year where I had found a little mosque as a part of a Pujo pandal at 66 pally. Everything was two dimensional and had things which were 66 years old as the city looked back then. It also had this one, the Nakhoda Masjid. Having a Hindu goddess inside many things including a mosque was so cool. Something an Australian journalist had told me while working on a story about Mother Teresa that in Syria in Damascus the ancient mosque was actually inside a very big church compound. Anyways, in these terrible times, we are living in things like 66 Pally were really nice…”

Once exclusive to the houses of rich zamindars, community pujas have been marked by a coming together of people and a pooling of resources. The transition from shabeki (or traditional) pujas to theme-based puja also witnessed brickbats from sections of Bengalis. But no amount of resistance could significantly  hold back the evolution of the Durga Puja.

Which is why, the BJP’s reaction to a quaint Puja trait has appeared out of place.

Journalist Sreya Chatterjee tweeted saying, “For some of us who have grown up celebrating Durga in their homes, she is more family than God. Every year we take turns to gift her “Pujor Saree” and Panchami is when she is presented with her attire. For us in Bengal, Maa is our own. We don’t fear her, we love her. The unnecessary controversy on how Bengal celebrates Durga Pujo should stop.”

Notably, the Durga Puja in Bengal has never been the exclusive domain of Hindus and signifies the coming together of all religions. Notwithstanding this cultural fact, BJP, for the past few years, has campaigned far and wide in Bengal with the allegation that Mamata Banerjee-led TMC government does not allow Hindus to worship Durga in the state.

However, this year, until two weeks ago, the former state president of BJP Dilip Ghosh and the recently appointed new president Sukanta Majumdar had been trading barbs on whether BJP should continue organising a Durga Puja or not.

Last week, state vice-president Pratap Banerjee told reporters that they are organising Durga Puja this year also and either Amit Shah or party national president J.P. Nadda will inaugurate it this time. But The Wire can confirm that none of the leaders are inaugurating it. Unlike last year’s extravaganza, this year’s BJP Puja appears to be a low-key affair.

Speaking on the current discourse, senior Kolkata journalist Rajat Mondal says that the Rashtriya Swayamsevak Sangh had long ago “admitted that it was not convenient for them to accept the kind-hearted humanitarian side of Bengalis.”

“Recent election results proved that BJP’s religion-centric politics has no life in West Bengal. Still, they are constantly engaging in this kind of discourse as they have nothing to offer other than hard-line Hindutva. Last year, they constantly harped that the current state government doesn’t allow Durga Puja to take place in Bengal. This year, we see another desperate attempt by BJP to defame our culture and dehumanise Muslims. This is nothing but their attempt to get media publicity,” he adds.