A dispute over whether RSS chief Mohan Bhagwat should have been allowed to hoist the national flag at a school in Kerala has morphed into questions over whether appropriate flag protocol was followed. 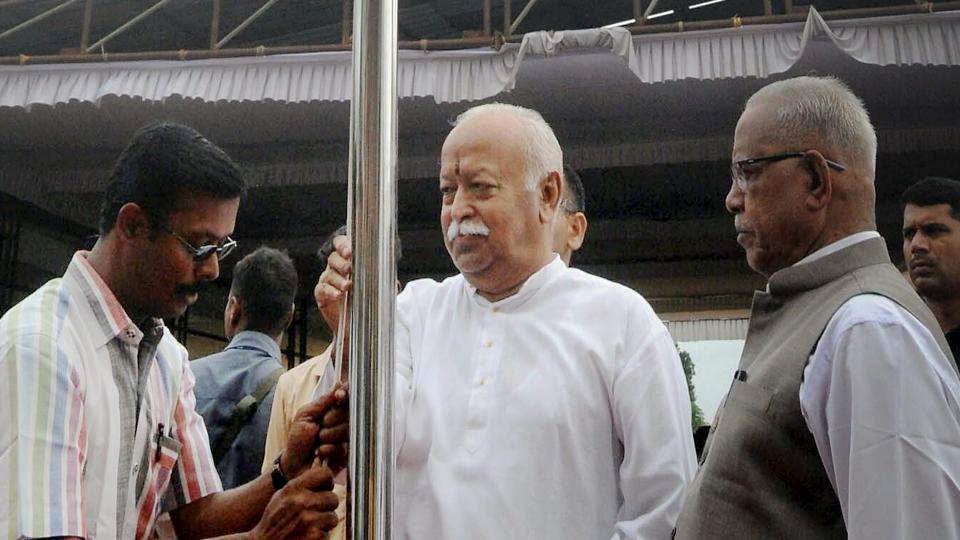 RSS chief Mohan Bhagwat unfurls the national flag at a school on the occasion of 71st Independence Day in Palakkad. Credit: PTI

The Rashtriya Swayamsevak Sangh’s (RSS) tryst with the Indian national flag dates backs to August 14, 1947. When the entire country was basking in the jubilation of freedom, the Sangh’s mouthpiece categorically discarded the tricolor, declaring that Hindus would never respect it.

“The people who have come to power by the kick of fate may give in our hands the Tricolour but it will never be respected and owned by Hindus. The word three is in itself an evil, and a flag having three colours will certainly produce a very bad psychological effect and is injurious to a country” said the Organiser at the time.

The national flag always stood between the nation India and the organisation RSS as it never recognised it as the symbol of a country they believed in.

In Bunch of Thoughts, RSS ideologue Madhav Sadashiv Golwalkar wrote, “Our leaders have set up a new flag for the country. Why did they do so? It just is a case of drifting and imitating…Ours is an ancient and great nation with a glorious past. Then, had we had no flag of our own? had we had no national emblem at all these thousands of years? Undoubtedly we had. Then why this utter void, this utter vacuum in our minds.”

It was obvious that what he implied here was that the national flag of Bharat (Not even India) should be the saffron split flag, Bhagwa Dwaj. The last time the RSS hoisted the Indian tricolor at its Nagpur headquarters (before 2001) was in January 26, 1950, that too as a condition imposed on it by Sardar Vallabhbhai Patel for lifting the ban imposed on the organisation after the assassination of Mahatma Gandhi. In the preconditions for lifting the ban, the-then home secretary HVR Iyyengar had wrote to MS Golwalkar that “an explicit acceptance of the national flag would be necessary for satisfying the country that there are no reservations in regard to allegiance to the State”.

Golwalkar who had by then “stopped all the correspondence with the Government” wrote a letter to Bharatiya Jansangh leader Pandit Mouli Chandra Sharma who had been acting as a mediator between the home minister and the RSS ideologue, that “like every other citizen of India every Swayamsevak of the Sangh is loyal to the country, its Constitution and all the emblems of India’s national independence and glory. The flag is such an emblem and it is, as has been stated before, the proud duty of every Swayamsevak as of every national of India to stand by this flag and keep up its honour”.

But it took 51 long years, when three men from an organisation Rashtrapremi Yuva Dal forcibly hoisted the national flag at Nagpur.

Seven decades down the lane, on August 14, 2017, the headmaster of Karnakiamman school, where RSS supremo Mohan Bhagwat was slated to hoist the tricolour  the next day, received a letter from P. Marykkutty, the district collector of Palakkad, asking him to stop it.

The collector had pointed out a report by the intelligence ADGP of the state and a concerned government directive for the Independence day celebrations. The government directive, which was based on the intelligence report on Bhagwat’s programme,  stated that none other than some elected representatives or the head of the institution should hoist the flag in any educational institutions.

BJP took the matter to the Rashtrapati Bhavan by lodging a complaint against the district administration for trying to disrupt the Independence day function.

Later, defying the collector’s instruction, the RSS chief did hoist the flag in the school, which is situated in a stronghold of the RSS and the BJP. The local Sangh Parivar leadership dared the CPI(M)-led government to take action against them. But the episode did not end there.

CPI(M) leader and MP from Palakkad, M.B Rajesh, went on to say that the function was not held according to the flag code of India.

Part two of the flag code of India, that is, “hoisting/display/use of national flag by members of public, private organisations, education institutions etc”, clearly says that the flag salutation will be followed by the national anthem and the parade will be kept at the attention during this part of the function.

In the Palakkad function, Vande Mataram was sung immediately after the flag hoisting. It was when the chief guest proceeded to another hall to inaugurate a lab in the school that some of the organisers took note of the mistake and then only the national anthem was sung.

“There were almost 800 people present for the function, predominantly Sangh Parivar workers and sympathisers. The pupils in the assembly were singing ‘Jhanda ooncha rahe hamara..’ after he hoisted the flag. Then the national song followed. When after that he was about to leave for another inauguration on the other side, an organiser pointed out the shortcoming of the function,” says S A Ajims, the reporter of a vernacular television station who covered the event.

“The fact is that Mohan Bhagawat has not only violated the Government of Kerala circular on the conduct of Independence Day celebrations, but he has intentionally broken the Flag Code of India and insulted the national anthem,” alleged CPI(M) leader and the MP of Palakkad, M B Rajesh. “The act was intentional, aimed at creating provocation. As peace and normalcy is prevailing in the state the RSS is not happy with it. Now it is shocking that its chief himself is trying to ignite provocation and disrupt peace. How can the RSS Supreme stoop to such low levels,” said Rajesh in a Facebook post.

On the other hand, the BJP leadership has rallied behind their ideologue, saying that the whole episode was part of a wider conspiracy. BJP state general secretary K. Surendran in his Facebook post said that action should be taken against the chief minister’s office, which conspired to disrupt the Independence day celebration attended by Mohan Bhagawat.

BJP state unit president Kummanam Rajasekharan said that Mohan Bhagawat had not broken any rule as the function was held at a private management school. He believed that the management has the right to decide how to celebrate Independence day, ignoring the specifications of the flag code of India.

Although the CPI (M) district leadership has called for stringent action against the school management, the government is yet to make a move. Interestingly, the district collector who acted upon the government directive has now been transferred from the post. Even though the government claims it a routine relocation, it has not gone down well with the CPI(M) cadre.

“The RSS was setting a trap, provoking us to arrest its supreme leader, so that their foot soldiers could have a field day across the state in the name of protest, but this time we did not play in to their hands,” said a top CPI(M) leader, pointing out how the government foiled the RSS’ attempts to polarise the political environment by unnecessarily flouting the flag protocol.